Freshman Garrett Burhenn was not only good, he was better than expected – dominating with a 1-hit shutout in his freshman debut.  Buckeyes move to 2-0 with 6-0 win over Seton Hall.

But that was exactly the story of the game in the second of the Buckeyes’ three-game series Saturday – pure pitching dominance – in a tidy 6-0 win over Seton Hall to improve to 2-0 on the weekend, the season, and in the hearts of those worried about how the Buckeyes young pitching would acquit itself this early.

But get this.  How many freshmen could claim better:  Eight innings pitched, one hit, no runs, six strikeouts, no walks, and just 79 pitches thrown – 58 of them strikes.  By the sixth inning there were rumblings and mumblings around the Seton Hall dugout.  “Who is this guy?” a frustrated Pirate asked.  “He’s hitable.”

Well, actually…no!  The only Pirate hit came on a slug bunt single to third base in the top of the fifth by catcher Jerry Huntzinger.  And on the next pitch Burhenn rolled a 4-6-3 double play to clean up matters…and there you have it.  The only other base runner he allowed came on an error by shortstop Noah West in the second inning.  All in all, a pretty tidy day’s work.

“He was really good, and no…we didn’t expect a one-hit shutout from him,”  said Greg Beals with a smile, afterwards.  “We have confidence in Garrett, but I can’t say we saw this coming in his debut, and he faced the minimum.  Just a week ago in a scrimmage he went 2 2/3rds on 50-some pitches, and today he goes eight innings on a pitch count that’s between 80 and 85, a mark that we had set for him.  But he was cruisin’.  He was really good today.” 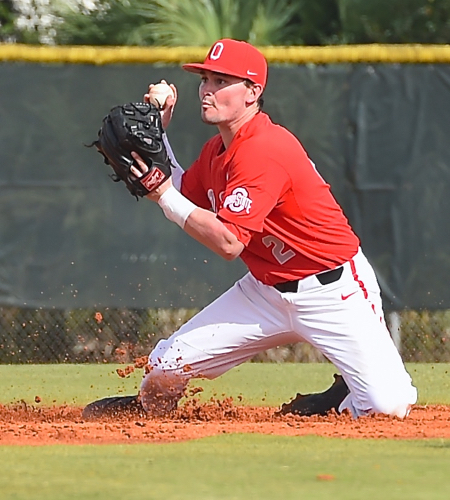 Kobie Foppe and the interior defense was supportive of a good pitching effort for the second day in a row.

And credit to Seton Hall starter Noah Thompson, who pretty much matched Burhenn pitch for pitch after giving up a first-inning run to the Buckeyes on a hit batsman (Foppe), a base hit by Dom Canzone, a walk to catcher Brent Todys, and a sac fly to right field by first baseman Conner Pohl.  1-0, Buckeyes, and from that point until he came out after the sixth inning Thompson cruised, as well.  His only other run surrendered came in the bottom of the sixth when Brady Cherry picked on a fastball and drove it out to left center for his first home run of the year, and a valuable (at the time) insurance run for Burhenn.  Thompson would exit after the inning having given up 2 runs on 4 hits, striking out 10 and walking 2.

But the story was Burhenn, a 6’4″, 210 pounder with a two-seam fastball that routinely reached 91-93 miles per hour on the home plate radar guns…and a command of three pitches that simply had the Pirates’ number.

“He showed that all fall,”  said Buckeye shortstop Noah West.  “But to come out here today and pitch like he did today…that’s a bad man right there.  Just comin’ out as a freshman and doing what he did on his first start.  I’ve never seen anything like that.” 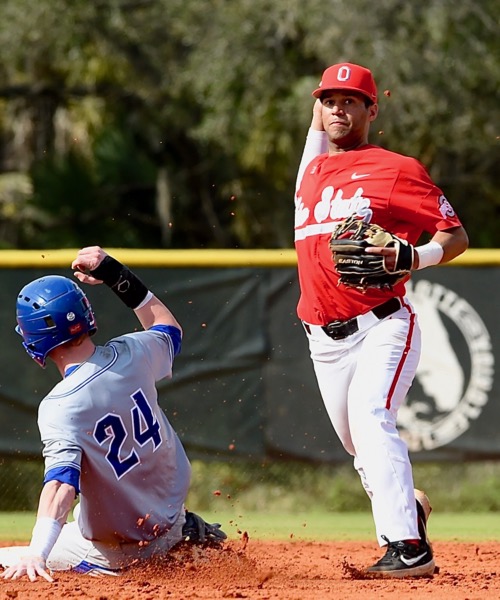 Noah West turns the double play to eliminate the only hit surrendered by Garrett Burhenn.

Greg Beals likes to talk about ‘clean’ baseball – the combination of efficient pitching and sound, tight defense in support.  Burhenn made the game simple in that respect.  And with the exception of the one ground ball error in the second inning, the Buckeyes were nearly perfect defensively for the second day in a row.

Good baseball teams score up and down the lineup, and Saturday’s win gave glimpse to an ability to score outside the normal thunder and lightning expected from Canzone, Pohl, and Dillon Dingler, who sat the game in deference to Brent Todys behind the plate.

Saturday it was Cherry, with a bomb to left in the sixth and a pair of hits on the day.  And in the seventh they added an insurance run on a pair of walks by Pirate reliever Cole Patten…and a double to right by Todys that was lost in the sun to score freshman third baseman Marcus Ernst from third base.

In the eighth, a little thunder and lightning, but not from Canzone or Pohl.  Cherry singled for his second hit, and Noah West followed with a rocket shot from the seven hole that cleared the center field fence by twenty feet to extend the lead to 5-0.  Then Ernst lined a double to the gap in left center for his first collegiate hit, and Malik Jones drove him in with a single off Hunter Waldis, the Pirates’ fourth pitcher of the day. 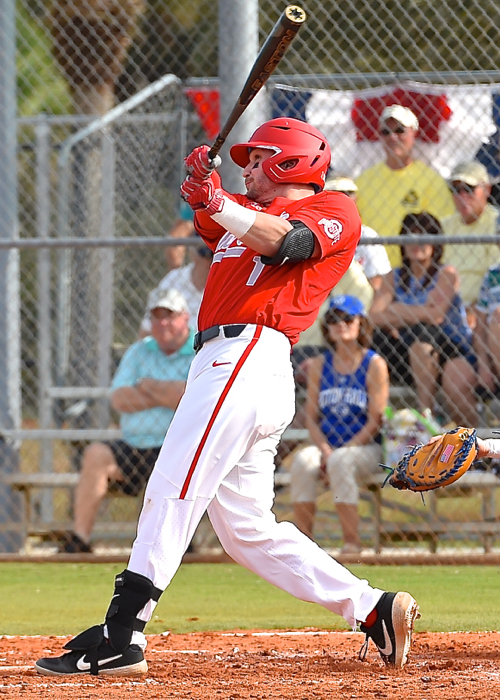 Brady Cherry eyes his sixth inning home run as it leaves he park.

Seton Hall lost it with no runs on 1 hit, they played error-free baseball for the second day in a row, and left just 1 man on base!

There was no thought to a complete-game shutout, as sophomore lefthander Andrew Magno came on for OSU in the top of the ninth, faced four hitters, struck out one, and threw 12 strikes in 18 pitches to wrap things up in a neat 2 hours, and 9 minutes.

With his performance Garrett Burhenn certainly gave credence to the prospects of what’s possible (at least from a competitive standpoint) on day to day basis for this 2019 season.  Pitching is a matter of command, confidence, and a willingness to compete.  It’s no perfect science, but what Seth Lonsway and Burhenn showed on back-to-back days is heartening.

“I certainly didn’t expect to come out and throw a one-hit shutout,”  said the Indy native.  “Going in I was trusting ‘Staff (pitching coach Mike Stafford) to call a great game, and the runs I got early really helped me.  I was just trying to do what I do best and pitch with the lead.  I was sitting in the dugout between innings with my face in a towel, telling myself to just pitch with the lead and do what I do best.” 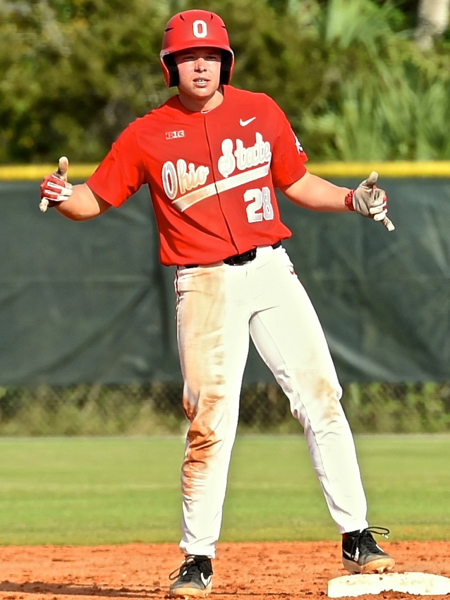 Marcus Ernst celebrates his first collegiate hit, a double in the eighth.

His command was impeccable.  Everything he threw was dialed in and with a purpose.

“I just trusted my stuff and tried to live low (in the strike zone),”  he added, quietly.  “I was able to command both sides of the plate pretty well, and I think I had a better than average fastball today.  I just tried to play baseball and let the team do the work behind me.  I was happy to do my job.”

And that was it.  He’d rather pitch than talk, but Beals was more than happy to remind others with some words of his own.

“I told you back in the fall that Garrett has showed maturity beyond his years, and that’s what you saw today – a great way to start his career.  But I’m pleased the most with how clean we’re playing,”  he added before boarding the bus for the hotel.  “We gave up a hit batsman and an error today – no other bases allowed.  They got one hit on an infield chopper.  But the key is we’re taking care of the baseball, and supporting our young pitchers with good defense.

“And, I’ll mention Marcus Ernst because he made his first collegiate start at third today, got his first hit, and had two plays right out of the chute hit to him in the first inning, so that proves you can’t hide in this game.  He’s worked really hard and has earned the respect of his teammates, and we were excited for him to play today.”

But the smile behind Beals’ Foster Grants was really about his freshman pitcher, and the kind of confidence HE instilled in his teammates.  People in official scarlet and gray were pinching themselves Saturday, and Greg Beals was at the head of the line.

Like Noah West said:  “Just comin’ out and doing what he did on his first start.  I’ve never seen anything like that.”

Notes:  The Buckeyes wrap up their three-game series with Seton Hall tomorrow (Sunday) at noon.  Junior righthander Jake Vance gets the start.  Vance is coming off a sophomore season of 4 wins, 3 losses, and a 4.25 earned run average. 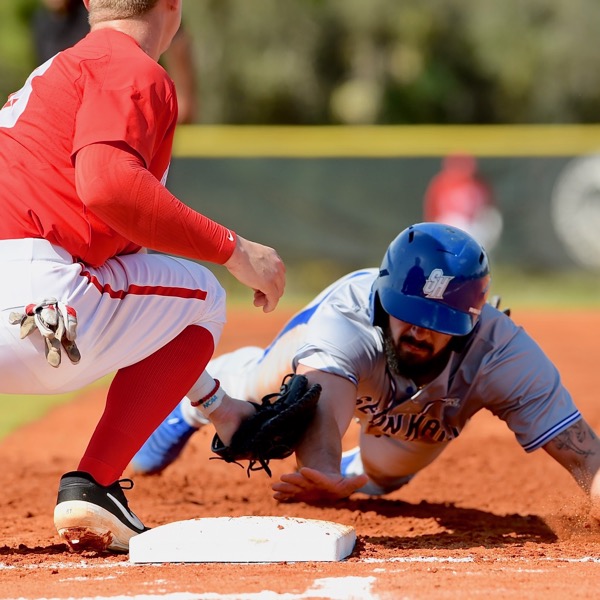 Conner Pohl applies the tag at first to pick off Sebastian Santorelli in the second inning. 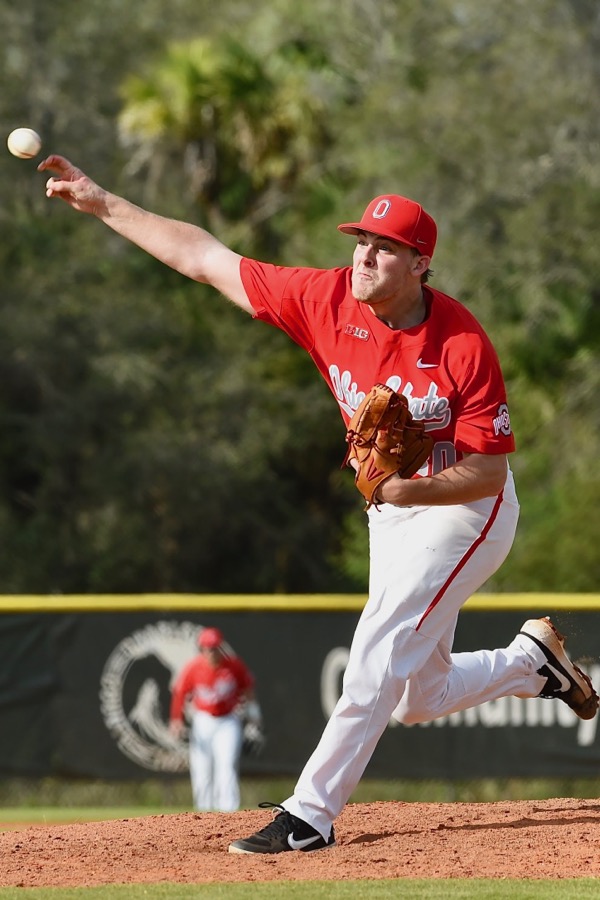 "To come out here today and pitch like he did today...that's a bad man right there." - Shortstop Noah West on freshman pitcher Garrett Burhenn (Press Pros Feature Photos