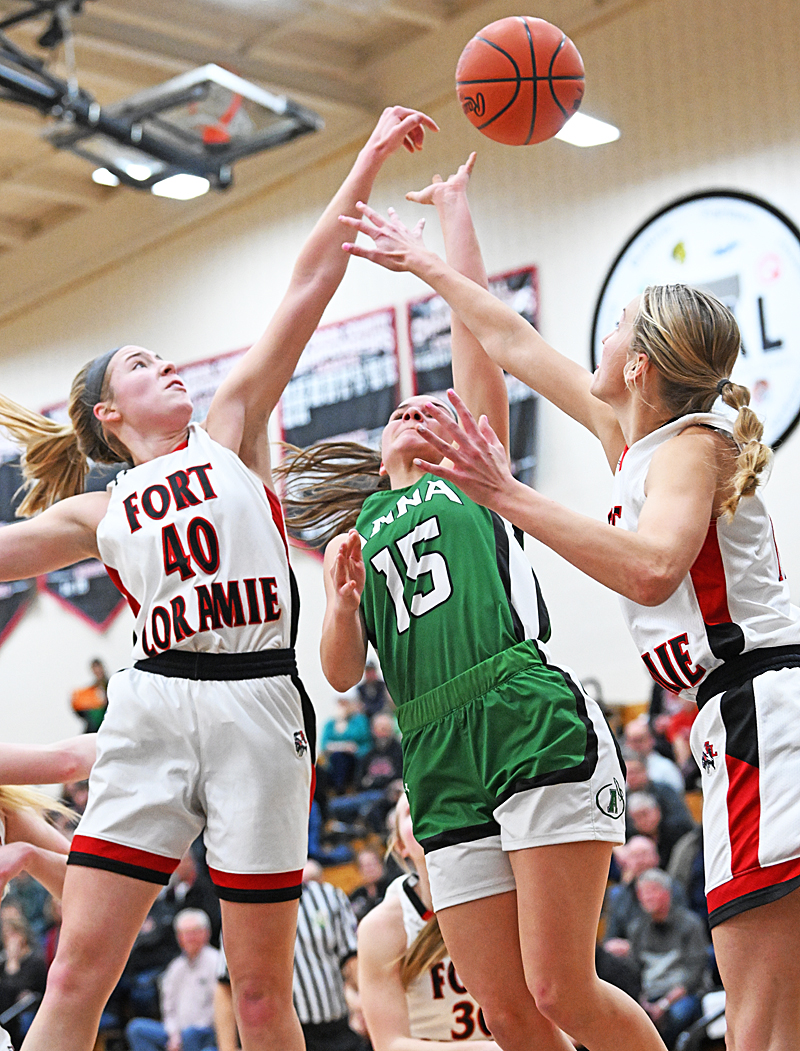 It wasn’t their prettiest wins, but it was a win.  Fort Loramie struggled at both ends of the floor, but did enough to get past Anna and remain unbeaten.

Fort Loramie, OH – At times it looked like the basketball equivalent of ‘connect the dots’, where you move things around and see what you come up with – totally unpredictable.

Head-shaking, in fact, as Fort Loramie coach Carla Siegel tried to explain how her undefeated Redskins (11-0, 6-0 in SCL) somehow got past Anna (6-6, 2-5 in SCL) Thursday night, 38-32, to remain unbeaten atop the Shelby County League standings.

Siegel has seen it all over the course of three state championships and 502 career wins at Loramie, and acknowledged at the end…”we’ll have to play a whole lot better if we’re going to beat Ottawa-Glandorf on Saturday.”

The Redskins were flat on defense…stagnant on offense.  They looked lethargic trying to employ their customary pressure on the basketball.  They missed more bunnies at the rim than Elmer Fudd.  And they shot a miserable percentage in the fourth quarter from the foul line that would provided some cushion and a modicum of confidence for the weekend. 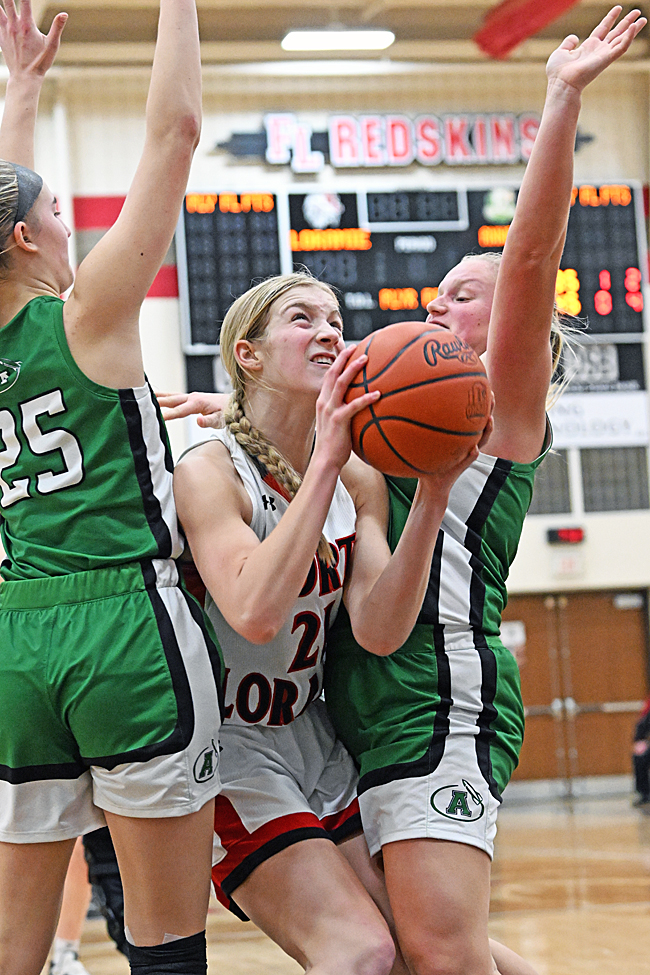 Anna’s defense clamped down on Victoria Mescher during first half action of Thursday’s Loramie win.

“Anna’s not a bad team, they were 6-5 before tonight, and they work hard.  But we pride ourselves on playing defense and our half-court defense was non-existent tonight,”  Siegel said, flatly.  “I didn’t like our ball pressure, our rotations, how we trapped…we let them dribble out of it, let them dribble through it.  When you pride yourself on defense and you don’t do it, everything else just crumbles.”

Loramie missed their first three shots of the game, all within five feet of the basket, and failed to get an offensive rebound off any of the three.  Anna claimed the ball and raced to the end of the court, where they didn’t score…but importantly, when they had the ball Loramie couldn’t score, either.  It took Loramie three minutes to finally get a shot to go down, Anna conveniently played down to that same level of execution, and the two teams were tied at 8-8 by the  end of the first quarter.

“I don’t know if the girls felt pressure, or what,”  added Siegel.  “We just never got it going.”

The one notable exception, and in fact their savior, was Avery Brandewie, who somehow plowed through the muck to score 11 first half points and post the Redskins to a robust 20-13 lead by halftime. 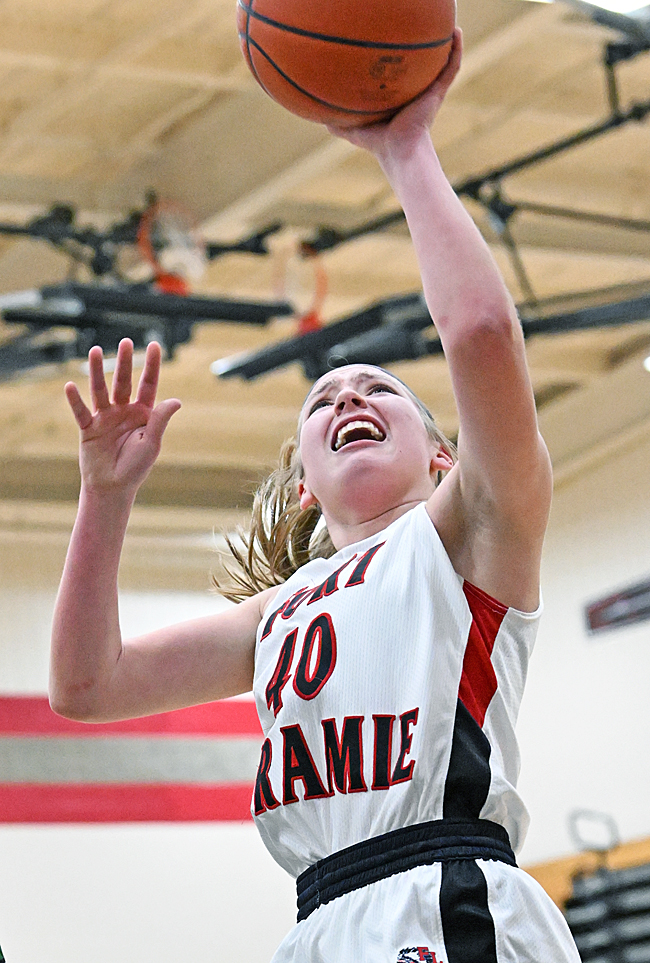 They got it going better in the third quarter, scoring off a couple of empty possessions by Anna to go up by 12 points, but a pair of three-pointers by Anna’s Taylor Poeppleman, her only buckets of the game, quickly hacked the lead back down to single digits.  Loramie’s Skylar Albers came to life, scoring 7 points on a pair of baskets and a three-pointer, and the ‘Skins led by ten, 31-21, after three.

Still, they couldn’t pull away from the Rockets, who didn’t have a player on the floor taller than 5’9″.  And while Loramie continued to play basketball by braille in the fourth quarter, Anna’s Ava Reed (four points off free throws) and Brenna Cobb’s pair of buckets accounted for enough offense to keep the Rockets within a 3-pointer of really making it interesting.

Compounding things, the Redskins made just one of nine attempts from the foul line in the final eight minutes…to play right into a possible Anna comeback attempt.  The Rockets came up short, despite outscoring Loramie for the period, 11-7.

“They never gave up,”  said Rockets coach Randy Huber.  “Loramie is so talented, but our girls just kept pecking away.”

Anna had seven different players score, led by Brenna Cobb’s 11 points.  Taylor Poeppleman had 6, and Jadyn Huber and Ava Reed each had 4 points to pace the Rockets’ scoring.

For Loramie, Avery Brandewie made the most of her 11 first half points, finishing as the game’s high scorer with 15 points…15 points that made all the difference in the ‘Skins remaining unbeaten, and keeping their 55-game home winning streak intact.  Skylar Albers added 9, Ava Turner had 8, Victoria Mescher had 4, and Summer Hoying finished with 2 points. 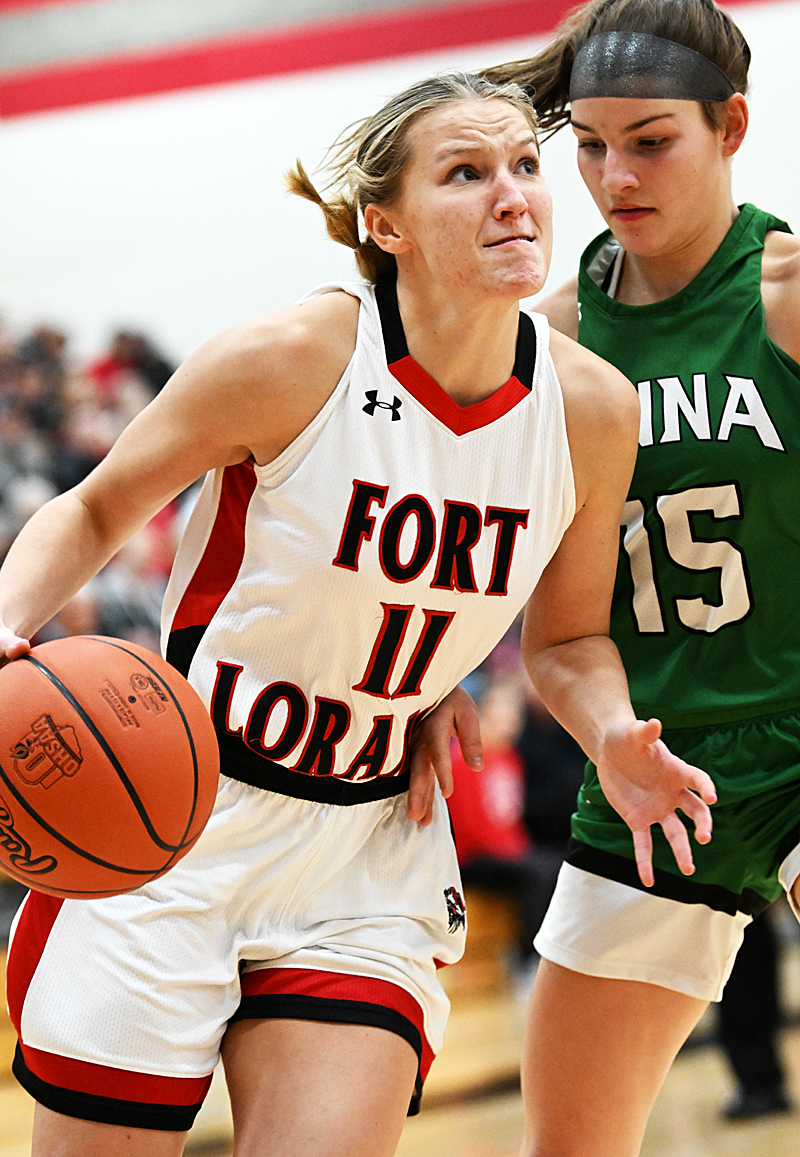 “I thought we had turned a corner with working together, making the extra pass, and doing the things that make us the best that we can be,”  Siegel surmised before leaving the gym.  “Tonight we resorted to people doing ‘I’m going to do what I need to do to score’, and we’re not effective that way.  We talked about it at halftime – making the extra pass and running the offense through – but we were just stagnant.  Our half-court defense was bad, and our half-court offense was stagnant.  We weren’t efficient and we weren’t smooth.

A win, and hopefully plenty of motivation to improve before Saturday when Ottawa-Glandorf (9-2) comes to town for an afternoon matinee.

“They’re a phenomenal team,”  credits Siegel.  “They play nine, and they’re very reminiscent of my team two years ago – full-court pressure, running, transition baskets.  We’re going to have to play a lot better than we did tonight.”