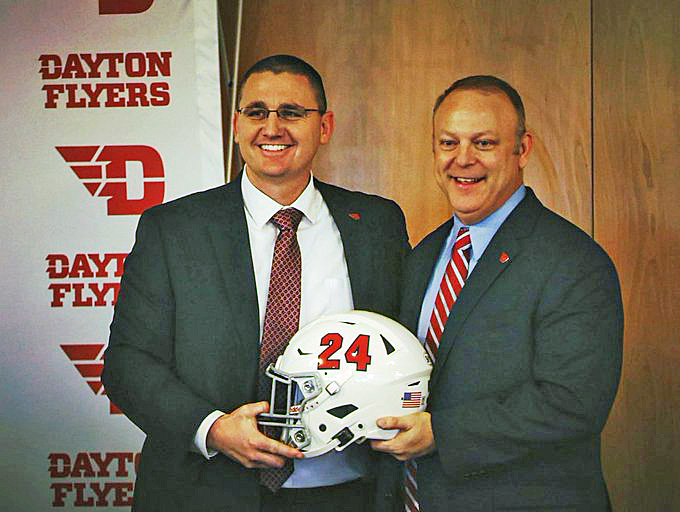 Dayton’s new football coach comes with background, enthusiasm, and the blessing of those who’ve held the job before him, Mike Kelly and Rick Chamberlin.  What remains now is the expected winning transition.  (Photos Courtesy of UD Sports)

“Are you ready to be head football coach at the University of Dayton?” Sullivan asked.

“Do you seriously have to ask me that?” said Andrews.

And on a cold, drizzly afternoon outside UD Arena, Andrews was introduced as only the third head football coach at Dayton since 1977.

He follows Mike Kelly and Rick Chamberlin and he played for both in the late 1990s, for head coach Kelly and for defensive co-ordinator Chamberlin.

He is a man’s man, but isn’t afraid to let his emotion stray publicly, as he did several times, coming close to tears during his acceptance speech.

Both Kelly and Chamberlin were in the Boesch Lounge and at one point Andrews said, voice cracking, “Coach Kelly…I love you, man. Coach Chamberlin…the same.”

His voice cracked between each word and he rubbed his eyes and said, “I never thought I’d do this (cry). I wasn’t nervous to come in here because of the family atmosphere we always have at UD.

“My emotions have taken over, but that’s just how proud I am of this place,” he said. “Those guys (Kelly, Chamberlin) are my roots.”

This is Andrews’ first head coaching job after 18 years as an assistant coach at William & Mary and the last four years as linebackers coach at Western Michigan.

Andrews, 47, was a three-time letterman for the Flyers as a defensive back as UD won three Pioneer Football League championships. The Flyers were 37-4 during his four seasons wearing a Dayton uniform.

Even though he had accepted the job, he didn’t grasp the full effect until he walked into retiring coach Chamberlin’s office, the office that will be his. 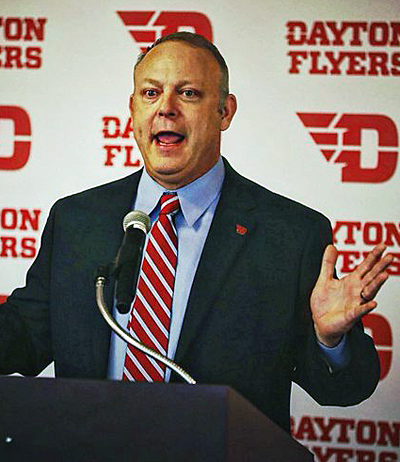 “My most surreal moment was when I was taken into Coach Chamberlin’s office.  We had a moment there that I will never forget.”  – Trevor Andrews

“My most surreal moment was when I came down and went through some logistical things,” he said. “I was taken into coach Chamberlin’s office and we had a moment there that I will never forget.

“Not a lot of words were said, but it was very meaningful to me (voice again cracking). A lot of words didn’t need to be said and I’ll never forget that moment. It was one of those things where, ‘OK, it’s real now and let’s get going.’”

Andrews is realistic enough to know the pressure is on because of the success both Kelly and Chamberlin had and the high expectations in the program.

He is following two legends.

“The reason I got into coaching was because of my experiences at UD,” he said. “Mike and Rick showed me the way and made me want to help young men have the kind of experience that I had playing college football.

“When I let myself think about it, I came to realize that coaching at the University of Dayton was my dream job.”

It no longer is a dream for the father of four and son of a life-long high school football coach, “Which means I’ve been on a football field since I was four-years-old.”

“It is humbling because those are two guys I looked up to,” he said. “They helped me find my footing. The first time I went to the coach’s convention, coach Kelly took me around and introduced me to people. And I slept on the floor in his hotel room.”

Of following legends like Kelly and Chamberlin, Andrews said, “If you stop and think about that…well, I know what we have here and I know what is expected of this program. That’s what makes you want to come here, you want people who want that. You never want to settle for mediocrity.”

“I’ll take little pieces I learns at William & Mary and Western Michigan and work to stay relevant and stay on top of the game, stay cutting edge” he said. “We don’t have to have all the bells and whistles…we don’t need to be in fads. We’re going to be sound and solid and we’re going to have fun with it.

“That’s the biggest thing for me. I want our guys to compete like crazy and work to get better in every facet,” he added.

What can fans expect to see on the field under Andrews?

“You talk about x’s and o’s, but really it is what are your fundamental cores that you want to see. I want to have a team that is fun to watch, that’s the first thing,” he said. “If it is fun to watch, it is fun to play in. We want schemes that the kids enjoy, that they can play fast and free. Everybody wants to see explosive plays and sacks, right?”

As he wound down his time behind a podium, he said, “I’m going to be dedicated, I’m going to be committed and we are going to hold the guys accountable, and that’s what they want.  And we will do it with transparency and honesty.”