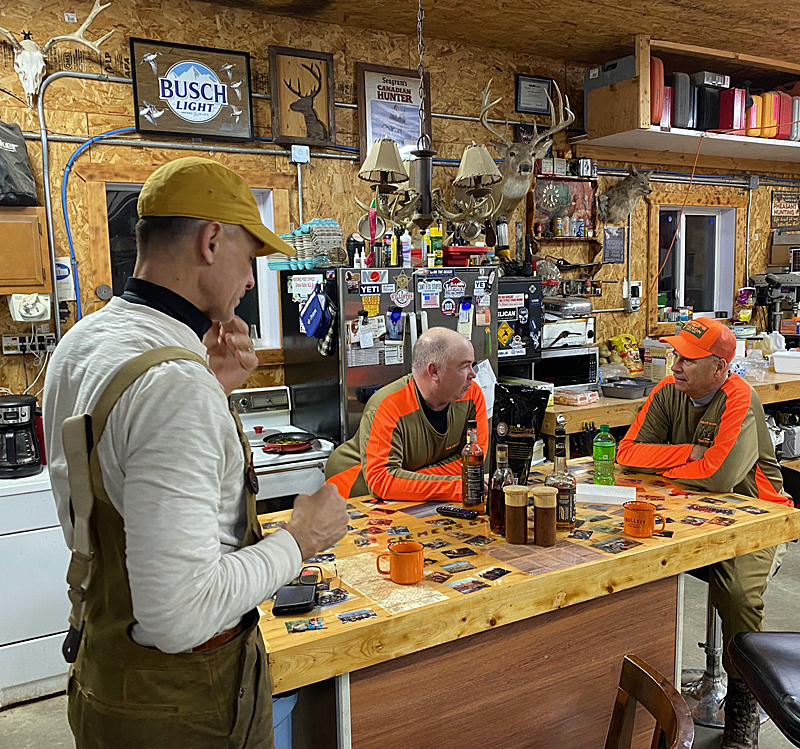 For those concerned about the issues of mainstream culture, pay some attention to how the other half lives in North Dakota…which is worth noting if you can appreciate a simpler, more realistic life.

Noonan, ND – Yes, I spent a couple of days this weekend in Noonan, North Dakota, population 137.

I came for the hunting, as friends Pat Jewett and Kreg Huffer and I have enjoyed in recent years simply because…there is wildlife here, and there are very few people.  In fact, Noonan is as close to 19th century great plains America as you’ll ever find, had they had electricity back then.

A Saturday night out in Noonan is dinner at Bootleggers Bar, where the steaks and prime rib really are ‘prime’, and dinner for four, with tip, and endless refills, is only $150. 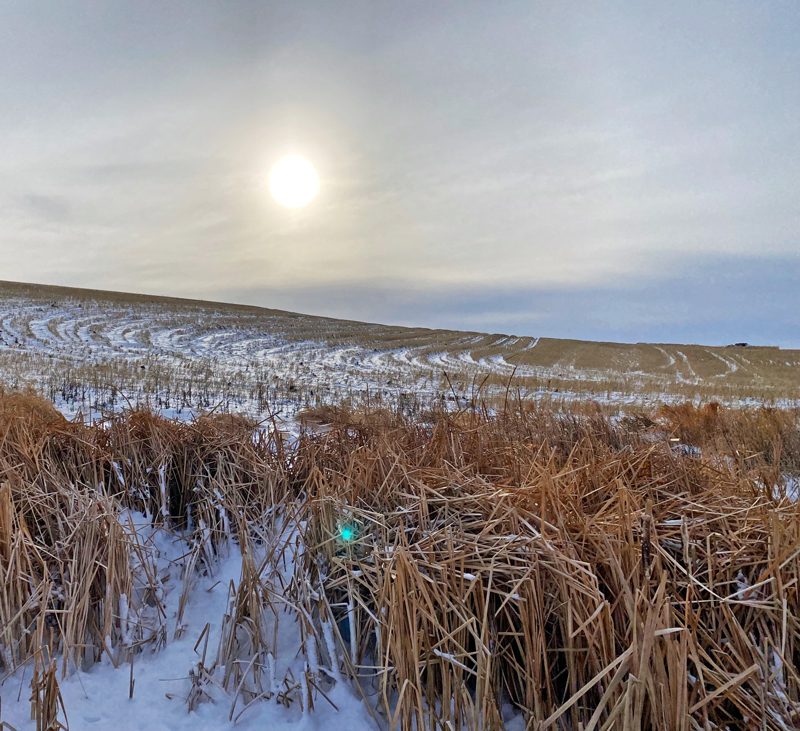 There is nothing more special, or more natural, than landscape without people, or  culture…like it used to be.

But first, to those like Press Pros reader Ray Adams, who writes to say he enjoys hearing about the days of bird hunting in Ohio when there actually were wild pheasants…we did fine this week outside Noonan.  Understand, that a day before we arrived it was 21 degrees below zero.

Friday the high was 20, and Saturday it reached a balmy 26, and always with a cold wind from the northwest.  Noonan is just twelve miles from the Canadian border.

The best part…it was bright and sunny.  They had snow here a few days prior to the 21 below, about a foot of it, and the combination of open weather and snow makes pheasants wild and unpredictable, whereas bad weather (storms) makes them group up and easier to hunt.  Translation:  it requires a lot of walking if you want to shoot birds, and we got our share after 20 miles of sub-freezing, snowy physical work.  No one seemed to mind.

Ray, we made a few shots – that 60-year-old Model 12 worked just fine.  The dogs, Winston and Aspen, pointed and retrieved as if their heritage was at stake.  We really worked for 24 birds, just like the old days.

But what impressed me more about Noonan this week was the attitude, the hospitality, and the patience of the people who live here – people like Monte and Deb Glasoe, who own the only true restaurant in town – Bootleggers.  It’s not Ruth Chris’s, hardly a destination, just an appreciated community resource where the locals come not only to eat, but to support one of their own.

The food was fabulous, and affordable.  It has to be in a state that only has 742,000 people.  The hospitality was priceless. 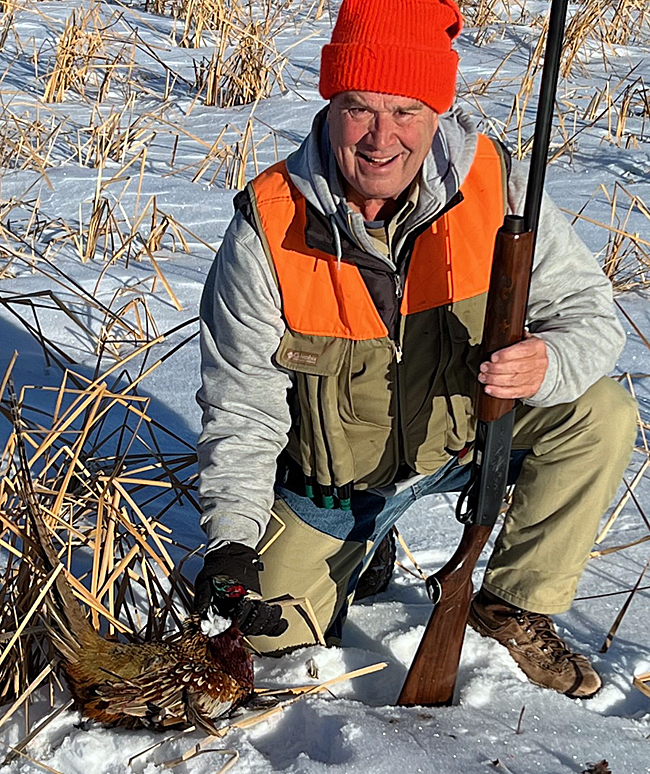 We once came for the hunting. Now there’s appreciation for those who simply live here, and persevere despite the neglect of culture.

“This is where we come to eat, relax, and check on everyone,”  said a patron on Saturday night.  “We need them, and they need us.”

We attracted a crowd, as out-of-towners stick out like a sore thumb – questions about where you live, what you do, and why you would take the time to come to Noonan.  Before we left we had met almost everyone in the restaurant and knew something about every one of them.

North Dakotans are about as ‘real’ as they come.  Everyone works, makes their own way…because that’s what they know.  It’s how they were raised.  There’s plenty of discussion about inflation, as this is ranch and big farm country.  Prices are high, and people are hurting.  Still, they persist.  No one whines.  It is what it is, the by-product of the inefficiency and imbecilic leadership in Washington, and the discouraging reality that those who work to feed those who don’t is taken for granted.

And yet, they exist, without complaint about inclusion, equity, or fairness.  There’s nothing fair about -21 degrees, or the loss of ten thousand construction jobs when the Keystone Pipeline was canned by the current administration.  You just adjust. 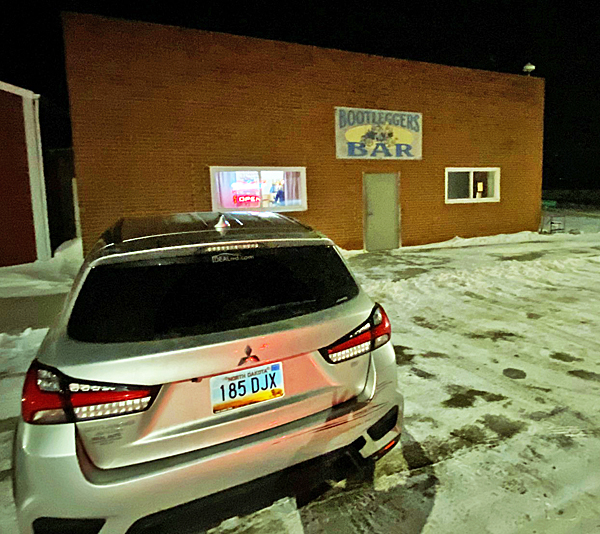 Where the locals meet, eat, and support each other in Noonan, North Dakota.

They were adjusting at Bootleggers on Saturday night, if only the two dozen locals that we met.

Deb Glasoe is facing life-altering surgery at the Mayo Clinic, in Minnesota, in January, and that was a topic of hope and expectation.

Grain farmer Grady Bakken was concerned about fertilizer going from $350 a ton to a $1000 a ton in a span of two years.

No complaints, and no quitting in North Dakota.  It’s not an option.  No one here relies on ‘fair’.

“If you’re coming up next year I’ll have some good ground for you to hunt on,”  said a patron who approached me as we left for the evening.

People who cared, and appreciated those who care about them enough to ask about how things are in North Dakota.  It’s not Washington, it’s not California, or New York.  It’s the irony of working so hard to exist, while providing for those who barely acknowledge they’re there.

It isn’t fair, but ‘fair’ doesn’t pay their bills.

There’s a lesson here that would serve the rest of us well.  I used to come for the hunting.  Now…I appreciate the reality! 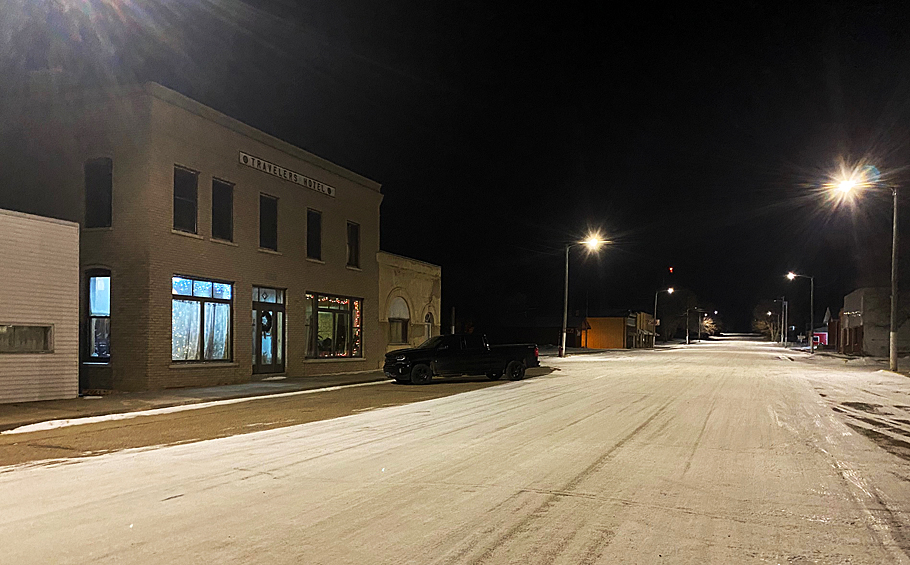