Commentary: What We Saw This Weekend (in Canton) 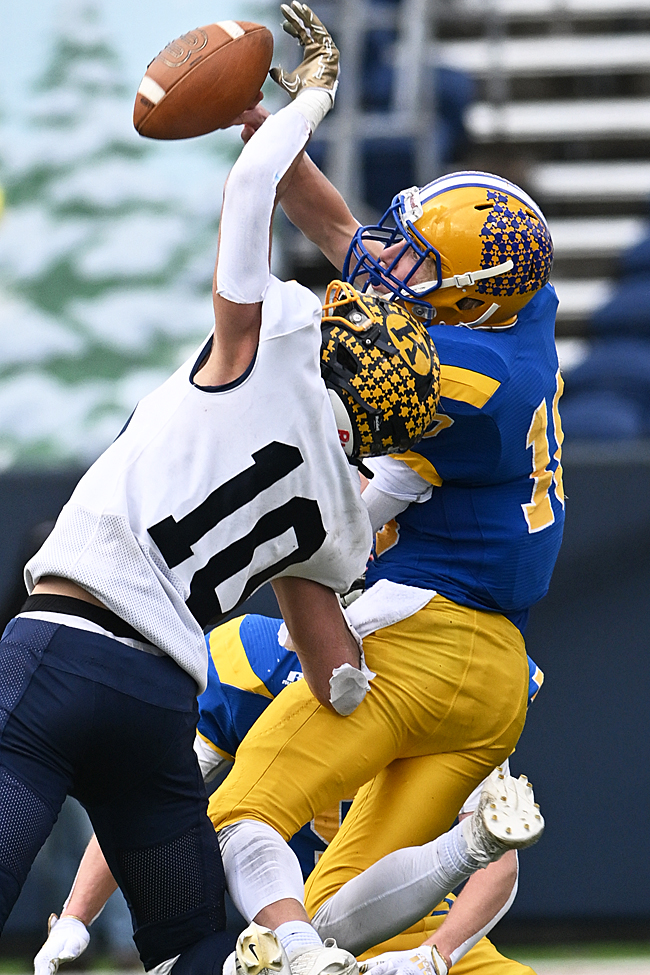 The Canton newspaper called Marion’s quarterback, Tate Hess, their ‘Player of The Game’ for managing enough offense to win.  But what he meant to the Flyers on defense (above) was just as noteworthy.  (Press Pros Feature Photos)

Put the helmets away, along with any notion that anyone – everyone – can win a state title in OHSAA football…if they’re just given a chance.  We saw, heard, differently first-hand, in Canton.

I’ve enjoyed doing this review throughout the 2022 fall season on what we’ve observed from the previous week;  but never more than what I discovered through some face-to-face sleuthing at this past weekend’s state football finals in Canton.

With hats-off respect and admiration for Marion Local winning its 13th football title, and New Bremen for winning its second…and for Springfield, who came up short in a 28-14 loss to Division I behemoth, Lakewood St. Ed…to Bloom-Carroll, who dropped its Division III title shot to a better Canfield team, 35-14…and to my boyhood home district from Ironton, who fell in the Division V game to South Range, 53-27…what I saw in all seven divisions was the manifestation of what I write annually about sports like football…and particularly football!

I wrote back in August that from my view attempts to spread the wealth of post-season playoff experience through expanding the regions were mere window dressing.  It brought a voice of disapproval from some who wrote, or told me to my face, “More schools could win a state title if they’re just given a chance” … but I didn’t see any of that this weekend.  What I saw was something else that I wrote about in August:  The rich seem to get richer, while those who don’t seek to change the rules!

What Marion Local displayed in winning its 13th title, in beating Kirtland in the much-anticipated Division VI title game, was something that inclusion and added participation cannot touch.

What New Bremen did, and the way they did it, to a ‘wise’ Warren JFK team (38-6), cannot be replicated by saying if you just love something enough – want it enough – dreams do come true.  That’s not realistic, either.

What was demonstrated by each of the seven state champions over the weekend was a culture of competition, commitment, and I-want-it-more-than-you-do survival that’s seldom seen in programs that catch lightning in a bottle for one year, then take another generation to rebuild.

On the way to the post-game ceremonies on the field Saturday evening, I bumped into a Warren JFK representative (coach, perhaps), and asked him if the Eagles had been wary of New Bremen in their preparation, given that the same team had shut them out just twenty four months earlier, 31-0? 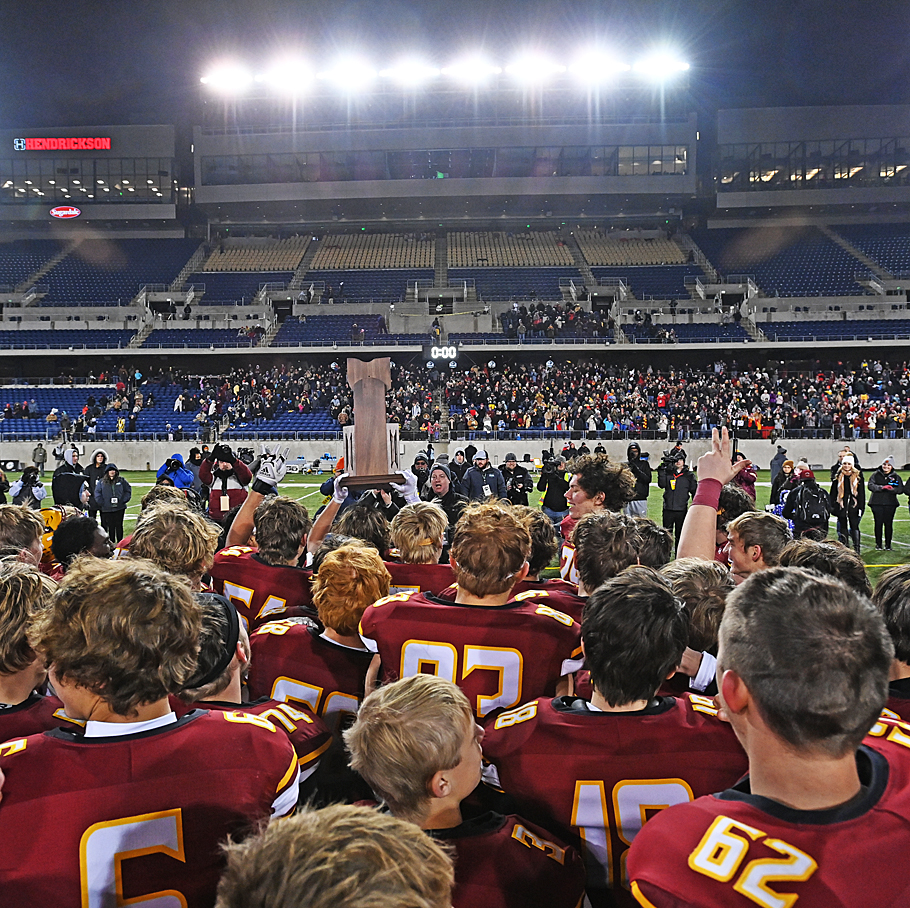 New Bremen hoists the title trophy before the hometown crowd after taking down Warren JFK for the second time in three years, 38-6.

“I’m not sure how to answer that,”  he answered.  “But you don’t see many teams where every time they snap the ball there’s a chance they’ll make a dynamic play.  Our kids came out a little flat, [New Bremen] jumped on them early, and we never recovered from that.”

Kirtland coach Tiger LaVerde said the same things – different words – in respect to Marion Local and trying to move the ball against a defense that allowed just 39 points all year, in 16 football games.

“It was about what we thought it would be,”  he said.  “I think we only had six first downs.  We only punted 13 times all season, and today we had to punt seven times.  That defense is so good…fast, physical, and well-coached.”

Ironton coach Trevon Pendleton was visibly disappointed that his #1-ranked Tigers again came to Canton, and for a third time in his tenure as coach was turned away by a dominant performance, not by Kirtland (who beat Ironton twice previously), but by a title newcomer, Canfield South Range, the #2-ranked team in the state who won their first-ever title in their initial trip to Canton…after two decades of trying.

If that’s all it takes!

Over and over, what we saw at this 51st annual championship weekend was… ‘spectacular’ … both from an individual standpoint (Hoban running back Lamar Sperling, who carried 40 times for 359 yards, and then received an offer from the University of Kentucky), or from a collective team performance.

Marion’s defense, for instance, held Kirtland to just 109 yards on the ground, umpteen times below their regular season average.  And the Canton Repository (newspaper) later called Marion quarterback Tate Hess its Player of The Game, not for his offensive stats (he ran for 9 yards and threw for 52), but for just managing the offense well enough to find a way to win.  Marion had averaged 40 points a game throughout the year.

It’s what Warren JFK coach Domenic Prologo said in describing New Bremen’s David Homan:  “He kinda wills his team to victory. He’s tough to get on the ground. You have to get to his legs to do that. He’s a heck of an athlete.”

He could have said, “He was Sperling-like.”

More than one out-of-the-area reader pointed out our coverage of MAC football, and asked the time-honored question of how they do it year after year. 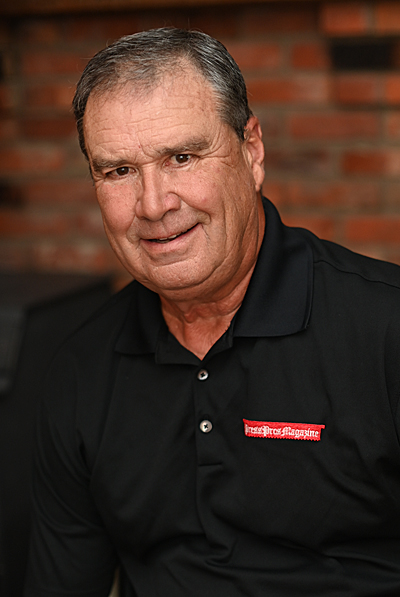 I answered this way:  Hard work, a commitment to winning, and a standard of community expectation.

I saw nothing in Canton over the weekend to make me believe that you can become Don Quixote just because someone says, “You can do it.”  Not everyone sells out for the sake of competition, and those that don’t have yet to find another way.

In reality, there’s only a few that do do it.  Like Wall Street, fortunes aren’t made in a day.

Which makes Chris Schmidt, at New Bremen, a veritable outlier by winning two titles in seven seasons, two in the last three.  But again…the standard.  And some fortunes do come quicker.