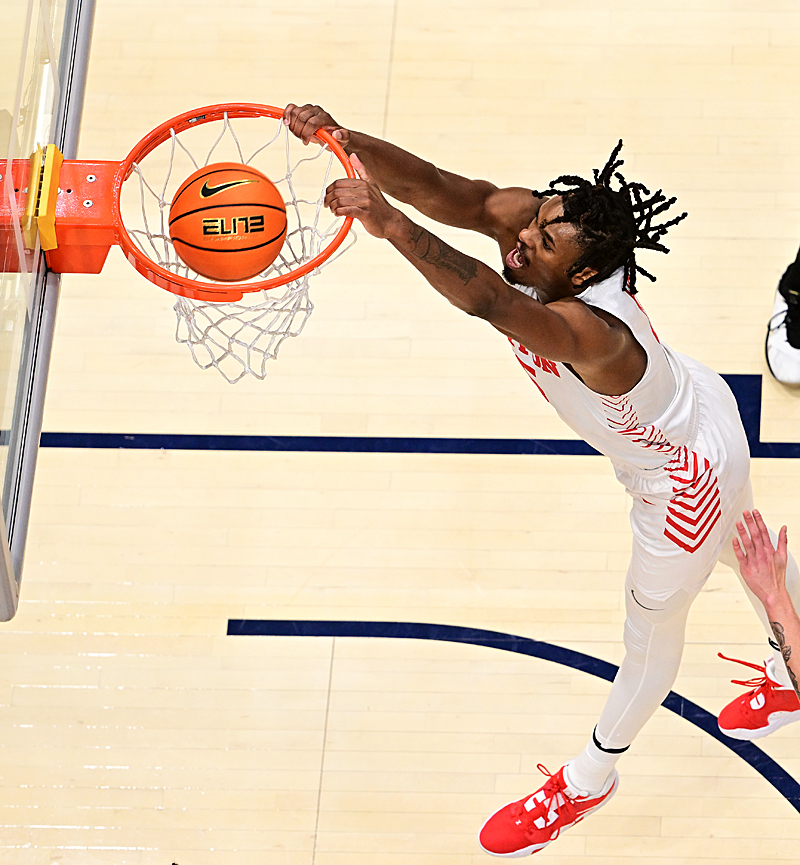 Flyers overcome a halftime deficit to narrowly avert disaster…they won 80-74 against Southeastern Louisiana to go one game over .500.

Dayton, OH — It was nearly a trap game, another of those teams paid handsomely to come to University of Dayton Arena, take their beating and flee town with a fat appearance check and a loss.

It happened three times last year – three games in a row. UMass-Lowell, Lipscomb and Austin Peay all were paid to play the Flyers at the Arena. They not only played and took the checks, they took victories with them.

This time, in a new season, it was Southeastern Louisiana that almost took the money and ran home with a victory. Almost.

If the Flyers saw the Xavier-Southeastern Louisiana score Wednesday, they probably went into relax mode. No need to fret. Easy pickings.

They probably thought it should be an Afternoon Delight for the Flyers Saturday afternoon in UD Arena and their 13,407 fans.

That’s because Xavier took apart Southeastern Louisiana piece by piece and didn’t put it back together again, 95-63,

And while the Flyers are 61st in the Pomeroy ranking, SELA is 295th of 363 Division I basketballs schools. Doesn’t Las Vegas know its stuff. Those guys listed Dayton as 17 1/2-point favorites.

So, Mr. Referee, toss up that basketball while they play Kernkroft 400 by Zombie Nation and let the frolicking begin.

Well, basketball doesn’t work that way and there was proof positive when SELA forced the Flyers to dial up their focus and intensity before UD scored an 80-74 victory

It was UD coach Anthony Grant’s 300th victory as a collegiate coach and it was Toumani Camara’s 100th college game combining his time at George and Dayton.

Camara scored 20 points, but was miffed when he missed two free throws late in the game because he knew if he made one he would have 1,000 career points. 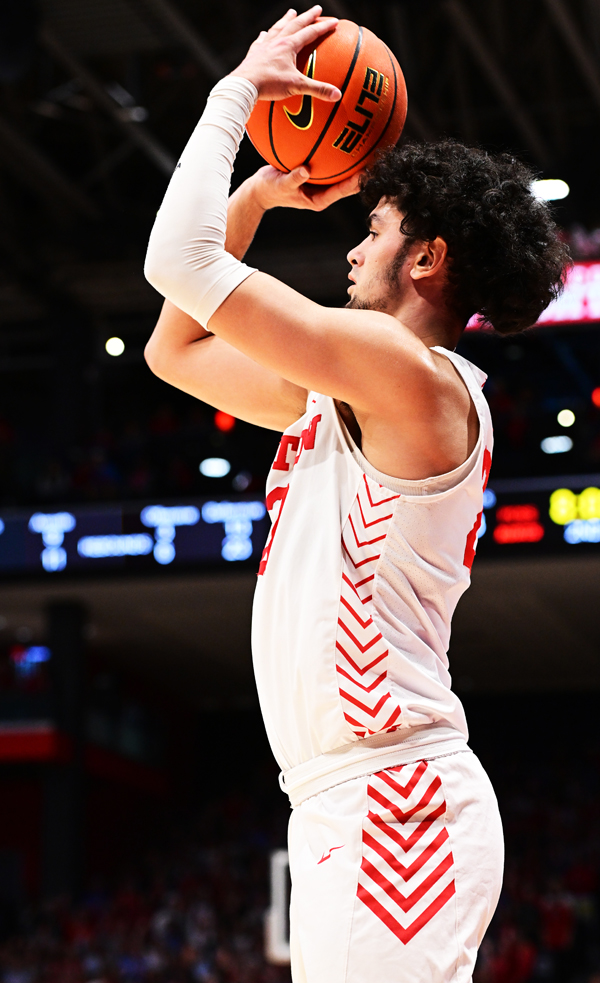 But there was one astounding statistic. With all the injuries, UD’s bench is threadhare and SELA’s bench outscored the Flyers, 41-0.

And listing all those douhle-figure UD scorers is getting ahead of the story, because SELA got ahead in the game.

On Wednesday, the Lions fell in arreras to Xaviere 21-3 en route to having their tails trimmed.

Not on this day.

The Lions did not sleep. Not only did they nip at the heels of the Flyers sneakers the first half, they led at intermission, 38-37.

The culprti was SELU guard Christian Agnew. The 6-1 fifth-year transfer from UTEP, averaging 9.9 a gme, came off the bench to score 18 first-half points on 5 of 7 three-point sniping, most of them coming when the Flyers retreated into a zone defense.

Blakney, UD’s defensive body guard, shut him down in the second half, only two more points. But that didn’t slow the Lions. They led with 18 minutes left, 45-41. And they had it tied, 51-51, with eight minutes to go.

Camara, using his bulk and strength, muscled his way to the basket two straight times for a 55-51 lead, Saravjamts hit a runner in the lane and Amzil hit a three from the left side. It was such a big bucket he did a little dance and waved to the fans as he sprinted down the floor.

Saravjamts completed the 12-point run with another three for the 63-51 lead. 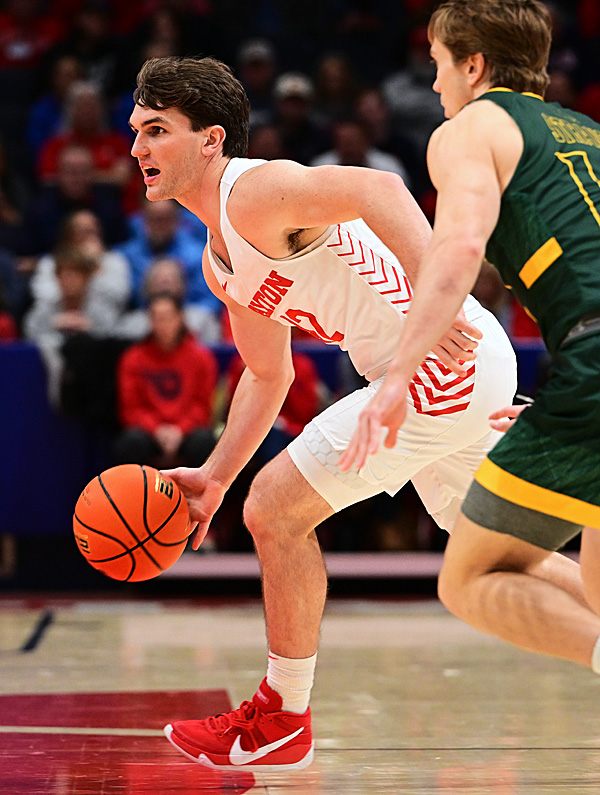 Brady Uhl gets some floor time in the Flyers’ Saturday win over Southeastern Louisiana.

The Flyers made only one basket in the final five minutes, but SELA kept sending them to the foul line, where they made 8 for 16, which enabled the Lions to stay within a short arm’s length.

“If we make our free throwns down the stretch, we pull away and win the game by a bigger margin,” said Grant. At one point, the Flyers were 12 for 13 from the line, but finished 23 for 34.

Grant most assuredly saw the Xavier score. And he knew the 4-5 Lions own a win at Wyoming. And he watched film. So he wasn’t fooled.

“Well, today I thought was a real tough test and credit to Southeastern Louisiana,” he said. “We felt it was a very dangerous team. Right from the jump, they were able to take it right to us and we had to respond.”

Camara said he and his Flyers responded, in the second half after SElU drew their rapt attention.

“They came out with great energy and that’s something that surprised us,” he said. “We can’t allow them to do that. We have to be more consistent on the energy we bring every game.”

It all added up to UD’s 13th straight home victory and a nice milestone for Grant.

“For me, I’ve had the good fortune of having a lot of good players,” said Grant of his 300 wins. “I have a chance to work with a lot of great staff. That’s what I think about. I didn’t know about it until today.

“Yeah, I’m thankful and grateful I’ve been able to do this job long enough to get 300,” he added.

Camara was upset with the two free throws he missed late in the game because he knew what he needed for 1,000.

“My 100th game? It’s huge, it’s huge,” said Camara. “I’m mad I missed two free throws that would given me 1,000 points. I’ve been in college four years and they went by so fast, been through great experiences and enjoyed and I’m looking forward to the rest of it.”

Grant can get his 301st win, Camara can get his 1,000th point and the Flyers can snag a victory Wednesday night that would be a big plus on their resume.

It won’t be easy. It is at Virginia Tech and against Wright State transfer Grant Basile.

“A tough one?” said Grant. “They’re all tough. This one today was tough.”