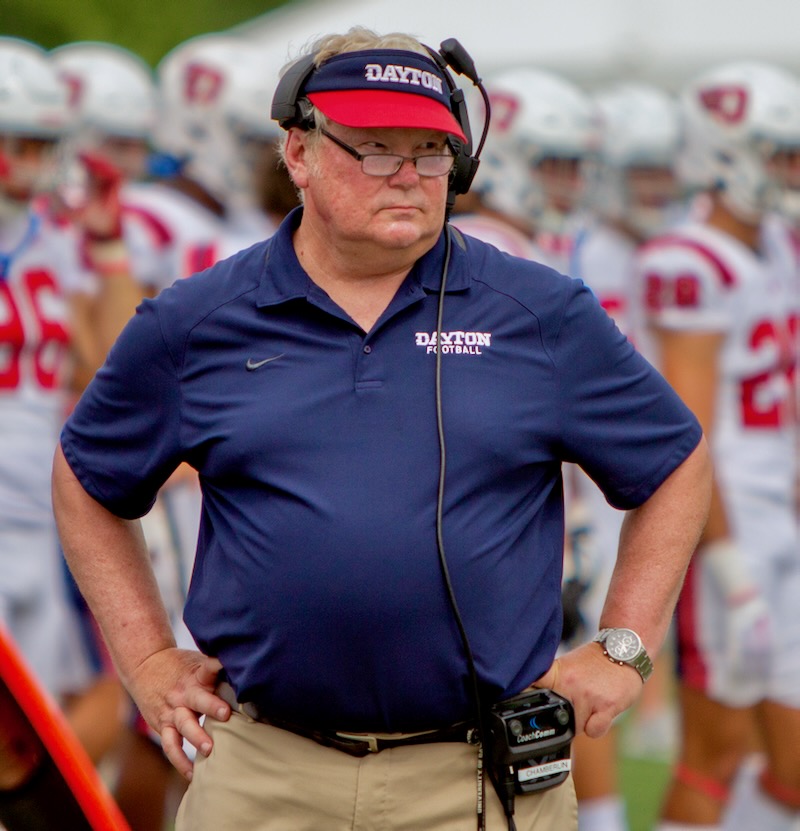 “I was glad no one stood up and cheered,”  said Chamberlin about his announcement this week that he was stepping down.  (Press Pros Feature Photos)

He retires as much a winner off the field as he was on it.  Rick Chamberlin stepped away as football coach of the Flyers this week, and left a legacy of class and decency that may never be matched.

Dayton, OH – In my 60 years of sports journalism, I have never come across a man like University of Dayton football coach Rick Chamberlin. Never.

Chamberlin is as genuine as an authentic Rolex timepiece and just as reliable. He is, by far, the classiest man I ever encountered.

His personality is a smile a minute. He loves football, he loves UD and most of all, it is evident to all who cross his path, he loves people.

I have never encountered a coach more accommodating. Win or lose, he is the same. He is never gruff, he is never demeaning, he is never pessimistic.

When Leo Durocher said, “Nice guys finish last,” he had never met Rick Chamberlin. He has never finished last in anything.

As UD Director of Athletics Neil Sullivan put it, “In my entire time here, which is going up on 17 years, I’ve never seen Rick have a cross word with anybody on this campus. He embodies everything that is right about our Catholic Marianist values.”

After 48 years as a player, assistant coach and head coach, the 65-year-old Chamberlin is retiring. In 14 years he won 107 games and lost 47. 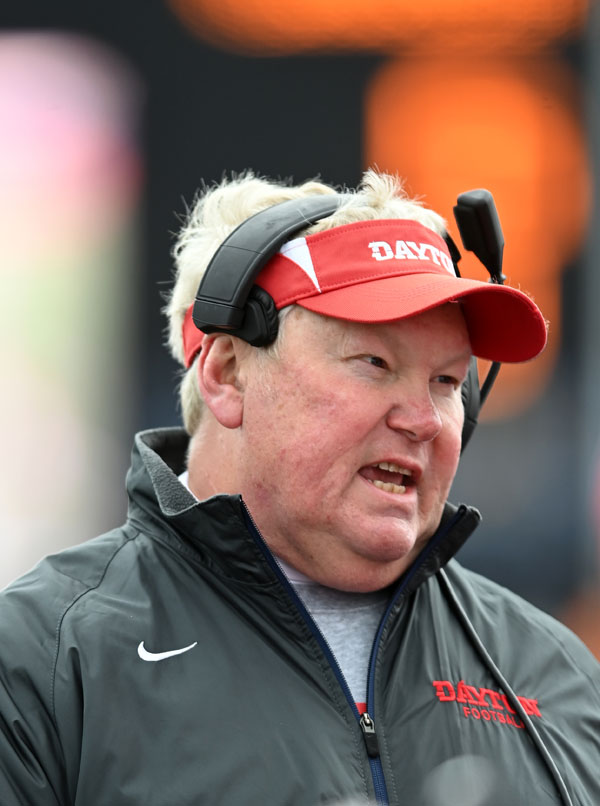 The man famous for wearing a golf visor and Bermuda shorts on the coldest of game days, the man who always ran onto the field in front of his team before games, leaves a lasting legacy.

“How he competed, how he treated people shows how he could be a fierce competitor, yet be a kind, gentle man in every other aspect of his life,” said Sullivan.

For his part of a media conference Wednesday afternoon at UD Arena, Chamberlin thanked everybody from top to bottom and said, “That includes the campus people, not just the athletic department, great people to work with. From John who works in the K.U. (Kennedy Union) cafeteria to Melvin, who is in maintenance.”

Chamberlin has busily taken phone calls from all over the country from well-wishers, including his first football coach in peewee football in Springfield, “When I was 10 years old playing for the Art Fab Bengals for Gary Blazor and I told him,
‘You were the one who started it all for me in football.’”

Chamberlin began his collegiate career at UD in 1975 after graduating from Springfield North High School. As a player he was as successful on the playing field as he was directing victories while wearing headphones on the sidelines.

His 419 career tackles have stood the test of time, a school record, as has his record one-season total of 152.

Upon graduation he became linebacker coach for Mike Kelly, then defensive co-ordinator. When Kelly retired, Chamberlin took over in 2008.

Of all the games he coached, one sticks out like a thumb just trampled by a 325-pound defensive tackle.

“There is,” he said. “A game I’ll never forget, some great victories, some sad losses. But in 2010 against Drake, our last home game. We were behind after they scored a late touchdown. There were just seconds left in the game.

“Steve Valentino (quarterback) put together a drive that just got us past the 50-yard-line. He (Valentino) throws a Hail Mary. . .that’s all we had, it was fourth down, seconds to go. He threw it to Luke Bellman and he caught it over a Drake defenseman in the end zone and we win the game, and the Pioneer Football League champioship.”

Chamberlin’s wife, Jane, was at the media conference and Chamberlin said, “We got married in the summer of 1980. That following fall we won our first national championship. So I figured that was a sign that I better hold on to this lady.”

And it was always for better, never the worse.

“After a game, if it was a good game, we went out to eat and had a good evening,” said Chamberlin. “If we lost, a bad game, I came home and went to the basement, that’s what I did.”

While talking about the pride of being a Flyer, Chamberlin related a story about his first trip wth the team as a freshman, a trip to Philadelphia to play Temple.

“We’re walking through the airport with our coats and ties on and this lady comes running up to me and she says, ‘Are you a Flyer?’ And I said, ‘Yes, I am.’ She said, ‘Can I have your autograph?’ And I thought, ‘Wow, she wants my autograph, just because I’m a Flyer.’”

Chamberlin dutifully complied and an upper classmen approached him after the lady left with her ‘Rick Chamberlin’ signature and said, “You do realize she thinks you’re a hockey player for the Philadelphia Flyers?”

Chamberlin gathered his players together early this week to tell them of his retirement decision. As he talked about it, it was the only time he came close to tears when he said with a quivering voice,  “The hardest part, the hardest, was knowing I won’t be around them any more. It was hard to make this decision knowing you are not going to be around these young men.” 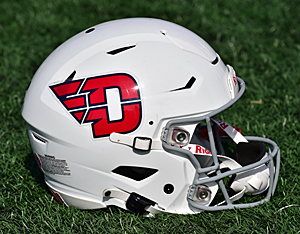 Then he slipped in a slice of humor.

“I was glad nobody stood up a cheered,” he said. The cheers aimed Chamberlin’s way were all heartfelt in appreciation for a job not only done more than well, but done the right way.

Asked what he planned to do, he smiled and said, “My immediate plans are to go to Disney World. I am. I really am, because just like a player who was in the Super Bowl, I’ve been in a Super Bowl for the last 48 years.”