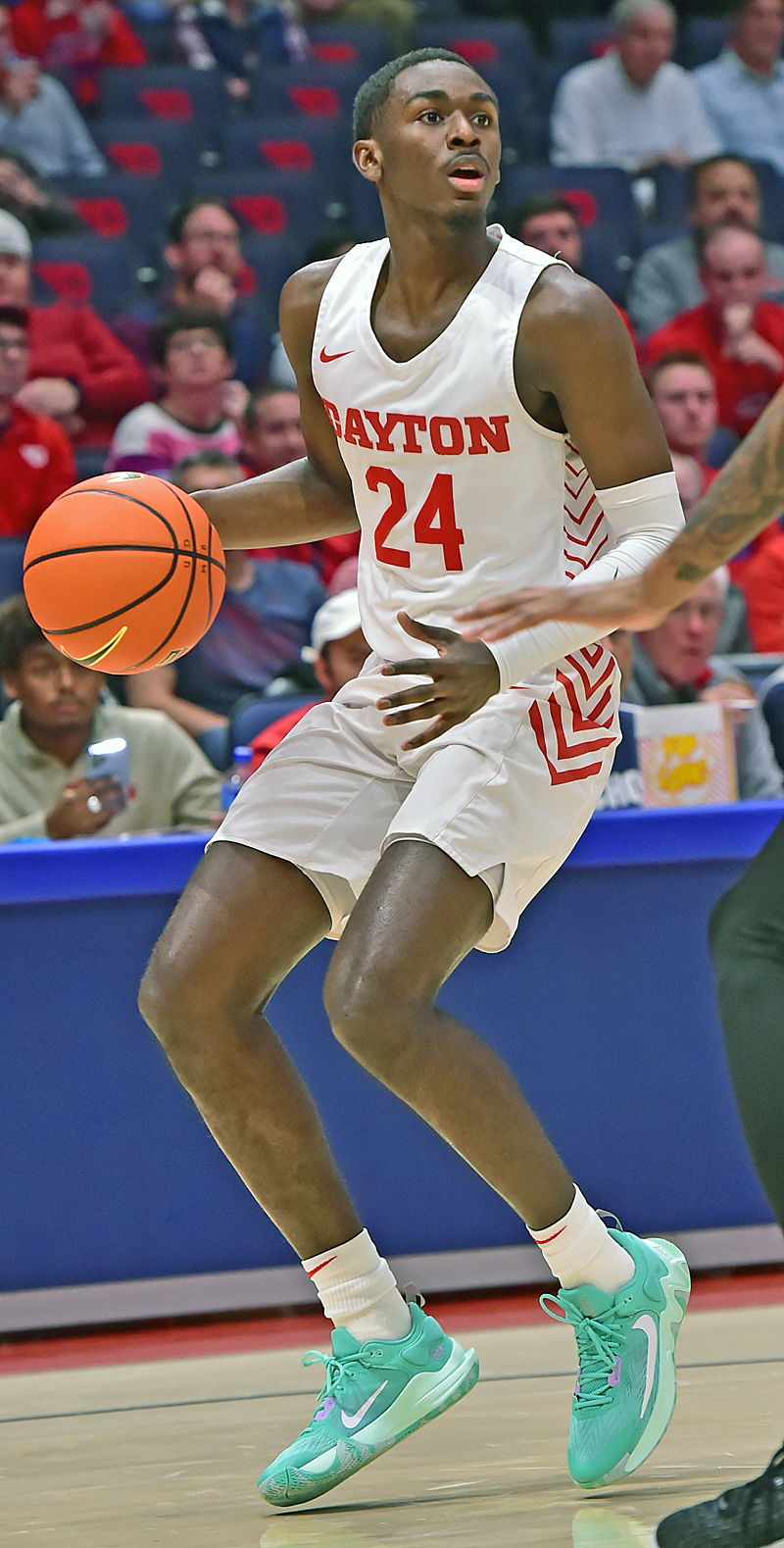 Kobe Elvis was the only Flyer in double figures with 16.  (Press Pros File Photos)

The University of Dayton Flyers and Wisconsin Badgers put on a clinic on how not to shoot straight in the first round of the Bad Boy Mower Battle 4 Atlantis tournament Wednesday in The Bahamas and they produced an old-school score with Dayton losing, 43-42 when it couldn’t get off a last-ditch shot.

NASSAU, The Bahamas — It is not true that they are using carnival-sized rims that are barely bigger than a basketball for the Battle 4 Atlantis tournament.

The University of Dayton and Wisconsin just made it look that way Wednesday afternoon in Imperial Arena.

^When you hold the opponent to 23.7% shooting, wouldn’t you win? 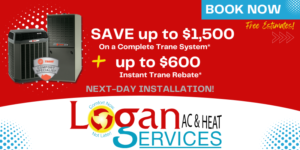 ^When you force the opponent to finish the game 1 for 17 on field goal attempts, wouldn’t you win?

^When you hold the opponent to nine points in the last 10 minutes of the game, wouldn’t you win?

The Dayton Flyers did all that. . .but didn’t win.

And they had a whopping good chance to win it after Toumani Camara tipped in a shot with two minutes left, drawing the Flyers to within two, 43-41. 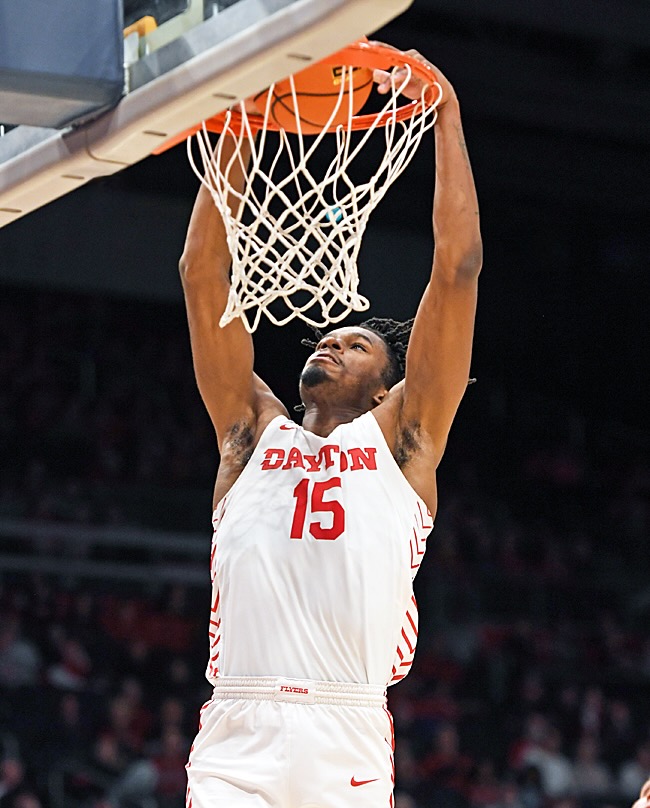 Then. . .DaRon Holmes II blocked a shot, ran down the court and was fouled. With a chance to tie it with :59.7 seconds left, he missed the first free throw and made the second and the Flyers were within one, 43-42.

Then. . .After a couple of timeouts, Camara blocked a shot at the rim and the Flyers had the ball with 32 seconds left.

Then. . .after three timeouts, two by UD, one by Wisconsin, the Flyers began a play with :08.5 seconds left. They drained the clock to two seconds and Kobe Elvis drove to the right side.

Then. . .His shot was blocked out of bounds.

Then. . .The inbounds play was not executed with two seconds left and that led to a game-ending shot clock violation.

“After the timeout, we wanted to go with Elvis because we thought the match-up was best there,” said UD coach Anthony Grant on his post-game radio show. “He tried to drive the ball, but they cut it off.

“We got a ball reversal and got it back to Elvis and he didn’t have a good look at it,” said Grant. “On the inbounds past underneath, we didn’t execute it very well. We didn’t execute the action that we were looking to run. That led to a bad look.”

And the bad look led to no shot, a shot clock violation and defeat.

While Wisconsin couldn’t hit the Caribbean Sea from the deck of a cruise ship, the Flyers were just as bad and couldn’t find the rim with GPS, a guide dog and a Sherpa.

Wisconsin is known for its sledge hammer defense. Getting off shots against the Badgers is like trying to steal a pot of honey from a bear. 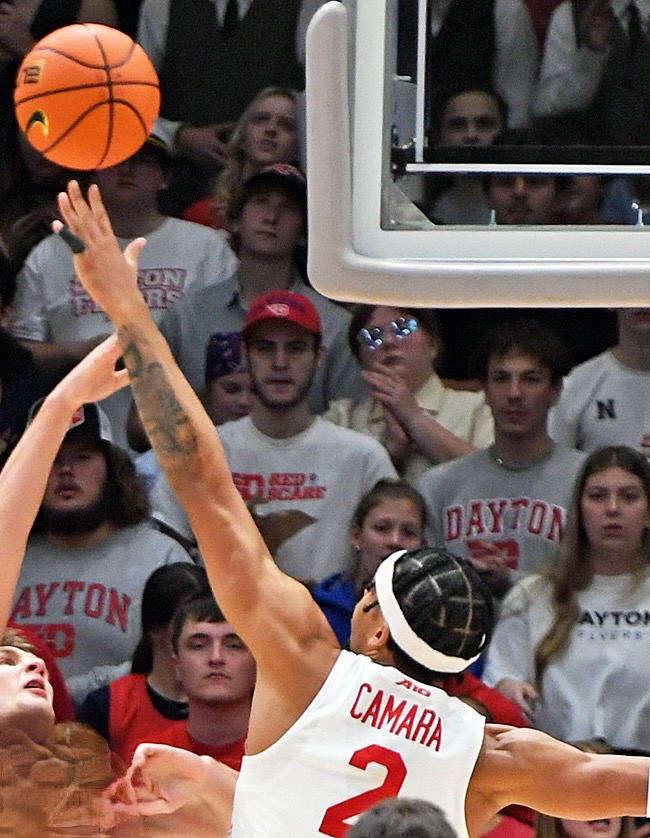 Toumani Camara made a key blocked shot late in the game.

In the first half, they forced UD to cast and cast and cast from outside. If the paint in the lane was wet, the Flyers wouldn’t have gotten any paint on their sneakers.

“Fourteen points in the first half, all the difficulty we had finding the bottom of the basket. . .but the guys stayed resilient, they trusted each other and put us in position to win. On things that I think this team will be good at, it wasn’t working,” said Grant.

Freshman Connor Essegian, who scored 11 of Wisconsin’s first 13 points, made both technical foul shots and Steven Crowl scored because Wisconsin maintained possession after the technical.

That pushed Wisconsin to its biggest lead of the game, 34-24. And the technical ignited the Flyers.

Wisconsin’s leading scorer, Tyler Wahl (15 points a game, scored his only basket and was fouled. His three points gave the Badgers a 42-39 lead with 4:38 left and was the Badgers last basket. 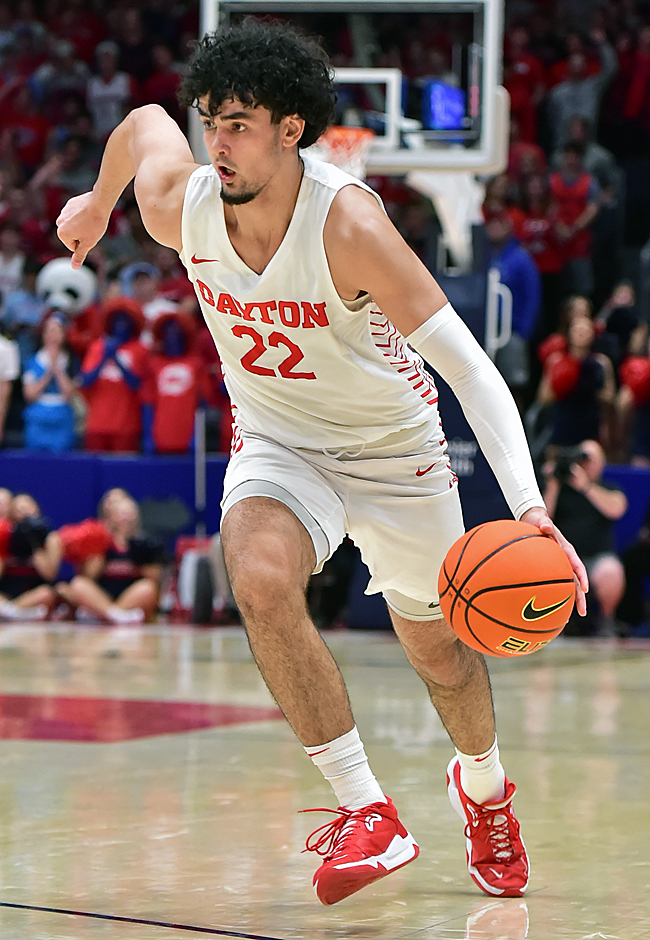 Mustapha Amzil hit a pair of threes to keep the Flyers close.

Then came the frantic 4 1/2 minutes in which the scoring was Dayton 3, Wisconsin 1.

Elvis was the only Flyer in double figures with 16 on 7 of 17 shooting, but 1 for 7 from three. Holmes, surrounded by red shirts every time he touched the ball, got off only six shots and made three en route to nine points.

Despite his team shooting the ball like inebriated pirates, Grant said the Flyers were physically and mentally tough during the ordeal, scrapping to the end with a chance to win.

“Without question,” he said. “We didn’t have offensive success, right? There are a lot of things that your effort and your energy will allow you to do. Some things you can’t control is whether your shot goes in.

“Your defense can always show up every night and our defense showed up (today),” he added.