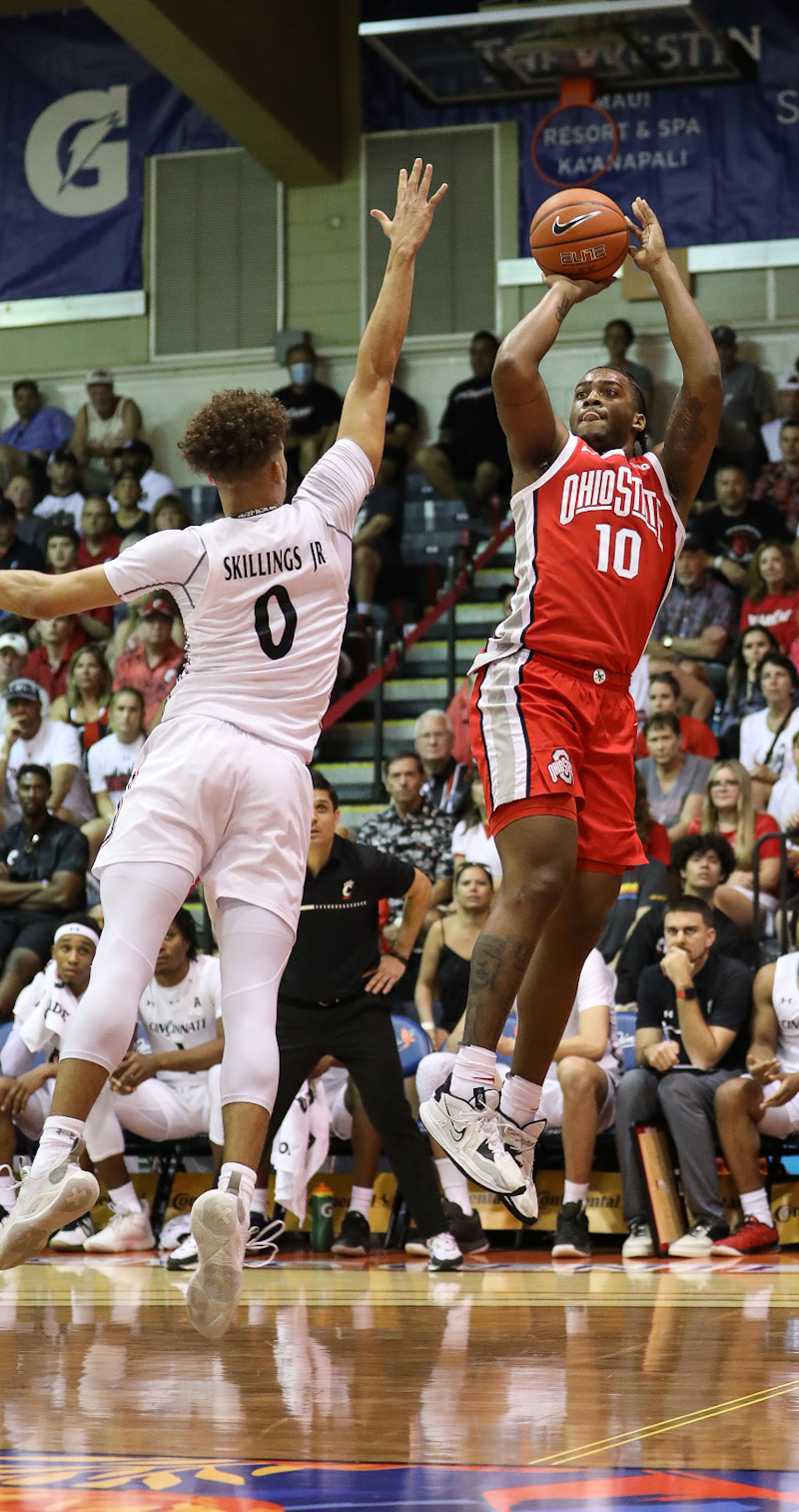 Brice Sensabaugh goes over a UC defender for two of his 17 points. (Photos courtesy of OSU).

Ohio State’s veterans woke up and its top two freshmen continued to play well, allowing the Buckeyes to defeat Cincinnati for the fifth straight time since the teams’ meetings in the 1961 and 1962 national championship games.

Lahaina, HI – It’s not unusual for a college coach to demand more from a freshman point guard at the outset of his career.

But what OSU coach Chris Holtmann wants from Bruce Thornton…that might be a first.

After Thornton expertly directed the Buckeyes to an 81-53 victory over Cincinnati in Round Two of the Maui Classic on Tuesday, Holtmann voiced a preference for more of something most first-year point guards are excessively long in providing.

“Bruce has been really, really solid this tournament in a lot of ways,” Holtmann said. “He’s really sure with the ball. I actually want him to take a few more chances than what he does right now. I think we’ll get him there.“

One day after scoring 13 points and committing only one turnover in a loss to No. 17 San Diego State, Thornton contributed 17 points without a turnover in the Buckeyes’ ascent to 4-1 overall and 1-1 in this Maui Classic.

In three previous trips to Maui, OSU has never finished worse than 2-1. To get there this time, the Buckeyes must defeat No. 21 Texas Tech in the fifth-place game at 2:30 p.m. Wednesday. 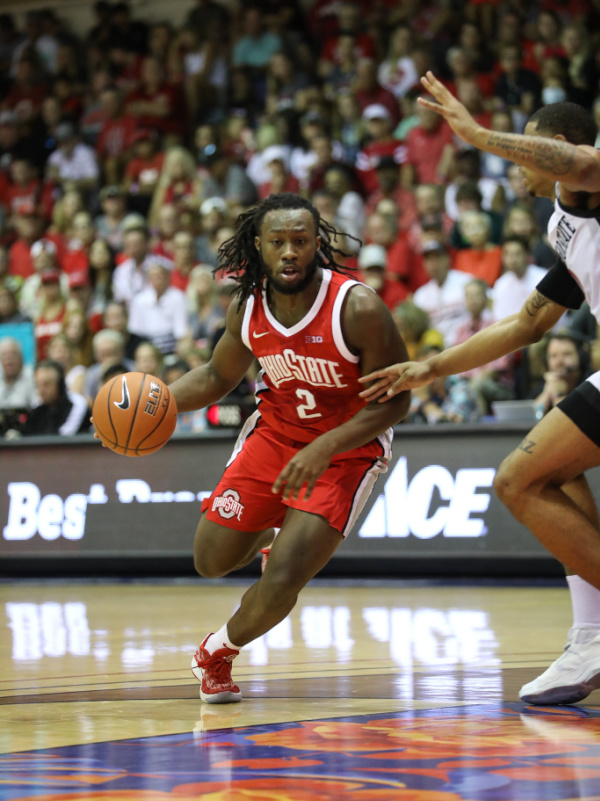 Bruce Thornton has committed only one turnover in two games at the Maui Classic.

“We’re going to see a defense unlike anything we have ever seen,” Holtmann said. “In my six years, we have not played a defense like this, in terms of their ability to keep you on one side of the floor, prevent ball rotations, collapse on the ball and turn you over at a high level.

“It is elite in every way. We’re going to have to deal with some frustrations and some difficult plays and some tough moments in the game to give ourselves a chance.”

The Buckeyes had only six turnovers against UC, and only eight against San Diego State, whose defense Holtmann spoke both glowingly and ominously of before playing the Aztecs.

Thornton’s physical strength has allowed him to transition seamlessly from high school, where he was the Georgia player-of-the-year, to Division I.

“He has a poise about him that good point guards have,” Holtmann said. “He just has a really good poise to him. I think that’s what’s enabled him to be a really good player for so long. He really competes on both ends.

“He is a two-way player. We’ve talked about needing to recruit and build a team of two-way players, and he is that. I think that’s a really important thing for our group, and he’s established that as a freshman.” 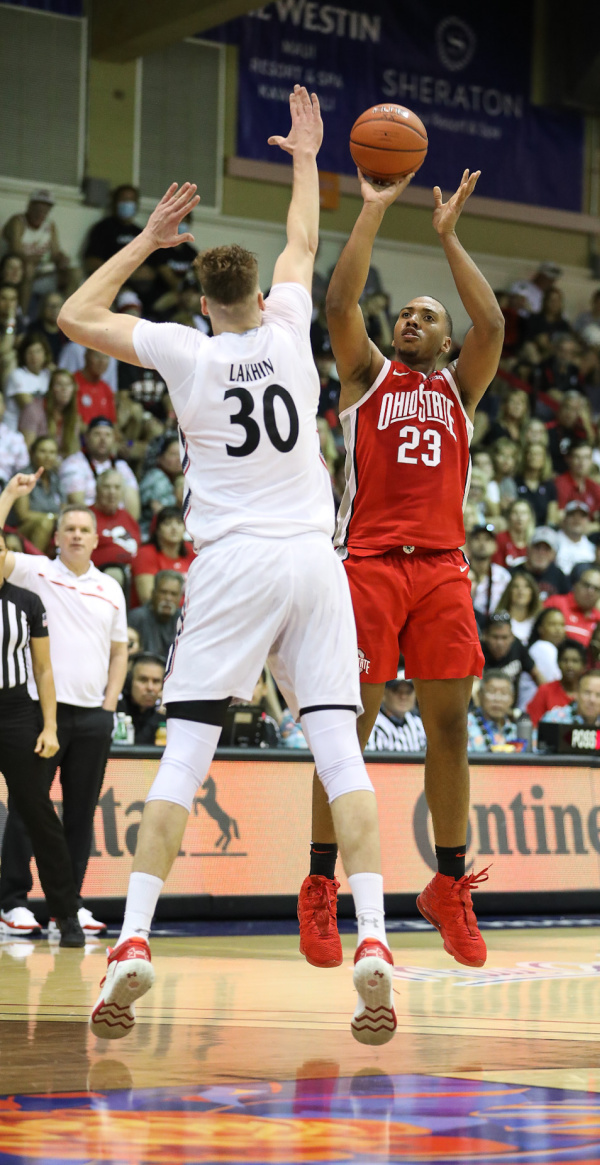 Zed Key bounced back from an eight-point game in a Tuesday loss to San Diego State to score 19 and grab 12 rebounds.

Cincinnati lost touch late in the first half and early in the second, chiefly because it didn’t get nearly the production expected from its backcourt.

Nolley had 33 and DeJulius nine in Cincinnati’s loss to No. 14 Arizona on Tuesday. Nolley had nine of UC’s 17 three-point field goals in that defeat.

The Bearcats hit their first two long-distance attempts against Ohio State to surge in front, 8-2, but then made just two of their final 16 tries.

Zed Key scored eight of his 19 points in the first five minutes to help OSU rally back into the lead.

The Buckeyes had six of their 19 offensive rebounds in the first five minutes, scoring seven second-chance points early to take control.

“I thought our guys were ready to play coming out of the gate,” UC coach Wes Miller said. “But they got after us on the offensive glass. I thought that opened the game up for them.”

Brice Sensabaugh’s three-pointer at the halftime buzzer handed the Buckeyes a 38-27 margin and Thornton and Key led the second-half getaway to a lead as big as 24 points. 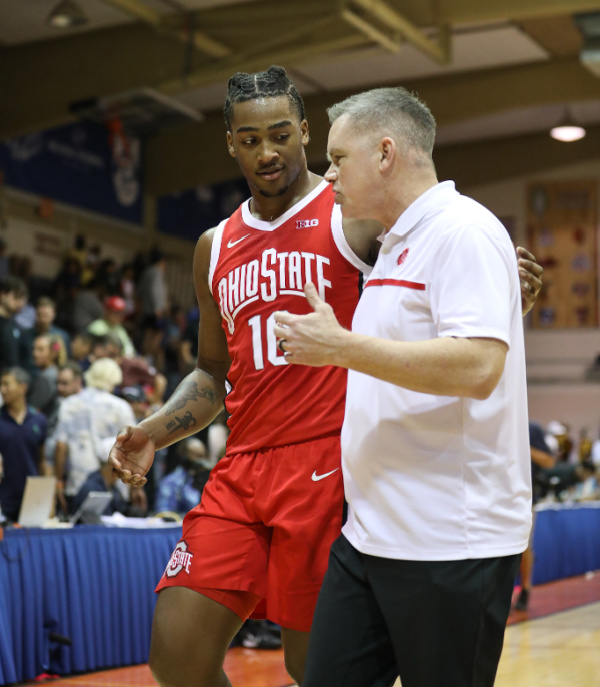 Head coach Chris Holtmann has some instruction for Brice Sensabaugh after his three-pointer to end the half handed OSU an 11-point lead.

Thornton’s triple at 9:21 supplied that 63-39 margin, one of two triples he hit in the second half to go with a conventional three-point play in traffic.

“Right now, he has a lot on his mind as a freshman point guard,” Holtmann said. “It’s a lot for a kid, but he’s as mature as any freshman we’ve had. He’ll go through some struggles, but he’s been really good these two days.”

Sensabaugh had 17 points and Sueing 11, joining Key in offering a bounce-back performance from Tuesday when neither Sueing nor Key scored in double figures. 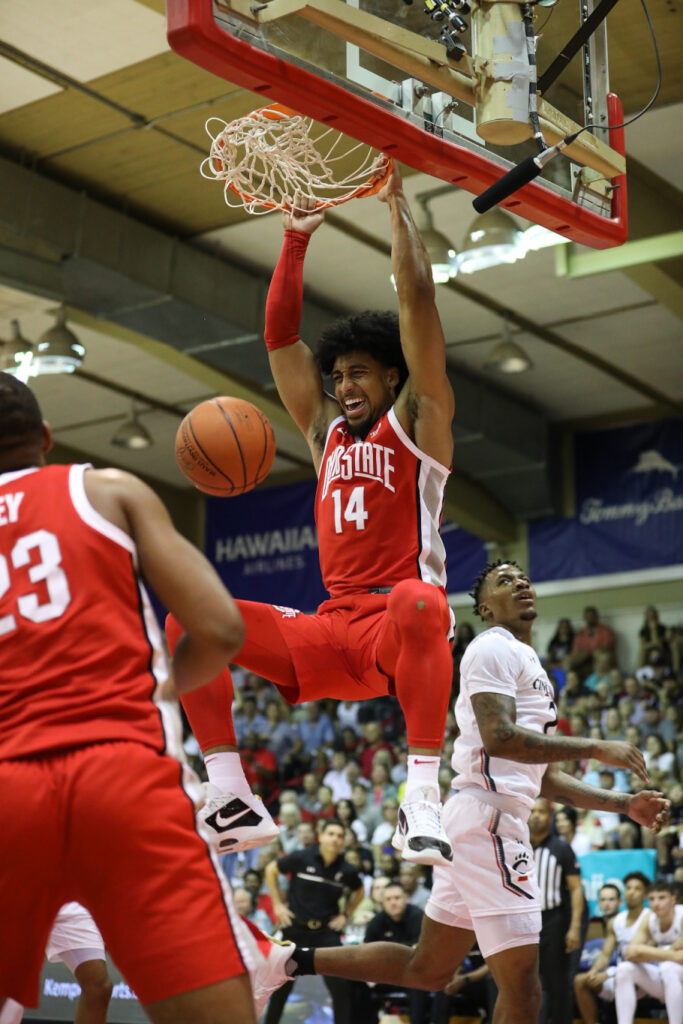 Justice Sueing atoned for a rough opener in Maui to give fans in his native Hawaii something to celebrate.

Huffer Chiropractic in Dublin and Jackson Center will help you maximize your potential.