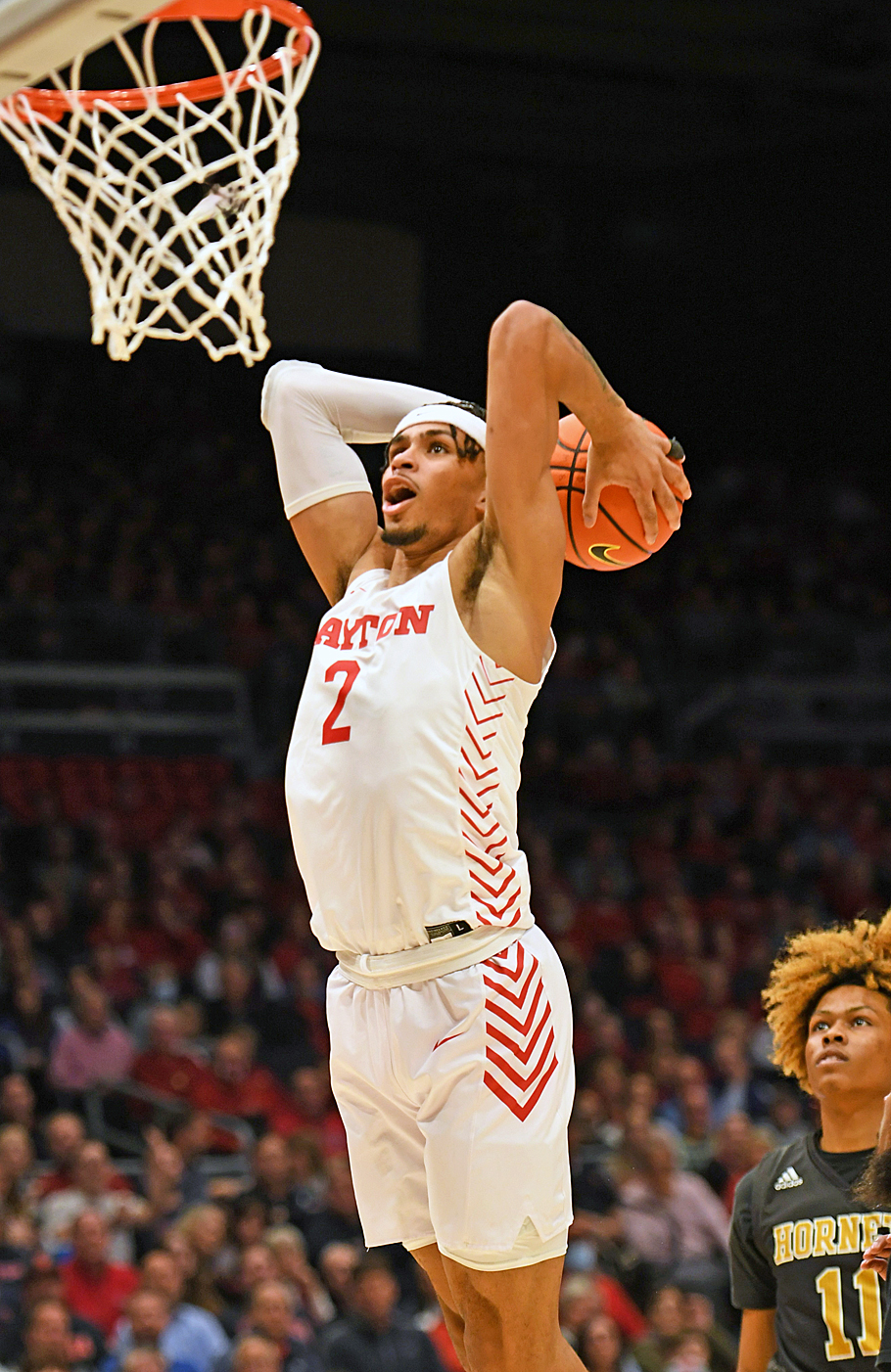 They’re expected to be good, and the old familiar suspects did nothing in Saturday’s scrimmage to damage the optimism.  Hal McCoy writes for Press Pros.

The Flyer Faithful is like a couple of car commercials as the University of Dayton basketball team prepares for the 2022-23 season.

They are like the Lexus motto, “Experience Amazing,” and the Toyota motto, “Let’s Go Places.”

The fans, indeed, expect to experience something amazing this season from their Flyers, who will begin the season with seven of last season’s top eight scorers back on the UD Arena floor.

Going places? The Atlantic 10 regular season champions, the A-10 tournament championship and, yes, a long run in the NCAA tournament.

As Frank Sinatra sang it, “(They) have high hopes, high apple pie in the sky hopes.”

Some of those fans got a cameo glimpse of the Flyers in UD Arena Saturday afternoon. The Red-Blue scrimmage, dormant since 2016, was resurrected.

One of the team’s disappointments last season was the play of 6-foot-7 red shirt sophomore Zimi Nwokeji. He missed most of the pre-season with an injury and the rust from not much practice showed early in the season. As a result, he was mostly lost on the depths of the bench.

On Saturday, he displayed vigor and fire while playing on the Blue team, cannon fodder for the Red team comprised of the main pieces returning from last season.

After the Reds jumped to a 6-0 lead, Zimi hit a three and ended up with seven points — five for the Blues and two for the Reds when he played for the ‘first team’ in the second period.

They played three six-minute periods and the first-string Reds rolled up a 21-8 lead. The Reds eventually won, 43-28, with the usual suspects dominating.

DaRon Holmes II was the Beast at the Basket, owning the backboards and slam-dunking a couple of times on lob passes from point guard Malachi Smith, a reprise from last season.

Toumani Camara was the usual complement to Holmes near the rim with game-high 15 points that included a pair of three-pointers.

The Flyers, of course, are Marked Men after the coaches and media picked them to win the Atlantic 10. And the Flyers are expected to be in the top 25 when the polls come out soon.

What does that mean to returning starter R.J. Blakney, who scored the game’s first basket on a dunk off a pass from Holmes. 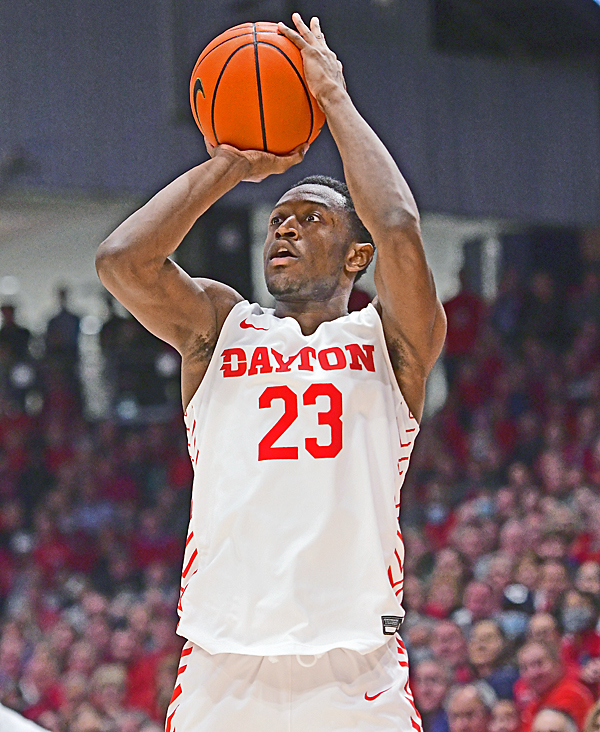 “You are always going to be a target and we just have to go out there and play our best. Just do it.”  –  RJ Blakney

Of playing in front of fans after seven or eight private practices, Blakney said, “It was fun. We really can’t wait to play in front of the fans and we’re excited man, just excited.”

It all begins October 29 with an exhibition game against Capital University, coach by former Flyer guard Damon Goodwin.

The regular season opens Nov. 7 with a game against Lindenwood University, which just became Division 1 and was accepted this year into the Ohio Valley Conference.

Nwokeji is on the same plane as Blakney when it comes to expectations and the target for the opposition.
“It is less than a target on our backs and more of challenge,” he said. “We accept that. Every year A.G. (coach Anthony Grant) tells us we’re the best team in the A10.

“But, just because we had a great season last year, now everybody believes it this year…nothing has really changed for us,” he added. “It’s the same thing going forward, the same chip on our shoulders.”

But being in the Associated Press top 25 would mean something to the Flyers, Nwokeji believes.

“It is cool to have it, but you gotta have…I don’t know, you’re only as good as your next game,” he said.

The Arbogast family of dealerships is pleased to sponsor your favorite Flyer sports on Press Pros.

And being picked to win the A10?

“Sure, it means something,” he said. “It’s a great feeling, but like I said, it is going to be a challenge, something we’re going to take on.”

Coach Grant took the microphone after the scrimmage and thanked the fans, which filled most of the lower bowl in UD Arena. And he reiterated it during a post-scrimmage media scrum.

“First of all, I’d like to thank the fans that came out today,” he said. “For our guys, it was the first time being in front of our fans this year and that was valuable experience for us.

“My thing was a carryover with our habits from what we’ve done the last few weeks (in practice),” he said. “This was a different environment with the noise and distractions. Could we stay focused? We did at times, we didn’t at times. That’s too be expected.

“I wanted it to be a fun time, for them to enjoy it,” he added. “But at the same time we wanted to get something out of it. Overall, it was a productive day.”

The UD women also participated under new coach Tamika Williams, but couldn’t scrimmage because, due to injuries, didn’t have enough players. Instead, they went through drills.

One of the newcomers is 6-1 junior guard Taisiya Kovlova from Moscow, Russia, a transfer from the University of Maryland, where she played sparingly.

She created a stir during the NCAA tournament last season when she held a sign that said, “Stop War.” And on her shoes she had inscribed, “No war..”

She admitted she knew nothing about UD or the city of Dayton when she transferred.

“Originally, I didn’t know much,” she said. “It didn’t take me long to learn and just kind of experience the culture and community. I’m really happy I didn’t know about it before, but it is a very happy place for me. I’m really glad I found it and it found me.” 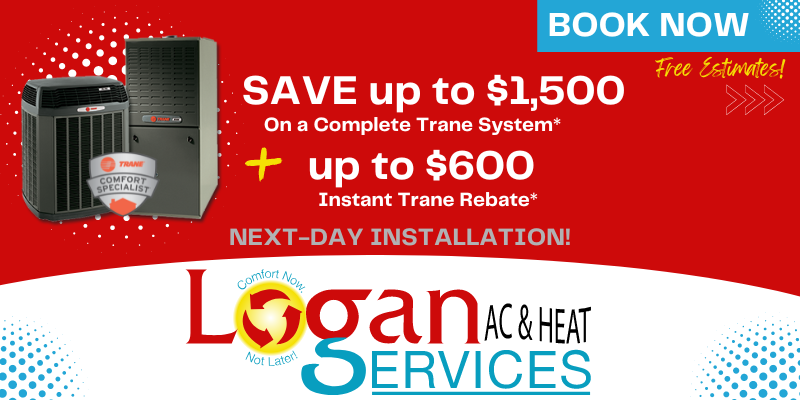