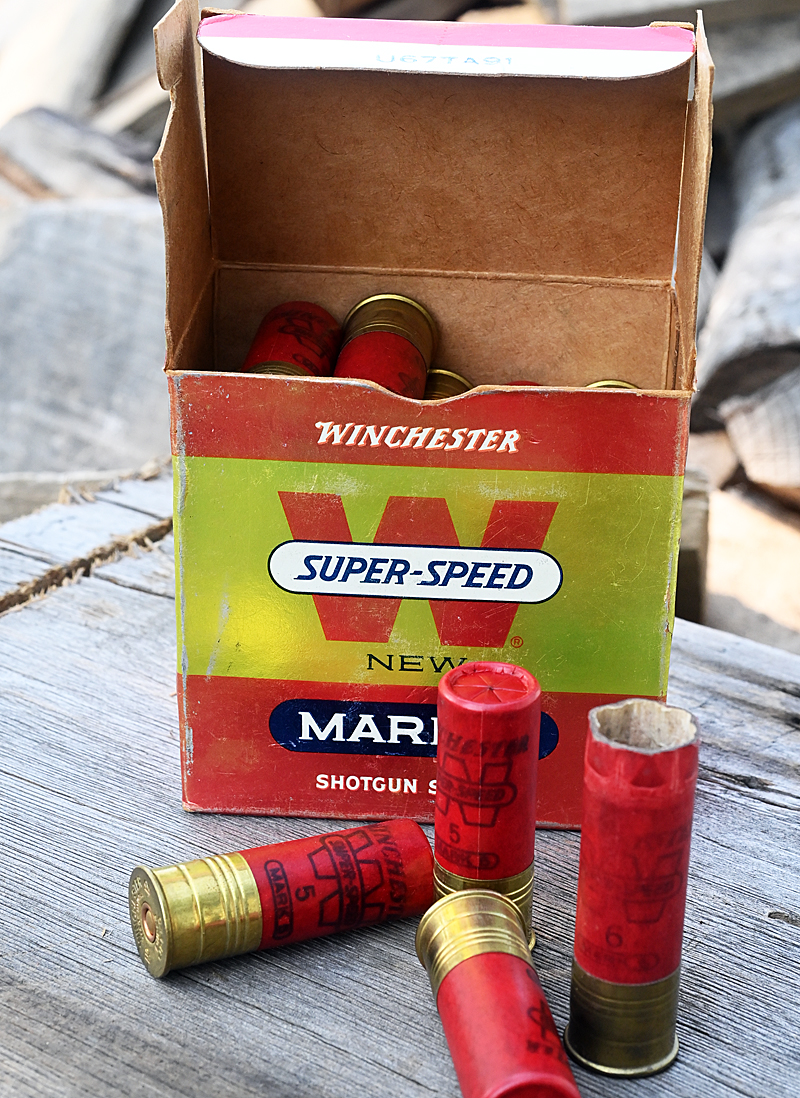 You could set your clock by it…my dad going to the local general store on the day before squirrel season opened to get his yearly supply of ammunition.  None of that, including Dad, is available anymore.

“I’m going to Getaway,”  he said on that Friday afternoon, after school.

“Squirrel season opens tomorrow.  Thought you might want to go with me to get some shells.”

That’s all the incentive my dad had to throw out to get me to get me in the car for a trip to tiny Getaway, Ohio – about five miles away – and a trip to Ervin Humphrey’s general store.  Grape-ette soda was a dime a bottle in 1962.  A big bag of Snyder’s potato chips was a quarter.  But best of all, Ervin had the best inventory of .22 rifle and shotgun ammunition this side of the county seat,  Ironton.  September meant hunting, and the hillsides and creek bottoms of Lawrence County in those days were prime ground for squirrels, rabbits, and quail…and every ten-year-old boy ached for the day when he was old enough to carry a gun and participate. But first, everyone up and down Symmes Creek went to Humphrey’s to stock up on shells.

Dad always got the same thing.  He liked to hunt with his shotgun, so he’d get a box of Winchester Super-Speed high-powered #6’s for rabbits and squirrels…and a box of #5’s for the annual trip to Madison County (London, Oh) for a November pheasant hunt.  The big roosters always took a bit more to bring one down, he’d say, and Dad knew just how to do it.  He was an excellent shot. 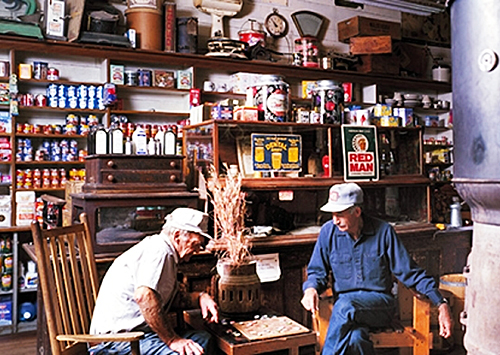 Humphrey’s General Store had everything…and a bottle of pop was a dime.

Of course, no trip to Humphrey’s was complete without local gossip, and the men of the community would sit around on feed sacks and trade stories…while an impatient ten-year-old paced the floor nursing that bottle of Grape-ette, wishin’ that Dad would get what we came for so we could head for home.  The sooner the better – a restless night’s sleep and up at dawn to hit the hickory groves that populated the hills above Symmes Creek.

When he finally got around to buying, Mr. Humphrey asked me what Dad was shooting this year.

He smiled as he reached back on the shelf and took down a box of each, sliding them across the counter to Dad.

Dad didn’t bother to complain.  He just slid a ten dollar bill across the counter.

We were soon out the door, in the car, and on our way home.

“Thought we’d go to the big hickory up in the flat tomorrow morning,”  Dad said.  “For some reason you see both fox squirrels and grays there.  I think it’s because the pond is so close, between the woods and the cornfields.  ‘Foxes’ like corn, too.  As warm as it’s been I’ll bet they get food and water before they den for the day.”

He always had it figured out, despite his preference for hunting later in the fall when the air was cooler.  He was doing this one – opening day – for me.

Dad was an excellent squirrel hunter, and preferred a shotgun over the .22 rifle in the closet because he liked carrying it…and, he taught me, “If you miss you don’t worry about pellets carrying a mile and hurting someone.”  Safety first.

After a sleepless night I rolled out of bed to the smell of Mom frying bacon.  And when we left the house at 6 am it wasn’t yet light.  Dad hunted in a pair of blue denim coveralls and he stuffed six red Super Speed shells in one deep pocket.  The big hickory in the flat was about a quarter mile walk and within fifteen minutes of climbing the hill and getting soaked by morning dew we arrived just in time to take a seat…and wait! 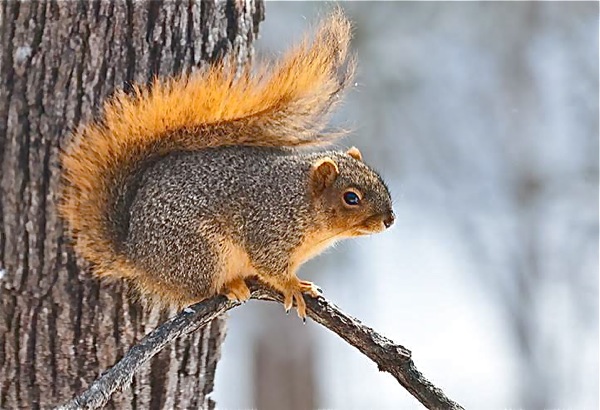 He preferred to sit with the sun at his back because it made identification easier, and when we got settled at the edge of a nearby sassafras grove it didn’t take long for things to come alive.

We immediately heard the clatter of a squirrel scurrying up the side of that big shell-bark hickory.  I wanted to alert him, but Dad already knew.  “Shoosh”, he whispered, his eyes intent on the top of the tree and the tell-tale rustling in the leaves.  I saw it first, I think…a narrow limb dipping as a fox squirrel the size of a house cat hurried out to its tip to capture a breakfast prize.  The range was probably 30 yards, perfect for the full choke barrel of his old Ithaca 12 gauge;  and that gun shot tight.  I knew the routine – at that range hold about six inches in front of the cutting squirrel so as to not ruin any body meat.  He waited…waited…and waited patiently for the squirrel to turn and offer him just the right opportunity. 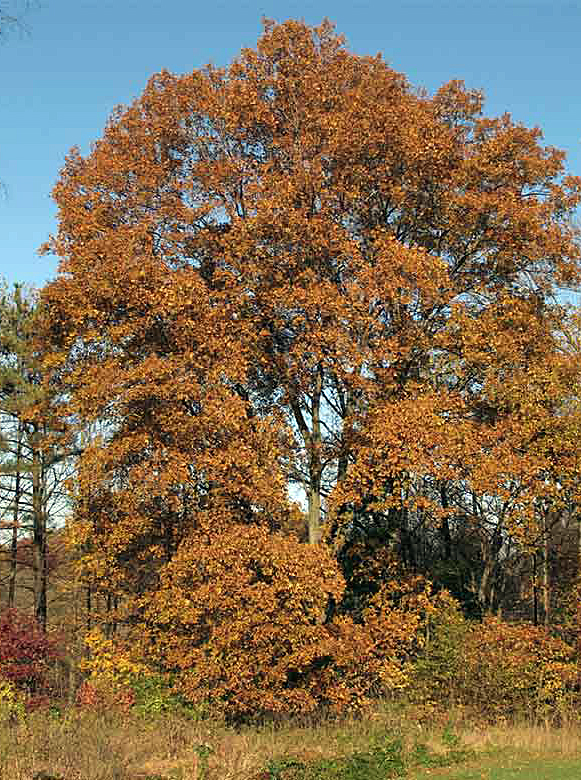 The big hickory stood by itself for years…finally fell in a wind storm.

At the boom of the old Ithaca I saw the big fox flinch, then grab for the limb.  But the Super Speed had done its job and a second later he was crashing through the branches and down to the sedge and ragweed that grew beneath the tree.  The cattle had trampled it down, and where it fell I could clearly see the squirrel – started to go after it.  Dad reached his arm out to me to hold me back.

Within a couple of minutes of silence I saw what he was waiting on.  There was not one, but three squirrels in that tree at the time he shot the first one.  In a moment one of them started to slink down the trunk toward a lower limb.  Dad intercepted him just before he disappeared from sight on the back side of the tree.  Still, he held me back. 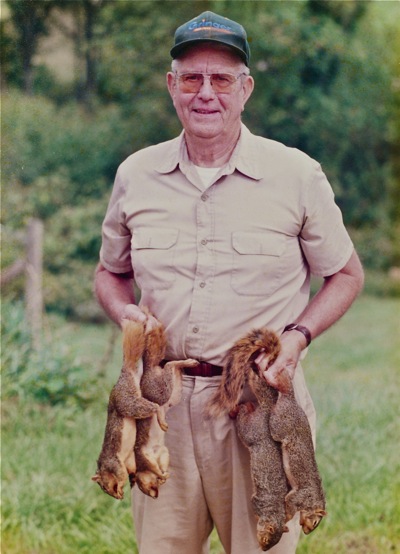 Photo of my dad, Glenn Fulks, on the last day in the squirrels woods together, October, 2000.

There’s nothing more pleasant to a hunter’s senses than the aroma of a spent shotgun shell – intoxicating.  Nothing before, or since, has ever smelled like it.  And while I was wrapped up in sensory reverie, “boom”, the 12 gauge barked again…and “boom”, a second time.

Now squirrels seemed to be raining out of that hickory tree.

“You can go get ’em now,”  he said, breaking his gun open and taking out two more smoking Winchesters.  Within 30 minutes of sitting down to watch, we had our limit of squirrels – two red, and two gray – and on our way back to the house.

“That’s not a bad morning’s work,”  said Dad.  “There’s plenty of shells left for the rest of the season, and probably enough for a Thanksgiving rabbit hunt.  Rabbits don’t need as much killing.  #6’s do just fine,”  he explained.

I thought of him again last week on the first day of squirrel season, and that annual ritual of going to Humphrey’s for a Grape-ette and the buying of the shells.  The store has been closed for years – boarded up when I passed it this summer.

And believe it or not, I still have one of those boxes, dated 1964…I’m pretty sure the last box of shotgun shells he personally bought.