Notably, our July 25 column highlighted by an eyewitness of the Iowa state baseball championships stirred some expected response from readers like this:

“Admidst the arguments over why we can’t play Ohio high school baseball in better weather, I was struck by Doug King’s comment that people in Iowa do it, and “it seems to work just fine”.  So why wouldn’t Ohio even try? Thanks for posting that story.” … Tim Griffith

“Was there any mention by Mr. King of there being an Iowa High School Athletic Association ‘summit’ on diversity, equity, and inclusion? Or was it mostly about playing baseball in decent baseball weather?” … Eric (Westlake, OH)

On the Big Ten’s expansion to include UCLA and USC: 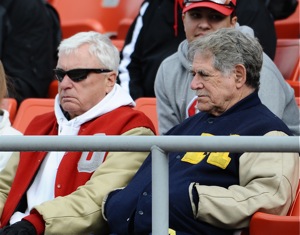 “An Ohio State football ticket will soon cost a $1000 and someone will happily buy it.”  Happily?

“An Ohio State football ticket will soon cost $1000, and someone will happily buy it.” … Gary Criswell (via Facebook)

“This does nothing to improve the Big Ten or make it more interesting.  But it does a helluva lot to illustrate the appreciation for a college education.” … James McCarty

“The addition of USC and UCLA amounts to little more than taking on their debt. No thanks.” … Danny Burcham. (via Facebook)

“The better question is why the PAC 12 needs the rest of the country as a fan base to survive?  UCLA averaged 45,000 in attendance last year for football, and USC averaged 55,000.  If people out there don’t give a s*** why should we?”  … Tim Hughes

Of the responses we received regarding name, image, and likeness in college sports, few made the point more succinctly than this:

“With Ohio State telling us that ticket sales and television revenues aren’t enough to support winning football (it takes NIL $$), am I the only person willing to say that it’s becoming very hard, and very expensive, to remain a fan?” … Wm. Keller

“We are selling out our educational integrity and our great research centers for the sake of college sports.”  … James Ensminger

(Ed. Note:  I’ve often said that if my life is on the line and I’m lying on the operating table…I don’t want to look up and see Terrelle Pryor.)

Among other comments received regarding moving the baseball season to warm weather, long-time reader Harvey Butcher added this note:

“This stood out to me while reading the reader’s comment about the Iowa baseball tournament. In Iowa they’re willing to move baseball back because it benefits the kids who play. In Ohio the OHSAA just moved football season forward so they could get more playoff games in, make more money, and still finish the season by the first week of December. I can’t think of a better example of priority, and hypocrisy.” … Harvey Butcher

(Ed. Note:  Ditto, Harvey.  And let us share some other reader perspectives.  Some have written to ask why we’re critical of school administration and the OHSAA over the baseball season?  Why?  Because they’re the first line of resistance to a change that players and parents support in the majority…at least if you ask.  Not everywhere, mind you, because there are some districts that barely have enough kids to field a varsity team.  But change will start with administration, from the bottom up.  Politicians react to pressure.  And pursuant to the above comment from Westlake, Oh, it’s hard to understand why something so obvious gets pushed aside for summits on other more complex agendas, like diversity, equity, and inclusion/transgender (that will be mandated by the state legislature and passed on to the OHSAA).  Irony? At this point it’s a very small minority.  By contrast, thousands of kids play baseball and softball in wet, freezing weather and we shrug, and say, “It’s always been that way.”  And then we demand progressiveness!   If you ask someone from Iowa most can’t remember now when they moved the baseball season to summer.  Some will say there was a period of adjustment, but it made sense and they just did it.  Your email was excellent, and you said one other thing that bears repeating: “I won’t live long enough to see the Cincinnati Reds play in another World Series, and I won’t live to see Ohio play high school baseball in the summer.”)