Of Boys And Men, Time And Loss…And Homecoming

On the occasion of officially becoming a senior citizen, I took the time to go home, look back, and discover that time and change stands still for no one….and I mean, NO ONE!

Scottown, OH – There’s a hillside along Guyan Creek, on Ohio route 217, outside of Scottown, in Lawrence County, where I spent countless hours as a boy – picking wild blackberries by the three-gallon bucketsful in the summer, squirrel hunting in the fall, and rabbit hunting when the autumn leaves dropped and the broom sedge turned tan with the November chill…the briar thickets becoming a dependable hiding place for sitting cottontails on a sun-splashed December day.

It was property owned by my paternal grandparents, N.D. and Sylvia Fulks, who raised nine boys and one girl on 180 acres of southern Ohio hill and bottom land during the great depression of the 30s.

They milked a small herd of Holsteins, raised a couple of acres of tobacco, melons to sell…anything to supplement the income necessary to feed so many mouths.  Located adjacent to the nearby Ohio River, Huntington, West Virginia was to the south, while Gallipolis was upriver 18 miles to the east, and Ironton 18 miles downriver to the west.

In the summer I spent a lot of time on that farm, trying to help with chores, but generally, I think I just got in the way.  When I was old enough Grandpa and Uncle Frank would let me mow bottom land and the pasture fields with a Farmall C tractor and a sicklebar mower.

For fun I would swim in Guyan Creek, a small tributary that eventually found its way to a bigger one, named Symmes Creek, and then to the Ohio River.  Guyan was about 30 feet wide and two feet deep after a hard rain, but it looked like the mighty Mississippi to a ten-year-old who wanted to cool off, or seine for minnows. 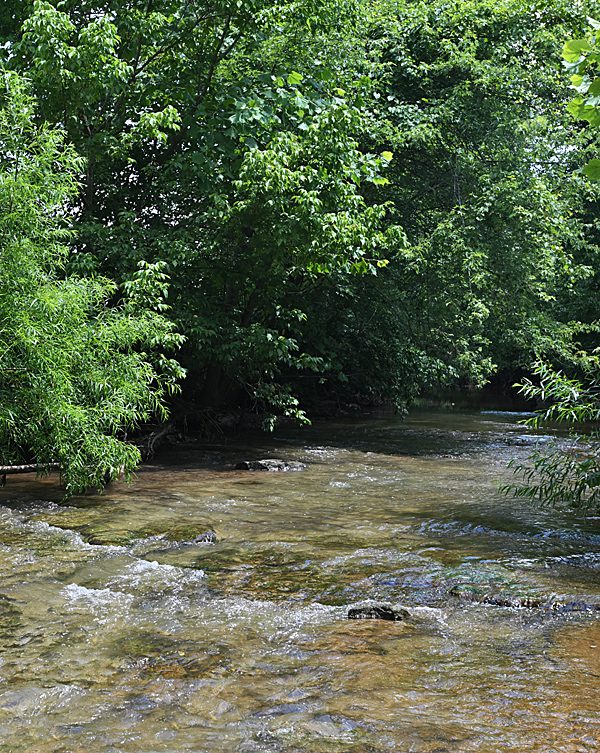 I thought it would never change…mighty Guyan Creek as it looked 50 years ago, and still looks today.

Back then I thought it would never change – the hills, the woods, the fishing pond behind the milking barn where we caught giant bluegills and the occasional bass.

I thought Glenn Holschuh’s general store, in Scottown, where you could trade a bucket of fresh blackberries for a bottle of RC Cola and bag of potato chips…would always be there.

I thought the neighborhood characters – Homer Graham, Ferry Swindler, and Claude Beckett – would last as long as the giant rocks that ringed the hillsides behind N.D. and Sylvia’s house and barn.

And college and the post-school years spent working made no difference.  In my mind the farms up and down 217 from Scottown to Platform would be there forever, along with the people.  Because they had been there, indeed…forever! 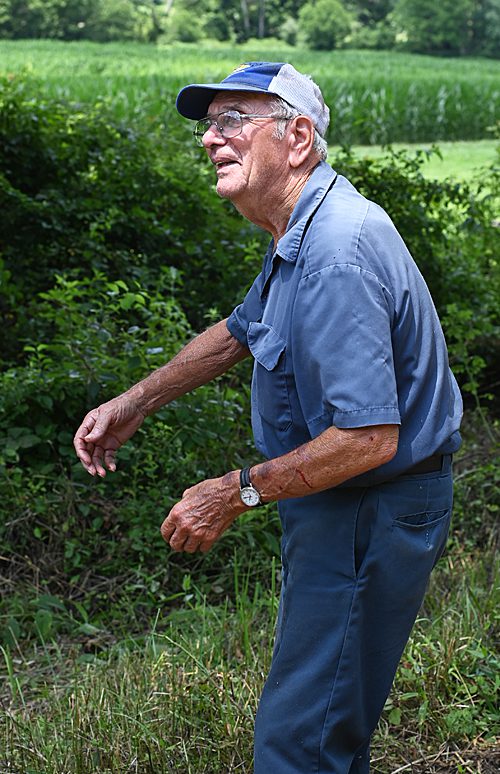 My Uncle Frank explains. “Things have changed. You can’t get there from here anymore.”

Family reunions would shock you back to reality, of course.  As time passed, so did the people of Windsor Township – empty chairs at annual get-togethers, and houses and land changing hands.  People from nearby Huntington began moving in to claim their place in the country.  Suddenly there were new houses ten times the size of the ones with which I grew up.  And these people didn’t swim in Guyan. They had backyard swimming pools!

The family, and that glorious collection of uncles and personalities, also began to dwindle.  N.D. Fulks passed in 1976.  Sylvia died at 98 years, in 2003.  All those uncles, and my one aunt (Norma) would eventually wind down to a precious pair – Frank and Dan – both in their 80s now, and still around to anchor the memories for nephews and nieces –  to remind painfully of time passed and the loss of sweet innocence and times of no particular responsibility.

This past week I went back…to Ironton, Chesapeake, Proctorville, and Scottown.  Shared a meal with schoolmates Danny Burcham and Danny Huff.  And on the third weekend of each July our evolved family, now scattered to the four corners of the world, does its best to make it home, to reunite, and remember!

Uncle Frank still lives on the family farm where he grows a little hay and enough sileage (chopped corn) to feed a herd of Simmental beef cattle.  He was surprised to see me, my cousin Paul, and friend Stephen Long, both from Arlington, Texas, when we pulled in Friday…when I asked to go back to the hill across Guyan to shoot photos of the valley – the same place I frequented 50 years ago. 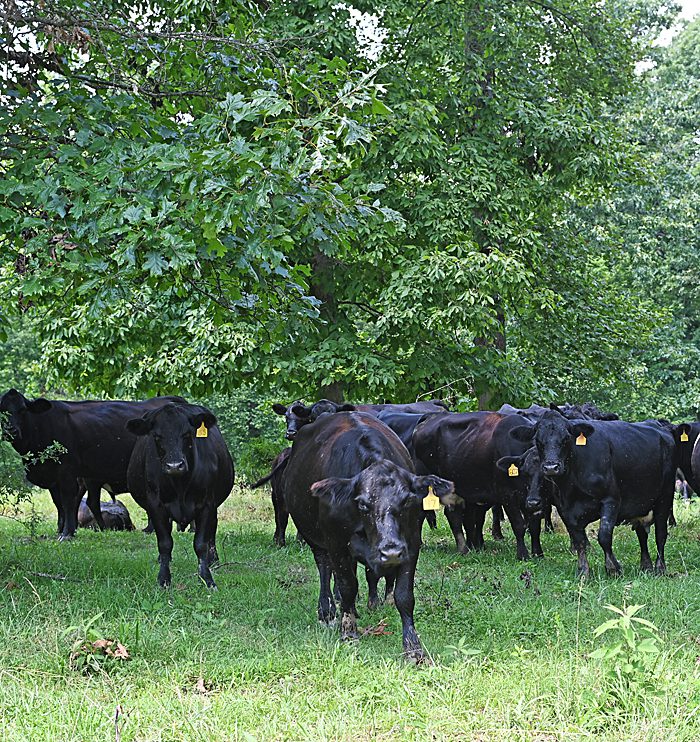 The cows have it good…all the hillside grass they can eat and the shade of generational oaks and hickories.

“You can’t get there anymore,”  he said, struggling with the words.  He had a stroke years ago that impedes his speech, but not his energy and enthusiasm to maintain his daily routine of feeding and tending things around the farm.  He motioned to the hill across the creek, and said, “I’ve cut timber off it four times since you were last there.”

After some badgering he waved us to his all-terrain vehicle and we headed across Guyan and up the face of what we once called Nelly’s Branch…past the foundation of Homer Graham’s old house from the 40s, long gone except for what’s left of some grown-over foundation. 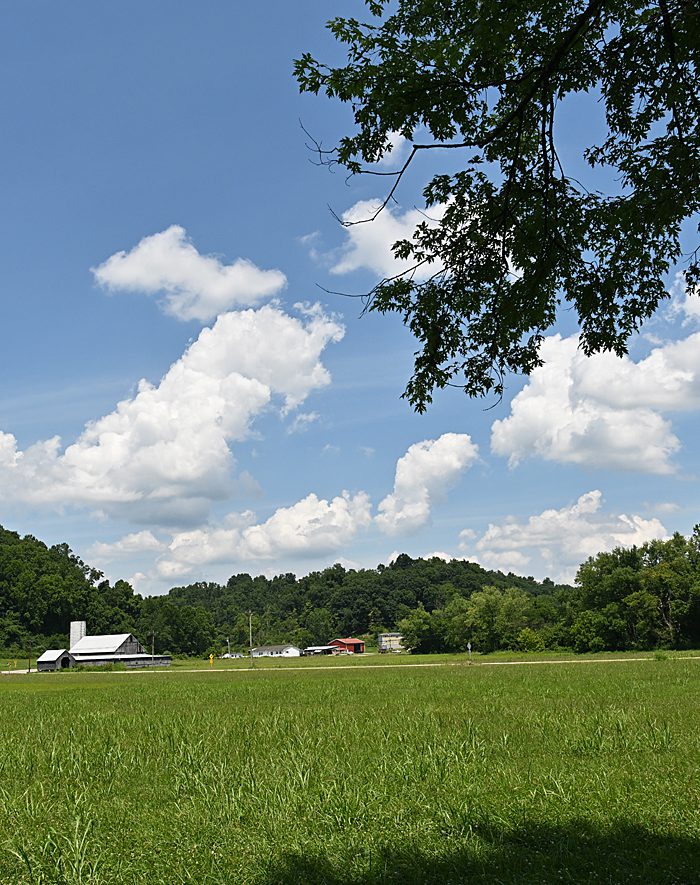 The Guyan Creek valley as it opens up to the view of our family farm…when you make the turn from Scottown.

I was shocked as he attempted to scale the side of the hill – that wonderful, beautiful hill of the 60s – of blackberries, squirrels and rabbits now so thick with trees and underbrush that a rabbit couldn’t run through it.  In fact, we gave up and snaked our way back down through the same tracks we made going up.

“If you want to see the valley from up high,”  he said.  “…let’s go across to the other side of the farm, up where the cattle are.”

There’s a gravel road that scales 300 feet to the top of a different hill above the valley, where he pastures his black cows and calves…and where exists the same paths and rocks of my youth, except they’re on the farm next door.  On a brutally hot and humid day, the cows were lounging in the shade, switching their tails to fight hoards of flies.  The appearance of Frank on the four-wheeler they took as a sign of food and they quickly gathered to investigate.

Farther down the hillside he showed us the rock house hollow, where as boys we played during the hot days of summer.  Now 81, and hampered by the passage of time, Uncle Frank still has the same sparkle in his eyes for life’s good things, and the fruits of his labor.  He was enjoying the visit, and the opportunity to be not only tour guide, but a doting uncle again. 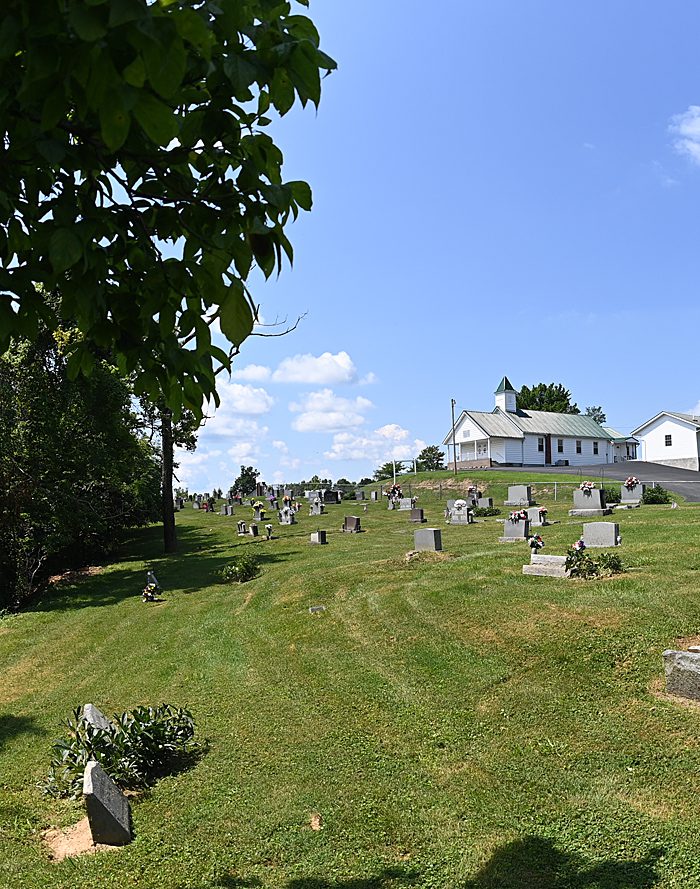 “No,”  he shook his head in disbelief.

And with that sparkle…he laughed.

We shot dozens of images, and when we got down off the hill he took us to the big sweep in the road where you approach the bottom land from Scottown – where the creek snakes by Nelly’s Branch to the east, and past the homes of Tommy Null and Cline Bricker (long departed) to the west.  When you make the big turn around the hill the Fulks family farm opens up to a vista unlike most any you can find in southern Ohio, framed by the ‘mighty’ Guyan on one side, and the hills in the background.

Done with the tour, I felt old, and a little naive.  How could so much have changed in the short span of just fifty years, I asked?  Uncle Frank shook his head, amazed perhaps, that I even made it this far.

But more likely, he had his own moment of appreciation for time, and reality.

The original home of N.D. and Sylvia burned years ago.  The original barn was torn down because of decay, replaced by a different, more efficient structure.  There are no longer cows to milk, just the Simmentals on top of the hill.

“You know,”  he said with satisfaction, “I didn’t get my yard mowed today.”

“And mowing the hillside across the road is out of the question, you think?”  I joked, shaking my head, sad to the reality.

Uncle Frank nodded, and just smiled.  Of boys who grow old, time and loss, and the inevitable pain…of coming home. 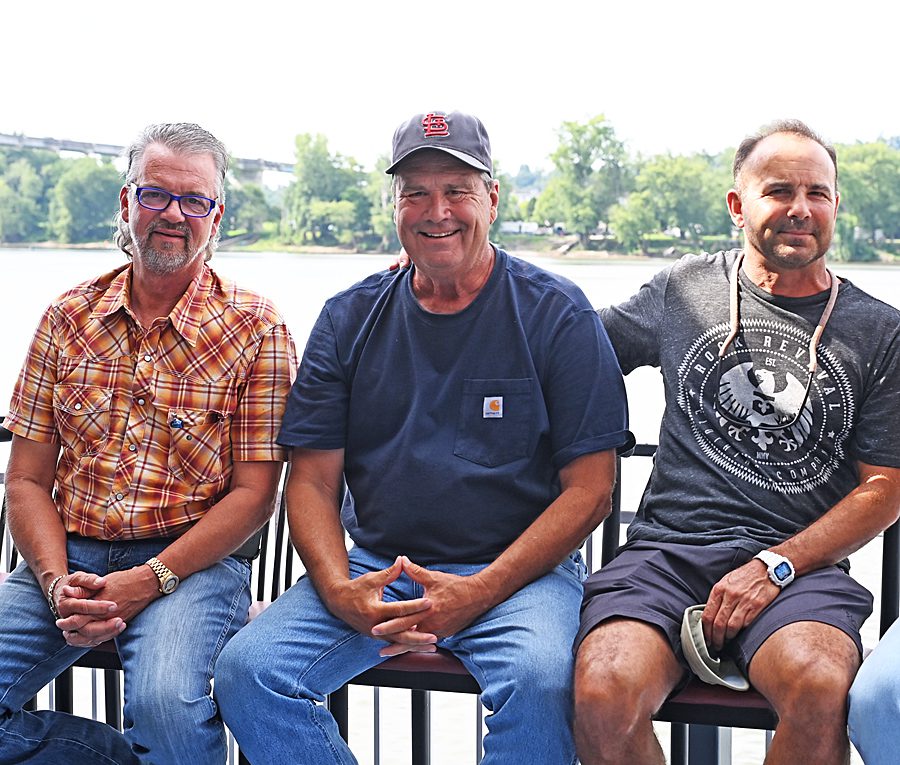