Greg Hoard: How I Met…Stan “The Man”

There are times when fame holds no sanctuary, and when irony and awkwardness become as one and inseparable.  So it was the night I met my first true hall-of-famer face to face…the great Stan Musial!

Ed Note:  One of the best Greg Hoard stories on baseball greats he’s met over the past forty years is this one originally published four years ago.  It’s about how he, as a young journalist, first encountered the great St. Louis Cardinal of them all, hall of famer Stan Musial.  It was popular then, and we know it’ll be popular as an encore read.  Enjoy.

Cincinnati, OH – Back in the ’70s and not long out of college and graduate school, I was working for a small, but successful, newspaper in southern Indiana, The Columbus Republic, an award-winning paper that pushed the limits and, consequently, earned national awards; a paper that groomed and spawned the careers of many successful journalists.

There were three of us in the sports department: the editor, J.D. Lewis, who, through honest reporting, led Indiana University basketball coach Bob Knight to kick him off the team plane; Jim Plump, our assistant editor, who had, on numerous occasions, managed to finagle his Indiana press credential into New York Yankee games, and me, the green horn, a status J.D. and Jim never let me forget.

I had no stripes, so when it came to snowy, winter nights or another distant high school basketball game, that was mine – guaranteed. (Can’t tell you the number of times I slid off the road near Richmond, Connersville, Muncie and Shelbyville.)

Didn’t matter. I was glad to have the job.

One morning, our Managing Editor, Harry McCauley walked into the sports department. 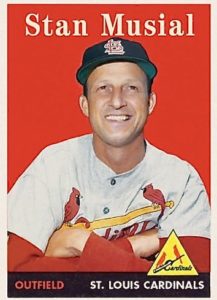 A coveted card of Stan Muisal – 1958 Topps – very rare, and very expensive in this condition.

“Morning, gentlemen,” he said. Plump was at his desk. I was at mine. It was seven in the morning. We were both drinking coffee, smoking cigarettes – hurriedly getting out the first edition.

“I’ve got some news,” McCauley said. “I’m sending you both to a seminar for sports writers in St. Louis, all expenses paid. It’s next weekend. You’ll learn a lot.”

Harry tossed a brochure on Plump’s desk. “Go by the business office this week and get some cash for the trip,” he said. “Don’t go nuts. I’ll expect to see you Monday morning on time.”

“Damn,” Plump said, “listen to all the people who are going to be speaking: Joe Falls from the Detroit Free Press, Dan Devine from Notre Dame, Bud Wilkinson, former coach at Oklahoma. Michael Spinks is going to be there, and Lou Brock. We are going to be brushing up against stars. This is great.”

For some reason, I wasn’t really thrilled about hearing people like Devine speaking from a rostrum, and I didn’t like Spinks. I liked Ali.

But Plump was right, every time the elevator doors opened at the Marriott Hotel, there was another person with a big name: Wilkinson, Devine, Spinks or Falls. Honestly, I wasn’t all that impressed. I loved baseball, only baseball. I would have been more impressed if Bob Gibson, Ken Boyer, Peanuts Lowry, Red Schoendienst or Enos Slaughter showed up. And, as much as I tried, I couldn’t find Brock.

On our last night in St. Louis and after a weekend of burgers, we decided to go to a fancy steakhouse. I don’t remember the name of the place.
“So,” Plump said, “what do you think?”

“ I don’t feel like I’ve learned a lot, except from Joe Falls, Joe Falls is great. But I was hoping for something more.” 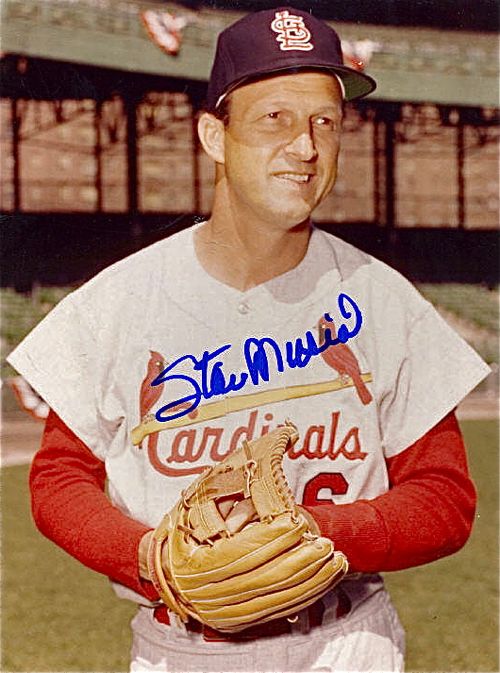 When dinner was almost done, I excused myself and headed to the men’s room, cozying up to the most convenient urinal. To my left there was an older man, not all that tall and slightly balding. He was clearly struggling. He was moaning, obviously having a hard time.

Knowing men’s room and clubhouse etiquette, I didn’t say a word or turn to him. I just went about my business. Still, he battled with nature’s process. He made odd sounds, old man sounds.

Finally, somewhat concerned, I turned and looked at the man. It was Stan Musial!

Stan “The Man” was fighting it. I was 25 and had no idea what he was going through.

In my enthusiasm, I blundered: “Can I shake your hand?”

Eventually, we stood at the sink, washing hands, grabbing paper towels and then shaking hands. It was my first brush and flush with a baseball great, a Hall of Famer, one of the greatest hitters of all time.

When we got back home, I ran into my boss in the hall. “How was the seminar?” he asked.

“Musial? Where did you meet him? How is he?”

“Bathroom,” I said, “at some restaurant. He’s aging, struggling in some areas. But, he’s still “The Man,” always will be.”

Somehow, no matter how much time passes, no matter what you know, heroes never change. I think that’s probably a good thing.

Bats for every occasion, including ‘fungos’. Phoenix is proud to support baseball on Press Pros.