In the district 4 final Coldwater beat Minster to move on to next week’s state ACME tournament.  But the more poignant story was that of boys from a community playing, competing, and helping each other to become better baseball players…and doing it at home!

Minster, OH – The genesis of this story was that of a Facebook message received a few weeks back from a representative of the ACME Baseball Congress…appreciation for our comments about the values of support for community amateur baseball.

‘Community’ baseball, as opposed to strip mining the best talent from three or four communities to play in travel tournaments every weekend, while leaving their hometown friends behind to fend for themselves, baseball-wise, and with less to fend with.

“This is a fantastic article that supports the mission of ACME Baseball,”  that person wrote.

Another reader wrote, “Every word of what you wrote about is true.  Playing together at home helps boys grow up to be better with everything they do.”

Fuel for thought, of course.  But motivation to show up at Minster, Ohio Saturday afternoon for the District 4 final between Coldwater and Minster, with the winner of that game moving on to next week’s state tournament action in St. Henry. 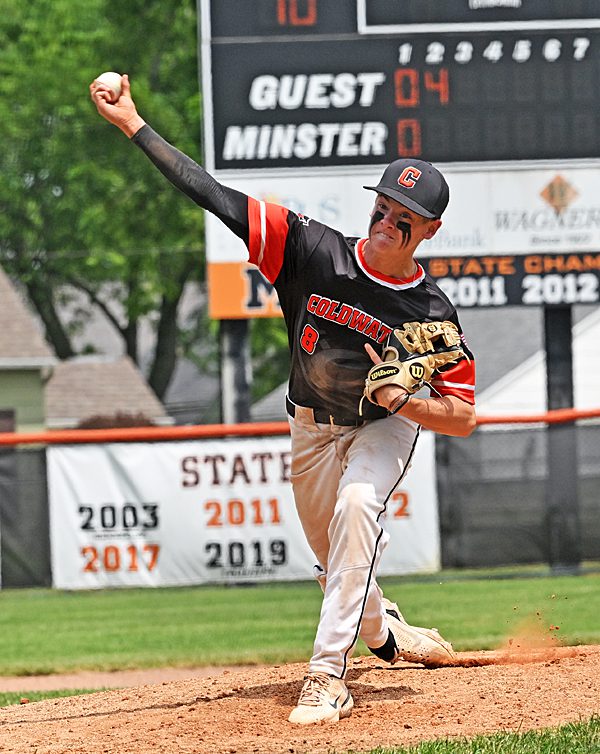 Junior A.J. Harlamert pitched through the fourth, and drove in a pair of runs in Coldwater’s four-run second inning.  (Press Pros Feature Photos)

Actually, had Minster beaten Coldwater they would have had to have played a second game to advance, but Coldwater junior A.J. Harlamert pretty much took care of things in a single game, pitching the Cavaliers to a 6-3 win that was interesting, and at times…compelling.  It wasn’t hard to detect that there was more at stake than just adolescent boys letting off steam and raising a little dust – a few swings for exercise.

“This is where we improve our high school baseball program for next spring,”  said Coldwater coach Tom Brunswick, son of hall-of-fame coach and six-time state champion coach at Coldwater, Lou Brunswick, who was on hand to observe.  “Every spring when you play that last high school game it’s tough, because you’re losing your seniors.  So when we get together for ACME ball in the summer the kids coming back for next year are looking through the fence for those seniors…and we have to tell them, ‘They aren’t coming back.’  It’s a chance to keep your kids together, to move on, get better, and be responsible for Coldwater baseball next spring.  It’s their team now, and this is how it works in Coldwater, Minster, and Celina…because it keeps our kids together.” 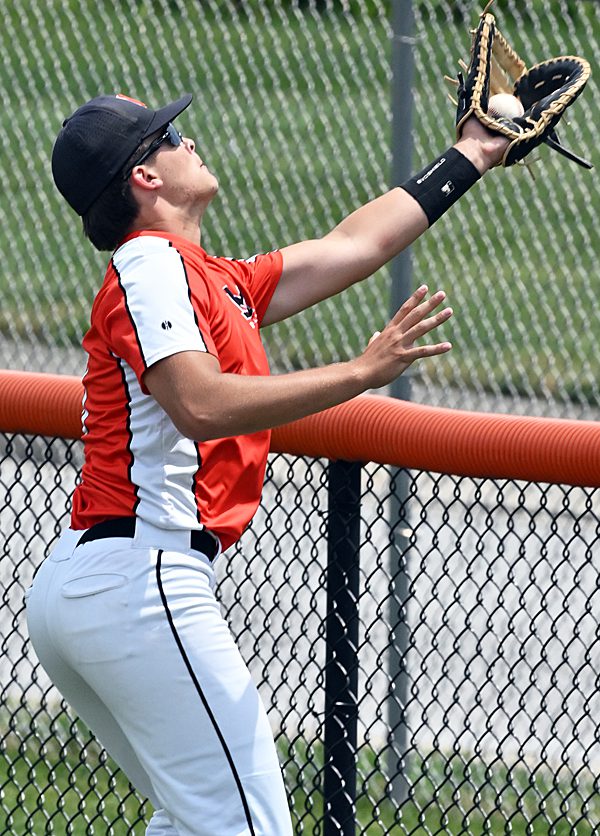 Minster’s Brady Wolf made a fine play on this foul ball in the fourth inning.

Harlamert did more than just pitch, reaching base three times on a hit and a pair of walks, and drove in a pair of runs in the Cavaliers’ four-run second inning.  That turned out to be all the support he and reliever Justin Kaup would need, despite Coldwater adding insurance runs in the third and fourth innings.

Minster didn’t pitch as well, and frankly weren’t the match for the more talented Coldwater group.  But the home team conceded nothing, fighting back to score twice in the fourth and once in the fifth…and missed a golden opportunity to further cut the deficit when Coldwater executed a ‘professional’-looking 6-4-3 double play to kill a potentially bigger rally in the fifth.

“We had another game, a junior ACME game today,”  said Minster’s Mike Wiss.  “And we sent a couple of kids to that game to help out.”

As did Coldwater, that had a junior ACME game of their own at another site.

And again that overtone of kids from home playing together, learning together, regardless of outcome…because they’re building here, something that lasts longer than a Saturday box score in July.

“This is something very special,”  said A.J. Harlamert after a lengthy post-game team meeting with coaches and teammates.  “The last time we got to state tournament (ACME) was my dad’s senior year. So it’s something special to be a part of.  When you’re a kid you walk around the park in the summer and you look up to all the older guys who play ACME and you want to be one of those guys.  It’s crazy to be here now, doing the same thing. 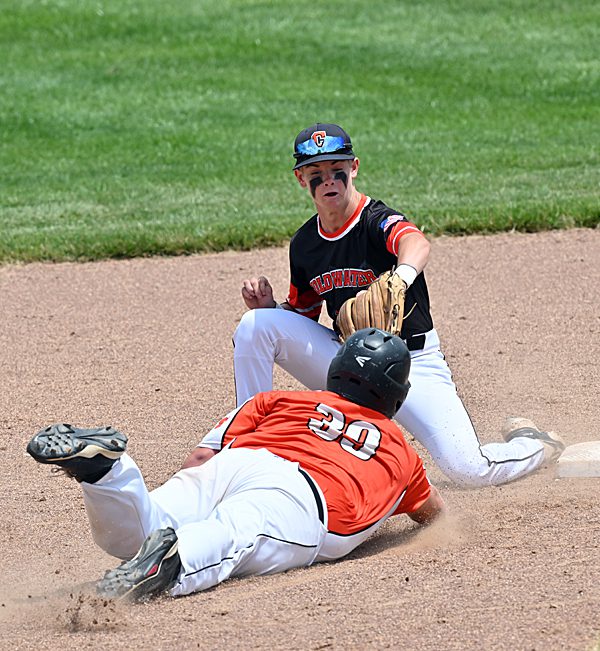 Coldwater caught Minster base runner Dane Schmiesing napping with this pickouff in the fourth.

“A lot of us from Coldwater don’t go out to play ‘select’ ball.  We’re rather stay here and try to keep the program moving, try to have the same chemistry when we get together next year for spring ball.”

The genesis of ACME baseball, itself, goes back to 1960 when then Coldwater coach Lou Brunswick helped bring it to west-central Ohio as a developmental tool for communities in west-central and northern Ohio that didn’t have American Legion baseball.

“ACME baseball is summer baseball in northwest Ohio,”  adds Wiss.  “What is it…from I-70 to Toledo and from the Indiana line to I-75, that’s basically where we’re at.  That’s ACME baseball, and that was created by Lou years ago, that and the whole thing about keeping people together?  Travel ball has become a big deal.  We all know that.  To some kids it’s crucial to their next step in baseball at another level.  To some kids it’s what other people do, so I’ll go do it, too.

“But to keep 95% of our kids from Minster together, and lose to a very athletic team like Coldwater today…we take a lot of pride in what we do here, too.  And ACME is an important developmental part of the camaraderie with our program.

“I tell people this.  There’s a reason I take our high school team to Tennessee every June for a week.  We play five or six games, I have those kids attention, and they hear what I say every day.  The same is true now during the ACME tournament.  [Coach] Jay Eilerman and I have their attention every day for three weeks, and if we could bottle what we accomplish in those three weeks and that week in Tennessee we’d really have something.”

Lou Brunswick won six state titles during his time as Coldwater’s high school coach.  Current coach Brian Harlamert has won two, and it came as no surprise that he sat behind home plate Saturday to observe.

“Because of the weird spring we had, we now have four starters that were hurt on this ACME team,”  said Harlamert.  “Plus we’re able to pull up four or five sophomores-to-be, and two of them were starters today.  So they’re able to come in, get developmental time in the summer, and I can’t say enough about Tom (Brunswick) and his passion for what he does.  It’s a group effort at Coldwater, and this is why we do it.” 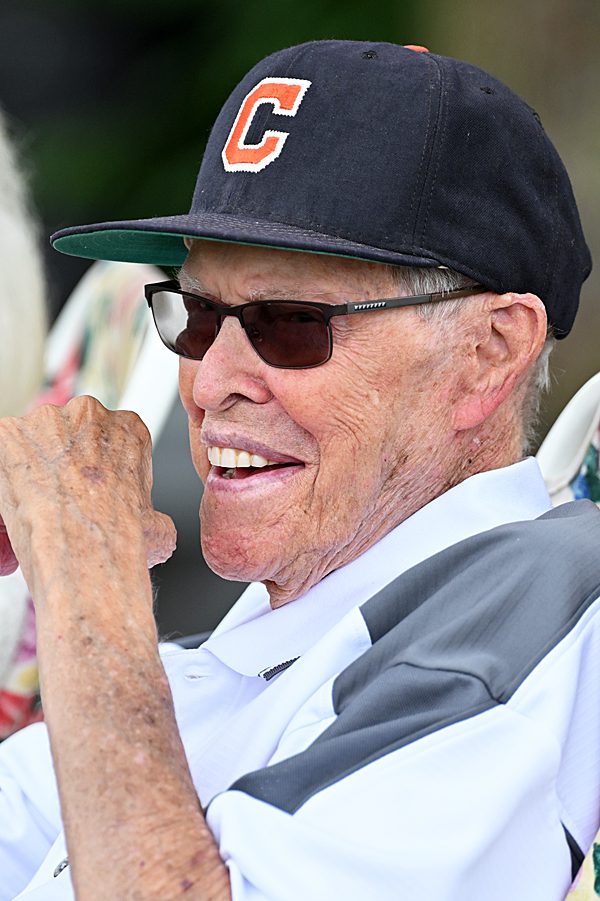 It started with Lou…hall-of-famer Lou Brunswick was on hand to watch the rewards of his vision, when he brought ACME baseball to Mercer County 62 years ago.

“Dad started this in 1960, in Mercer, Auglaize, and probably Shelby County,”  adds Tom Brunswick.  “There were twelve teams back then, and now I tell the kids that they’re lucky because there’s some areas of Ohio where they don’t have ACME.  The really good players in those places have the opportunity to play on the ‘select’ teams, but the marginal kids, or late-bloomers, may not get a chance to play at all.  This way, they not only get a chance to play, but play as a team and stay together in the summer.”

Lou Brunswick is now in his 90s, and will always be remembered for winning not only those six state titles…but 750 career games, acknowledged by many as the symbol of amateur baseball in west-central Ohio.

But lest it be overlooked, his most lasting contribution to baseball was that of vision…for understanding boys, and that they learn better, compete better, and become better people the longer they stay together.  And a lot of good things followed from where he sowed those early seeds.

And that’s the mission of ACME baseball! 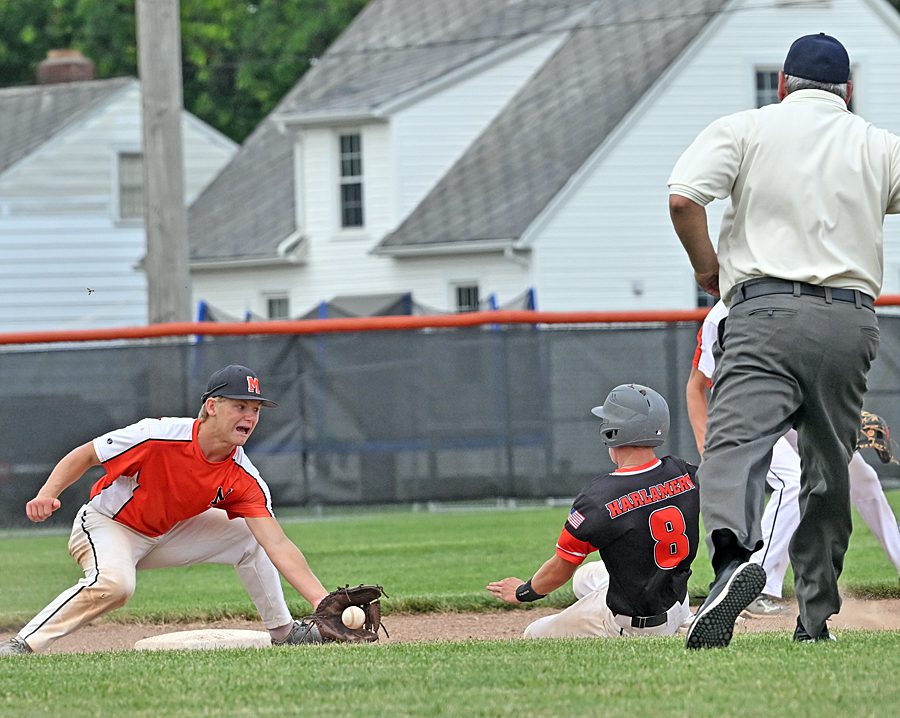