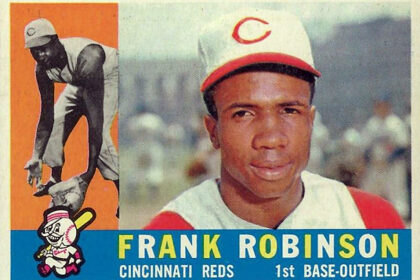 Sixty years later I smile at the story of my first ‘baseball card’ purchase, what it cost compared to the present, and at least one concerned adult who questioned back then…are baseball cards a good thing for kids?

A slow news day, someone wrote last week, pertaining to our coverage of Little League Baseball?

Let me digress for a few lines relative to yesterday’s news coverage of the 8% rate of national inflation, the cost of gas, and people’s fear of things yet to come.

Rummaging through an old box of stuff this week I found a small package that’s survived 60 years of adolescence, college, adult life, kids, houses, moving, and a change of priorities.  It was a box of baseball cards…a bit of childhood that had survived all that, out-of-sight and out-of-mind, and out of this world for their significance and comparison to the current economy.

Mine are hardly collectible.  When I put those particular cards away years ago I just threw them in a drawer with a rubber band wrapped around them.  If you graded them today collectors would say they’re worthless – the corners bent, the image faded, and the imprint of that rubber band.

But the story of how I got them is a testament to the passage of time, particularly to anyone who still buys baseball cards…for the cost of a baseball card now is far different than it was in 1960, when you bought them by the pack for a nickel and got six cards and a flat, stale piece of bubble gum.

But once upon a time, when I was in the third grade I bought my first package of Topps 1960 baseball cards at Mary Dowling’s General Store, in Chesapeake, Ohio…and the breathless experience of sitting down on the front steps of her store and peaking into the wax paper package to see – to dream – of getting a copy of a Cincinnati Reds player…say Vada Pinson, Roy McMillan, or Frankie Robinson.

I had been bitten the year before, my second grade year, on the school bus ride home from Chesapeake East Elementary when one of theolder fifth grade boys, Gerry Jerrells, had given me some of the duplicate cards from the packs they had bought during noon hour.  At that time you could leave the school grounds and go across the street to a gas station and buy a bottle of pop and a ‘moon pie’ for lunch.  Perish that thought today.  And one of those cards they gave me was a 1959 Roy McMillan, when he was playing shortstop for the Reds.  And because of that Roy McMillan would become my favorite Red, because of he looked like a nice guy, and he looked distinctive wearing those horn-rimmed glasses. 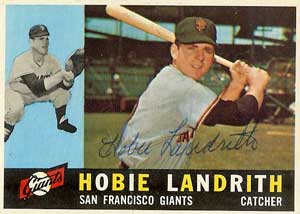 To my disappointment…Hobie Landreth as he appeared on the 1960 Topps cards, then playing with the Giants.

It was on a Saturday morning, school was out, and I went to Chesapeake with my mom and grandmother to the grocery.  Dowlings’ store was just across and up the street a block, and I had begged my grandmother out of a dollar bill – to buy some baseball cards.  She was generous to give me the dollar, but dubious.  She confused baseball cards with playing cards, playing cards were used for gambling, and she was adamantly opposed to that.  But she did give me the dollar.

Then, I had to convince Mom that a dollar spent on baseball cards was not going to plunge us in to financial ruin.  I owed it to my dad that it even happened.  He explained to her, “They’re just pictures of the baseball players we listen to on the radio.  They’re harmless, and if that’s how he wants to spend his money he’ll have to live with his choice – that or something else, but not both.”

Mrs. Dowling ran the store by herself.  Everything that came in and went out the door got her attention.  And while she loved the fact of boys buying baseball cards (it was a sale she wouldn’t have otherwise gotten), a nickel was still a big deal to an adult who had grown up during the great depression, just 30 years prior.  To her they were a silly waste of a perfectly good nickel!

But I proudly entered her store and selected a handful of packs from the open box of Topps cards that sat on her counter – about fifty cents worth.  She wanted the sale, but she told me, “I want to talk to your mother before you buy these.  Does she know you’re spending 50 cents on baseball cards?”

I was horrified.  What if she screws this up?  Nosey old woman…my big day ruined over Mrs. Dowling’s concern about baseball cards – impractical spending that could lead to something worse…and eventual eternal damnation.

But Mom bailed me out. 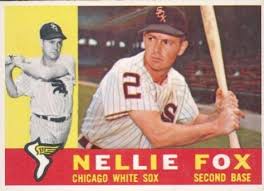 Nellie Fox…from 1960. His photos were all prominent for the big wad of chewing tobacco in his mouth.

“I don’t care if he has them,”  she said when she finally made her way from the grocery and came to find me.  “That’s all he’s talked about since spring.  Baseball and baseball cards.  Maybe we’ll get some peace once he gets tired of them.”

Purchase completed, I raced to the steps outside and couldn’t wait to see who I had gotten.  Carefully opening the wax paper, the first card was that of Giants catcher Hobie Landrith.  Now Hobie Landrith was a good player, I guess, but what a letdown.  In fact, the whole pack was a letdown.  The only name I recognized was Nellie Fox, the old White Sox shortstop, and a future hall of famer.

But I had nine more packs of hope, and I had them all opened by the time we got home.  To my eternal joy…there were a couple of Reds players, but no Frank Robinson and Vada Pinson.  To my temporary disappointment…it seemed that most of the cards were guys who played in the American League, guys I didn’t know because I couldn’t listen to American League games on my transistor radio.  There was a John Romano (Cleveland), and Turk Lown (White Sox), and other good players, just not what I had expected.

All of these memories came back to me as I carefully sorted through those old cards.  They weren’t all from that one day at Mrs. Dowling’s, but contrary to what Mom believed…I never got tired of looking at them and devouring the personal and statistical information on the back. 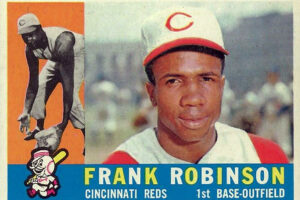 This was the one we all wanted…and hardly anyone got. At least I didn’t!

I’ll leave you with this.  Had that story occurred in 2022, with a box of Topps cards (a complete set) costing $199.00, there would be no story.  No anticipation, no excitement, and no Mary Dowling.  I don’t know what the inflation rate is compared to 1960;  but it doesn’t matter.  I wouldn’t have bought them.

Cards were cool then because they were close-up pictures where you could actually tell what players looked like – their features, and Roy McMillan’s horn-rimmed glasses.  They looked like people you could actually talk to – that worked in the off-season at the post office to feed their family.  Now cards feature action photos that shine, and shimmer and even have three-dimension.  Anything to jack up the price, I’m sure, and the bottom line.

Inflation?  We’d never heard of it back then.

All we knew was that a pack of baseball cards cost a nickel.

And I never did get the Frank Robinson card!

Thoughts On The Boys State Tournament…Mine And Yours