For the second time this week, pitching dominated at the district round of the tournament, this time in Division II as Hamilton Badin’s Nik Copenhaver outdueled Tipp’s Max Dunaway to win, 1-0.

Pleasant Hill, OH – Hamilton Badin assistant coach Bret McKinney pointed them out as they warmed up prior to Thursday’s Division II district final game with Tipp City.  In a matchup of #1 seeds, the Rams had a handful of Division I college recruits at key positions on the field – notably, their battery.

Catcher Jimmy Nugent will play for Penn State next fall.  Junior starting pitcher, Nik Copenhaver, is committed to play in the PAC 12 for Washington STate in two years, and left little question as to his worthiness after throwing a 2-hit shutout over the Red Devils, striking out 7 without walking a batter.

Boasting a fastball in the low 90s, he simply overpowered Tipp hitters, who with Preston Zumwalt and Matt Salmon batting in the heart of their order, have shown all year their ability to catch up with ‘ol #1.  But not Copenhaver’s.

“He’s the top pitcher in the Cincinnati area, and the hardest thrower we’ve seen this year,”  commented Tipp coach Bryan Gronski.  “We knew what he was going to be like, and we tried in practice to prepare for that kind of velocity, but in a game situation it’s tough adjustment and we just weren’t able to make it.

“We preached to the guys all year that when we get to the tournament it’ll be two teams with ace pitchers going at it, and Max (Dunaway) put us in a position to win.  He threw great baseball and only gave up a couple of hits himself.  We just needed more than a couple of hits in one inning to squeeze some runs across.”

Dunaway, a sophomore, gave Tipp exactly what it needed in a contrast of styles with Copenhaver.  He slowed the pace of the game, pitched deliberately, and where Copenhaver blew the ball past hitters from the passing lane…Dunaway changed lanes, featured the changeup, and kept the Ram hitters guessing and lunging after a 75 mile-per-hour pitch that just kept drifting away and down out of their reach.  Badin could only muster four hits as Dunaway struck out four, and walked a couple, but proved that if hitting is timing…he was more than capable of screwing up that timing. 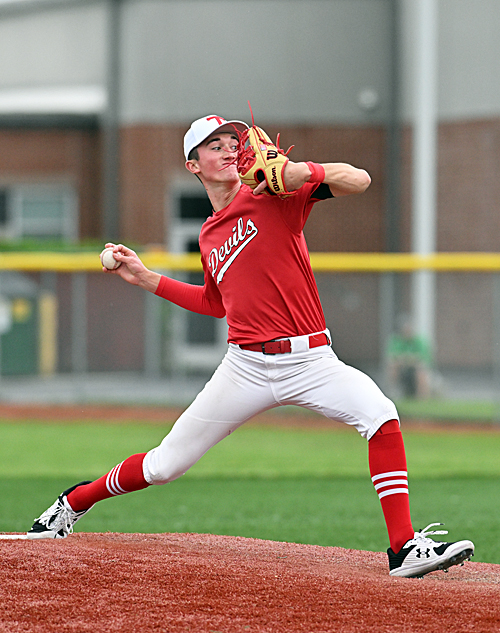 Max Dunaway gave the Red Devils his best when they needed it most – one run on four hits, and struck out four in a complete-game effort.

Tipp got some guys on base, but never more than one in an inning.  Their two hits belonged to Preston Zumwalt in the first inning…and to Matt Salmon in the sixth, both singles.  Badin committed a couple of errors, and Copenhaver hit Braydon Bottles with a pitch in the third inning, but first base was as far as any of them got.

The only run of the game came in the fourth.  Hamilton left fielder Rodney Rachel led off with a single, stole second, advanced to third base on a sac bunt, and scored on a ground ball out to shortstop Landon Turner.  Oddly enough, Rachel didn’t get a great jump off third as the ball was hit, and Turner would have had a shot at throwing him out at the plate.

Copenhaver responded the way pitchers of his ilk are supposed to respond.  He got tougher over the final nine outs.

“I was trying to stay at about 80% (velocity) today, and just be smooth and efficient.”  said Copenhaver, afterwards.  “I felt like I could have gone a lot more innings because my arm didn’t feel anything (fatigue).  It was just a good day for all my pitches.”

But in the top of the seventh, against the #6, #7, and #8 hitters in the Tipp order, he noticeably kicked it up a notch.  First baseman DJ Martin popped up weakly to right field, and Tyler Minnich and pinch-hitter Jacob Bowerman were no match for the closeout fastball.

For his part, it was far and away the best performance of the year for Max Dunaway.  Unfortunately, it came against the best countering competition he’d seen all year. 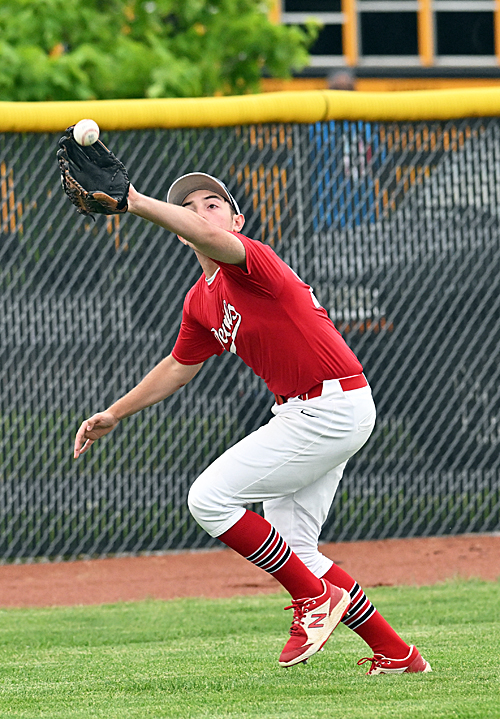 Game of inches…Tipp’s Tyler Minnich got a glove on this drive to left in the third by Badin’s Landon Divourek, but couldn’t haul it in.

“They were a really good club…obviously a lot of Div. I commits,”  said Dunaway.  “I threw a lot of changeups, curveballs, tried to keep everything low.  We had a couple of errors, but we got through that OK.  Umpire behind the plate was great…it was a good day.  We were just on the wrong side.”

Badin moves on with a 23-6 record, on 1 runs, four hits, and committed two errors.

Tipp saw its season come to an end with no runs, two hits, and likewise, committed two errors.

“It was a good year for us,”  said Gronski.  “We’ll lose some seniors that will be tough to replace, but we also had the opportunity to get some young guys in…and I loved the way Max threw today because that’s a good way to go into next year.  You like for your pitcher to work quick sometimes to control the tempo of the game.

“But sometimes you can control the tempo by slowing it down, upsetting their timing, and he did a good job of that.  His changeup was dynamite today.  We needed him to piece it all together, and that’s what he did.” 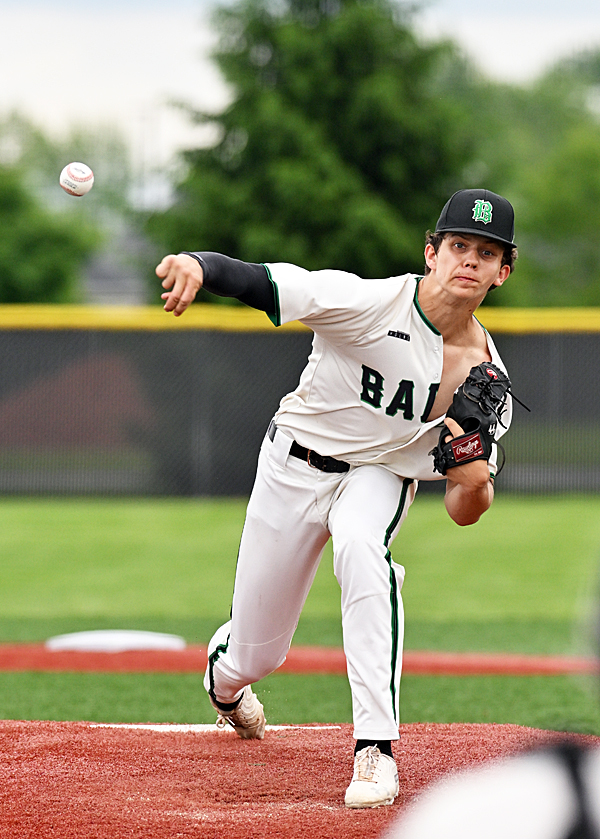 Washington State commit Nik Copenhaver throttled the Tipp hitters with the best fastball they'd seen all year - just two hits allowed, and no one got beyond first base. (Press Pros Feature Photos)