Versailles’ Carson Bey and New Knoxville’s Ellie Gabel have been chosen as the 2022 Press Pros sponsors’ scholar-athlete award winners, and their case for consideration was hard to ignore.

Carson Bey is a three-sport participant for the Tigers – football, wrestling, and baseball – but gained the most recognition for being the quarterback on the Tigers’ 2021 OHSAA Division V state championship team in football.  It was the Tigers’ football first title since the Al Hetrick era, in 2003, and most who followed that team acknowledged that for his leadership, competitiveness, character and experience, Carson Bey was an indispensable figure in their success.

He balanced his leadership in competition with that in the classroom, ranking 14th in his class, compiling a 3.95 GPA, and scoring 29 on the ACT.  His next challenge will be to succeed as an architecture major at Ohio State in the fall. 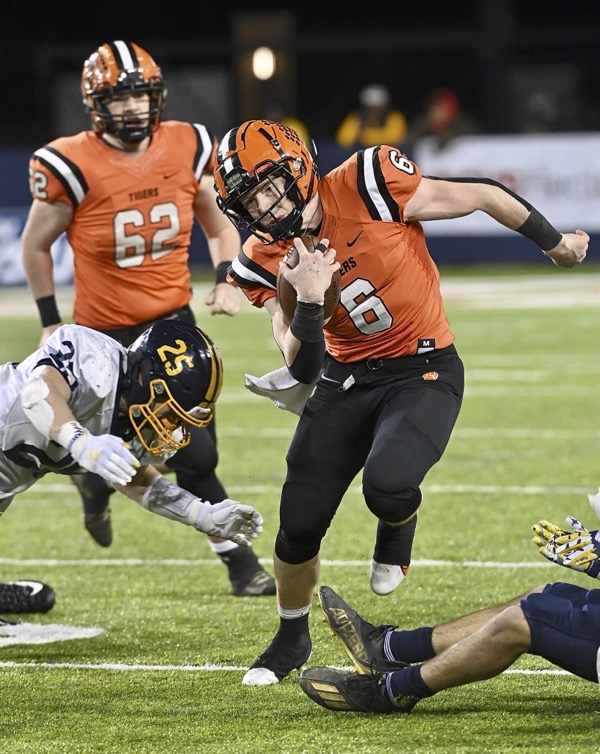 Carson Bey led Versailles to its first OHSAA football title since 2003. His teammates call him ‘Pizza’. He always delivers.

In his personal essay, Bey wrote of the importance of representing yourself and your team on the field and in the classroom with dignity, respect, and leadership.

“I felt like my sports teams, and classmates, looked to me as a leader.  I have dedicated myself to perform at an elevated level in both.”

As a side note, we discovered during the year that his teammates and friends call him ‘Pizza’.  “Why”, we asked?

Because he always delivers…was the answer!

New Knoxville’s Ellie Gabel becomes the first from her school to be selected for the Press Pros sponsors’ honor.

A two-sport standout in both volleyball and basketball, she helped lead the Rangers to the Division IV OHSAA volleyball title in November, then nearly pulled off the competitive perfecta as a member of the Division IV state runners-up in Division IV in basketball, in March.  One of a remarkable group of all seniors to play both, she credited their small community togetherness and friendship since elementary school as a big factor in their success.  Their win over MAC rival in the Div. IV title game stands as the first volleyball championship in the history of the school.

In basketball she averaged 13.5 points per game during the Rangers’ 20-2 season, and her outside shooting was a prominent factor in their perfect 9-0 conference mark…again as part of a senior-group that impressed for their ability to be more than just 20 win basketball team.  Teammates and foes alike were known to single out Gabel for her selflessness, and attitude for caring about others.  It’s not surprising, then, to learn that she plans on attending Tiffin University in the fall to major in Special Education, her next step in caring about others. 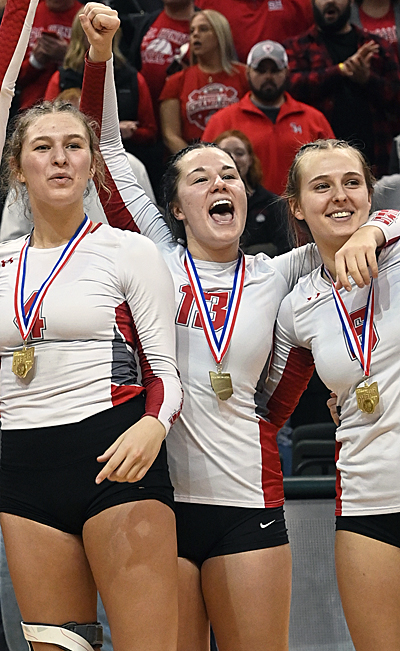 What Ellie Gabel (center) has learned from her high school experience:  Take nothing for granted…one day at a time…and spend time with the people you love.

From her personal essay: “We played through the tragedy of losing our coach’s husband the week of the state finals.  Everything inside of me broke.  I fell to my knees when I heard the news, and just cried.  Our hearts hurt for Meg and her daughter, Bradie.  So we decided to come together as a team and play to bring joy and some light to them…and our hurting community.”

“Losing to Waterford in the state finals (basketball) hurt so bad because we had worked so hard, came so close, and lost.  It was the last time to wear a Ranger jersey…the last time playing with my dad…and the last game for our coach, Tim Hegemier.  We wanted to win for him.  It’s a feeling that I’ll never forget.

“Here’s what I took away from these past two seasons (volleyball and basketball):  Never take anything for granted…Take one day at a time…Live in the moment…Spend time with the people you love.”

Recipients’ applications are ranked by panel of independent retired teachers and guidance counselors, based on grade point average, ACT/SAT score, athletic accomplishment, and personal essay.  Carson Bey and Ellie Gabel will each receive the Stan Wilker Memorial Scholarship in the amount of $2,500 to help further their academic pursuits this fall.  The Press Pros sponsors MAC scholar-athlete awards are made possible by the following area companies and contributing sponsors: 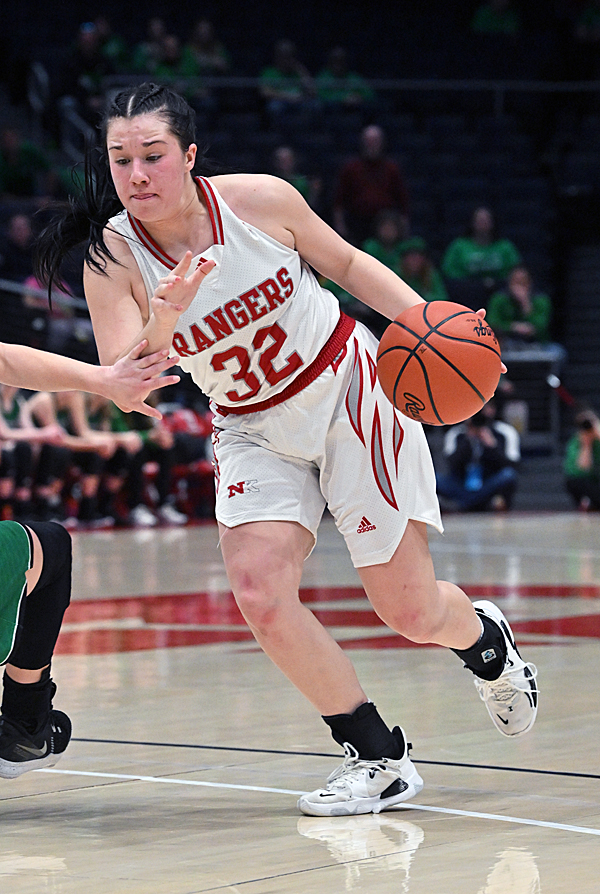 New Knoxville's Ellie Gabel (above) was a member of the Rangers' state champion volleyball team in 2021, and their state runners-up team in Division IV basketball. (Press Pros Feature Photos)