On a brutal day to pitch, catch, bat, field, or do almost anything baseball, the Buckeyes saw an early lead slip away and dropped the series opener to Purdue, 7-5.

West Lafayette, IN – First, the good – the positive – on Ohio State’s 7-5 loss Friday afternoon to Purdue in their Big Ten opener against the now 18-1 Boilermakers (1-0 in Big Ten play).

Sophomore Kade Kern, coming off a 3 for 4 performance Tuesday in the Buckeyes 7-5 win over Wright State, struck in the second inning driving a fastball off Purdue starter Jackson Smeltz over the left center field wall for his first home run and 13th RBI of the season to give the Buckeyes and starting pitcher Isaiah Coupet a quick 1-0 lead.

Better, in the third inning, after a Zach Dezenzo single and a walk to right fielder Mitchell Okuley, Kern came up again and drove another Smeltz fastball over the left field wall for his second home run and 14th, 15th, and 16th RBIs of the season.  The Buckeyes had a commanding 4-o lead with Coupet having cruised through the first two innings, showing signs of pitching confidently against the heretofore nearly unbeatable Boilermakers.

Now, the not-so-good news.  That lead wouldn’t hold up on a miserable day for baseball – cold 42 degree temperatures and wind gusting to 25 miles-per hour – against a Purdue team that took it upon itself to take a better, more efficient approach against Coupet the second time through the batting order. 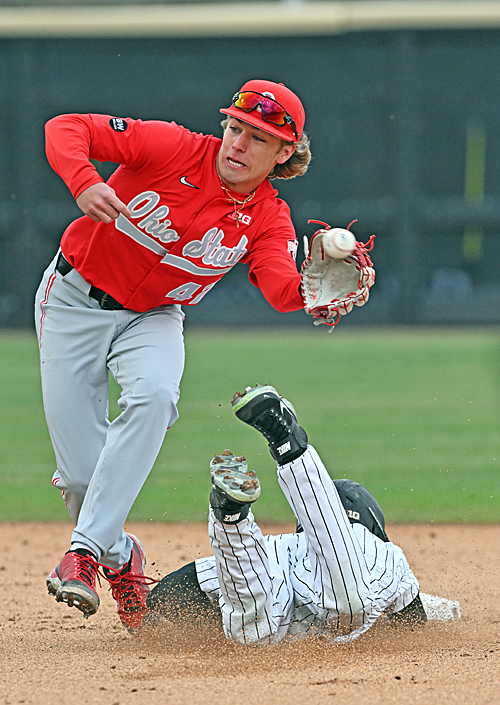 Tyler Pettorini reaches for an errant throw from Archer Brookman on a steal attempt by Purdue’s Mike Bolton in the fourth inning.

In the bottom of the third the Boilers sent seven men to the plate, scored 4 runs on 5 hits with a pair of two-run home runs by centerfielder Curtis Washington and first baseman Cam Thompson.  And that thing called prosperity, that’s supposed to buoy young starting pitchers and make them feel invincible, was gone.

The Buckeyes, to their credit, retook the lead in the top of the fourth on a leadoff walk to Drew Reckart, a balk by Smeltz, a single by Archer Brookman, and a sac fly to center by Marcus Ernst, chasing Smeltz from the game.  Reliever Landon Weins came on to pitch, and on a day when any well-hit fly ball was destined to the leave the yard…the Buckeyes couldn’t take advantage of either the wind, or Weins.

“Coupet just wasn’t executing with his fastball,”  Greg Beals explained, post-game.  “Not like he needed to.  They were on his fastball, and he needs to throw the fastball enough to get them off his breaking ball.  He just has to execute better.

“He needs to be a little more efficient, and that’s where the fastball is critical.  He needs to execute with it, because his stuff is good.  But the more they see his breaking ball the more likely they are to be on it.  And it wasn’t the breaking ball that caused him problems today.”

Coupet would pitch into the fourth, get one out before a double by the #9 hitter, Evan Albrecht, and a walk to leadoff hitter Mike Bolton brought Beals to the mound to get him. 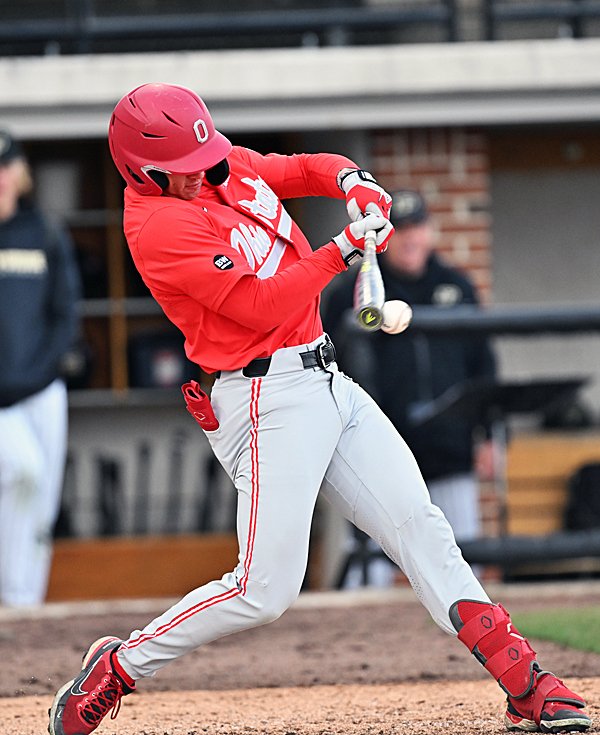 Crushed…Kade Kern abused the baseball, with a pair of home runs and four RBIs in Friday’s loss to Purdue.

Freshman Jake Johnson came on, who has pitched so well in his previous five appearances, and allowed an inherited run to score on a throwing error by catcher Archer Brookman attempting to throw Bolton out while trying to steal second base.  Johnson regrouped and retired the side on a fly ball to left and a pair of strikeouts.

The Buckeyes would have their issues with Landon Weins, who pitched the next five innings, surrendering just 2 hits, while striking out two and throwing just 61 pitches.

“Give him credit,”  said Beals.  “Weins did a good job and did it by mixing three pitches for strikes.”

He kept the ball down, and allowed just two hits over the final 15 Buckeyes at bats.

Johnson wasn’t so lucky.  Coming out for the fifth, he gave up a well-hit, but wind-aided triple by Cam Thompson that ricocheted off the center field wall, just out of the reach of Kade Kern.  He scored one out later on a ground ball out to Drew Reckart, Purdue taking the 6-5 lead. 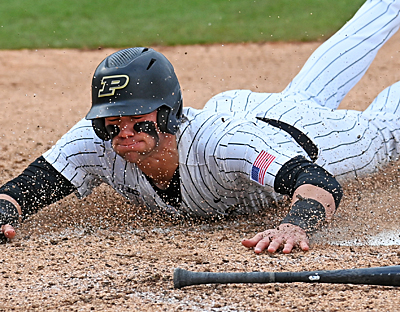 Purdue’s Cam Thompson trades a face full of dirt for a valuable insurance run in the seventh.

They would add another single run in the seventh, Thompson scoring from third base on a wild pitch by reliever Nate Karaffa, to take a 7-5 lead.

Ethan Hammerberg came on in the eighth to retire the Boilermakers in order on just nine pitches.

Then Weins did the rest, choking off any thoughts of a comeback in the top of the ninth by retiring the side in order.

The Buckeyes dropped to 8-12 for the year, with 5 runs on 7 hits and committed one error.

Purdue improved to an amazing 18-1 mark, with 7 runs on 10 hits and played error-free baseball.

Weins got the win, and Jake Johnson, who pitched better than his outcome, took the loss, his first of the season.

Promising…after the 4 early runs, a two-hit day for Kern and a two-hit day for Zach Dezenzo…and the likelyhood of getting something up in the air over the last five innings that would put Purdue’s back to the wall.  It didn’t happen. 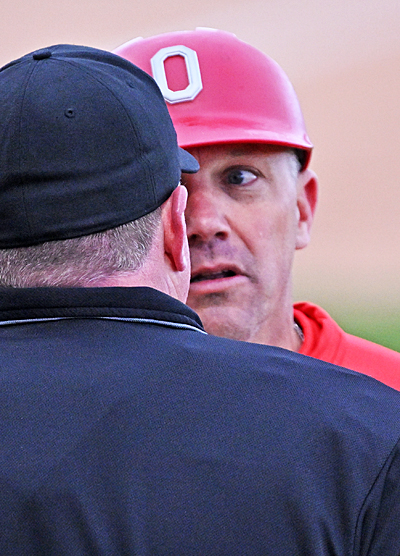 The bright light was Kern – the good news – who admitted carrying over momentum from the Tuesday game against Wright State.

“The last few games I’ve been having quality at bats and today I got a few good pitches to swing at,”  he said, post-game, understandably disappointed that his contribution didn’t come with a winning outcome.  “I’m having more confidence from the past few games, today, and there’s a bunch of us like that right now.”

Which bodes well, long-term.  But short-term they need to flush Friday, the weather, and bow their necks for what promises to be another challenging day on Saturday.

“It was good to get him (Kern) going today,”  said Beals.  “He’s a middle-of-the-lineup hitter, and a productive bat for us, and the three-run homer put us up 4-0 and in a good spot.”

Flipping the switch for tomorrow….? 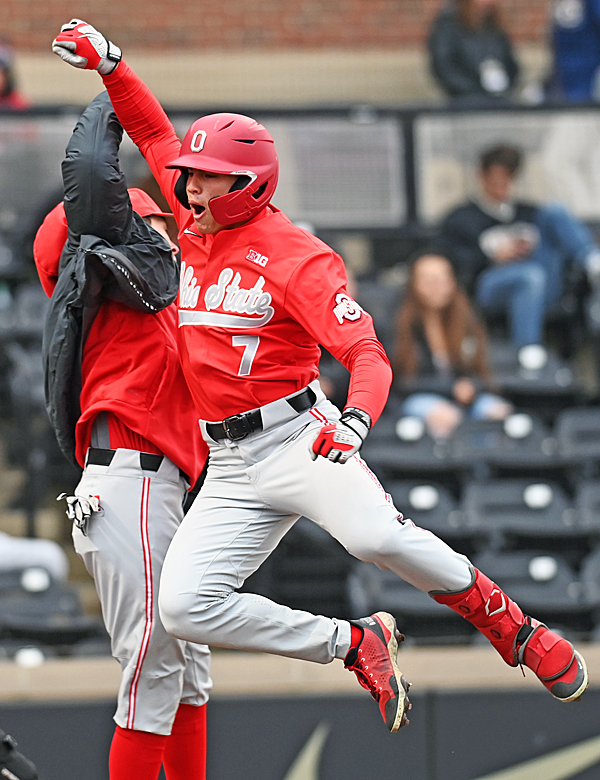