True Story; Maybe You Heard It: OSU Not Tough Enough

A familiar theme seems to sound every time Ohio State falls short, as it did Saturday against Iowa in a loss that severely damages the Buckeyes’ hopes of winning the Big Ten.

Columbus, OH – The below-the-belt blow that doubled Ohio State over to end last season made this year a start-to-finish referendum on whether the program is ascending or simply hovering.

Right now, the verdict on that issue remains no better than a three-steps-forward-and-one-step-back evaluation with six games remaining over the final two weeks of the regular season.

An uninspiring, ragged, head-scratching 75-62 loss to Iowa on Saturday inflicted Ohio State’s first home loss of the season and gave away its scheduling advantage over the other teams chasing the Big Ten title.

The Buckeyes (16-7, 9-5) now sit a game behind Illinois, Purdue and Wisconsin in the loss column and lag the Badgers by two in the win column and the Illini and Boilermakers by three apiece.

That all but dismisses any chance OSU had of winning the title and, given some of its previous failures in other conference games, leaves a high mountain to climb if it’s to grab a top four seed in the upcoming NCAA Tournament.

They certainly will not be a No. 2 seed, as they were last March when 15th-seeded Oral Roberts defeated them in overtime to inflict the worst post-season loss in OSU history.

That defeat officially – even if not, fairly – ended head coach Chris Holtmann’s honeymoon with a fan base that has always treated basketball as a convenient diversion between the two most important seasons on the calendar – football season and spring football season.

Buckeye Nation seems to take basketball irrelevance a lot better than it does basketball flirtation with greatness. 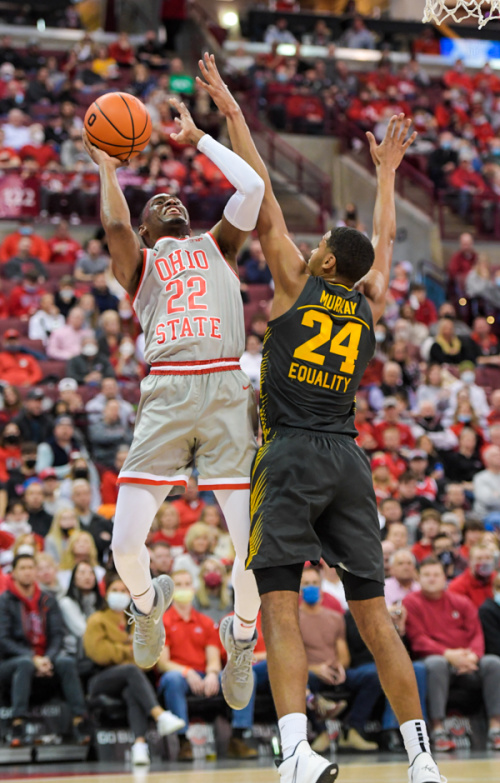 So Holtmann has somewhat become, like Thad Matta before him, a victim of the expectations he’s created with his success through his first four seasons.

Now, in year five of his regime, with a roster unmatched in experience across the Big Ten and all of Division I, a lot was expected from this Holtmann team.

But after the loss to Iowa, and with a trip to Illinois looming Thursday after a 7 p.m. Monday home game with Indiana, what OSU has delivered so far is an unspectacular helping of meatloaf and mashed potatoes to satisfy a seven-course palate.

The Buckeyes are far from the worst team in the league, but they are also far from the best, having allowed far too many winnable games to slip from their grasp at Indiana, at Rutgers and now against the Hawkeyes.

OSU couldn’t latch onto enough defensive rebounds, nor could it maintain possession often enough to avert blowing a 21-10 lead it grabbed in the first seven minutes.

“They beat us to a lot of loose balls,” Holtmann said. “We obviously have to get better at that. We struggled making shots, but our turnovers and our rebounding were the two issues that were most glaring to me.”

After Ohio State pulled within six with 2:31 to play, Iowa took and missed three shots and yet still got a fourth chance that Connor McCaffery cashed with a knife-in-the-back three-pointer.

Is it? Maybe, for recruiting too many tweener-ish wings, not finding or developing a transformative point guard or ingraining enough of a nasty streak throughout the roster. 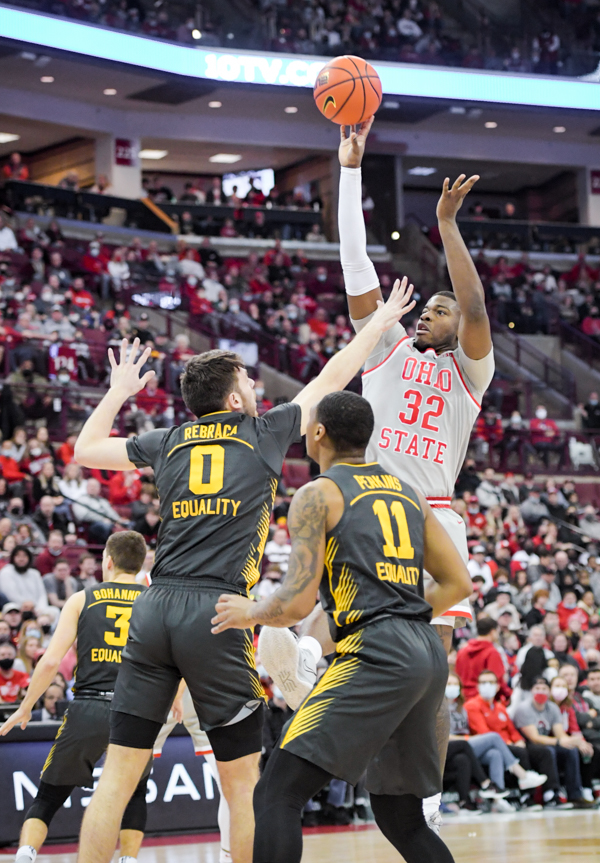 But some of it is also on the guys who wear the uniform. They seem a collegial enough bunch, but clearly something is missing or Holtmann wouldn’t forever be lamenting his team’s lack of “force and physicality.”

That’s a nice way, but not a difficult-to-discern way, of saying he has a soft team that gets out-toughed by too many opponents both physically and mentally.

Indiana and Wisconsin – the first a team OSU should beat no matter where the game is played, the latter one the Buckeyes hammered by 18 in the teams’ first meeting – did everything but de-pants Holtmann’s players in losses last month.

Rutgers scored the last 10 points to wipe out an eight-point Ohio State lead over the final three minutes.

Earlier this week, Holtmann campaigned hard for junior E.J. Liddell to be included in the conversation for league MVP.

Liddell had 15 points, eight rebounds and five blocks against Iowa, which is an excellent stat line.

Iowa’s Keegan Murray scored 20 in the first half, though, and 24 for the game.

It’s Murray, Purdue’s Jaden Ivey, Illinois Kofi Cockburn and Wisconsin’s Johnny Davis who are, and should be, mentioned ahead of Liddell in the league MVP conversation.

Ohio State can’t win if Liddell isn’t the best player on the floor, which might be an unfair burden, but it’s also a fact.

While the Iowa loss isn’t on Liddell, it’s a result of Liddell just being ordinary for Liddell, which is not a luxury the Buckeyes can afford, or one you’d think he’d allow knowing how his coach went to bat for him only days earlier.

Liddell’s lack of dominance was most glaring on the glass, where Iowa wound up with a 40-31 advantage.

Inexcusably, OSU was even outrebounded at the Iowa end, where the Hawkeyes grabbed 20 offensive boards to Ohio State’s 19 defensive rebounds.

That resulted in 18 second-chance points for Iowa, which also bothered OSU into 14 turnovers, six more than the Hawkeyes committed.

Now comes another challenge on Monday, for both Liddell and the Buckeyes, in the form of Indiana and 6-9 Trayce Jackson-Davis.

In a 67-51 loss at IU on Jan. 6, Liddell had 11 points and nine rebounds, while Jackson-Davis did everything but tattoo his footprint on Ohio State’s forehead with 27 points, 12 rebounds and five blocks.

That’s a lot of force and a lot of physicality, the likes of which OSU more often laments than delivers. 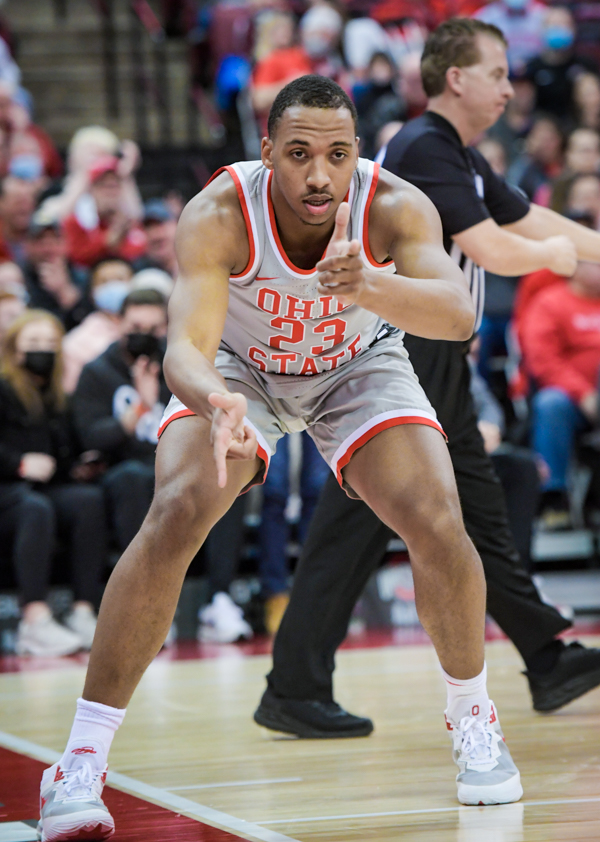 Zed Key had the finger cannons out to celebrate his three-point play opportunity, but he and the Buckeyes needed more rebounds in order to avert a loss to Iowa (PressPros Feature Photos by John Hulkenberg)