Powell, OH — For a good part of a Senior Night showdown at Olentangy Liberty, Hilliard Davidson standout senior guard Jayden Nervis couldn’t throw it in the ocean. Three times, coach Tim Congrove sat him on the bench, hoping he could gather himself and escape a miserable and very atypical funk.

“I was just struggling all night long,” Nervis said. “Give Liberty credit. They were making things tough on me, and all of us for that matter. But I think it was more a matter of me being in my head. But somehow, some way, I found a way and that’s been a trademark all year for this team.”

Nervis caught an inbound pass under the basket from Cole Carter, fumbled it for a moment, then found all net as the buzzer sounded, giving Davidson an unlikely 50-48 win over Liberty. It was the only lead the Wildcats had, and apparently needed, all night in this defensive slugfest.

“Actually, the fumble worked to my advantage because Cooper (Davis) jumped and I was able to to find a little bigger opening to get the shot over him,” said Nervis, who came in averaging 15 points per game. He missed his first 10 shots. He made all of his four baskets and scored eight of his 10 points in the final five minutes.

“The final inbound play was designed for Jayden, so it wasn’t a matter of making a lucky shot,” said Congrove, still trembling minutes after the game. “But, let’s face it: Liberty controlled 99 percent of this game, or at least it felt that way to me. They kept us out sync all night. Our guys found a way once again, and now we have our fate in our own hands as far the league championship goes.” 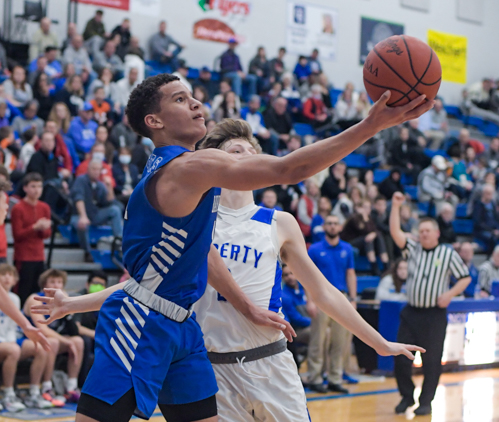 Hilliard Davidson’s Cole Carter gets inside the Liberty defense.

The win pulled Davidson into a three-way tie with Liberty and Upper Arlington in the wild and wacky Ohio Capital Conference Central Division race. All three teams are 6-3. Davidson (14-6) will play at Upper Arlington (16-4) Friday with a share of the title at stake. Liberty (12-9) will play at Olentangy Orange (13-6) on the same night.

Liberty coach Greg Nossaman was clearly unnerved after watching his team squander a four-point lead in the final 19.3 seconds.

“We had that game won,” Nossaman said. “I feel bad for the kids because they really wanted to win this on their home floor on Senior Night in front of as big crowd. Sometimes games like this come down to things even out of the players’ control. That’s high school basketball for you. The worst part is we don’t get to play again until next Friday. We have to re-live this for a whole week. Hopefully, that will build some resolve in these guys.”

Even before the last-second shot sent Davidson fans rushing the floor, the game took a series of odd turns. 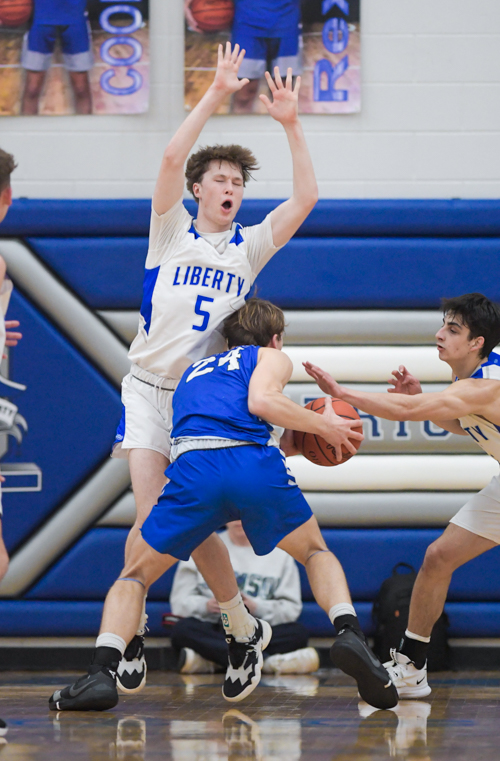 With Nossaman rewarding three of his seniors a rare start in Senior Night gesture, Liberty raced to a 12-2 lead.

After Davidson fought back to pull even three times, Liberty secured what seemed like a safe four-point lead in the final minute.

After drawing what the visiting fans thought was a controversial foul call, Davis sank two free throws to make it 48-44 with 27.5 seconds left.

After a timeout, Alex Okuley overthrew Davis on a length-of-the-floor inbound pass, returning the ball to Davidson under its own basket.

Davidson worked a designed play to the corner, where Daniel Neidert nailed a three-point shot to tie the game with 12 seconds left.

“Jayden got denied and I was the other option,” said Neidert. “I can’t explain it, but we’ve been good all year at coming through in tough situations. It almost feels like destiny. We won our last game on buzzer-beater (by Ryan Paris) last Saturday against (Dublin) Coffman.”

With the sharpshooting Davis bottled up, as he was most of the second half, point guard Trey Majidzadeh tried one his patented spin drives to the basket but was sandwiched by two defenders and lost the ball out of bounds.

Davidson tried a long inbound pass that was tipped twice before going out of bounds with 1.2 seconds left, setting up the epic winning play.

“I think I’ve made six or seven of those in my lifetime, and two this season, but given the circumstances this one was the sweetest,” said Nervis, whose mother is an Army staff sergeant based at Rickenbacker Air National Guard base south of Columbus. They family settled here last season after bouncing around to locales such as North Carolina and Houston.

Peyton Frey had 15 points to pace Davidson. Neidert added 11, Nervis 10 and Carter nine. Congrove gave a shout-out to Paris, who was largely responsible for guarding Davis, a Toledo signee who managed just four of his 14 points in the final 15 minutes.

“We were trying to throw two defenders at Davis to limit his shot attempts and at Majidzadeh to keep him from getting into the lane,” Congrove said. “In turn, Liberty did a great job limiting the guys who are usually our top scorers. Our so-called “other” guys are the ones who pulled his through tonight.” 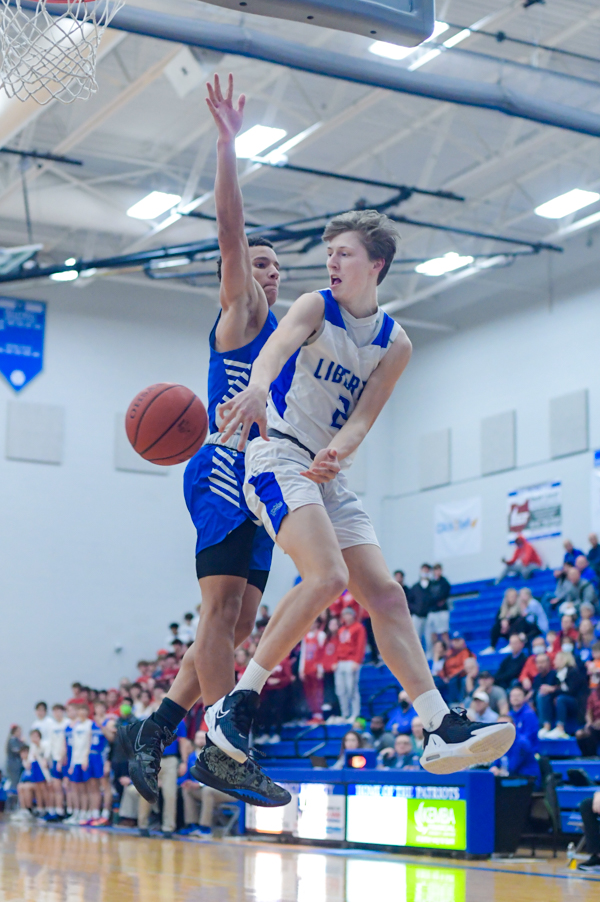 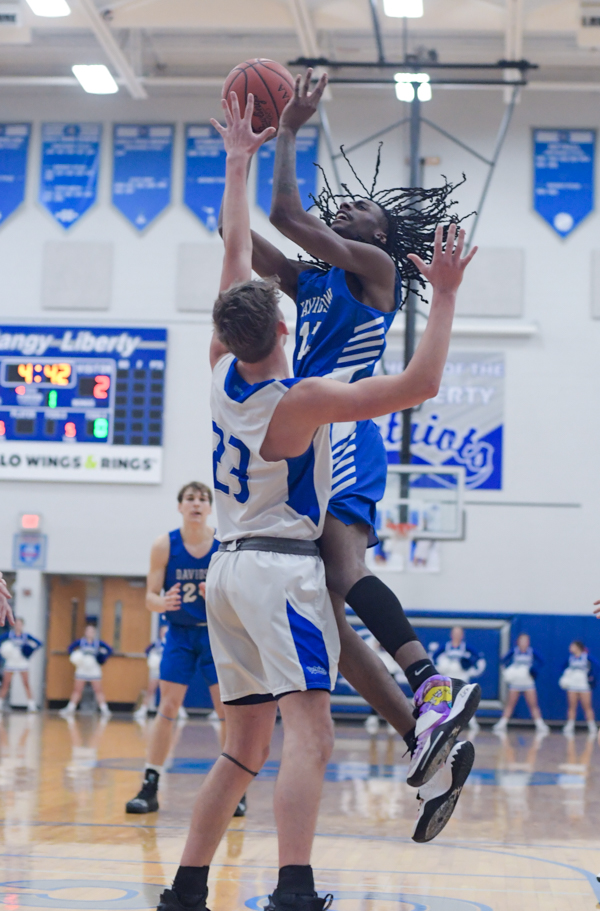 This one wasn't the game-winner, but Hilliard Davidson’s Jayden Nervis shot over Olentangy Liberty’s Cooper Davis here and at the finish of another pulsating Wildcats' win (PressPros Feature Photo by John Hulkenberg).