There weren’t many points, thanks to great defense, and Sidney made the most of the ones they got to squeeze past Tipp City Tuesday, 45-42.

Sidney, OH – No one really saw this coming from two of the Miami Valley League’s most dynamic scoring teams.

What are the odds?

But that’s exactly how it was Tuesday night as Sidney pulled off the surprise win over Tippecanoe, 45-42.

The win, by itself, was not so surprising.  Sidney is a young, and talented, and improving basketball team…well-coached by veteran John Willoughby.  But the manner in which they did it was surprising…and impressive.  Losing to Tipp a month ago on the road, Sidney struggled in all phases of the game that night, but two stood out.  They weren’t patient, and they didn’t defend and rebound, allowing Tipp to go up by as many as 22 points in the second half.

Tuesday was another story, as the two teams slugged it out in the first half…Tipp leading by 9-6 at the end of one quarter, and Sidney leading 17-16 at halftime. 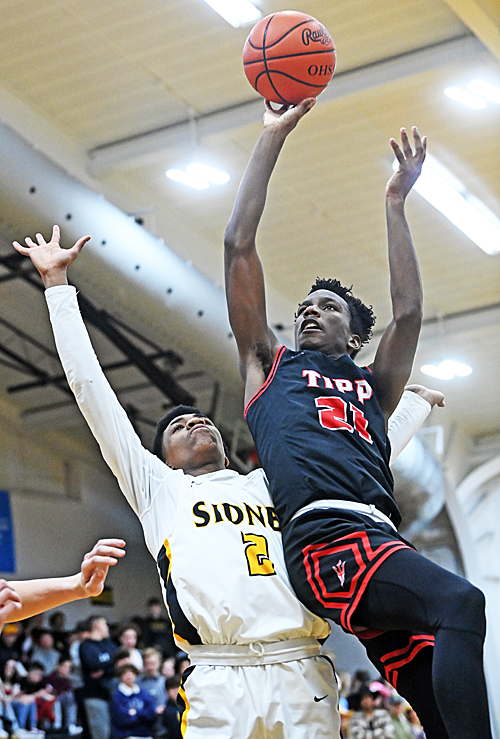 “There was some serious defense tonight,”  Tipp coach Adam Toohey would say afterwards.  “We just needed the Lord to be us for one more shot at the end.”

Trailing by three as time ran out, Liam Poronsky’s half-court three bounced off the rim for what would have sent the game to overtime.

“It was a super physical game and we struggled to screen them well.  So we never got downhill and into our drive and kick stuff.  They played great.  We need to play better than that.  They made us struggle to score.”

For Tipp it had that feel of a game where nothing was going to come easy.  And Sidney saw to that with a defensive effort about which John Willoughby would later claim, “We were outstanding, man.  To hold all of their shooters down – Garlitz, Clyne – all the way around, it was an exceptional job defensively.”

To use Toohey’s words, they never got into their customary rhythm of drive penetration and kick it back out for open-look threes.  Someone in black and gold was always in the way, or had a hand on the ball.

Layups in the paint were denied as time after time Sidney had one, or two, hands on the basketball as a Tipp player left his feet to score.

Tipp was sloppy with the ball.  Turnovers became epidemic in the second half when they were fighting both Sidney and the clock – careless passes, Cole Coppock attempting to dribble-drive through traffic in the lane, and the ‘Jackets simply ripping the ball away from unsuspecting Tipp ball-handlers.  There’s a term in basketball called being strong with the ball, and that perfectly defined a deficiency that eventually led to 14 Tipp turnovers in the game – 14 possessions they couldn’t afford to lose. 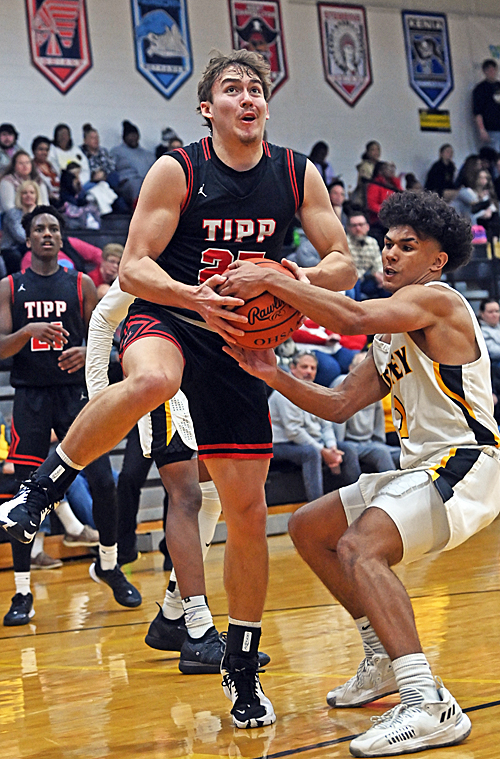 But for all but four minutes Tipp’s defense was just as tenacious, giving as good as it got, and denied Sidney in the same manner that Sidney was denying them.  Those four minutes came at the start of the third quarter.

And regroup they did.  Out of the timeout Cole Coppock hit a three-pointer from the wing.  Gavin Garlitz grabbed a Sidney turnover and scored.  There was an empty possession by Sidney, another Tipp bucket, and in a span of two minutes Tipp had erased that deficit with a 10-0 run of their own.

“We only had three timeouts left, and I hate to burn one in a situation like that,”  said Willoughby.  “I was hoping we could play through that run.  They went press and we scored a layup against the press and that helped settle us down.”

Sidney led 30-25 at the end of the quarter, and came right back at the start of the fourth and kept finding open shooters inside around the rim. Tipp couldn’t defend the post throughout the second half and Swiger made the most of it, scoring 9 points in the third quarter, alone.

But Tipp’s pressure allowed them to edge back, as some empty possessions and a pair of turnovers cut into that 5-point lead.  Trailing 38-37, Stanley Clyne went to the line for Tipp to shoot one-and-one, hit them both, and gave Tipp its first lead of the second half, 39-38.  At 1:18 they led 41-38 when Sidney’s Sam Reynolds scored on a driving layup and drew an intentional foul out of bounds by Clyne.  He split the pair of free throws awarded on the foul to tie the game at 41-41. 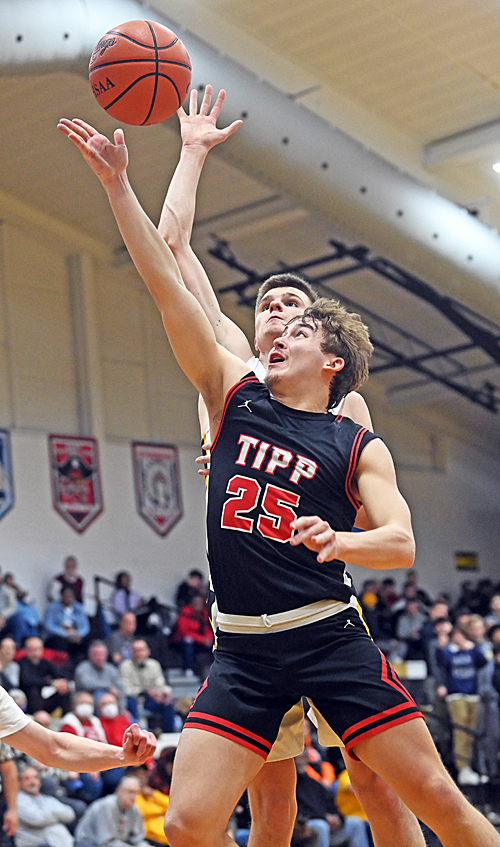 ….and Landon Davis (background) kept this Caldwell shot from getting to the rim.

But on the inbounds play Tipp turned the ball over, Sidney grabbed it, and with 30 seconds on the clock Swiger bulled his way to the baseline, through Cole Coppock, and somehow got off a shot that went in to give Sidney a 43-41 lead.  From that point the game was won – or lost – at the free throw line.  Both teams had their opportunities, and with four seconds remaining in regulation fate willed that Tipp would have the ball for a final possession, trailing 45-42.

They got it to Liam Poronsky, who dribbled to halfcourt, set himself for a heave at the horn, and appeared to travel in doing so.  Nonetheless, he got off a high-arching shot that was perfectly on line…but about an inch short.  It bounced off the front of the rim as the horn sounded.  Final…45-42.

Assessing how they did it later, Willoughby kept falling back on his defense.

“Everyone did a great job of either staying with their man or switching on defense against their screens,”  he said.  “On offense I don’t know how many turnovers we had, but for the most part we did a pretty good job of moving the ball around.  We had twenty-some in our first game down there (in Tipp).  We did a better job tonight.  I’m hoping we kept it under fifteen.”

Sam Reynolds and Jaden Swiger were spectacular in the second half.  Scoring 32 points between them for the game, 25 of those points came in the final two quarters as Tipp could not keep them away from the rim.  Reynolds finished with a game-high 18, Swiger had 14, Julius Spradling had 7, Myles Vordemark had 3, and Mitchell and Landon Davis combined to score 3. 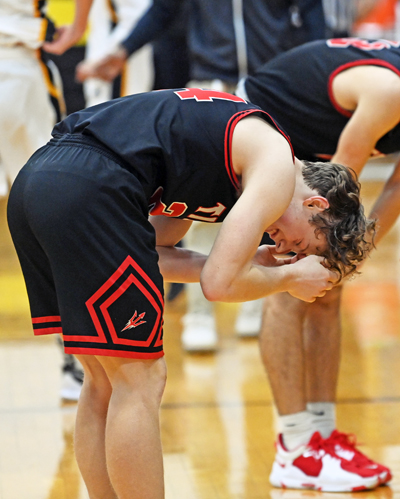 For Tipp, Cole Coppock quietly led them with 13 points, Maddox Sivon had 8, Liam Poronsky scored 7, Griffin Caldwell had 4, and in the biggest surprise (deficit) of the night…Stanley Clyne would finish with just 4 points.  That’s how good Sidney’s defense was, to echo John Willoughby.  It held one of the league’s top scorers (15.6 ppg) to just 4 points.

Sidney improved to 16-4, overall, and now stands 14-2 in the MVL Valley Division.

“Nothing was comfortable, man,”  added Willoughby, speaking of the game’s final moments.  “I’m glad we hit some free throws there at the end, and after he (Poronsky) traveled…after he ‘traveled’…I thought that three-pointer (at the horn) was in.

Spoken like a coach who really liked what he had seen – and one who likes to score – on a night when his defense left him smiling.

A night when he beat Tipp…and the odds. 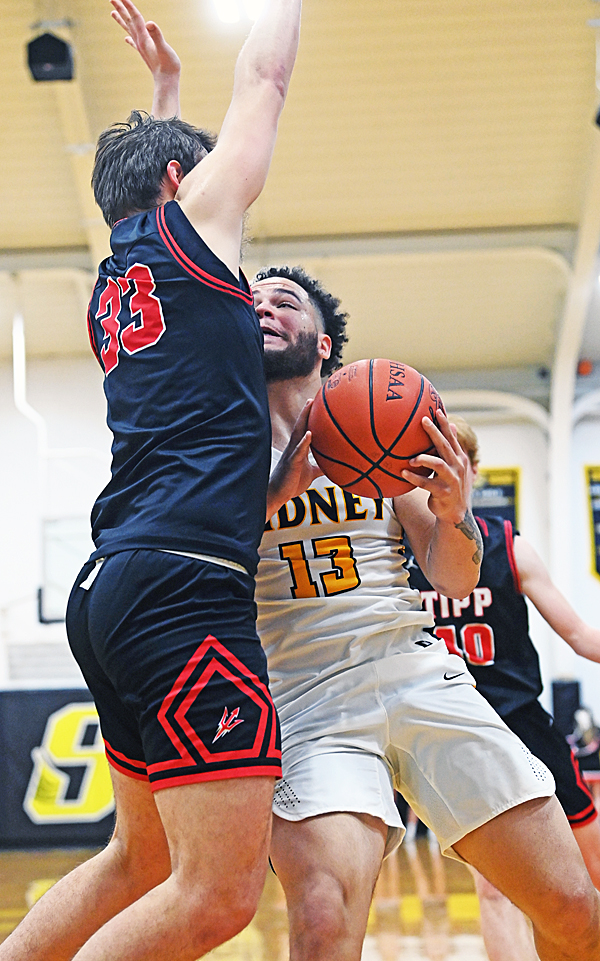 Well-defended, somehow Sidney's Jaden Swiger got through Tipp's Cole Coppock with the go-ahead basket with under a minute to play. (Press Pros Feature Photos)