UD’s Flyers left their game in Richmond, Va. with an 82-52 win over Virginia Commonwealth on Wednesday and absorbed a critical 72-61 defeat in St. Louis to the Saint Louis Billikens, who packed in their defense to stop big mean DaRon Holmes II and Toumani Camara, leaving Kobe Elvis to do the bulk of the scoring and he responded with 20 points.

Elvis buried the three-pointer to give the University of Dayton an optimistic 3-0 lead.

It was an optical delusion.

Saint Louis went on a 9-0 sprint to take a 9-3 lead and the Billikens never glanced backwards.

The Billikens barged to a 72-61 victory and snatched second place away from UD in the Atlantic 10 conference. UD fell to 7-3 in A-10 play, losing for only the second time in nine games. Saint Louis won its fifth straight and is 7-2 in the A-10.

The Flyers had beaten Saint Louis five straight times and won 14 of the last 17 meetings, but the Billikens extracted about five pound of flesh in this one.

Clearly, the Flyers left their game in Richmond, Va., where they beat Virginia Commonwealth Wednesday, 82-52.

Saint Louis stacked its defense near the basket like a pack of hockey goalies and took big men DaVon Holmes II and Toumani Camara completely out of the game.

Holmes was held to five shots and one basket for four points and Camara was held to three baskets and six points. 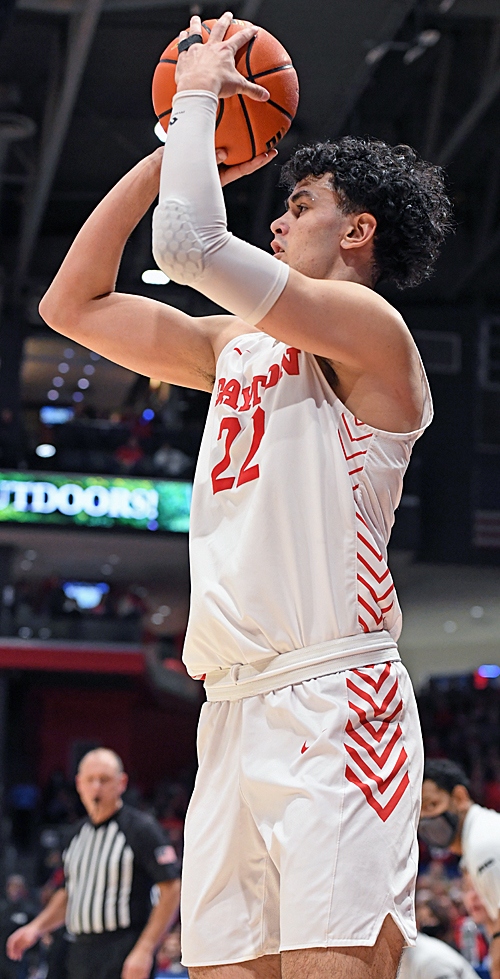 Other than Elvis, no other Flyer could pick up the slack with outside shooting. Elvis scored 20.

After Elvis hit the opening three, the Flyer went six minutes without a basket. In the first 13 minutes, they were 3 for 15 and fell 10 points behind, 23-13.

UD scrambled back to within six points three times in the second half, but each time that happened the Billikens had a loud answer.

The last time came midway through the second half after Elvis scored nine straight points to cut the Saint Louis margin to 50-44.

After Saint Louis hit a couple of free throws, there was a wild scrum with bodies all over the floor. The Billikens’ Gibson Jimerson picked up the rolling basketball and knocked down a three and Marten Linssen scored underneath to complete a 7-0 run.

That pushed Saint Louis in front by 13, 57-44, and the Flyers had nothing left but to lick their wounds.

While Elvis was the only Flyer in double figures, Saint Louis had four, led by the 17 Linssen scored off the bench. 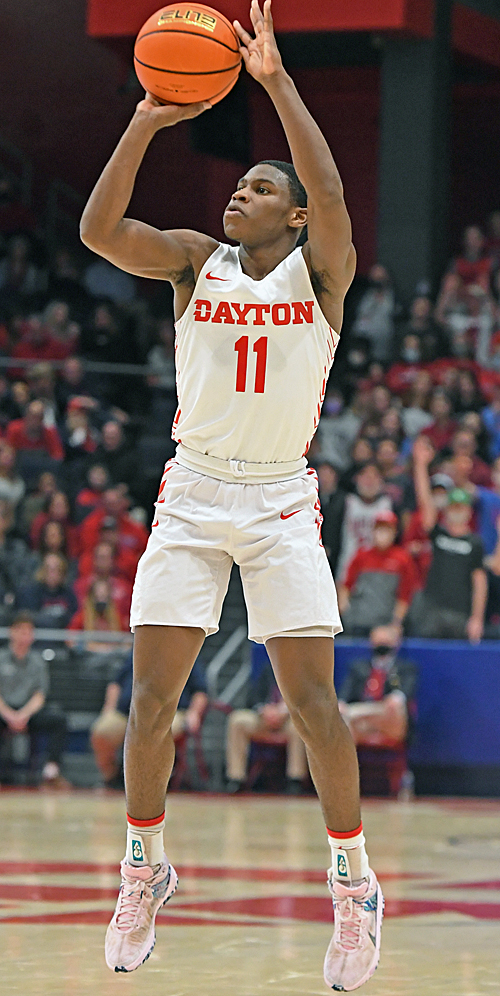 The Flyers hit 22 of 53 shots, 5 of 13 from three and only 12 of 23 from the foul line. They had only nine assists and an uncharacteristically low four from Smith.

Things got ugly late in the game when UD’s Smith fell into the stands under the basket. Former Saint Louis star Jordair Jett, seated under the basket, shoved Smith hard.

Jett was inducted into the Saint Louis Hall of Fame art halftime, but was unceremoniously escorted out of the building after his attack on Smith.

“Saint Louis played well today and I thought they had some great efforts from some of their guys that really stepped up and made some plays for them,” UD coach Anthony Grant told Larry Hansgen on the post-game radio show.

Unfortunately for the Flyers, instead of stepping up to help Elvis most of them were flat-footed for most of the game.

“It was their usual cast of players,” said Grant. Collins spent a large portion of the game on the bench with foul trouble when the Flyers beat Saint Louis, xx-xx, on January 11 in UD Arena. “Jimerson stepped up and gave them a big boost in the second half.

“And then guys like Thatch and Linssen really stepped up,” Grant added.

Yuri Collins, though, was as sweet for the Billikens as a Tom Collins or a Vodka Collins in this one.

“He was really good,” said Grant. “He has done that all year for them and leads the nation in assists.” Collins had 35 points and 13 assists Wednesday when the Billikens beat George Mason in double overtime. And he buried the winning shot at the buzzer at the end of the double overtime. “He is a playmaker who can make play for himself and for others.” 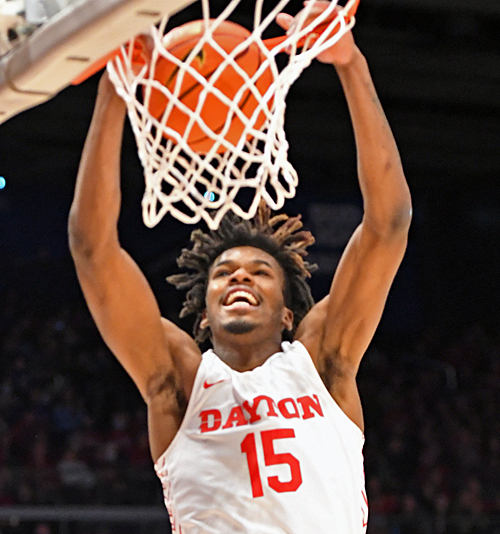 It was suggested that perhaps the Flyers lost their composure a few times during the frenetic pace of the game, but Grant did not buy it.

“I don’t think so,” he said. “We missed free throws, we had opportunities at the rim (not many, though). We didn’t make plays. In a game like this, you have to be able to make plays. We had several opportunities where it was a two-possession game where we could have cut it to one (three six-point deficits in the second half) and built some momentum, but we didn’t take advantage of them.

“They were able to go down and hit a three or make a play to stretch their lead back out,” he added. “Our guys battled, but we just had too many breakdowns. It’s all learning in a hostile environment. Our young guy got a chance to see what will be required as we move forward.”

The Flyers get to see what they learned when they return home Wednesday night to play Duquesne. 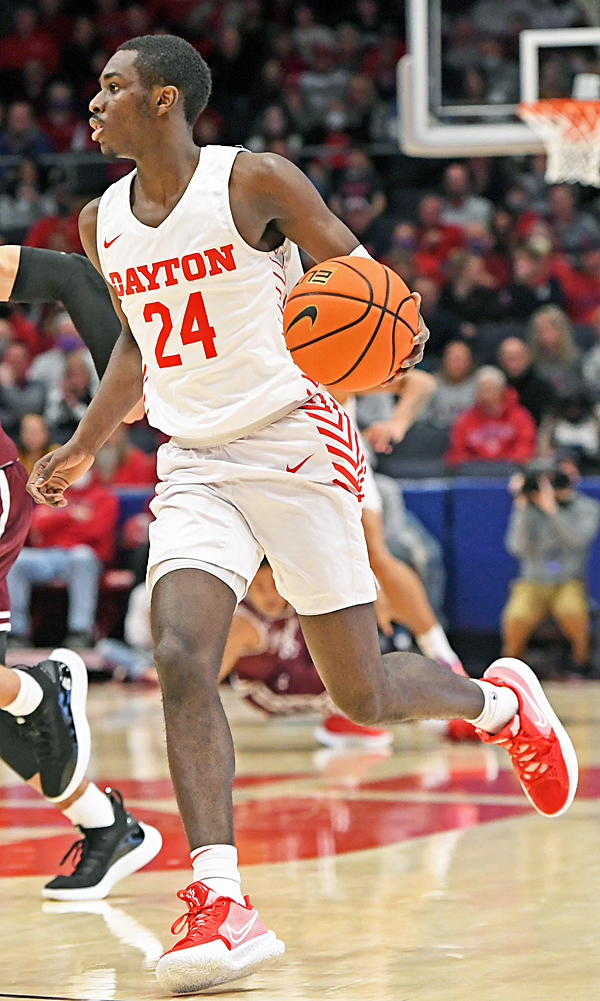