UD’s Flyers were offensively challenged on a night colder inside UD Arena than it was outside where it was close to zero, but they saved the day by applying pressurized defense on Rhode Island to post a 53-51 Atlantic 10 conference victory. Freshman DaRon Holmes II blocked six shots to give him a school record for one season of 56.

DAYTON — lf it had been a beauty contest, they would have stopped it in mid-event because all the contestants were plug ugly.

And that accurately describes the basketball game in UD Arena Friday night that resembled a backyard barbecue that turned into a brawl.

The University of Dayton defeated Rhode Island in spite of themselves, using a defensive antidote to combat everything that ailed them.

The Flyers won despite flailing for 9 1/2 minutes of the second half without a single point. Not one point.

The Flyers won despite their best player, DaRon Holmes II, sitting as a spectator in a not-so-comfy blue chair for eight minutes of the second half with three fouls.

He blocked six shots, erasing Steve McElvene’s school single season record of 55 set during the 2015-16 season. Holmes has 56 and it is only midway through the season. 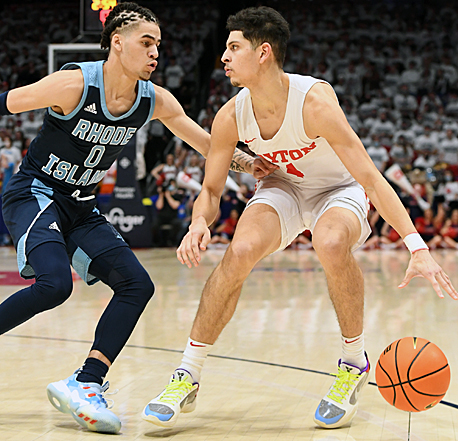 It’s the third time this season he blocked six shots and he said, “I want to block seven in a game, lucky number seven.”

And two slam dunks gives Holmes 47 dunks, the most by a freshman in all of NCAA Division I.

Which does he prefer or enjoy most, a block or a flush?

“I like to block it and then run in transition and get a dunk,” said the man they call Deuce, a man who scored his deuces in a wild, slam-boyant manner.

Holmes sat on the bench from the 15:07 mark of the second half until 7:00 remained. It was during this time that the Flyers went 9 1/2 minutes without scoring.

Fortunately for the Flyers, during those 9 1/2 minutes their 45-36 lead only shrunk to 45-42 because Rhode Island only scored six points during Dayton’s Sahara Desert-like drought.

Then Holmes struck, He ball-faked a defender and cold-cocked the rim with a slam dunk to end the messiness and give the Flyers a 47-42 lead.

“I pump faked on it, got him (his defender) in the air and just went by him and tried to power it to give us some energy,” he said with a grin wider than the base-line.

Then a teammate performed Holmes’s specialty — Toumani Camara blocked a shot, Amzil missed a shot, but Holmes tipped it in for a 49-42 lead with 2:40 to go. 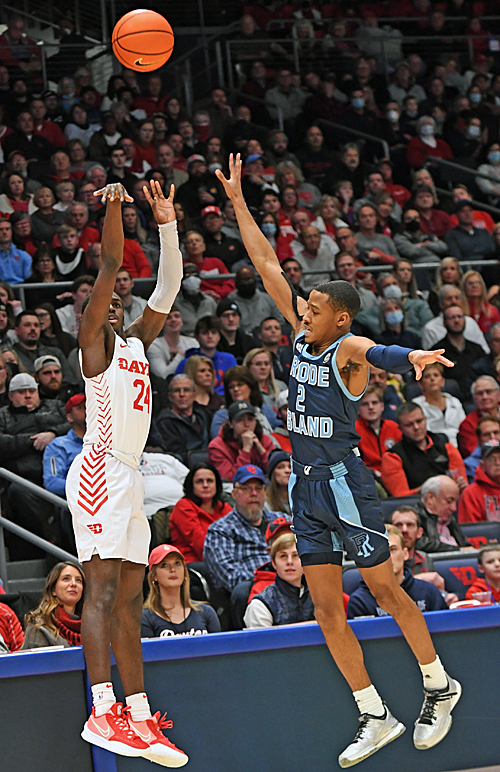 Now it was time for Smith and Amzil to make up for missing every shot they took from the field. Smith made two free throws with 12 seconds left and Amzil made two with 0:04.8 seconds left. That gave the Flyers a four-point lead and an at-the-buzzer Rhode Island basket was harmless.

Camara kept the Flyer breathing in the first half with 14 points and finished with 18.

“Our defensive side. . .,I feel like it has become our identity,” said Camara. “For five straight games we’ve been doing a great job.”

Even though it was a game that even powder, rouge and lipstick couldn’t make it pretty, Flyer coach Anthony Grant was pleased with his team’s stick-to-it demeanor when shots produced a ringing sensation in UD Arena by clanking off the rim.

“That was a hard-fought game tonight,” said Grant after checking his team for brass knuckle bruises. “I told the guys I’m proud of the resiliency the group showed.

“On a tough night offensively, we had a tough time sustaining any type of success or rhythm,” he added. “We had some looks, we just couldn’t get them to fall. I tell the guys all the time about having the toughness and resiliency to find a way to win when things aren’t going well.” 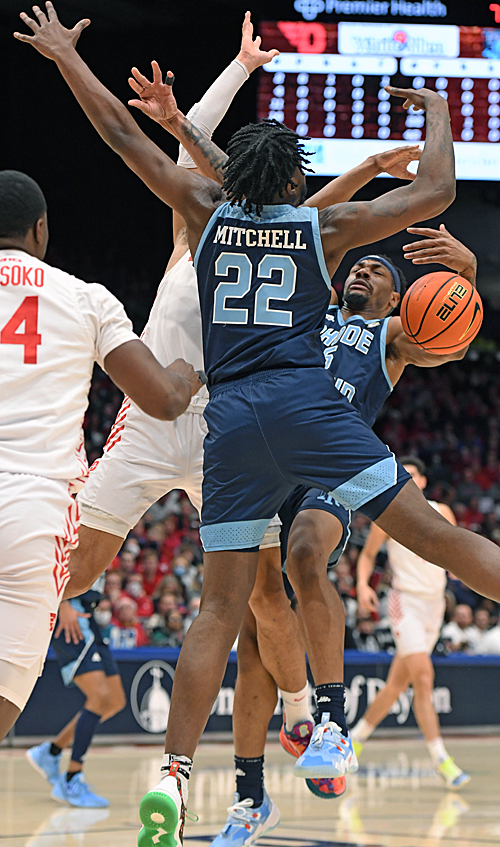 Rhodie Antwan Walker drew a flagrant one foul for this hit on Koby Brea.

Grant not only was on the same page as Camara, he was in the same sentence when talking about Survival By Defense.

“For our defense to be able to carry us tonight, despite the shooting woes, to find a way to win, I’m really proud of this team for doing that,” he said. “It is growth and learning for this young team. And it is great when you can learn through winning.”

What has to be painful is the fact the Flyers are 6-and-2 in the Atlantic 10 and both losses were by one point. They could easily be 8-and-0 and leading the league.

And on Tuesday the Flyers are afforded a chance to retrieve a pound of flesh. They are at Virginia Commonwealth at 9 p.m. for a rematch. VCU was one of UD’s one-point league losses — 53-52 on January 6 in UD Arena.

“They have a pretty good defensive team and those two twins cause havoc. 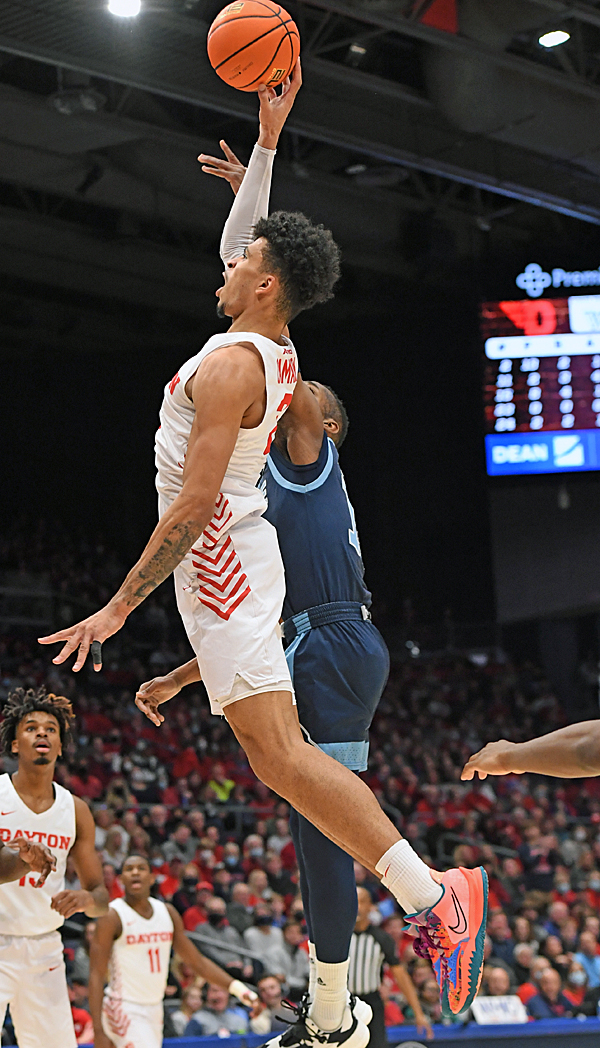 McCoy: UD Flyers Make A Wreck Out Of Virginia Tech