Minster, OH – Coldwater junior Keaton Bruns left little doubt about either his loyalties or some split priorities Saturday.  He showed up to bowl at Minster’s Community Lanes wearing an official Ja’Marr Chase Bengals jersey (in orange, of course).

After 31 years – longer than he’s even lived – Bruns was ready to see his favorite football team FINALLY win a playoff game in the Bengals’ 4:30 matchup with the Las Vegas Raiders.

Why are the Bengals his favorite?  Because, as the average leader of Midwest Athletic Conference boys bowling, he’s arguably better at what he does than the Bengals are at what they do…and he has a soft spot for underdogs.

Sorry to say, that support hasn’t been reciprocal, because for the die-hard ‘who-deys’ 31 years – since 1991 – is a long time to wait for something to cheer about. But that didn’t seem to bother Bruns, who authored an individual 300 game last year, and earlier this year was part of a rare ‘Baker’ 300 game, where each player on the team is responsible to bowl at least two frames…and everyone struck in that one.  No one had EVER seen that happen, either – kinda’ like seeing the Bengals win a playoff game.

Bowlerstore.com, of Versailles, is the presenting sponsor for high school bowling on Press Pros.

But to the business at hand, Coldwater was matched head-to-head Saturday with New Bremen with first place in the league standings on the line…and a head-to-head match between Bruns and New Bremen’s Nick Alig, featured on this page just three weeks ago, the top two bowlers, average-wise, in the MAC.  Bruns entered Saturday’s competition with a 206.6 average in league play, and Alig was second by the narrowest of margins, at 206.3.

“I really don’t think about that kind of thing (the head-to-head stuff),”  said Bruns, prior to his warmups.  “Our team is what I think about, and I’ve got some guys around me who are bowling really good.”

Indeed.  Of the top ten bowlers in the MAC, Coldwater claims four – Bruns, Hayden Beougher, Carter Bertke, and Brandon Hammons – each with at least twelve games bowled, and each with an average of 200 or more. 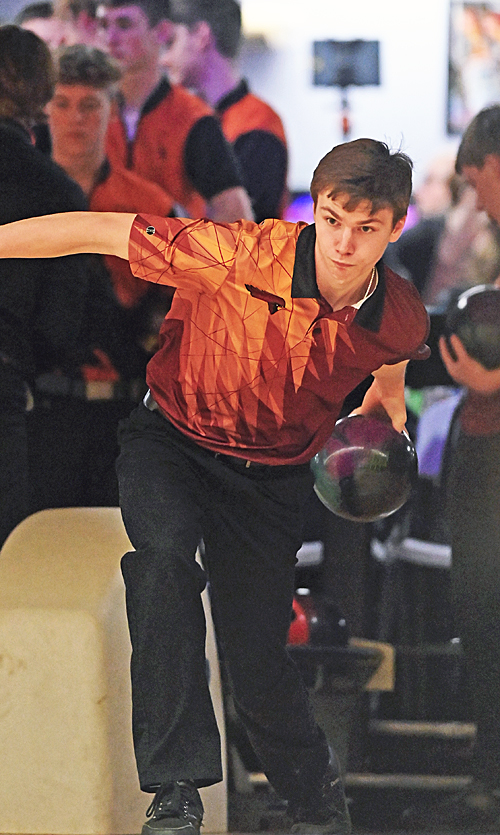 New Bremen’s Nick Alig had the best day, individually, of anyone Saturday, but the Cardinals fell to Coldwater, 3,157 to 2,918.

New Bremen is on their heels, despite Alig being the only player, average-wise, in the league’s top ten in terms of statistical average.

Bruns got plenty of help Saturday after swapping out the Bengals jersey for a Cavaliers’ team shirt.  He bowled well, but far below his expectations.  Individually he had a 227 and a 172, but teammate Hayden Beougher picked him and the team up with a 203, then the high game of the day, 266.  Hammons pitched in a 200, and Bertke had a 225.

Of course, they were done by the time the Bengals played, and to make his day even better Keaton Bruns did, indeed, get to see that 31-year playoff drought come to an end with a 26-19 win over the Raiders.  And Ja’Marr Chase had had his own day, and a pretty good one, at that, with 9 catches for 116 yards.  The jersey, no doubt, will make another appearance next week. 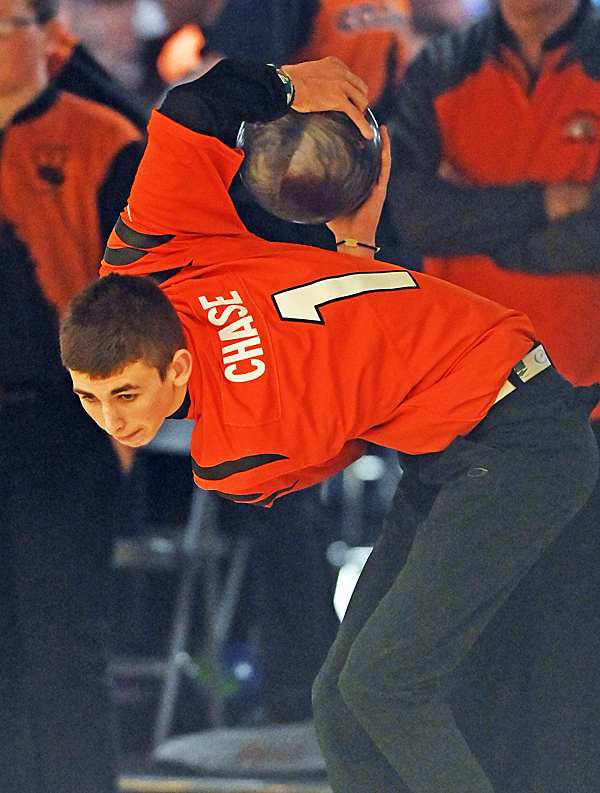 Keaton Bruns showed his true colors (some of them, anyway) by warming up for Saturday's action wearing a Bengals Ja'Marr Chase jersey. (Press Pros Feature Photos)