It took four sets and the anticipation of an entire community.  New Knoxville wins the Division IV volleyball title over St. Henry to take its place among MAC volleyball royalty.

Fairborn, OH – In the end, it seemed only fitting to some, or many.  The New Knoxville Rangers, ranked #2 in the state in the final polls, persevered, found their groove, and finished with a flourish Saturday afternoon to defeat MAC rival St. Henry, 3-1, to capture the 2021 OHSAA Division IV title.

But unofficially, it exonerated the human spirit to withstand tragedy and the heartbreak of the last two weeks, to overcome the unthinkable negative circumstance of coach Meg Lageman losing her husband Ryan in an auto accident, and endure to emerge victorious on the biggest stage of adolescent competition.

St. Henry (22-7) got off to a confident start, scoring in bunches behind good serving and the hitting of Brianna Siefring, to win the first set.

“We were aggressive with our serving at the start of the match,”  said St. Henry coach Tricia Rosenbeck.  “I think we only missed one serve, had eight or so aces, and that’s how the first set went like it did. 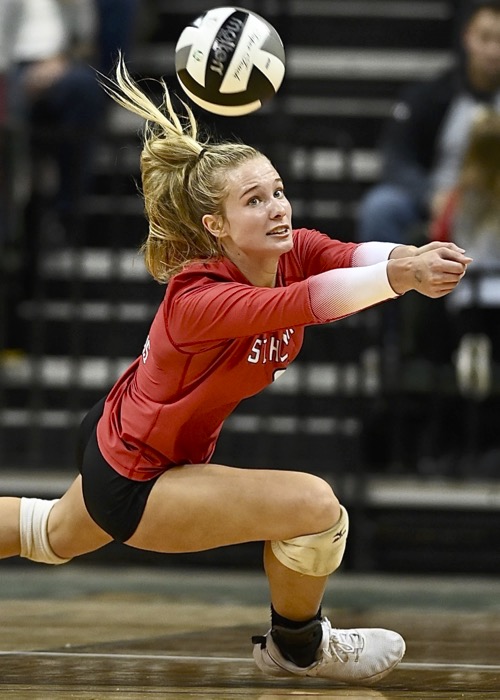 St. Henry’s Brianna Siefring got the Redskins off to a positive start with her hitting and defense.

“But in the second set they kinda’ flipped the script.  They came out and served aggressively, got us out of system, and we started missing a few more serves.”

Missed serves, yes, and a few mishits led to the emergence of New Knoxville’s Carsyn Henschen and her influence on the second set, and ultimately, the match.  Henschen would finish the match with 19 kills, and the more comfortable she became, the more settled in the rest of the New Knoxville team became, as well.

“She’s very hard to stop, especially if they’re passing well,” added Rosenbeck.  “And once she gets going I think the rest of the team feeds off her.”

New Knoxville would come back to benefit from six service errors by St. Henry in the second set, find their own groove, and cruised through the final ten points to a 25-17 win.

The third set was closer at the end (25-22), but St. Henry again dug itself a deep hole by falling behind by as much as seven points (19-12).  And while they rallied behind the hitting of Siefring and teammate Chloe Gels, they could not overcome that big deficit and lost the set to fall behind, 2-1.

By the fourth set it was apparent that Henschen was fully into her game, her element, and that her teammates were playing more confidently as a result. 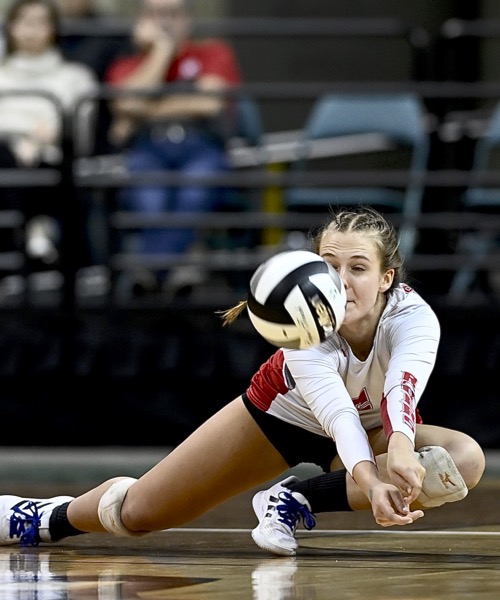 Melisa Waterman’s hustle saved a point for New Knoxville in the second set.

“We all build off each other’s energy,”  Henschen would explain afterwards.  “I wanted to step up and help my teammates feed off my energy, too.  And I think we all came back in the second set and just played like we can.”

St. Henry is a fine volleyball team.  You can’t win 22 times in the MAC without being of quality.

But on this day it was about New Knoxville, about winning the first girls title in school history, and the recognition of Carsyn Henschen being one of the best – if not the best – player in the state of Ohio.

In the fourth set she found what seemed like still another gear.  All over the court, she scored at the net, blocked, dug, and when the Rangers finally hit the 22 point mark…she began to count down the points to a title.  She was, in the best tournament tradition of Paige Jones and her 75 kills in the 2017 tournament, the consummate leader.

She was at the net when the 25th point touched the floor…and at match point the Rangers had joined MAC volleyball royalty, along with St. Henry, New Bremen, Versailles, Marion Local, Parkway, Fort Recovery, and the others.

When it was over the crowd rose as one – and one meaning all of New Knoxville – to both celebrate and pay tribute.  And befitting the tradition of the state’s unquestionable best small-school conference, St. Henry was classy to follow suit.  The sum of those 142 titles, you see, is always greater than the parts.

“I knew it would be a dogfight,”  said Meg Lageman in the post-game press conference.  “It was back and forth, which is the game of volleyball.  I’m proud of the girls.  They played every point like it was their last…because it was.  Today was their last game together, and that’s what we talked about.  They went out there today and earned it.” 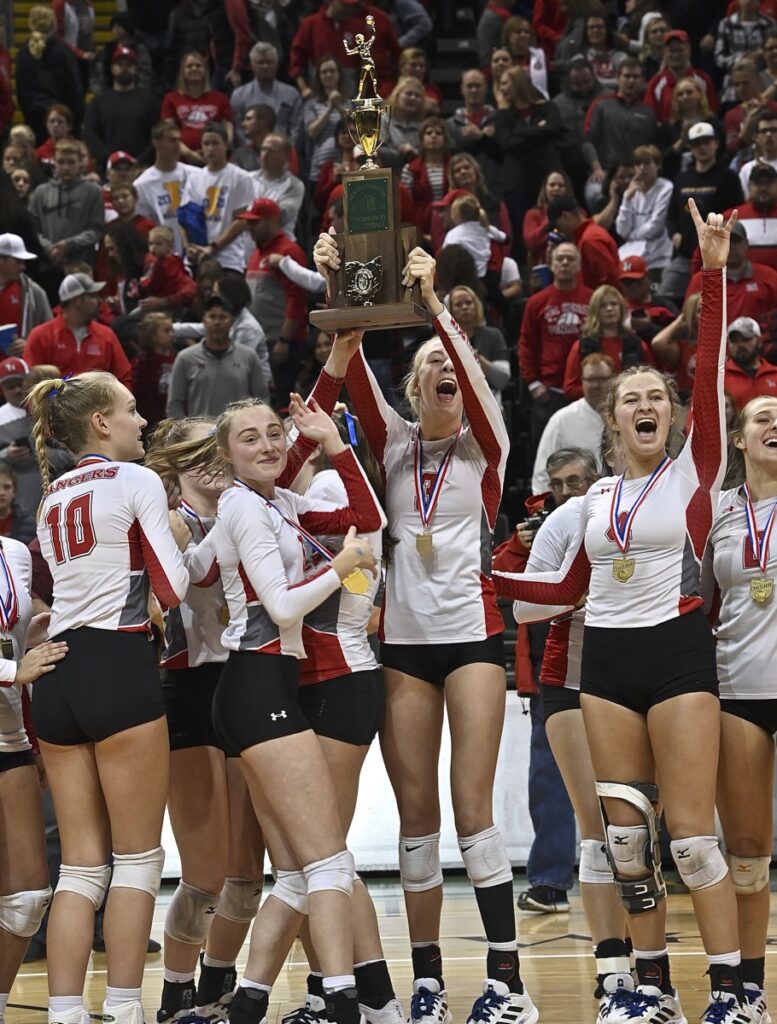 It was the 142nd overall title for the MAC, the 73rd in girls team sports.

This one will be remembered for a long time.  For being the first, for sure.

But also for coming at such incredible expense – of tragedy and the emotional toll on a team and the community, a community that helped keep that team together and on course through its support.

Both sides of the Nutter Center joined in the chant…MAC – MAC – MAC – MAC.  They every one knew that because of what New Knoxville had endured – had accomplished – they could all go home winners in spirit.

They say that titles come hard?

You don’t know the half of it. 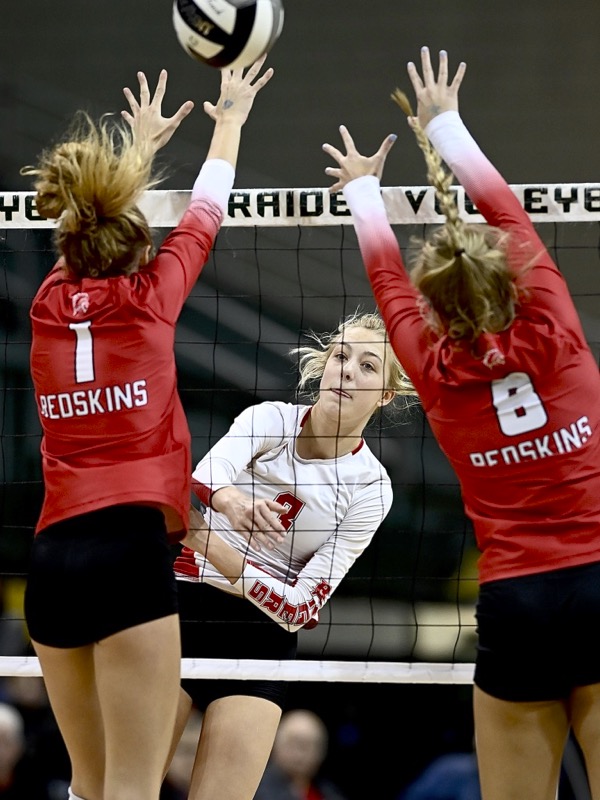