Watching The ‘Series’ With A Better Analyst

It was not only a great story idea, but it scratched an itch that no one else can touch. I watched Game 2 of the World Series Wednesday with San Diego Padres pitcher Craig Stammen…and we talked more about baseball, than the World Series, itself.

I don’t know about you, but I don’t watch the World Series like I used to.

When I was a teenager I watched Bob Gibson, Mickey Mantle, Clemente and Koufax without as much as blinking. I never left the room for fear of missing something.

When I was in my 20s and working as a minor league umpire, I watched the umpires that worked the series – guys that I knew from school and spring training – John McSherry, Frank Pulli, Joe Brinkman, and a young Joe West, a contemporary of mine.

I watched those games back then and literally took notes about plays, situations, and rule interpretations…just in case I ever needed to know.

But watching the Series, and baseball, changed with cable and the proliferation of the Atlanta Braves and the Chicago Cubs on ‘super stations’ TBS and WGN. Suddenly, there was a game on every night, and it wasn’t novel anymore.

And when ESPN came along there was even more baseball, and with it more analysis and all those talking heads. And having played for so long, and with eight years spent behind home plate, I heard things that were contrary to what you observed when you were only mere feet away.

So when I became acquainted with Versailles’ Craig Stammen a few years ago, I put it on my ‘to do’ list to see if we could actually watch a game together sometime – to get a better, different, and more real analysis of the game the way I remembered it.  Regardless of the significance of the sport’s most important event, some things about baseball never change.

And if you’re a pitcher you’re trying to throw strikes to get ahead, and then make the hitter swing at a pitch that may not even be in the strike zone – let the hitter get himself out.  It’s not as technical as they make it sound.

I called Stammen recently and suggested we get together for a World Series game. “I think we can do that,” he said. And Wednesday, with the Braves leading the series 1-0, worked out for both of us. We agreed to meet at my house because Craig and wife Audrey now have three little ones, and he said, “It’ll be a little distracting at my place.” 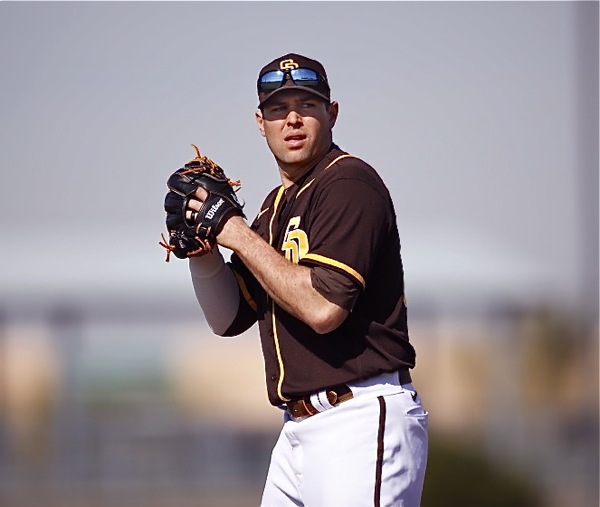 “Your heart would be in your throat.  Part of you wants the ball and to pitch…and part of it is knowing that everyone’s going to see it if you screw up.”

At 37,  Stammen had one of his best years, statistically, of his twelve seasons in the big leagues.  Pitching 88.1 innings, he compiled a 6-3 record with a 3.06 ERA, and struck out nearly a batter per inning.  At 8 o’clock he knocked on the door and we did our own version of Peyton and Eli Manning on Monday Night Football, only with no audience. Actually you, reading this…are the audience.

We dispatched with a lot of the rudimentary interview stuff and got right to better questions and a better perspective from the major leaguer next door, who just three weeks ago was playing against the Braves and the Astros!

SF: Do you think you’ll ever see another complete game thrown by a starting pitcher in the World Series, like Jack Morris did, because of the trend of using the bullpen to open games?

Stammen: Someone once asked me what I thought about the opening pitcher idea – whether I’d be interested in doing it – and I said I would if they let me go five innings. That way you qualify for the win and that’s how I look at being a starting pitcher. If you can’t go five innings you put your team in the hole for the next week. I did it this year, I wish they would have let me go longer because I think I could have, but teams are doing it because they’re winning by using the bullpen. The Padres were like 10-4 this year in games when they did it, and that’s a higher winning percentage than you have with a conventional starting pitcher. But it also takes a toll on your bullpen, as evidenced by our bullpen over the last month of the season and all the innings we pitched.

As for seeing another complete game in the World Series…yes, I think there’ll be another complete game in the future, but there won’t be more than five. It’ll be one of those games where a team has a big lead, the pitcher is cruising, and they leave him in because the game’s not in jeopardy. But there’ll never be a 1-0, or 2-1 game, like Jack Morris did (in 1991). That was one of my first World Series memories.

SF: Does watching a World Series game from home give you butterflies, as if picturing yourself in the moment just three weeks removed from pitching to these same players?

Stammen: No, it gives me a lot of relaxation (laughing), because I know what it would feel like if I were in that game. I can imagine what the pressure of the World Series would be like compared to a regular playoff game, which is what I’ve experienced. Your heart would be in your throat. Part of you wants the ball and to pitch…and part of it is knowing that everyone’s going to see it if you screw up. You’re human, and you’d be fighting those two demons. But there’s nothing more fun than playing playoff baseball. What’s changed over the years is the amount of media coverage there is on every single pitch. The heightened scrutiny on everything you do adds more pressure. You want to look good in front of the family (laughing).

At that point the Braves’ Freddie Freeman came to the plate, one of baseball’s best hitters – one of the game’s toughest outs.

SF: Do you have a book on Freddie Freeman, and how do you try to get him out? 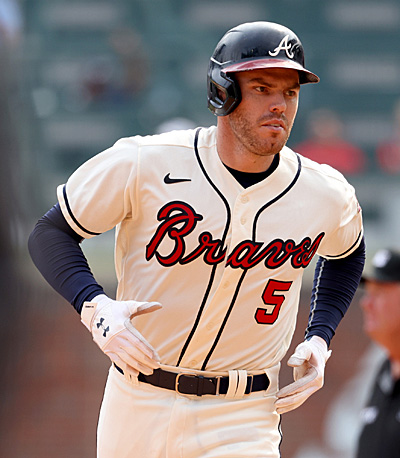 On MVP Freddie Freeman:  “You try to take the slug out of his bat.  If he wants to hit a single to left field, go ahead.  But I won’t let him pull one into the gap in right field or out of the ballpark.”

Stammen: Freddie came up about the same time I came up with the Nationals, and I found that the more you try to strike him out – the more you pitch to him – the more trouble you’re going to get into. The Astros pitcher just stayed down and away with the fastball, didn’t try to pitch inside, and made him swing at a pitch that had the least chance of being hit for a home run. So you try to take the slug out of his bat. If he wants to hit a single to left field, go ahead. But I won’t let him pull one into the gap in right field or out of the ballpark.

Actually, I’ve had good success pitching to Freddie. He’s usually very aggressive against me and I try to make a quality pitch down and away – maybe take a little bit extra off of it so it gets to the bottom of the strike zone – and he hits it to the second baseman. I’ve struck him out before, but that’s only on days when I feel really good about what I’ve got on the mound. Most days you just try to make quality pitches against quality hitters like Freddie.  By the way, he’s a really good guy!

SF: I know from experience that in lower levels of baseball no one wants to swing at the breaking ball for strike one. Is it the same in the major leagues, or are hitters good enough to adjust and hit it, anyway?

Stammen: No, it’s the same, and probably a little more. The younger hitters are usually more free-swinging and they might be hacking at the get-me-over curveball. Whereas the more experienced hitters have a specific pitch and spot they’re looking for and if you don’t throw it they’re not swinging. And nine out of ten times they’re not sitting on the curveball for strike one. For me it’s a pitch that I like to throw to lefthand hitters, just flip it in there and hope they’re not swinging. And most of the time they’re not.

Watching the game, Freddie Freeman takes a called third strike in his first plate appearance. Stammen smiled as he walked back to the dugout.

Stammen: Knock on wood, I’ve had good success against Freddie (laughing). I need to keep it going. I couldn’t believe it when he struck out seven times in a row last week, because I’ve seen him hit pitchers that I thought were unhitable..and he had no problem hitting them. Baseball’s funny that way. Some guys just can’t get hits off a certain pitcher, and some guys can’t make an out against certain guys.

SF: Changing the subject…how many guys on the Padres are fashion conscious about uniforms? 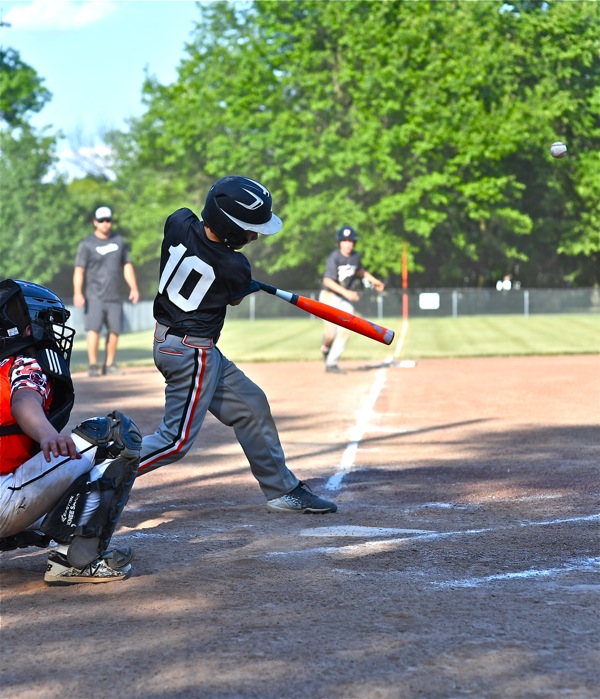 “I can see me in a few years with both my boys playing on the field at North Star,”  says Craig Stammen of his plans after baseball.

Stammen: (laughing). The Latin players are definitely conscious. They’ve got the chains and they wear their jersey a certain way – their pants a certain way. With American players there’s probably two or three on every team that are trend setters. And then you have twenty other guys that have worn the uniform one way since they were in high school, and they’re not going to change.

And then there are the superstitious guys that wearing their pants high for a series and don’t get a hit…so they were them down for the next series.

SF: Do you personally like the Padres uniforms, when they changed the color scheme to brown and gold – old school?

Stammen: When I first heard they were going to brown and gold I wasn’t so sure. But they did a really good job with it and our pinstripe home jersey is pretty neat. But my favorite jersey is the chocolate brown jersey.  I’m not that big a fan of the tan pinstripe that we wear on the road. 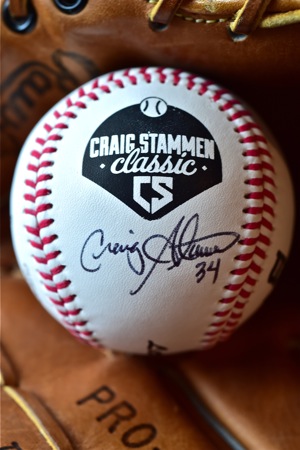 We talked baseball for the next two hours, as if we were high school teammates. The game, itself, lacked drama, the Astros winning it eventually, 7-2.

And at 37, we talked about Stammen’s next move beyond baseball. The family business in North Star beckons, as does the possibilities of coaching.

“I can see me in a few years with both my boys playing on the field in North Star,” he said with a smile. His oldest is not quite four and already knows every Padres player by name and number.

“I’ve thought about coaching high school baseball, or maybe a pitching coach in some organization.”

We could have talked all night about baseball…but we didn’t. He left before the game was over and we agreed to convene again. But no one in Ohio had a better experience Wednesday watching a very forgettable baseball game.  Three weeks ago Craig Stammen was actually ‘in’ the game.

I had the best analyst of all! 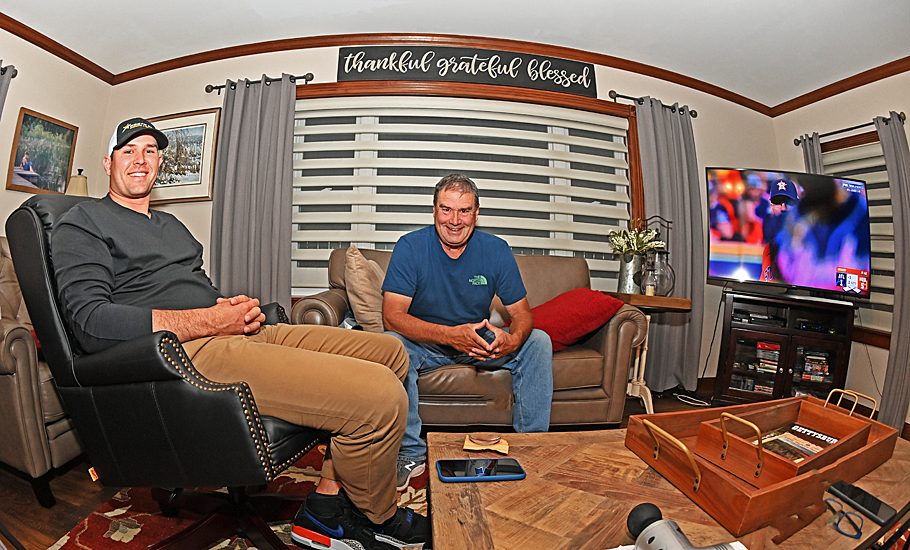 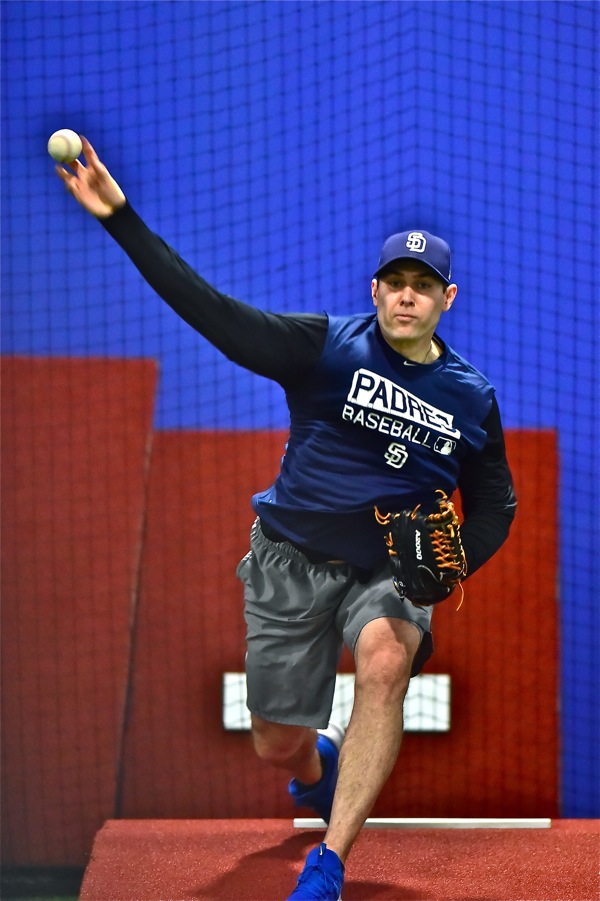