Commentary On Commentary…Things Are Changing Before Our Very Eyes

The most recent ‘Reader Speaks’ page goes a long ways towards proof of another cultural change.  Old standards, even in sports, aren’t that ‘automatic’ anymore.

There were comments made – text, email, and in person – about last week’s ‘Reader Speaks’ page, and those who wrote to question an “obsession with winning” and coverage given to high school teams that win as a habit of expectation.

I won’t repeat them here;  you can read it in the archives if you want.  We get them, along with the other occasional commentary about too much attention dedicated to sports, and the money spent on interscholastic competition as a general rule.

“That money could be better spent, and should benefit a broader group of kids.”   Really?

Sadly, you can’t make this up.  In fact, all you need is to listen to the daily news.  Modern culture hates the conversation about ‘winning’, because some believe it promotes exclusion and divisiveness.  Traditional attitudes are changing, even over school sports, another example of how to mandate equity and equality.

It’s real, and it’s here.  And along with it is that gentle, persuasive tug at the conscience of adults who grew up in an era where expectations, standards, and competitive pride were held in the highest esteem.  Sports back then were seen as a proving ground – how will you defend the honor of the community, and the achievements of those who came and played before you?  A harmless feel-good, we thought.

Now, many like those whose comments we published last week contest the value and relevance of such achievement as too much benefiting too few –  another example of privilege and the uneven playing field.

We published three, but there were more.  And they come from all over – urban, suburban, and even from the country…because ‘country’ is fast becoming the new suburbs with urban sprawl.  The voices get louder with each passing year, and the demands to be heard that either justify or question athletics as an integral part of the educational process.

Several years ago the OHSAA ran a public service announcement at the state tournaments that said (paraphrasing)…that winning was secondary to how you played the game, and showed video clips of athletes denying their own achievement in order to help someone else to just finish the race.  I’m told the idea was initiated by the National Federation of High Schools to promote sportsmanship, and it touched a few hearts…while raising the issue of why are we even having a tournament to determine a state champion if winning is secondary?  Someone must have objected, because you don’t see those PSAs anymore.

But the dissent from those who see winning and achievement as a symbol of privilege did not go away, and is now part of almost every community you find.  And with it, a demand for kinder, gentler attitude about participation, and coverage…and recognition for more than just championship success.

Even in those communities with the most storied examples of athletic legacy people are talking about a different, more inclusive standard be acknowledged – a need for change.  Lincoln did say that all men are created equal, sure enough.  But all men do not run the hundred meter dash in ten seconds.   And to highlight those that do might soon become blasphemy.

Former coach and Notre Dame national champion Lou Holtz, noted for his comic personality, has said, “Everybody [now] wants to talk about rights and privileges.  Twenty five years ago we talked about obligations and responsibilities.”  And because of statements like that Holtz is no longer welcome in many places as a motivational speaker.

There is change, sure enough, and right before our very eyes.   And with that, questions, absurd as they may sound, as to symbols of past achievement that may soon be looked upon not with pride, but scorn.

That state championship trophy on display from 2010?

Someday soon it could become as hard to find as a Civil War statue. 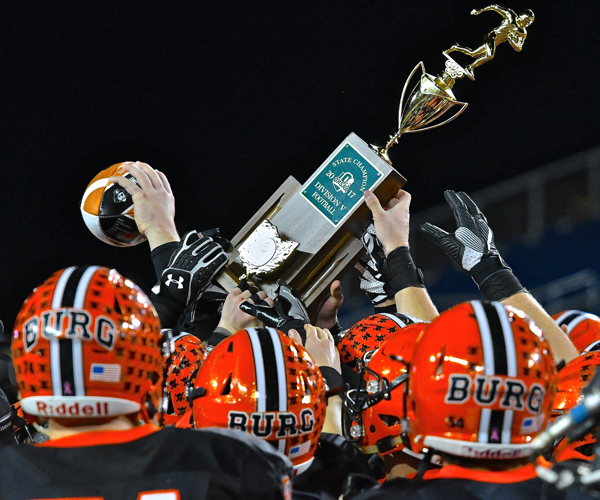