With two games left before the post-season, the OCC’s depth and talent leaps off the page of the Division I and II state rankings as the elite match up for division championships.

The penultimate week of the regular season in the Ohio Capital Conference will provide further clarity on titles in the Capital, Cardinal and Ohio Divisions and showcase five of the state’s Top Ten Division I teams.

Olentangy Berlin’s trip to Marysville matches teams with 3-0 marks in the Cardinal, while New Albany’s trip to Pickerington North features the same perfect records in the Ohio.

Marysville (8-0) leads the quintet of OCC teams that comprise half the Top Ten, with the No. 5 Monarchs just ahead of sixth-ranked Upper Arlington (8-0). New Albany (8-0) is No. 8, with Pickerington Central ninth and Pickerington North No. 10.

Big Walnut (8-0) is No. 4 in the state in Division II and can clinch the Capital at home with a win over Dublin Scioto, which trails the Golden Eagles by just one games in the division.

New Albany (8-0, 3-0) at Pickerington North (7-1, 3-0)…There’s recent history between these two, with North using a win at New Albany last year to win the Ohio and the Eagles avenging that loss in the state playoffs. North’s defense, which carried its overtime win against Pickerington Central earlier in the year, will have its hands full with New Albany’s Wing-T backfield of QB Brock Kidwell and running backs Jadyn Garnes and Christian Manville. Dawaun Green is the headliner for North’s offense, but it’s that plus-13 turnover number on defense that causes opponents headaches. New Albany hangs on in a close one. 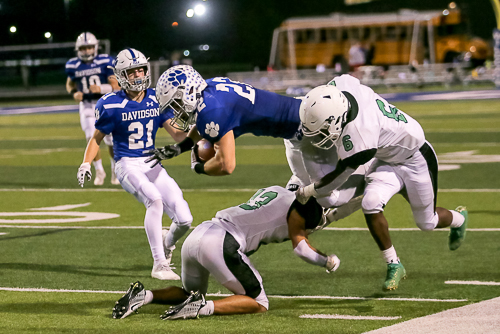 Davidson has a pair of 1,000-yard rushers in Jonny Weir (21) and Leo Nixon and needs a win to stay in contention for a division title.

Olentangy Berlin (7-1, 3-0) at Marysville (7-0, 3-0)…The Cardinal seems Marysville’s to win given these teams’ one common opponent, Dublin Jerome. Berlin needed a frantic comeback to win, 22-21, last week over the Celtics. Just the week before that, Marysville throttled Jerome, 34-0. That suggests the Bears, who’ve won four games by a touchdown or less, aren’t quite up to Marysville’s standard.

Dublin Scioto 6-2, 4-1) at Big Walnut (8-0, 5-0)…The top of the Capital features these two and Westerville South, which Big Walnut waxed, 38-7, in mid-September. South inflicted Scioto’s only division loss the week before that, so given the comparative disparity and what Big Walnut has in one-two punch Nate Severs at running back and Nicky Pentello at receiver, it’s the Golden Eagles who will triumph.

Olentangy Liberty (4-4, 1-2) at Hilliard Davidson (6-2, 2-1)…Davidson has more to play for, given that it can stay within range of Upper Arlington in the Central with a win. Running backs Jonny Weir and Leo Nixon have both surpassed 1,000 yards, which should give Davidson enough offense to handle the Patriots. 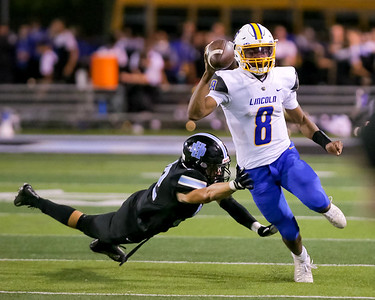 Gahanna Lincoln (4-2, 1-1) at Grove City (1-6, 1-2)…The Lions have won the last five in this series and that success will continue. Maxwell Cummings threw for more than 200 yards and accounted for four touchdowns last week and should have another big night for Lincoln.

Franklin Heights (0-6, 0-4) at Westerville South (5-2, 4-1)…South has won three in a row since Dominic Birtha took over at quarterback and that success will continue against the Falcons.

Olentangy (3-5, 1-2) at Dublin Jerome (5-3, 1-2)…The Celtics have to be steaming over a blown 21-10 lead in their 22-21 loss at Berlin last week on the heels of a blowout loss to Marysville. Jerome won’t salt this one away until the fourth quarter, when running back Preston Everhart is likely to close it out by going over 1,000 yards for the season.

Olentangy Liberty (4-4, 1-2) at Hilliard Davidson (6-2, 2-1)…Davidson has more to play for, given that it can stay within range of Upper Arlington in the Central with a win. Running backs Jonny Weir and Leo Nixon have both surpassed 1,000 yards, which should give Davidson enough offense to handle the Patriots.

Upper Arlington (8-0, 3-0) at Dublin Coffman (3-5, 1-2)...The Bears can punish and pound with running back Carson Gresock when they aren’t throwing deep to receiver Sam Cannon. That’s going to make it tough for Coffman, which has trouble stopping opponents. The Shamrocks can score, but they’ll likely need some turnovers to pull this upset, and UA has lost only two turnovers in its last six games. That brings the Bears one step closer to clinching the Central next week at Hilliard Davidson.

Hilliard Bradley (4-4, 2-1) at Olentangy Orange (0-8, 0-3)…Orange seems too talented to stay winless, but Bradley has won two straight no one expected after its blowout loss at Upper Arlington three weeks ago. Give the shaky nod to the Jaguars in one that, if it goes the other way, won’t be surprising.

Hilliard Darby (5-3, 1-2) at Thomas Worthington (2-5, 0-3)…Darby used three 100-yard rushers to break a three-game losing streak. One of those defeats came in overtime at Marysville, so the Panthers are talented — too talented for Thomas Worthington.

Pickerington Central (7-1, 3-0) at Lancaster (3-5, 2-1)…The Tigers must have watched Remember the Titans last week. They allowed only 30 offensive yards in a shutout of Groveport. The Gales will make Pick Central work for this win, a game it needs to stay abreast of surprising Reynoldsburg, which has won three in a row after starting 0-4 to challenge for the Buckeye Division title. 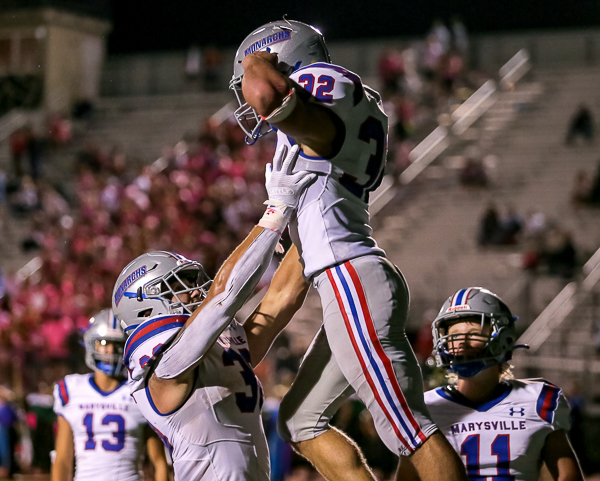 It's time for the cream to rise to -- or remain -- on top as Week 9 in the OCC sets up first-place showdowns in three divisions (PressPros Feature Photos by Brian Bayless).