The Buckeyes defense again gave up yardage in big chunks, but the tailback from Hopewell, Virginia, ran for 277 yards and three touchdowns on 24 carries to erase Archie Griffin’s single-game freshman mark.

Columbus – There were so many glitches on opening day that left angry spectators standing in long lines to get into Ohio Stadium that the athletic department added 27 pedestal ticket scanners, 80 hand held ticket scanners, more police and metal detectors, and had engineers beef up the WiFi connections.

But all that added high-tech gadgetry wasn’t needed with tens of thousands of seats going unoccupied for a game against Tulsa on Saturday.

Simply put, Buckeye Nation was a no-show for the team’s lowest attendance since 1971. The crowd of 76,540 would have been a great house for a spring game, but not for one that counted.

Those opting to eat their tickets and watch on their flat screen televisions avoided 90-degree heat at kickoff, the sunburn that comes with it and, more importantly, a football team that might as well be in a strait jacket as it fights itself.

On-the-hot-seat Buckeyes defensive coordinator Kerry Coombs didn’t have to apply sunscreen in being exiled to the press box. Secondary coach Matt Barnes called the signals from the sideline.

Head coach Ryan Day promised other structural and personnel changes to get the team righted after a loss to Oregon, but Ohio State still sputtered and stumbled on both sides of the ball like a vehicle with a faulty computer system.

In the end, the man saving the Buckeyes from their version of Michigan’s Appalachian State is a teenager.

Tailback TreVeyon Henderson ran for a team freshman record 277 yards on 24 carries, including touchdown runs of 5, 48 and 52 yards, in a 41-20 victory that wasn’t nearly the rout that the score indicates. It was the third-highest rushing in team history.

Archie Griffin’s 239 yards against North Carolina in 1972 had been one of the longest-standing records in the books.

“There’s still a lot of things to work on on both sides of the ball,’’ Day said. “It’s a long journey, but we’re headed in the right direction.’’ 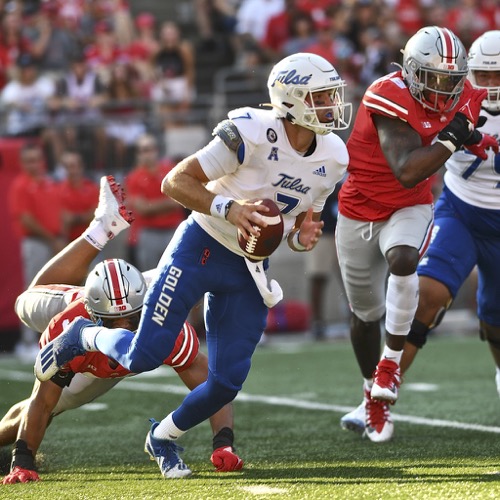 He was slippery…the Buckeyes struggled to get pressure on Tulsa quarterback Davis Brin.

How did he feel?

Day admitted for the first time that a lot of the team’s woes are growing pains.

“We’ve got a lot of young guys in there playing early,’’ he said.

For the longest time, the Golden Hurricane (0-3) looked like it had the right stuff behind quarterback Davis Brin to lead a non-Power 5 team to a victory over the Buckeyes for the first time since Air Force in the 1990 Liberty Bowl.

Brin completed 31 of 54 passes for 428 yards and two touchdowns.

Ohio State countered when quarterback CJ Stroud finished a seven-play, 65-yard drive with a 12-yard touchdown pass to Garrett Wilson on a crossing pattern in the end zone.

But the game wasn’t sealed until defensive back Cameron Martinez put on his best Jim Thorpe moves in bobbing and weaving 61 yards for a touchdown on an interception with 1:50 left to play.

“My name was called and I had a blast,’’ Martinez said of his first extensive playing time in college.

The popular buzz phrase these days is that there is a lot to unpack, and this game had a storage unit full.

Then left guard Thayer Munford went down with an apparent right leg injury in the first quarter and did not return. 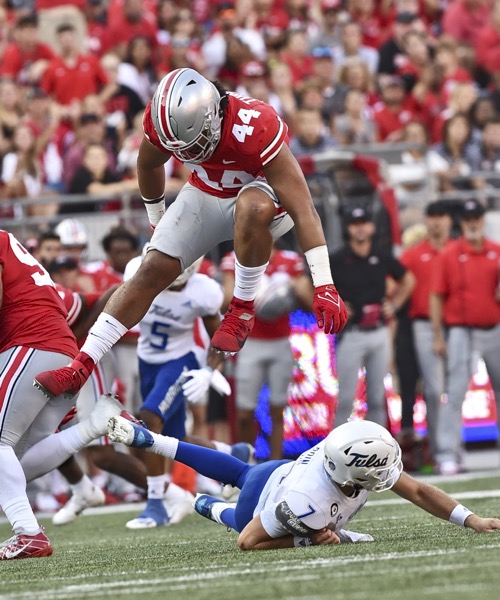 Penalties – there were eight for 81 yards – killed many drives. On one drive alone in the third quarter, Henderson had a facemask penalty, center Luke Wypler an illegal snap and left guard Matthew Jones a false start.

The possession ended with Stroud losing a fumble.

A 47-yard catch to the Tulsa 20-yard-line by Chris Olave in the fourth quarter was nullified by a facemask penalty on right guard Paris Johnson.

“We’ve got to stop the penalties,’’ Day said.

In the end, Henderson proved to be the difference for Ohio State. He looks as explosive as Ezekiel Elliott and faster than JK Dobbins, and both are in the NFL.

Archie Griffin texted Tim May of the web site Lettermen Row saying that Henderson was going to be a special player.

Henderson, who has watched video of Griffin, wasn’t basking in the glory. He did say the record is one of the goals he set in preseason.

Left tackle Nicholas Petit-Frere said the players were talking about what Henderson was doing on the sideline. 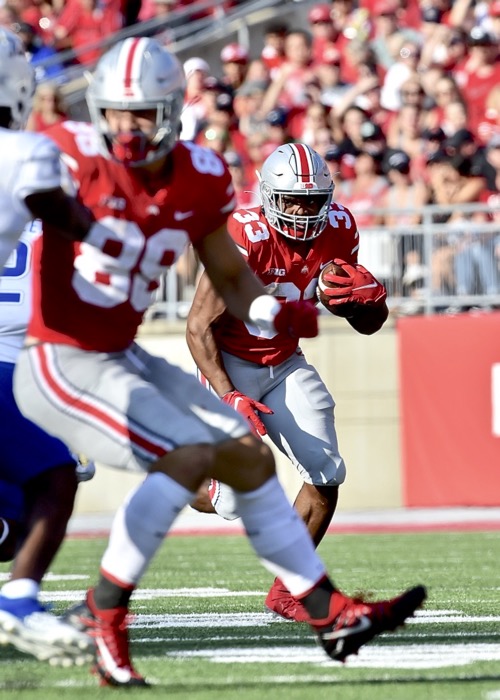 He broke no records, but Master Teague’s 64 yards was a valued addition to the Buckeyes’ rushing attack.

Coaches told Henderson just before game time that he would start ahead of Miyan Williams.

“He’s probably one of the best players that we have here,’’ Petit-Frere said of Henderson.

Henderson provided the team’s first explosive play when he ran 48 yards for a score to make it 20-6 with 12:12 left in the third quarter.

“When he gets to the second level, he gives us the opportunity to hit home runs,’’ Day said of Henderson.

Otherwise, the offense was so helter-skelter and so out of rhythm that Olave did not catch a single pass.

Stroud said the Hurricane “did some weird things’’ playing a 3-3-5 defense and sometimes dropping as many as eight players into pass coverage. He was 15-for-25 for 185 yards.

“It was hard to get a rhythm going,’’ he said. “If you get greedy, you will turn the ball over.’’

Even though Stroud has started three college games, unbelievably there has been criticism. He has remained calm and patient in making decisions.

“I’m only 19 and a redshirt freshman,’’ he said. “I’m still learning. Every time I go out there I’m giving it my blood, sweat and tears. I don’t worry about the negativity. I know I’m a great player.’’ 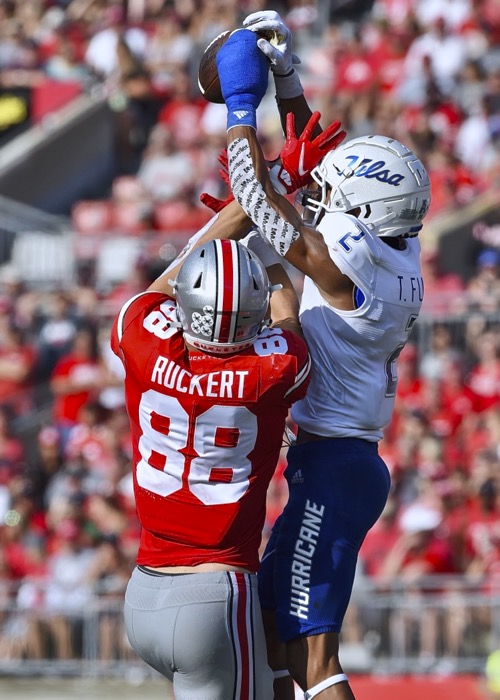 Handicapped play of the day…Tulsa’s Travon Fuller intercepts a pass intended for OSU’s Jeremy Rucker in the first half while playing with a broken hand.

Asked about playing with a sore right throwing shoulder, Stroud downplayed the injury saying no player is ever 100 percent.

The defense did come up with two turnovers and tackle Cormontae Hamilton had a sack for a 17-yard loss to snuff a drive.

But Tulsa totaled 501 yards in offense and had the ball for 31 minutes, 34 seconds.

It’s likely that Barnes will continue to call the defensive signals.

“That’s the way I see if moving forward,’’ Day said. “We took a hard look at it and had a lot of hard conversations about it.’’

Defensive back Ronnie Hickman said the players weren’t shaken by such a big move during the season.

Coombs is loved by his charges and an inspirational personality.

“The coaches did a good job of communicating through the headsets,’’ Hickman said. “I wouldn’t say it was a big change.’’ 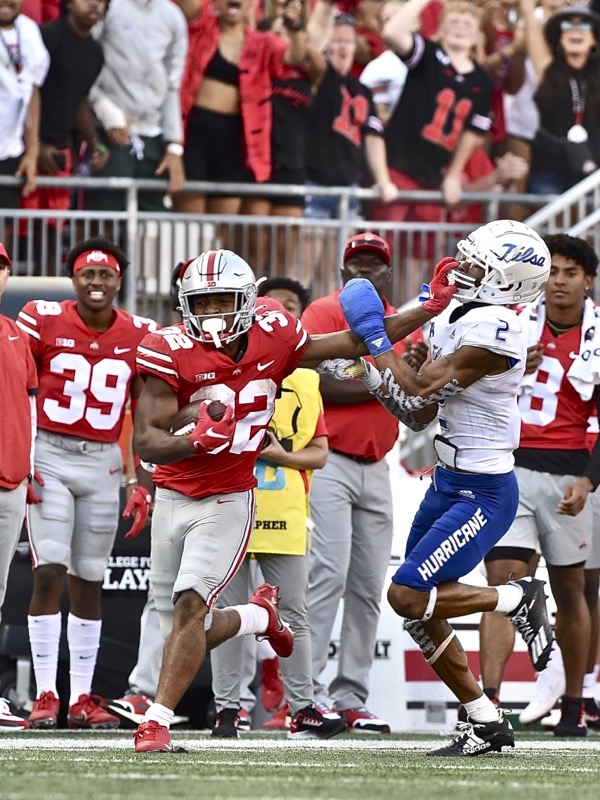 He would have had 40 more...but this long run by TreVeyon Henderson in the second half was called back for a facemask penalty. (Press Pros Feature Photos by Sonny Fulks)