The latest from those who read, have read, and whether they like, or not, they’re reading…on state tournament(s) coverage, OHSAA tournament venues, youth baseball, and DeWine.  Thanks for letting us know.

Short and sweet, if you write about sports, express opinions, include or exclude, you’re going please a few, and tick off a few.  But as one reader/writer chose to express…there’s a reason why there’s always more bridesmaids than brides.  So it goes with summertime ‘Reader Speaks’ columns.

On our coverage of the recent softball and baseball state tournaments….

“Enjoyed your coverage of the state softball tournament, which I might say was long overdue.  Why did it take so long, Press Pros?”  …  Dana Elcessor

(Ed. Note:  World peace is long overdue, too, Dana.  Staffing is one issue, and local teams participating.  Maybe you can explain the other thing.  I’d be interested.)

“You guys certainly pick and choose when it comes to what you either like, or want to cover.  Not sure I understand that.  Seems after all this time you could do better.”  … Jason (via Twitter)

(Ed. Note:  The high road answer, Jason, is found in Matthew 22:14 [many are called, and few are chosen].  But the reality is support, readership, and the simple business decision about where to best spend your resources.  We do look around at the events we cover, though, and we notice A LOT of other media entities aren’t there, either.  I think for the same reasons.)

“Press Pros, your coverage of the baseball title games was the best, something on all four divisions and not just the local teams.  Great stories and superb pics.  Well done.  Enjoyed it.  Committed reader.”  … Tim Hathaway

“Thank you for what you guys do, and do so well.  Former Buckeye living in North Carolina, and enjoyed your coverage of both softball and baseball.  It’s nice to have a resource like Press Pros.”   … Larry Hesson (Hamilton County)

On our June 13 column about the OHSAA making a good choice in choosing state tournament venues outside of Columbus.  Apparently there were those who disagreed.

“If it’s a money thing I understand.  If it’s a convenience thing I would remind that no one likes to be inconvenienced.  Makes you wonder how many people will stay away for that reason.”  … James Walker 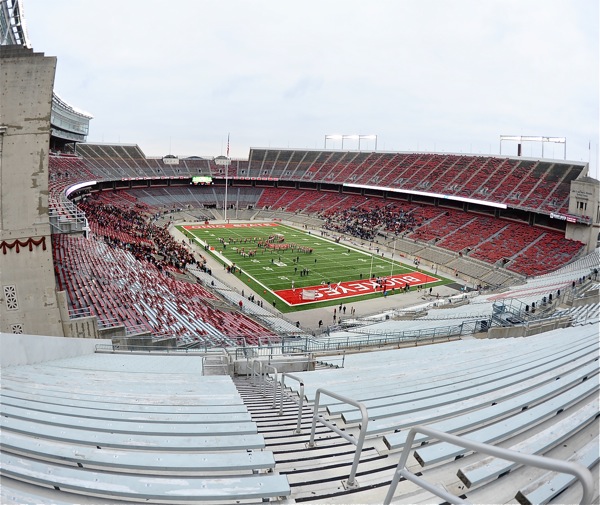 “Not in my book it’s a good decision.  Shame on Columbus (OHSAA) for turning its back on athletes and fans.”  … Sheila Walkup Turner (via Facebook)

“It doesn’t make a difference where they have it if it’s not priced right and a better quality product.  A watered down football tournament isn’t that appealing.”  … Jack Riess

On our recent coverage of amateur baseball events like the state tournament, we received this encouraging missive from an old friend….

“Obviously you support baseball, but I question if you can be that public with your obvious slight of other sports, excluding athletes that work just as hard to play tennis, for instance.  But we get it…you like baseball so those are the kids you choose to favor with Press Pros Magazine.”  … Syl

(Ed. Note:  You failed to mention if you’re writing from Far Hills Avenue or Boca Raton.  Or if you’re referring to tennis at Doral Country Club or Marion Local.  I would venture to say that for the kind of tennis you speak of, it doesn’t lack for either money or support.  If we were close to Wimbledon we’d be there.  But as it is…we’re close to Fort Loramie.)

“Speaking from personal experience I would have loved to have had the kind of coverage you guys give high school and summer baseball when I was in school.  Of course there was no internet, and we barely had black and white pictures.  Thank you for encouraging boys to be boys while they can.”  … Randy Grosenover

Our not-so-veiled references to decisions made by the governor of Ohio in the past calendar year relative to high school sports and the coronavirus moved one person to share this opinion. 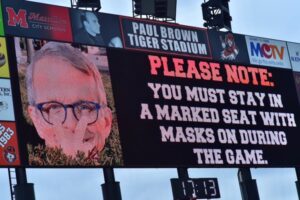 And…everyone could have done without this. Careful you don’t poke your eye out, Governor.

“Is it fair for you and Hooley to bash the governor from the safety of a basement website when he obviously has more to consider than whether they play football and basketball in Waverly.  Please choose to see the big picture.”  … Gregory Vincent

(Ed. Note: Fair has nothing do with it.  And in the age of social media there is no safety.  Besides, it’s not a basement website.  It’s an upstairs bedroom website.  But you said fair, and a lot of people question if it’s fair when he dances from one foot to the other with each succeeding presser, pandering fear.  It’s good politics to say people have the choice of how they run their schools, but do you think it fair to threaten fall sports by saying if you want a guarantee of playing you’d better get vaccinated – claiming adherence to science on one hand, while thumbing their nose at the original science of natural immunities. Is it fair to question why people don’t trust someone telling them how they can live what’s left of their life, which isn’t guaranteed even in the healthiest of times?  And seriously, who doesn’t believe the two-party pandemic isn’t now worse than Covid?)

What Game Will You See Friday (Or Thursday)…?