Father’s Day: What My Dad – Your Dad – Taught Us

Mine has been gone for a decade, and the older I get the more I think about what made him tick then…and makes me tick now!  Remember our dads on Father’s Day.

I can’t help but think of my dad this weekend – wonder what he would have to say if he were around and could see what has become of the world in the past decade.

He’s been gone now since May of 2011, and opinionated then…I can only imagine now, him shaking his head while he set forth the ten commandments of pragmatism as a guiding light.  He always did, and I know nothing would have changed.  The funny thing…I’ll be 70 next winter, just about the time I remember thinking my dad was getting old.  I appreciate the ironies.

Here would be some of his precepts:

Don’t spend more than you have – starting with government.  Manage your money wisely.  Lord, how he shook his head back then when the federal deficit was just billions.  Good that he’s gone now.

Pay your own bills…and don’t be a burden on the community, the state, and the country.  He’d be spinning, wouldn’t he?  The entire philosophy of the government of the United State is now…we’re going to take care of the people from cradle to grave.  They can’t live without it.

He would have some issues with me, and how I’ve managed my life.  He always did – a creature of his own environment and upbringing.  Learn to do more with less – a little self denial doesn’t hurt – because he was a Depression baby (along with nine others) and old lessons die hard.

He would struggle with the changes in the world that mandate that we accept ‘anything goes’ – that there is no ‘right’ and ‘wrong’ anymore.  If it feels good, or it’s convenient, just do it as an expression of your personality.

He would be dubious of things like the internet, cell phones, and people’s dependence on Facebook and Twitter.  No one would ever have to worry about Dad and distracted driving.  I can imagine him declaring, “how much time people waste staring at a phone.” 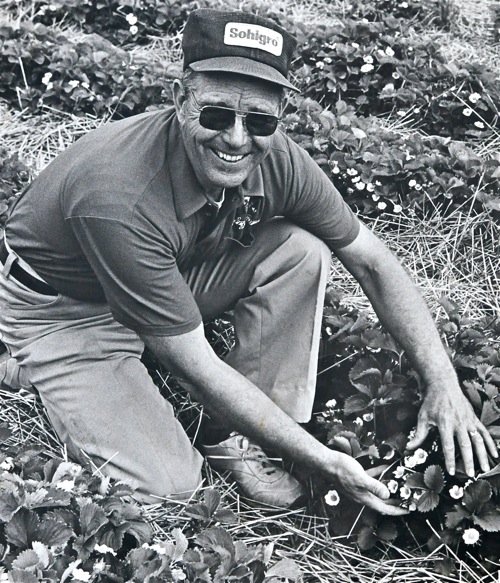 Dad took delight in the simple, sensible pleasures of life – gardening, splitting wood, and pride in being productive.

He would be the epitome of what we now call the ‘silent majority’.  Dad was never that outspoken on things, except when he had you to himself, splitting wood or working in his garden.  But he was an avid reader, studied the issues that affected the path of the country and his own life, and he made his opinion known quietly at the ballot box.

He would demand character from our leaders – of me – because he set such a high standard for himself.  I know this because I was around him through a lot of presidents – remember him talking about Nixon and Watergate, Clinton and Lewinsky, and how disappointed he was with the country’s leadership, believing it had no moral compass.

There were always photos of my dad, usually with his nine siblings, probably talking about work.  He was proud of his family and how all those kids had made their own way – getting something done, and without excuses.  Charlie, Norma, Dad, Jeff, Dan, Claude, Leland, Ross, Joe, and Frank – they were fond of saying that no one outworks a Fulks.  Maybe so, maybe not!

His faith was always front and center.  To his dying breath with an insidious disease that literally choked the life out of him he believed that it was his predestined fate – this was the way it was meant to be – and he was proud to bear it the best he could.

He always tried to pass along to his children, and those he taught in school, the best of what he learned through is own experience.  I asked him many times why he did things they way he did, and he would always say, “Because that’s how we did it when I was your age.”  But he was also fortunate to have my mom, who was the more open to risk of the two, who would often tell him, “just because it happened to you didn’t make it right.” And he would reassess, willing to find a new way, and pursue a better outcome.  I know it frustrated him that I spent four years at college and didn’t follow in his steps as a classroom teacher – that I had wasted that time.  I told him once, “Trust it, I learned a more valuable education. I learned how I fit with the rest of the world.  And I know I don’t have the patience to be a teacher.”  He accepted that.

At almost 70, I understand him better than the frustration I felt for times lost between us when he died.  There comes a time when you realize that what you could have learned sooner was there all along. What’s really frustrating is when you figure it out…that you were too young, and dumb, to care?

Take care of your responsibilities.  Be a good neighbor.  Be dependable and predictable to those who will follow your lead.  It was my dad’s greatest bit of advice when he’d say, “Remember who you are.”

A lot of us have forgotten.

Thank you, Dad.  I keep trying to do better!