Signs Of The Times: Blackledge…The Past Wouldn’t Compute Today

Looking back to when it started, my impression of journalism then, to what it’s become today, couldn’t be more different – right down to the computers we use.  Does anyone remember…Tandy?

Columbus, OH – Based on old black-and-white movies, as a youngster I conjured up this image of the typical sportswriter: Three-piece suit, fedora hat with a press card inserted, all the while chomping on a cigar and pounding on a typewriter in a noisy, smoke-filled press box. Kids, you can Google the word typewriter.

By the time I reached high school – keenly aware that I probably wouldn’t be the next Johnny Bench, Johnny Unitas or John Havlicek — I set my sights on a career as a sportswriter or sportscaster. While attending games, I closely observed the sports editor of the local paper and discovered that he was nothing like the brassy scribes on film. As he meticulously scribbled statistics in his leather-bound notebook, Gary was conspicuous only by his white polyester slacks and flowered shirts. He rarely said boo.

In the 40-plus years I’ve spent covering sports, predominantly at the high school level, a lot has changed. Athletes are bigger, stronger and faster. Unlike the old days when boys were expected to play three sports, many now lean toward year-round specialization, with the hopes of earning scholarship money to compete in college. Girls sports no longer are viewed merely as recreational and social outlets, and their fan support and media coverage reflect that. But Friday nights remain the centerpiece of many communities, urban, suburban, small-town and rural alike. And, oddly enough, marching bands and pep bands still perform the same songs we grew up on in the 1960s, ‘70s and ‘80s. If that isn’t the ultimate indictment of today’s music, I don’t know what is.

Kids used to walk five miles uphill to and from school each day with worn-out shoes in the snow. Or at least that’s what our parents and grandparents told us. (Insert sarcastic laughing emoji). Seriously, though, this was an era without computers, video games, I-phones and big-screen TVs. In fact, counting PBS, we had only four channels. Except for occasional Ohio State and Cincinnati Reds games, weekly national broadcasts and NFL Sundays, opportunities to watch sports on the tube were few are far between. Subsequently, parks, athletic fields and neighborhood streets were always filled with kids of all ages. It was easy to hop on your bicycle and find a pickup game.

The boom in technology has turned this profession upside down, in many cases enhancing the coverage of high school sports, but at the same time inflicting serious damage to a once-proud newspaper industry.

As a budding college journalist, I covered games (often simultaneously) for the school newspaper, campus radio station and the local paper. Yes, it was Polyester Gary who gave me my first opportunity to cover college and high school sports for a daily newspaper.

With video display terminals just in the formative stages, here was the standard operating procedure: All of my stories for the college newspaper would be hammered out on a typewriter (I single-handedly kept the white-out business thriving) and submitted it to an editor for typesetting.

When covering games for the local paper, I had two options. The simplest way was to return to the office and write on one of the VDTs. Covering college road games – sometimes out of state – was a challenge, however. Often, I carpooled with an assistant basketball coach who was unable to travel on the team bus because of his duties as an elementary school teacher. I would drive to the game and he would take the wheel coming home while I wrote my game story on notebook paper under the car’s dome light. Upon our return, I either slid the story through a slot in the newspaper office door, or called Gary early the next morning and dictated it to him.

After graduation, I was hired as sports editor and the only full-time time reporter for a small paper covering five high schools and a small college. Here, I had to learn how to shoot and develop my own photos and those of my part-time help, lay out pages manually and edit the stories. Things got so hectic on football and basketball Friday nights, I often would work until 2:30 or 3 in the morning, snooze for a few hours on a couch in the women’s restroom and then awaken to finish putting the noon edition to bed. 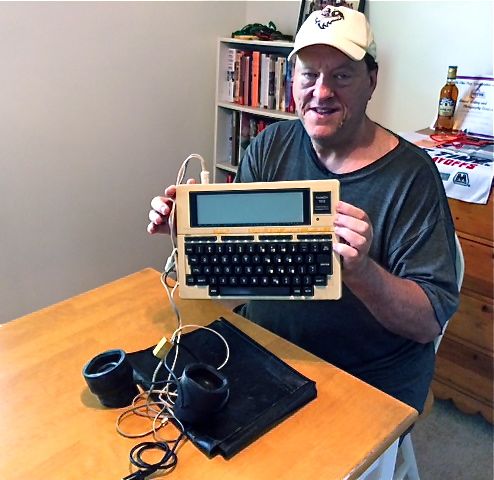 I remained loyal to my handy-dandy Tandy until it became…useless!

Not long after I began work as the chief prep beat writer at the Columbus Dispatch in the mid- to late-1980s, the first portable computers were being developed. Radio Shack sold a Tandy model called TRS-80 commonly used by reporters everywhere. Even as updated laptops were produced, I remained loyal to my Handy Dandy Tandy until it became useless. Talk to any grizzled sportswriter and he or she likely will share stories about the Trash-80, as it was affectionately (or not) referred to.

The Tandy model was basically a small, basic word processor capable of transmitting a story through a land line phone modem directly to the paper’s computer. It featured wire couplers that needed to be clicked into a phone jack. Finding these jacks often required crawling under the desks of high school principals or coaches. If a conventional jack was unavailable, a second option involved using a set of rubber couplers that cupped the mouthpiece of any phone, even a public pay phone. This was always hit and miss as stories frequently garbled and had to be retransmitted multiple times. It also should be noted that most morning newspapers faced late-night deadlines, which made this ordeal more than a bit stressful.

The advent of the Internet made this process of writing and filing stories substantially easier, provided that schools offered reliable access. Just six or seven years ago, a dozen or so of us reporters were covering a state semifinal football game in a remote rural locale only to learn afterward, on deadline of course, that there was no Verizon service. As a group, we hot-footed it to a McDonalds in a neighboring town to file our stories.

More and more, people rely on the Internet as their chief source of news and information, and coupled with shrinking space holes and earlier, more restrictive deadlines, the physical newspaper as we know it is dying. Some dyed-in-the-wool subscribers, unwilling to access news on their phone or computer, rue the day when they no longer can open the morning paper with their cup of coffee and pore over Friday’s night’s action and photos. Gone, too, is the anticipation of scrolling through the Friday night scores on local TV. Fans now are able to locate the scores, and sometimes even details, of their favorite team’s games via Twitter reports on their phone devices. Most coaches and players know the results of their rivals’ games before leaving the locker room.

Advances in technology certainly have provided high school sports more exposure. Many schools and companies stream games on-line for their fans. During a Division I regional final boys basketball final in March, I was one of three media types on press row actually covering the game, but more than two dozen folks with video cameras lined the sidelines. And the footage they shot and shared on a game-winning half-court shot was glorious. Print media members now regularly use their I-phones to shoot action video and postgame interviews for social media.

People occasionally ask how I have changed my approach through the years covering prep sports. In the old days, reporters shortsightedly operated under the mindset of simply interviewing the local or winning coach as the sole source of their stories. Some coaches balked at the idea of allowing access to players, especially following a loss, in hopes to control the narrative. That’s definitely not the case anymore, and it’s a good thing. If possible, I typically try to interview both coaches and at least two players from the winning team. It makes for a much more colorful story and also allows the teenagers an opportunity to develop their communication skills. Most of the athletes seem to enjoy being interviewed.

It is natural to wonder about the impact we make on people through our work. Countless times throughout my career, I’ve been approached by adults who shake my hand and ask if I remember covering them as high school athletes. Any more, I need a name and school to jog my memory since I’m now covering many of their sons and daughters. But as they beam with pride about being highlighted, quoted or photographed in a story I wrote, it occurs to me that appearing in somebody else’s scrapbook means that I’ve played a small role in a happy chapter of that person’s life.