Saturday’s races got a great preliminary boost with Friday’s state tournament action.  Long jumpers and pole vaulters got a lot of attention with some big efforts.

He had placed sixth with a sub-standard effort of 14 feet. The top four places per region automatically qualify to the state with the Ohio High School Athletic Association awarding two additional at-large berths statewide to fill out its 18-man field.

De Francesco went home and jumped on a website of track results, hoping against hope that he might get a reprieve. After hitting the refresh button on his browser a few hundred times, De Francesco got the news he wanted. He would compete at the state as the final qualifier.

“It was kind of a rough night, not knowing whether I was going to qualify until like midnight,” he said. “It was really nerve-wracking, to tell you the truth. But when I found out I was going to get a second chance, I was determined to make the best of it.”

De Francesco, did just that, soaring 16 feet, 6 inches – a foot higher than his previous season best – for a state runner-up finish Friday at Hilliard Darby. Paul Signorelli of Cincinnati Turpin made his third and final attempt at 16-10 to claim the title. Had Signorelli missed, De Francesco would have won a tie-breaker based on fewer misses at the previous height.

“I know it looks strange going from sixth in the region to second in the state, but I had hoped to get on the (awards) podium and make All-Ohio,” De Francesco said. “We finally put it all together in training this week and I had a good feeling coming in. I got on some bigger poles and it really gave me a lot of confidence.” 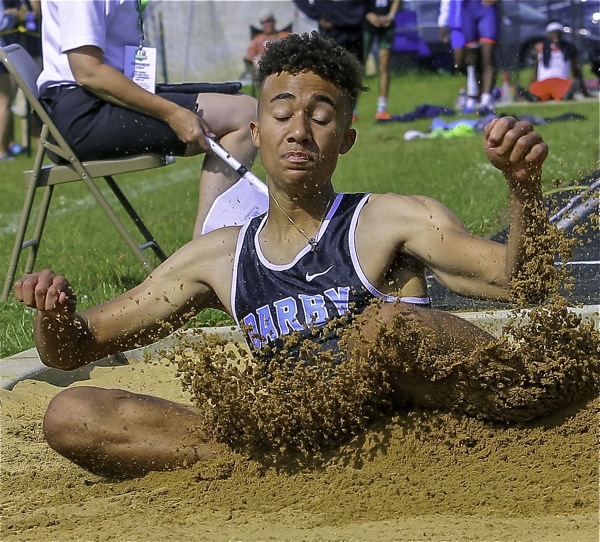 Hilliard Darby’s Alex Smith prepares to stick the landing during the OHSAA State D1 Track and Field long jump competition. Smith claimed second place with a jump of 23′ 7 1/4″ behind Massilon Perry’s Luke Laubacher with a jump of 24′ 3 1/2″.

“This sort of thing happens a lot in the pole vault,” Petersen said, referring to De Francesco’s surge to second. “We all know that Jack has put in the work to achieve this. It was his day.”

Srsic said he landed on his head during the competition and was never the same after that.

Alex Smith of Hilliard Darby took runner-up in the long jump with a leap of 23-7¼. Luke Laubacher of Massillon Perry won the gold (24-3½).

“My (personal record) coming in was 23-8, and I was really shooting for 24 feet today,” Smith said. “Getting that big jump early in the competition took the edge off a little because I figured it would put me in the hunt. I got my school record, so that’s something I can be proud of.”

Also taking home a runner-up medal was Sydnie Smith of Bexley in the girls discus. Her toss of 131-10 set a school record. Smith is a niece of Ohio State and WNBA legend Katie Smith, who herself was an accomplished discus thrower at Logan. Halaya Woodson of Hamilton Township took third (130-9). 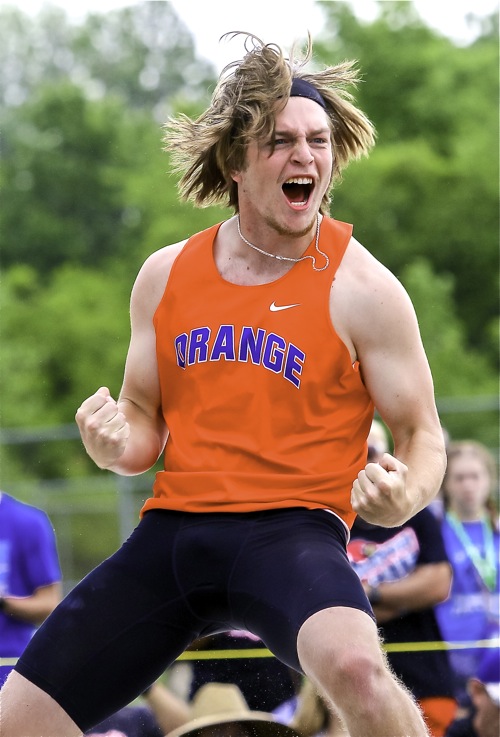 Jonathan Petersen celebrates after clearing a height of 16′ 2″ during the OHSAA Regional Track and Field Finals at Hilliard Darby High School on June 4, 2021.

The only track finals on Friday were the girls and boys 4×800-meter relays.

“It feels amazing to do this well,” Coffman anchor Kylie Feeney said. “I wasn’t 100 percent sure how well we would do because there are so many good teams around the state and they all run faster at state. “I really wanted to catch the girl from Mentor, but her legs were too long and she just pulled away in the final 200 meters.”

Davidson had edged Coffman by 1.78 seconds in the regional race. 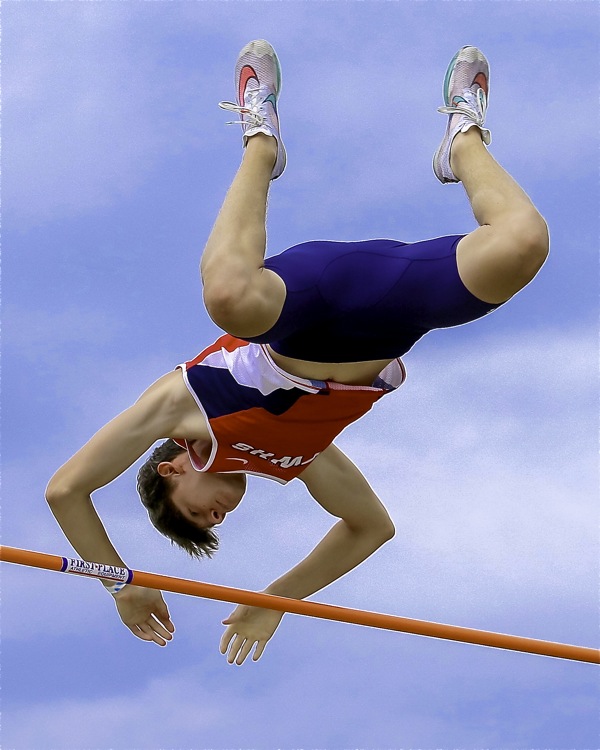 “We just wanted to be in the hunt, and when I got the baton we were right there,” Willis said. “It’s really exciting to be in that position, but there’s a lot of pressure with it, too. We gave it our best and we’re happy with our place.”

Westerville Central junior Justin Braun, who is attempting to become only the third big-school boys athlete in the 113-year history of the meet to sweep the sprints (100, 200, 400), easily qualified to the finals in each event. The last to do it was legendary Chris Nelloms of Dayton Dunbar in 1988. Nelloms still owns state meet records in the 200, 400 and 110 hurdles.

In all, 13 boys and two girls have won the so-called Triple Crown. 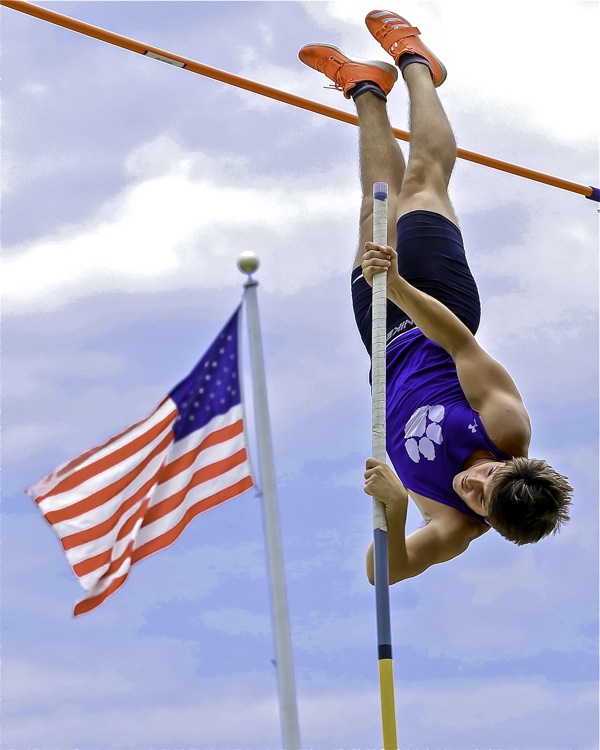 Hilliard Davidson's Jack Defrancesco soars up and over the top to clear 16' 6' to claim second place in the OHSAA D1 Track and Field Finals at Hilliard Darby High School on June 4, 2021. (Press Pros Feature Photos by Brian Bayless)