Lessons From A Veteran’s Service Echo On Memorial Day

The lessons of a father who fought in World War II resonate today in an era where the collective spirit of the Greatest Generation seems to have gone out of style.

I haven’t been able to make the telephone call for awhile, and I still miss it, as I’m sure I always will.

This will be the fourth Memorial Day to pass without the ability to tell my father that I appreciated his service in the U.S. Army during World War II.

He was part of the Greatest Generation, the one that banded together and sacrificed so much to save not just our country, but the world, from Nazi tyranny and their partners in the Axis Powers, Japan and Italy.

Gayler Hooley enlisted immediately after high school and shipped off to Fort McClellan, Ala., on a troop train before taking a ship to Europe and serving in Italy as the Allied troops closed in on VE Day in May of 1945.

He never talked much about what he saw there – only the good stuff about Army buddies and the shenanigans of a farm boy halfway around the world, with a few lessons in Army wisdom that applied to life beyond the service.

“You’re better off volunteering for something every now and then than never volunteering for anything,” he told me once. “There were times I walked a post on guard duty when I’d have rather been on liberty. But because I did that, I never got picked to swab the latrine.”

My uncle, who I’m named after, drowned in a swimming accident while my father was serving as a marksman in the infantry. He got the news from his company commander, a full month after the funeral.

We can’t conceive of such an information delay in this era, but that’s far from the only thing to change so dramatically in the last 75 years.

While we’ve come light years technologically, it feels every day like we’re progressively retreating further from the values that brought all Americans together in my father’s era.

Could we summon the collective will these days to limit our use or consumption of staples like gas, sugar, heating oil, tires, shoes, milk and butter without complaining, all so those resources could be spent on the war effort?

It’s almost unfathomable to envision agreeing on a common enemy to fight, other than the one across the political aisle. And good luck reaching a consensus on a single shared value everyone would deem worth risking their lives to defend.

My dad told me many more stories about what it was like growing up during the Depression than he spent time giving me details about fighting World War II. I’ve come to realize that’s because growing up without very much made him very protective of the freedoms he believed offered him the chance – but not the guarantee – of obtaining a better life. 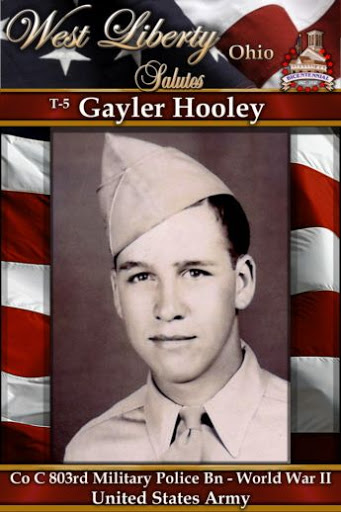 He always viewed living in the United States as a privilege, which is probably why he saw the time he spent serving in the military the exact same way.

Back then, privilege was where duty met honor. Today, privilege carries a much different stigma, but then a lot of things that were esteemed then aren’t any more.

That’s why I’m often genuinely glad he died in 2017, too preoccupied with his love for his bride of 67 years, his daily Bible reading, and his Cincinnati Reds or Ohio State Buckeyes to pay much attention to our rancorous political climate.

He never lost his love for America, proudly calling cadence for his American Legion post as it marched with Old Glory at the front of many a Memorial Day parade in my hometown.

Late in his life, he had the honor of being the grand marshal on a scorching hot day that I wasn’t sure his weak heart would survive. It did, until the call came on a fall evening as I drove my youngest daughter home from soccer practice.

“This can’t be good,” I said to her, noting that calls from my sister-in-law at that hour could only mean bad news.

Indeed, I was right. An aortic aneurysm left little doubt of what lay ahead within the next 12 hours, most of which I spent with him in the ER and Intensive Care as the medication to mitigate his intense pain took over.

We had one last night to talk, and the blessing of our relationship was we didn’t really need it. There was nothing left unsaid between us that loomed as a priority to resolve.

He knew how much I appreciated all those calls the years I spent Monday-Friday living apart from my family while working in Cleveland.

He knew how much strength I drew from the scriptures he shared with me, and the times he’d say, “I prayed for you three times today.”

He knew how much I cherished watching him rock my three girls for endless hours in La-Z-Boy the year of their birth.

And he knew the lessons he modeled by cherishing my mom, working relentlessly hard, always telling the truth and pushing through adversity without ever complaining would resonate with me forever.

This Memorial Day is indeed a memorable day because it compels me to think about the man who gave me much more than last name to carry with me.

I miss him, of course, but he’ll always be with me.

I hope that same proves true of the country he fought to preserve.

Bruce Hooley is a former sports editor of the Troy Daily News. He hosts the We Tackle Life podcast on GooglePlay and iTunes and posts faith-oriented content on the Bruce Hooley YouTube channel.