The Tigers’ first district championship game appearance since 2009 didn’t end like the Tigers hoped. But Versailles put down the groundwork for another potential run following a 5-2 loss to Georgetown in extra innings on Thursday.

Centerville, OH – One by one, after getting a high school softball district runner-up medal draped around their neck, the Versailles Tigers slowly made the walk down the first-base line.

The Tigers’ players mingled around first base on the game-worn Centerville High School softball field. They shared a few laughs and smiles cheering each other up. They said good-bye to the six seniors. The hugs were a little tighter. The tears flowed a little freer.

This wasn’t the way the Versailles Tigers wanted the season to end, of course. But in the aftermath of Thursday’s 5-2, eight-inning loss to the Georgetown G-Men, the Tigers still appreciated the moment.

“Hey, we went farther than the baseball boys did,” a Tigers’ player said playfully in the team’s final post-game huddle of the season.

“Was that necessary? Was that really necessary?” answered one of those baseball players who was within earshot, continuing the friendly banter.

Make no mistake … this one stung. The Tigers were making their first Division III district championship appearance since 2009. One bad inning did them in. And it came in the top of the eighth. 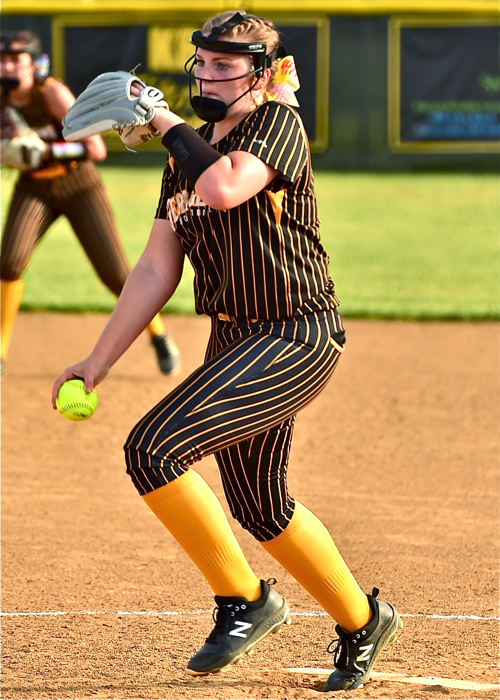 Versailles (16-3-1) and Georgetown (19-7) entered the inning tied 2-2. The G-Men, sending the heart of their lineup to bat, put the first four batters on base with a double, intentional walk and consecutive singles. The first single barely eluded the glove of diving shortstop Colleen Hiestand for a 3-2 lead. The second single – a hard-to-handle, low-sinking liner to Hiestand – provided the 4-2 lead.

The fifth and final run came on a steal at home. Catcher Abby Stammen tried to end the inning with a quick pick-off attempt at first base. G-Men runner Shelby Bradley alertly sprinted home and scored without a throw.

“Chemistry. Leadership. Positivity,” Georgetown coach Shawna Slack said of the key to the G-Mens’ success. “You can teach skill all you want. But if you can’t jell together, if you can’t muster up that chemistry … they don’t beat themselves up and they don’t get down on themselves. That’s our magic. When all those stars align that’s when magic happens.”

Versailles went down in order in the bottom of the eighth. Georgetown pitcher Rylyn Dyer floated an off-speed pitch past a swinging Lauren Monnin for the first out. Natalie Prenger sent a ball to right that G-Men outfielder Heidi Crowe gloved with a diving catch. Jenna Dirksen … who battled Dyer on an eight-pitch at-bat, the longest of the game … went down swinging for Dyer’s 13th strikeout.

“She’s a good pitcher. (But) we were able to make contact,” Versailles coach Mark Voisard said. “I heard she had a wicked change-up and I’ll tell you what, standing down there (coaching) third base it was wicked. It had everybody off guard.” 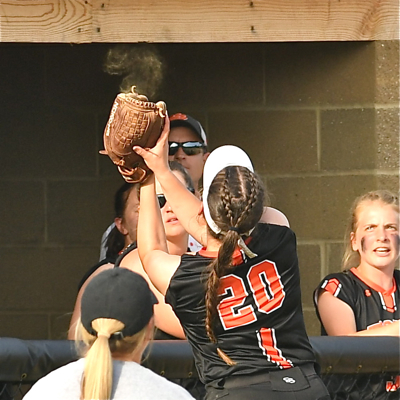 “The majority of our losses have been that way this year,” Voisard said. “Just couldn’t seem to get the timely hit when we needed.”

Georgetown scored in the top of the first on a lead-off single and two-base, run-scoring throwing error. The G-Men took a 2-0 lead in the top of the second using a single, error and wild pitch. Versailles tied it in the bottom half on Monnin’s lead-off triple and Prenger’s RBI single.

Versailles tied it in the fifth on Bomholt’s lead-off triple and Stammen’s RBI double.

“It’s a tough one to swallow,” Voisard said. “We don’t give up two runs on the two errors we had early in the game we don’t go to extra innings. That’s the way I look at it. We showed our tenacity and fought back.”

The Tigers’ defense turned in a few gems, started by Monnin’s putout from centerfield in the first inning. With a runner on second she fielded a grounder and came up firing home. Stammen grabbed the throw and in a sweeping motion tagged the runner out.

In the fifth, Dirksen came up with perhaps the play of the game. With the G-Men leading 2-1 and looking to advance a runner on first, Dirksen began creeping down the third-base line in anticipation of the bunt. It came, but was softly popped up. Dirksen made a lunging catch even lower than a shoestring grab and fired to first to double up the runner. 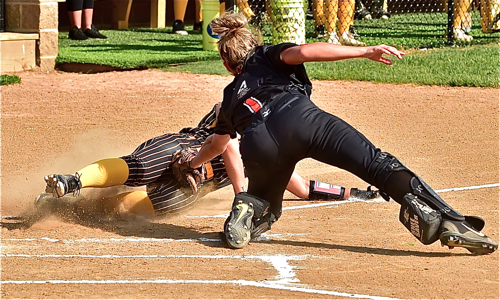 The defense also forced out the lead runner in both the third and fourth innings.

Versailles pitcher Tara Fritscher allowed eighth hits, struck out 10 and walked four (including one intentionally). She worked out of jams in the first four innings to strand six G-Men baserunners. They stranded seven overall.

“I told Tara … we’re going to ride you as far as we go,” Voisard said. “I can’t say enough about Tara. She’s going to be the big leader next year on this team. It was a tough loss for everybody.”

As for Georgetown, they made the roughly 90 minute drive back home (southeast of Cincinnati and about 20 minutes from the Ohio River) with a sense of relief. The G-Men’s last district title came in 2016. Before that it was 1993, when coach Slack was a shortstop on the team.

“They had a good pitcher and I knew they hit well,” said Slack, whose daughter Jaiden Slack now solidifies the defense at shortstop. “Frankly, Versailles hit better than we did today. I think they’re a good team and it was a good matchup. Fortunately for us we came out on top today. … That’s how softball goes. Sometimes you come out hot and sometimes it takes a while.”

Voisard and the Tigers don’t plan on letting it take so long for a return trip to the district tournament. Voisard and his assistant coaches emphasized working hard in the offseason. 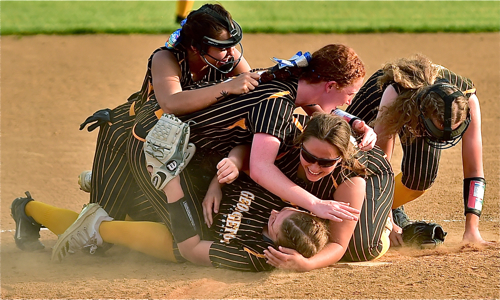 “Let this be a fire that keeps burning,” Voisard said. “Keep it burning and use that for motivation. A half-hour a day take swings or do tee work. Hopefully they take that to heart and come back with the same desire.”

“The senior class, (assistant coach) Abby Monnin kind of put it in perspective out there when we were talking,” Voisard said. “She said, ‘when I’m a senior I didn’t expect anything less from the underclassmen. We’re one team whether you’re a freshman, sophomore, junior or senior.’ They changed the culture of being team oriented. I’m very proud of all the seniors.”