Quarterback runs 4.44-second 40-yard dash and gets off one throw that was estimated to travel 65 yards before settling into the hands of receiver CJ Saunders; Togiai bench-presses 225 pounds 40 times and Browning shows off his athleticism as potential multi-position player. 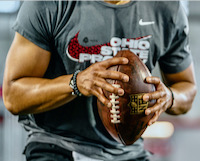 Columbus – Pro Day is not going to be breezy like this for Justin Fields when he’s playing in, let’s say, Pittsburgh in December with the wind whipping in all directions, the thermometer reading 30-something degrees and people outfitted in black and gold trying to crush him.

Fields was dressed in shorts and no shirt when NFL teams tested him from his toenails to the top of his head Tuesday with 14 other former Ohio State teammates inside the Woody Hayes Athletic Center.

But, man, oh, man, the guy put on quite an exhibition when he ran a 4.43- or 4.44-second 40-yard dash – scouts had varying times, but the latter was officially used – and threw what Buckeyes coach Ryan Day estimated was a 75-yard laser of a pass to CJ Saunders.

In all probability, it was about 65 yards.

“That was the best quarterback workout I’ve seen in a while,’’ one NFL scout texted NFL Draft Scout reporter Matt Miller.

Buckeyes coach Ryan Day said any Pro Day is an “awkward scene’’ because there are “100 people watching and that it’s quiet.’’

“At the end, I thought he was just showing off with incredible accuracy down the field,’’ Day said. “He wasn’t worried about being perfect.’’

Fields was aiming to break 4.4 in the 40, but settled for the fastest time by a quarterback since Robert Griffin of Baylor ran 4.38 in 2012.

“I stumbled a little bit, but I still showed the coaches how fast I am,’’ Fields said. “I’m fine with the time that I put up today.’’

Fields spoke about his strengths that he believes are passion, hunger to win and toughness. 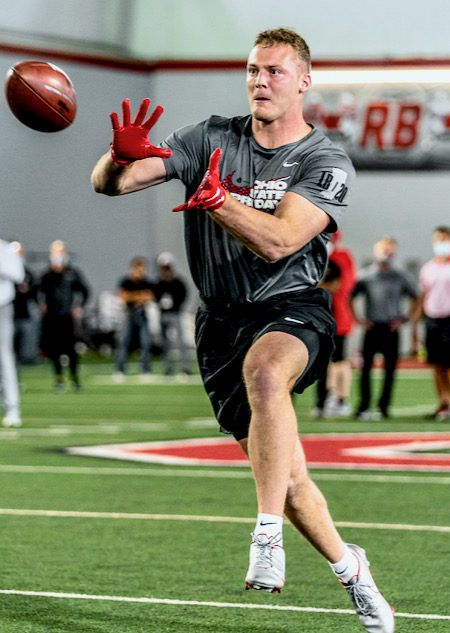 Ohio State’s tight end Jake Hausmann didn’t catch many passes as a Buckeye, but he gets accolades for being an outstanding blocker.

How did he think the audition went?

Only the Los Angeles Rams were not in attendance among the 32 teams in the league. There were 12 general managers and four head coaches, among them Urban Meyer of Jacksonville, Mike Tomlin of Pittsburgh and Mike McCarthy of Dallas.

What did Fields try to show?

“Just everything I’ve been working on since the season ended, drops from under center, off-platform throws, a different array of throws at all three levels just to show that I can make every throw on the field. . . my arm strength, a little bit of my accuracy,” Fields said. “

It seems every so-called football aficionado in America has taken Fields to task for locking on to his primary receiver, indecisiveness, holding on to the football too long in the pocket and maybe even the way he wears his socks.

Pro Football Focus reported that one NFL team broke down every one of Fields’ throws from 2020 and noticed that he looked off his primary receiver just seven times in 225 attempts.

Fields retorted yesterday that if you have Olave or Wilson open and they are the primary target, why run through progressions?

“I’m just not going to do that,’’ he said. “At the end of the day, those people (who criticize) don’t matter. Those people don’t determine whether we win or lose.’’ 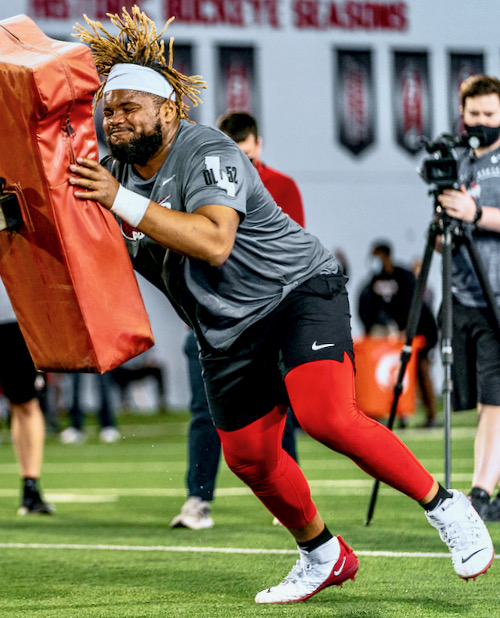 Buckeye Wyatt Davis is said to be the best pure offensive guard available in the draft.

Draft boards have him being selected behind quarterbacks Trevor Lawrence of Clemson, Zach Wilson of Brigham Young and Trey Lance of North Dakota State. One board even had him being taken behind Mack Jones of Alabama and as late as the eighth or ninth pick.

But there are tremors that San Francisco is very much interested in Fields at No. 3 overall and Atlanta, his hometown team, at No. 4.

Forty-niners coach Kyle Shanahan was at Alabama yesterday watching Jones, but is planning an individual workout for Fields.

Then there is the concern that Ohio State has had only Art Schlichter in 1982 by the Baltimore Colts and Dwayne Haskins in 2019 by Washington selected in the first round in nearly four decades.

“In all honesty, I think I’m different than those guys,’’ Fields said. “I think the only similarities between me and those guys is that we wore the same uniform.’’

It was proving day for many others, too.

Center Josh Myers of Springboro did not participate in agility drills because he had ankle surgery after the national championship loss against Alabama. He did bench press 225 pounds 29 times.

He said he would be up and running by “the end of May’’ and that two seasons of film “spoke for itself.”

Tailback Trey Sermon ran a disappointing 4.58 40-yard dash, but said “all you have to do is check on tape and see my play at a high level.’’ He did an impressive standing broad jump of 10 feet, 10 inches.

He said Pittsburgh told him that “they like my game.’’

Day pointed out that Sermon has value because “he doesn’t have a lot of miles’’ in terms of career carries.

“I thought it was a great day all around,’’ he said.

Asked about playing inside or outside in the NFL, Werner said, “Wherever I can excel, let’s do it.’’

Wyatt Davis has been labeled the best pure offensive guard in the draft. He has been recovering from knee surgery from an injury suffered the fourth game of 2020.

“Rehab has definitely been the priority for me, especially with going down in the national championship game,” Davis said. “I feel like I did a very good day of showing my knee is fine. It’s back to 100 percent.” 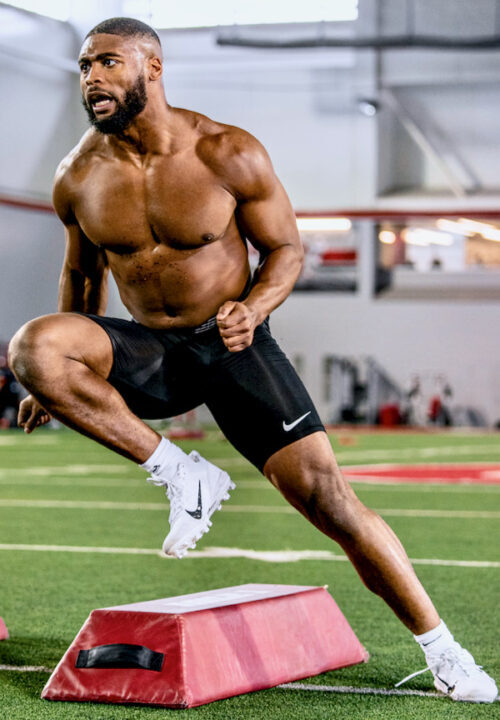 Some NFL teams think Baron Browning might be able to play defensive end as well as linebacker.

Two intriguing prospects are Baron Browning and Jonathon Cooper of Gahanna for their potential versatility as professionals.

“I think it helped me out a lot,’’ Browning said of his Pro Day. “My testing is what the NFL wanted to see.’’

As for playing multiple positions, he said, “I don’t put me in a box. I have flexibility. I think a lot of teams like that about me. I wouldn’t be opposed to it.’’

Browning didn’t play much until 2019 and was in a job share last season. He credited recently retired defensive coach Greg Mattison for helping him.

“I’m thankful for the journey,’’ Browning said. “(Mattison) made me into the man that I am today.’’

Another intriguing player has to be linebacker Justin Hilliard. He was a Buckeye for six years because of two bicep surgeries.

Hilliard came into his own last season to the point where he started against Clemson and Alabama in the College Football Playoff.

“A vast majority of the injuries were to the upper body,’’ he said. “I don’t think they will be an issue. I think this is just the start for me.’’

Hilliard thought he’d become a draft prospect way back when.

“This doesn’t come as a surprise to me,’’ he said. “This is something I’ve been working a lot of time on.’’

He is projected to be a fourth-round pick. 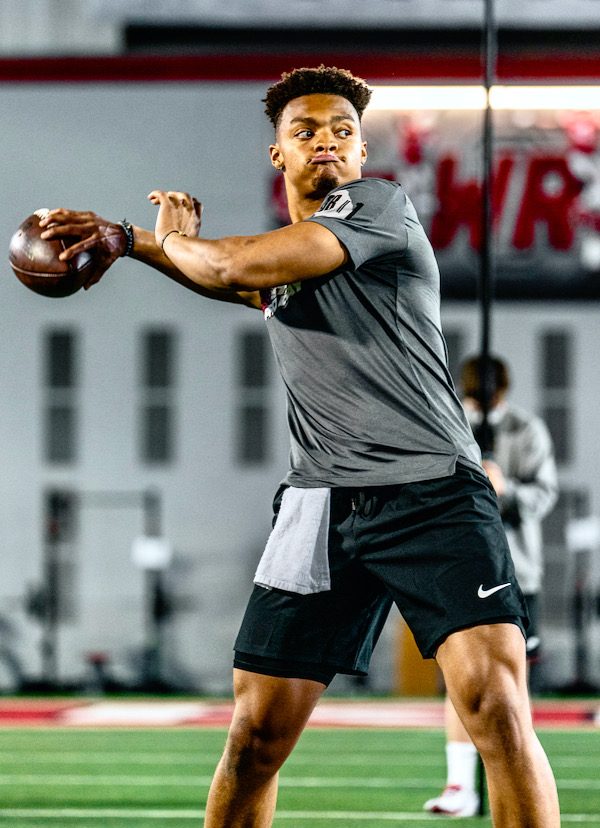