Another Year, A Few More Pains…And Nothing Different

On the occasion of turning another year older this week, let me share the reality of people with experience, why we are what we are, and that life goes on with, or without you.

And I’m privileged to still have the woman who made it happen, my mother, who at 93 is locked down in a nursing facility because we do what’s best for people of her generation.  Just ask the governor of New York.

Let me say that 69 is not that much different from 68, 67, or 57, for that matter.  A few more pains that will never go away, regardless of what they say about Skyrizi.  In fact, I wouldn’t turn up my nose at a good rash just for the sake of something new.

I don’t celebrate my birthday, at least not much.  I never have.  I wasn’t taught to when I was a kid because it wouldn’t have made any difference.  We couldn’t afford what I would have asked for, anyway.  And I didn’t know what to ask for because we didn’t have a TV until I was eight years old, so I didn’t know my options.

A really special meal, maybe, and that was usually supper at the Frisch’s in Chesapeake, Ohio…back when a Big Boy costs 50 cents, and dinner for three was under five dollars, including tip.

I heard from a school mate this week and we talked about birthdays, because his and mine are on the same day.  He was telling me about taking his family to Cancun for a week to celebrate.  He asked me about my plans.

I listened respectfully, and admitted that it wasn’t that big a deal to me – just another year older.  He was aghast!

And then, “Do you celebrate anything?”

Not much anymore, since the kids are grown.

It made me pause for a moment because it’s a very relevant question when you’re 69 and consider what you’ve missed doing for the previous 68 years, and why.  Exactly why are we the way we are?  And how did we get that way?

Environment, for sure…and what we were taught at home at an impressionable age.

For instance, I’ve always liked liver – beef liver, pork liver, chicken liver, it didn’t matter.  And I liked it because when I was a kid my mom told me it was steak.  And I knew steak had to be good because the other kids at school talked about it.  So when Mom told me liver was steak I didn’t want to be out of step.

I’ve always liked working, even on holidays when everyone else is off playing golf or at the lake.  My own household complains. 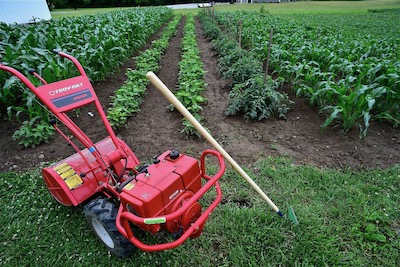 Why am I this way?  My dad always said that working, even on a holiday, was an opportunity to get ahead and be productive – that a free day was a terrible thing to waste.  So we’d work at something – anything – as long as we were making good use of our time.

Fast forward forty years and nothing’s changed.  Last Memorial Day I picked thirty quarts of strawberries with Laynie, my daughter.  Last 4th of July I mowed thirty acres of grass, because rain was predicted the next day.  Last Labor Day I canned tomato juice, and so on.  This is what I do.

And for how much longer?

Believe it or not, it gives me comfort to know that I don’t have that much longer.  From my seventh grade class of seventeen in 1965 there are only nine of us still living.  I figure I have maybe ten more years, fifteen at the most, and that’s fine.  At this age I’m sick of working to send so much of what I produce to Washington, to Columbus, and to Jim Stubbs, the county treasurer.  Because the older you get the more you realize that the exchange between parties really isn’t that equitable anymore.

I’ve thought about it, and people who have a record of paying taxes since they were 21 have probably paid enough.  At the risk of sounding like Andy Rooney, NO ONE 72 or older should pay a dime in income tax, inheritance tax…and property taxes should be discounted 50%.

But I won’t live long enough to see that, or for Jim Stubbs to actually stop by the house to say thanks.

So I’m immensely blessed to have Press Pros, and something interesting and productive to do.  I’m blessed to hear from so many people who write, or tell me in person that they appreciate this effort.  And I push on for the sake of giving a start and opportunity to people like Andy Anders, from Chillicothe, Ohio State School of Journalism (class of ’20),  and Press Pros columnist for the past two years who this week accepted the job of Sports Editor for the Wetumpka Herald newspaper, in Wetumpka, Alabama.

Oh my goodness…I’m happy, and proud of him!

When he called me Tuesday, excited, to tell me he had gotten his first job…I felt like celebrating!