How ‘Dirt Bag’ Baseball Is Working For The Buckeyes’ Nick Erwin…

Waiting with everyone else to find out if, and when they play baseball in March, Buckeyes third baseman Nick Erwin has no issues with any of it.  After what he’s been through, all he wants to do is play.

Put it this way.  If you’re not an admirer of competitive people – understand what drives them – you need to meet Buckeyes third baseman Nick Erwin.  The third baseman from nearby Grove City is a walking, talking bundle of energy to get back to doing the thing that fits his mantra, his personality, and his upbringing.  No one…wants to play baseball – again – more than Nick Erwin!

Oh, there’s thousands that will tell you what it would mean to them…but we’re pretty sure that face to face, it’s Nick Erwin who best ‘talks’ the talk, and ‘walks’ the walk.

There’s a price to pay to do that which really brings you fulfillment.  For Erwin it’s playing third base for the Buckeyes, and the price he paid was an unexpected hamstring surgery that forced him to sit out most of fall practice back in 2019 and all of winter workouts.  Not until opening workouts and a couple of early appearances in Florida in February, 2020,  did he finally get back on the field.

Hamstring surgery is a far cry from a pulled hamstring.  It’s a dicey procedure – reattaching that dominant muscle in the back of your leg to the bone. Athletes get it done, but recovery is never certain, and consistency with how you return to normal activity is always uncertain – almost as uncertain as the procedure itself.  Many scrap any future athletic agendas and call it bad luck.  Erwin reverted back to his high school culture.

When he played at Grove City the Greyhounds baseball team adopted the nickname, ‘Dirt Bags’, denoting their competitive and feisty style of play.  You couldn’t play in a clean uniform, and your commitment was questioned if you did.  It was ‘hell-for-leather’ and whatever it takes.  It helped Grove City win 75% of Erwins high school games and become an yearly OHSAA tournament participant. 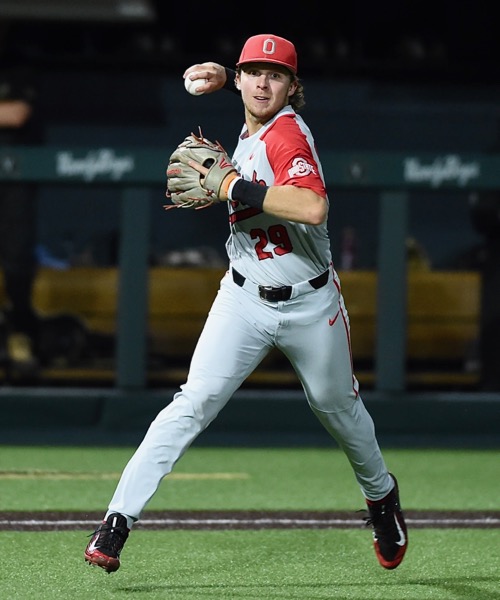 His play at third base is steady, and sometimes eye-opening…drawing the attention of opposing coaches.

He came to Ohio State in 2019 with strong credentials, and after a shuffling of the infield because of a slow start he ended up starting 38 of the 42 games in which he played.  He hit just .235, but his play at third base caught people’s attention.

“Whoever that is….,”  said Vanderbilt assistant David Macias during the NCAA regional tournament in Nashville.  “that dude can play serious third base.”

He came to fall practice in September ready to take his game to another level.  And then…life, and his game was put on hold with the hamstring.

More…after just three weeks of play in 2020, in which he played in nine games and started five – in which he hit a robust .368 with a homer and 8 rbis – Covid, his game, and his life was again put on hold.

Remember, if you’re not a baseball fan, you really do need to meet Nick Erwin.  In the span of just nine innings, or by the end of this story…you will be!

“I can’t wait to play baseball again,”  he said last week, showing his most heart-felt optimism.  “I don’t think Covid protocols will be a distraction to us, because I’ve watched the other sports have their season and nothing is perfect.  You have to roll with the punches.  If we have to travel early to play league games, that’s OK.  We always travel and stay in hotels.  It’s just another test, and at some point you’re always going to be tested.

“I’m so tired of waiting…we’re all tired of waiting.  We’re anxious to play because some of us didn’t get to play last summer, and if you did play summer ball it’s not the same as playing Buckeye baseball.”

“Comes from high school and my coach at Grove City,”  he smiles.  “Whatever it takes.  The team that works the hardest has the most success.” 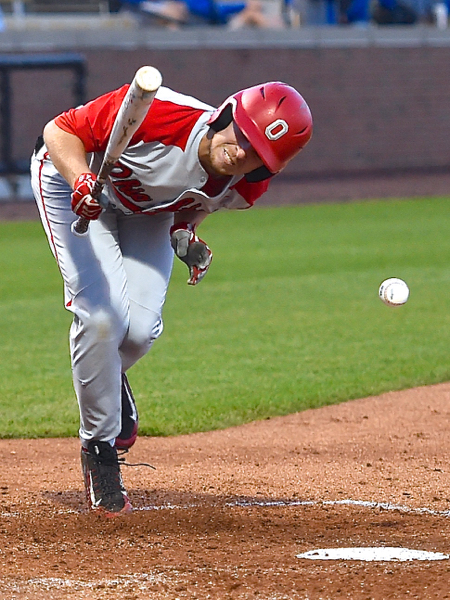 Whatever it takes, if it means taking one in the ribs.  Those who work hardest have the most success!

He’s taken that to heart?  His high school coach, Ryan Alexander, has imprinted him.  The average recovery time for a hamstring reattachment is nine to twelve months.  Erwin made it back to action in 5 1/2 months, and was just beginning to feel like we was walking on two good legs when March the 11th, 2020, struck – Covid!

Now, he anticipates an opening day for 2021 – and whatever kind of season comes thereafter.  The two-time All-Ohioan from Grove City has so much pent-up optimism he’s prone to walking on air.  He craves action, and there’s been none for so, so long.

So he works daily with coaches Kirby Pellant and Matt Angle – with Pellant on his skills around third base, and with Angle to build on the hitting success that was curtailed after just nine games last year.

“I just try to get better each day, and they help me,”  he smiles.  “For me its as much mental as physical.  That’s my advantage.”

Angle, the Buckeyes hitting coach, nods in the affirmative that he’s a good student.

“All he needs is to just make hard contact – line drives,”  says Angle.  “And that’s what he does.”

The little things, like what he learned at Grove City – ‘dirt bag’ baseball.

Those who work the hardest have the most success! 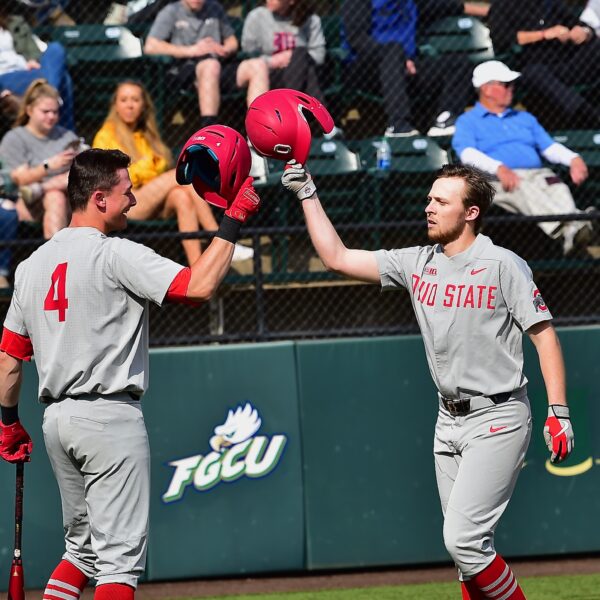