Slow to start, Anna’s Isaiah Masteller warmed to the task, put on a show, and drove the Anna Rockets to a workman-like win over Mechanicsburg in the D-III sectional opener.

On the other end of the floor, Mechanicsburg coach Mike Cantrell had that look that you get when you eat bad fish.

The reason for both?

Masteller had collected 13 of what would become a game-high total of 29 points and had powered the Rockets from a 15-11 first quarter deficit to a 29-24 halftime lead…on the way to an eventual 67-52 Rockets win.

Slow to start, like the rest of the Anna lineup, Masteller went ‘ofer’ on his first three shots, then threw caution to the win, started attacking the rim, and from that point on Mechanicsburg never had a chance.

He would score 7 in the first, 6 in the second, 9 in the third, and 6 in the final period for his 29 points, contribute 5 assists, and a pair of steals on his way to his most complete game of the season, the most complete game of his career, and all when it mattered the most.  Tournament time, he would say later, “Is you either win or you’re done.”

And Mechanicsburg did their best for a half to make that happen.

They limited the three-point shooting.  Anna would finish with just two for the game – one by Masteller and one by Jacob Robinson.

They did their best to limit transition, and for most of the first half were successful because the Indians started out by shooting a good percentage from the field, and three-point range. 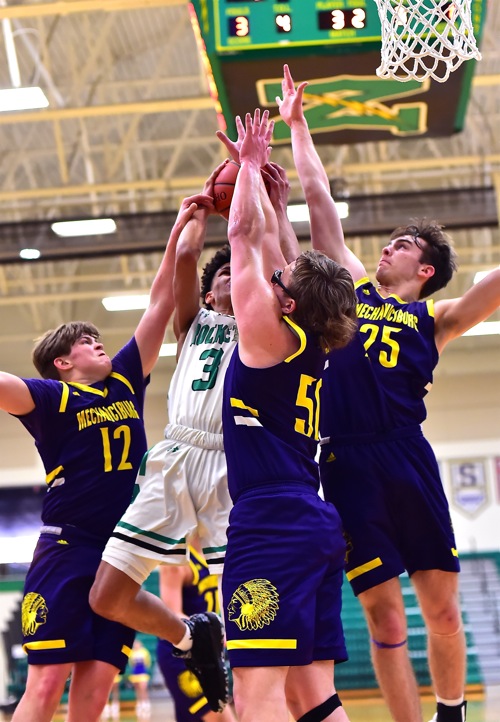 All hands on deck…By the second half Mechanicsburg was sending the house to try to stop Masteller from getting to the rim.

And because they were hitting shots Anna had to take the ball out of bounds, giving Mechanicsburg time to go down the court and set up in a zone defense.

But at the six minute mark of the first quarter, when Anna was playing more like ‘Polly’anna than the #3 seed in the bracket, a frustrated Masteller took matters in his own hands.

“I started attacking,”  he said quietly later.  “I knew they couldn’t stop me…that I could beat them off the dribble.”

And he started beating the point of ‘Burg’s defense every time down, penetrating the lane, and on to the hoop.  The rest of the ensemble took his lead, playing with more confidence, aggression on offense and defense, and little by little Anna’s game began to fall in place.

“When he attacks like that he opens things up for everyone else, and he’s done that now for the last three or four games,”  said Nate Barhorst in the post-game locker room.  “He was getting to the rim, he was finishing down low, getting to the line…everything we needed.  But the biggest thing of all was his defensive intensity.  He’s now come full circle this year at both ends of the floor.  He’s amazing, I’m proud of him…but the other guys stepped up and filled their roles, as well.  I’m proud of them all.”

For a quarter Mechanicsburg played much better than a #17 seed.  Guards Hayden DeLong and Kyle Smith hit a trio of first quarter three-pointers to keep the Rockets on the launch pad – long enough for Masteller to get a belly full of waiting for something better to happen.

“We watched them on film and I KNEW I could get to the rim,” said Masteller.  “Off those ball screens…I knew that either me or Ben (Kovacs) was always going to be open.” 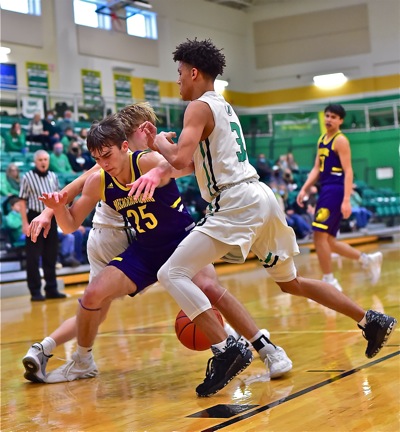 Late defense started the surge…Zach Ambos and Isaiah Masteller team up to shake the ball free from ‘Burg’s Kyle Smith.

And the second-happiest guy on the bus ride home was Kovacs, who in the second half became the recipient of one pass after another from the ‘attacking’ Masteller when the ‘Burg defense collapsed to stop him from getting to the rim.  Kovacs, true to the film, was standing wide open under the rim.  Time after time Masteller found him…the final time with a running behind-the-back strike from the open court that dropped the jaws of the Indians’ defense.

Leading 29-25 at the half, Masteller immediately started where he left off at the break, and as he drew more attention it allowed McKane Finkenbine to operate with more liberty, finding open shooters.

He found Jacob Robinson, who hit a big three from the wing to discourage a ‘Burg comeback threat midway through the third quarter.  The Indians would cut the lead to five at the four-minute mark, but Masteller and Kovacs quickly shifted into another gear to kick it back out to ten by the start of the fourth.

Zach Ambos helped get the transition game going with his defensive pressure on DeLong and Smith, causing a couple of turnovers and grabbing a steal that turned into an ‘and one’ at the other end.  Ambos finished with just 4 points, but his defense was worth three times that.

Masteller would score 7 in the fourth…but Kovacs scored 10 of his eventual 20 points in that eight minute span, on one open look after another and a pair of free throws.

Their biggest lead would reach 20 points, but in the end the 15-point win suited Barhorst and Masteller just fine. 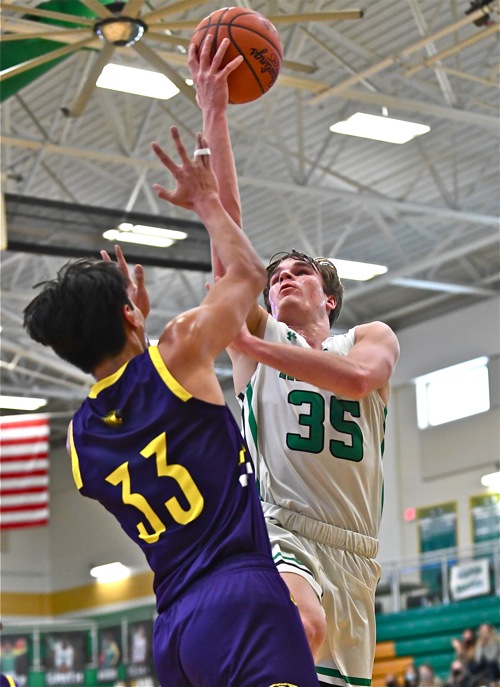 Ben Kovacs feasted in the fourth quarter, scoring 10 of his 20 points in the final eight minutes.

The Rockets coach talked ‘coach speak’ after the game, detailing issues with Mechanicsburg’s early defense, the slow start, and the obvious issue of what it took to finally get going.  But in the end he smiled and focused on the obvious.

“Isaiah was the difference,”  said Barhorst.  “And I told them afterwards that we probably don’t come close had we not started attacking the rim like that.  Defensively, we lost DeLong a couple of times and out of our zone and we couldn’t go back to it.  He was going to make shots.”

Masteller had his 29, Kovacs finished with 20, Finkenbine quietly added 11, Ambos had his 4, and Jacob Robinson had his lone three-pointer as the Rockets torched ‘Burg in the second half with 16 in the third and 22 in the fourth.

For Mechanicsburg, Kyle Smith led them with 17, DeLong had 14, Joshua Lim had 8 and Brooks Tom had 7.

Tournament basketball is a different type of pressure, of course, even for someone accustomed to a double dose each year of Fort Loramie, Jackson Center and Russia.  Masteller was noticeably energized by the win and the opportunity for more win-or-you’re-done basketball next week.

“For us seniors we’re going to play our hardest because if you lose it’s your last game – you’ll never play again,”  he offered as he headed for the door.  “We gotta’ give everything we have now.”

He got on the bus back to Anna, having left no one in doubt.

“The Spot” Restaurant, in Sidney, is proud to be the official sponsor of the 2018 OHSAA basketball tournaments on staging.pressprosmagazine.com. 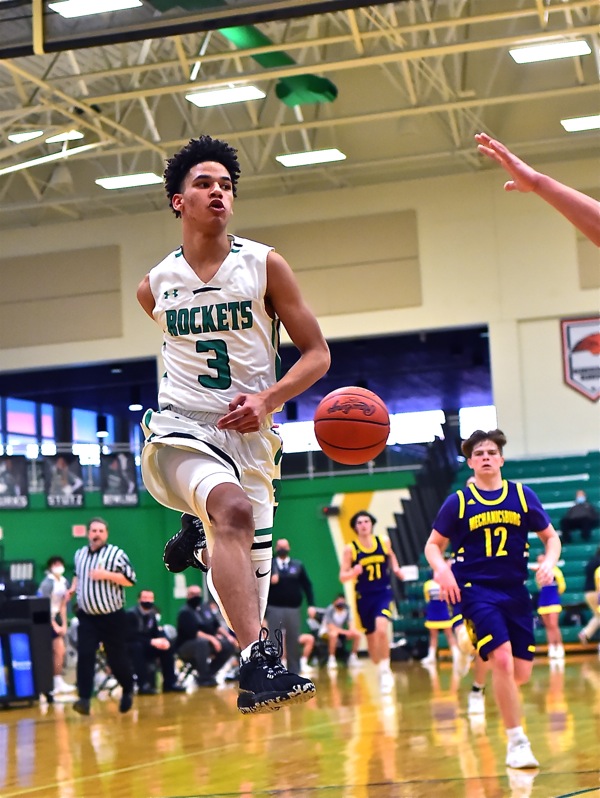