For many it was their first foray into the field.  For others, rabbit hunting is still the best tonic for a case of the mid-winter blues – cabin fever they call it.  Whichever it is, it still brings a smile to many a young boys’ face, regardless of their age.

Gretch,  the evidence of the secret romance of a neighbor’s beagle and block-wandering terrier, was given to me when I was 13. She was soon joined by Chipper, a true-blue bench beagle and the three of us would canvas the countryside on untethered walks. I guess it wasn’t until a friend’s father stopped by the house that I realized what I really had.

“Heard you got a real beagle,” he said as Gretch and Chipper rounded the corner of the house as if on cue. Chipper’s blocky head, confirmation and perfect coloration nearly screamed champion while Gretch’s pointy nose belied much of her beagle heritage. “That pair ought to be fine bunny dogs.” 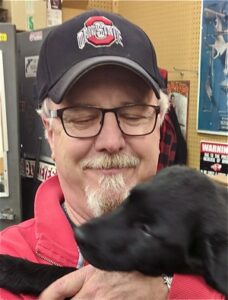 The two dogs glared at me with a “That’s what we been trying to tell him” look and the light bulb slowly brightened above my head. These were real hunting dogs! Sure, they might have been free and the last of their respective litters to leave home – but they were my very own hunting dogs! After that day, life was never going to be the same.

As soon as November rolled around, there was barely a weekend that the three of us weren’t exploring the local farmland for a rabbit or the occasional pheasant. Gretch and Chipper were like gamboling puppies as they dashed in and out of impassable thickets, changed directions without reason or suddenly froze with noses testing the air. When they located a hiding rabbit, a bawling howl and an excited non-beagle yip would announce their pursuit. It was time to watch for an open shot.

The two stooges, an affectionate term for that dashing duo with me being the third, were responsible for putting a lot of rabbits in the freezer over the next ten years. The stooges have been gone a long time now but I can’t help but smile at just the memory of their clownish antics and their love of the chase – my very first hunting dogs. 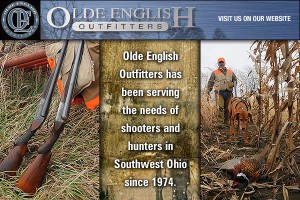 For many, rabbit hunting is what coaxed them into the field for the first time. The season is long and generous in Ohio, with a limit of four per day. It begins in early November and continues through the end of February. It’s a great way to introduce youngsters and novices to the disciplines necessary for a safe hunt and the constant activity and sudden action leaves little time for boredom.

The fundamentals are pretty straight-forward. Besides a hunting license and permission to hunt, you’ll need a shotgun. The great part about rabbits is that they aren’t particular about your guns or gauges. Anything from a .410 to a 12 gauge will get the job done and shot sizes from 5s to 7 ½s work just fine with 6s being the most popular.

For me, a double barrel shotgun always seems to work the best. Preferring two triggers, these guns give me the instant ability to choose between two chokes which could be a deal breaker in some situations. An old Fox Sterlingworth 16 gauge, choked improved cylinder and modified, became my standard when following Gretch and Chipper and I always felt it was almost a bit of a cheat. A good friend prefers his 20 gauge pump and, well…he does outshoot me on a regular basis.  As I said, rabbits aren’t particular about guns or gauges so use your favorite. 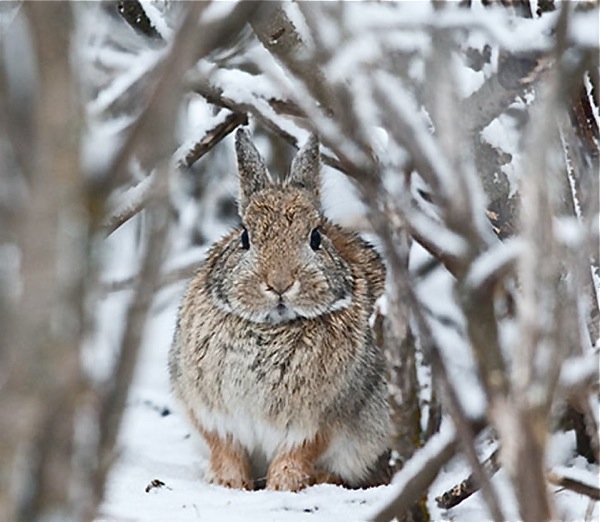 A good brace of beagles or bassets may add to a rabbit hunt but that certainly isn’t the only way to put a bunny in the game bag. Walking up rabbits in a brushy area has long proven a great way to push them into a mistake. That’s when your marksmanship comes into play because the shot opportunities can be fast, fleeting and frustratingly difficult.

There are also those that like to walk more quietly and try to flush the quarry with less of a panicked rush while using a .22 rifle to get the job done. One hunting buddy loved his Savage made over-under combination gun; the top barrel chambered for 22 long rifle and the bottom a .410 shotgun. He proved it to be a deadly and versatile combination. I even watched one guy take his limit with a recurve bow. That’s quite a challenge.

The most successful at stalking their quarry with those rifles and bows have learned a secret. While you’re rabbit hunting you can’t look for the rabbit; bunnies have been gifted with a coat that offers perfect camouflage. These hunters have learned to watch for the twitch of an ear or the round dark shiny eyes that looks out of place in the angular world of weeds and trees.

Sturdy walking boots and brush pants are a couple of other items that are good investments for a day’s hunt. I also have a tendency to wear a leather glove on my left hand. It helps move some of those nasty briars allowing me to keep more of my own blood on the inside. Most importantly, a blaze orange hat or vest is imperative. You’ll be hunting in rough, brushy areas and you want to be sure of everyone’s location. There’s no room for avoidable risks. 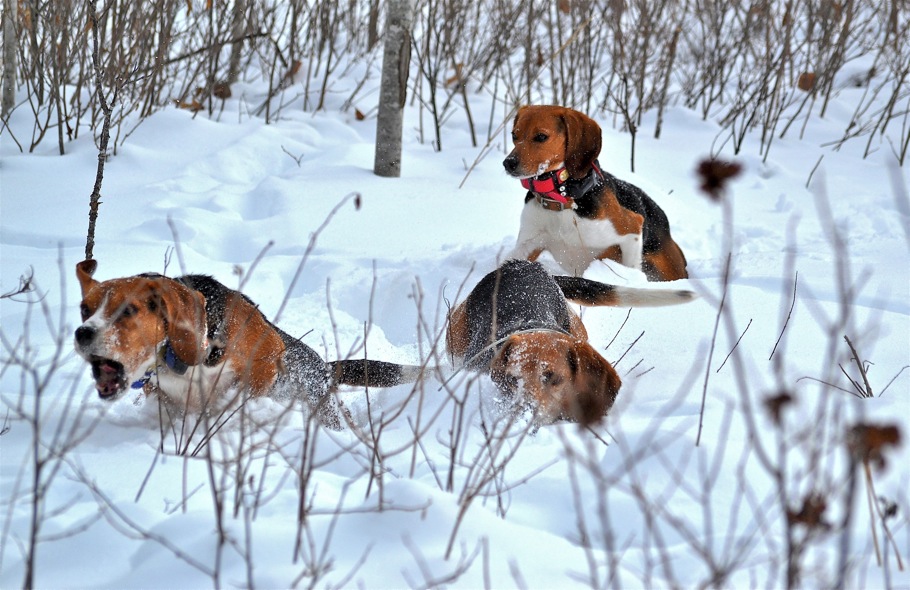 A very important consideration is where to hunt. While there are plenty of opportunities on state wildlife areas as well as private farm ground, recognizing good habitat is vital to finding rabbits. I like to call it “rabbitat.” Most think of thickets and crop field edges as the best spots to bounce a bunny, but woodlots have rabbits hiding, too. Look for them in brush piles, honeysuckle patches and fallen treetops. Because such areas usually receive less hunting pressure, they can often hide extraordinary numbers of rabbits.

Also remember that rabbits are accustomed to being hunted twenty-four hours a day, all year long. They are alert, suspicious of movement, know when to hold tight and to run early. It pays to keep your senses keen. They also have a habit of running a wide circle when pursued by dogs so keep on eye over your shoulder.

Regardless of whether you have beagles, bassets or are hound-less, the most important ingredient for any rabbit hunt are the friends or family tagging along for the fun. There is something about rabbit hunting that just begs for company. Happy bounding dogs working on becoming legends, laughter, kids learning the skills of hunting and the reacquaintance of old friends make these upland hunts especially enjoyable.

Far sooner than we would like, some will fire their last shot without even knowing it and you’ll be left with the memories of frolicking dogs, smiling kids and old friends – all thanks to Brer Rabbit.

“The best thing about hunting and fishing,’ the Old Man said, ‘is that you don’t have to actually do it to enjoy it. You can go to bed every night thinking about how much fun you had twenty years ago, and it all comes back clear as moonlight.” – Robert Ruark 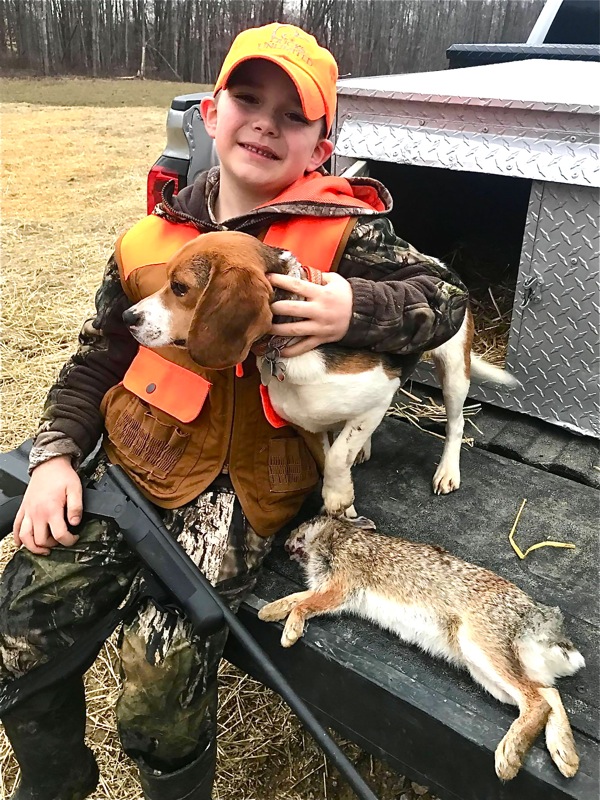