Except For The ‘Lapses’, Perfection…Tigers Top Flyers

Scott Elchert and Jackson Center drew one of their better defensive performances from the deck to stop Marion Local for a second straight night.  Nearly perfect, in a 46-36 win.

Jackson Center, OH – It wasn’t a great weekend for Marion Local coach Kurt Goettemoeller and the Flyers.  For a second straight night Saturday they found themselves swimming upstream against one of the better defensive efforts you’ll see in any given basketball season.

Friday night it was a masters class from Minster, and Saturday ‘Mr. Defense’, himself, Jackson Center’s Scott Elchert, gave them the doctorate dose, handing the Flyers their second consecutive loss, 46-36.  It left Marion 8-8 for the year, and that nagging notion in your mind that you might not have scored 50 if you’d played ’til midnight.

It can be discouraging!

“They’re so hard to play against because they guard you so hard,”  said Goettemoeller.  “They know you, they scout you so well, and when you have a superstar player like Aiden Reichert all your attention has to go towards him.  To their credit, they hit some big threes with kids other than Reichert.  We wanted them to prove they could win apart from him, and they did it.

“To our credit, we got back into it a couple of times, had a chance to get it to two at the end, but it just didn’t go our way,”  he added.  “Jackson Center plays like a veteran team, even with their youth…because a Scott Elchert team knows how to close out a game.” 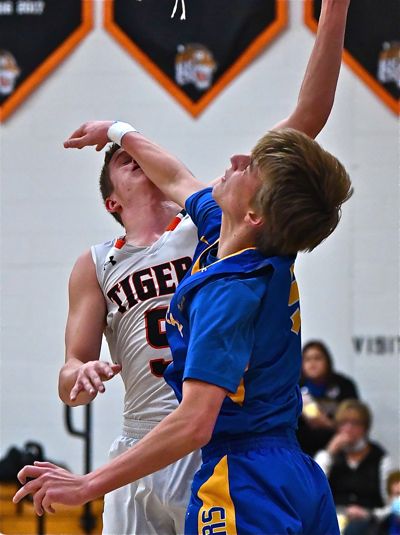 Elchert listened in his office later to what Goettemoeller had shared in complimenting his team’s effort.  In fact, a near-perfect effort, even for a perfectionist who grades as tough as Elchert.

“Yeah,”  said Elchert, with a grimace.  “But we had some lapses.  Look, they are really good at doing what they do.  They run great offense and they run you off so many screens.  They made us spend a ton of energy tonight, and when you have that you have lapses.  Then defensively they make it tough to score.  So our goal tonight was to win EVERY possession, because that’s how hard they compete.”

Lapses?  LAPSES?  Did you say lapses?  Jim Mora would have asked.

When you hold a team as athletic and physically committed to less than 40 points for a second night in a row…you might expect to have some lapses.

A team with shooters like Alex Eyink and Brady Ronnebaum, two of the more guiltless three-point snipers in the area, you’re gonna’ have some lapses.

Example?  After falling behind 10-2 in the first four minutes of the game, it was Ronnebaum and Peyton Otte who shot Marion back into contention on near-consecutive threes…and from that point on it was a game.

It was 13-11, Jackson, at the end of the first period…and then they really got down to it.  Jackson would score 5 points in the second quarter on a bucket by Jace Mullenhour and a basket and free throw by Aiden Reichert…and Marion would answer with an outburst of their own on an Eyink basket and a free throw by teammate Alex Knapke.  Someone mentioned rust forming on the rims.

They pretty much reprised that pace for the first four minutes of the third quarter, before Marion had a couple of point blank shots roll off the rim…and a pair of long three-point attempts by Ronnebaum and Eyink failed to connect.  Jackson Center took advantage, scoring on four of five possessions as Mullenhour and Reichert revved up to each score twice and push the lead out to 9 points. 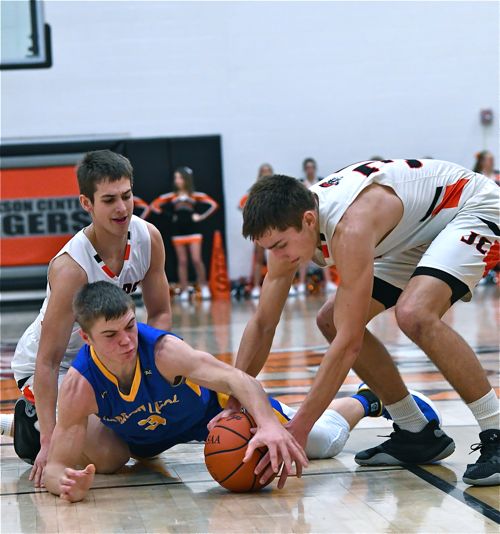 Marion’s Alex Eyink battles the Tigers for a loose ball.

But Marion called a timeout, regrouped, and went back to work, scoring on an Otte three-pointer and a pair of buckets by Eyink and Ronnebaum.  Jackson led 30-25 as the horn sounded to end the third.

Through all of this Aiden Reichert was having one of his best games of the season, despite being hounded on every possession by Marion’s Charlie Huelsman.  Huelsman wore him like a shirt, forcing Reichert to play with patience, and rely on teammates to execute independent of him.  It worked, and it had to work because Eyink would connect for three 3-point shots from extreme range in the fourth to eventually close the Tigers’ lead down to 36-34.

Undaunted, Reichert turned to Mullenhour, who scored on a three of his own and a couple of shots in transition…and Carson Regula, who broke the backs of Marion’s comeback attempt with a wing three-pointer over the outstretched arm of Ronnebaum.

“Aiden played with great patience,”  said Elchert.  “And he’s gotten good at allowing the game to come to him.  He plays through his other players because he knows they can complement him.  We’re blessed to have him on our team.”

As if a black cat had walked in front of the Marion bench, they had a couple of point-blank misses in the final 90 seconds when they could least afford them…and Alex Knapke would make a steal at halfcourt and drive to the rim for a layup that would helped.  But that shot rolled off, too.

“We knew those two (Eyink and Ronnebaum) could shoot from range and we were concerned in the fourth quarter,”  admitted Elchert.  “It was in our scouting report and it did not catch us by surprise.  So we didn’t get out on a couple of those shots and a couple of them didn’t go in…luckily.  We had some missed assignments and didn’t switch out on those – blown assignments.  But we survived it.”

Still, even with a couple of blown assignments there was no mistaking, or overlooking, one of the season’s most committed defensive efforts by both teams, but especially by Jackson, given the physical challenge of Marion Local – a team that can will their way to wins against the best of efforts. 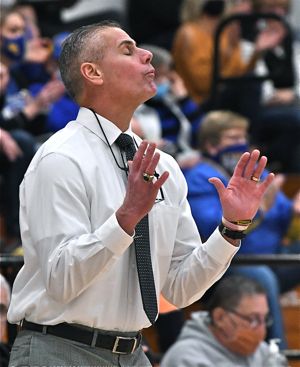 Near perfection…they were this close to it.

Aiden Reichert and teammate Jace Mullenhour would lead Jackson Center with 15 points each.  Carson Regula had 7, Camdyn Reese had 4, and Nolan Fark would finish with 3.

For Marion, Alex Eyink had a brilliant game on both ends, leading all scorers with 17 points and 3 three-pointers.  Brady Ronnebaum had 10, including a pair of threes,  Otte added 6…Charlie Huelsman had 1 point.

Jackson Center improved to 13-4, and ironically, three of those four losses came at the hands of Shelby County League rivals.

“We hit some huge shots tonight (Regula and Mullenhour), and honestly in some of our tight losses we didn’t hit those shots that would have put us over the edge – Botkins as a case in point.  Hopefully this is another sign of growth with our younger kids – that they understand what it takes.

“I feel like they’re beginning to understand at this stage of the year, but we still have too many lapses in the course of a game that we have to correct.  But I believe we’ll get that corrected.”

But Scott, for the good of the order…what team in Ohio doesn’t have a few lapses – even 13-4 teams? 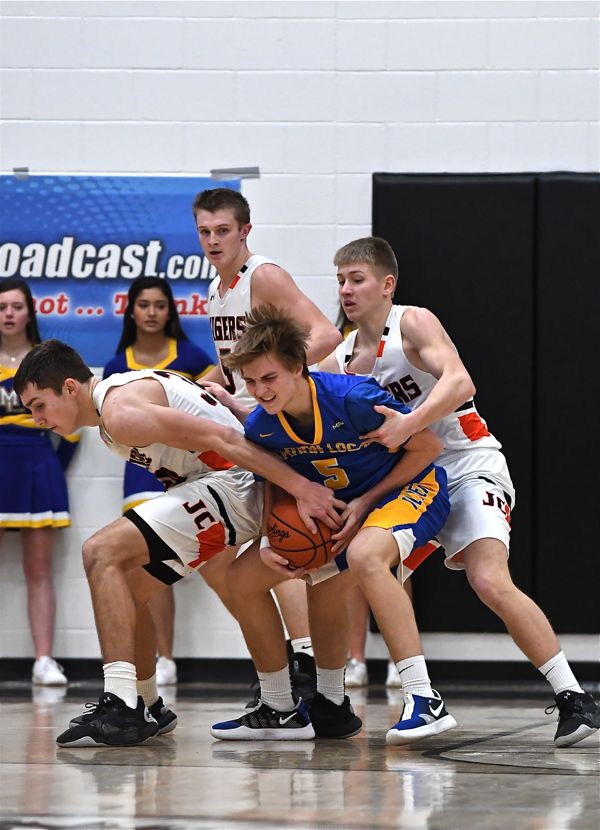 You know a team's good defensively when they can do it behind their back. Jackson Center clamped down on Marion guard Brady Ronnebaum. (Press Pros Feature Photos)