Proficient in three sports (football, baseball and bowling), Versailles’ Landon Henry is good at all of them…and differentiates himself with his versatility.

Versailles, OH – Versailles junior Landon Henry knows, and understands.  It’s hard to be a standout in the Midwest Athletic Conference.

And multiple-sport athletes, at that.  A lot of them play three sports – football, basketball and baseball.

But Henry, a 6’2″, 190 pounder, does stand out for the fact that while he plays football and baseball at Versailles…he also bowls, and bowls well.  In fact, among MAC footballers that do bowl…he might be the best of them.

For proof, in individual competition Saturday morning at Minster’s Community Lanes he bowled a 241 and 238, improving on his pre-match average of 198.

“Bowling’s something I started doing when I was in the sixth grade,”  he says.  “I tried basketball back then but I didn’t like it, and liked bowling because my dad bowled in a weekly league, I caught onto it pretty quick, and I just stuck with it.”

A lefthander, he’s pretty much self-taught, and has his own unusual style of throwing the ball.

“He’s a little different,”  says Versailles coach Tyler Phlipot.  “We tried early on to have him get his hand under the ball more to get more spin, but it didn’t work for him.  He kinda’ just walks up there and flips it with a short motion, he gets good spin, and it works for him.”

“My dad (Mike) has worked with me, but it’s just the way I throw it.  And I’ve always thrown it that way,”  he shrugs. 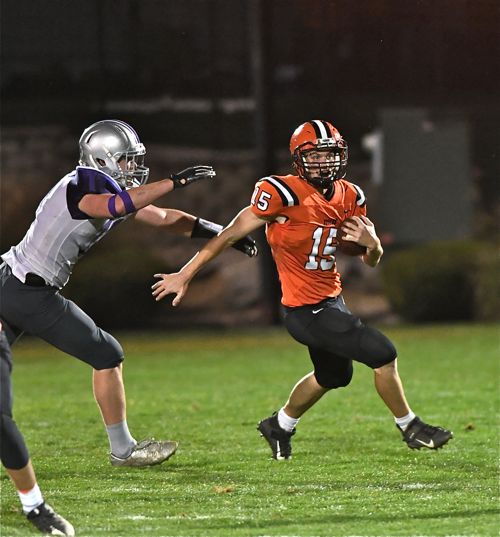 Henry teamed with Jack Osborne to give the Tigers one of the MAC’s most formidable running back tandems in 2020.

If it ain’t broke, why fix it?

He also plays baseball at Versailles, part of a talented group that will compete for the MAC title this spring.

And last fall on Versailles’ 5-3 Division V playoff team, he teamed with Jack Osborne to give the resurgent Tigers program one of the MAC most formidable backfield duos, running for better than 600 yards in eight games and firmly establishing Versailles as one of the league favorites in 2021.

“It was a good year for us,”  he says.  “And I think everyone’s excited for next year.  My grade (senior) is very close and we have a lot coming back – Carson Bey, Eli McEldowney, Jack (Osborne) and most of our linemen are coming back.  Hopefully we’ll have a full season.”

If you ask him about stats he’ll give you a shrug.  He really doesn’t know – doesn’t play for the sake of numbers.

The biggest buzz at Community Lanes Saturday morning was the threat of a perfect 300 game by Coldwater sophomore Brandon Hammons.

Hammons threw nine straight strikes and left a solid ten pin on his first ball in the tenth frame.  He finished with a 267, his highest game ever.

“Brandon’s really had a good year for us,”  said Cavaliers coach Rick Hartings.

“He was on our state tournament team last year, but he wasn’t one of our top guys – maybe seventh or eighth.  He played football this year, but they cut the roster short for the playoffs and he got an earlier start for the bowling season.  He’s a very talented player, one of our top three sophomores, and he’s really been lighting it up this year.  Today put him over 200 for an average in MAC play.” 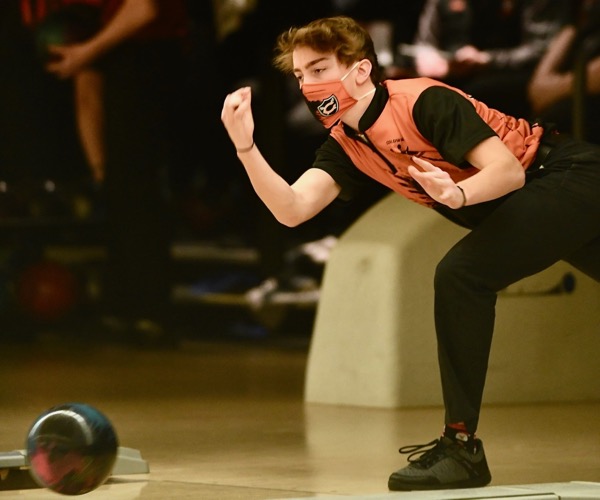 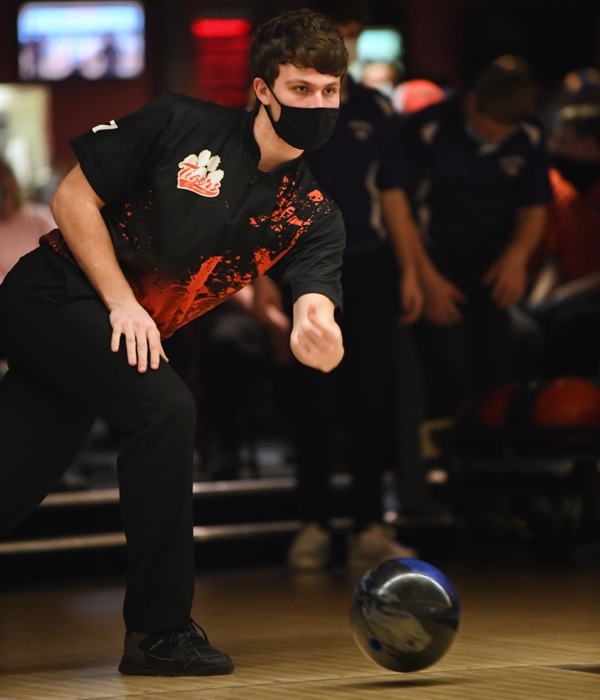 A starting running back for the Tigers, Landon Henry rolled a 241 and 238 Saturday at Community Lanes. (Press Pros Feature Photos)