What Would Woody Think…If He Were Here Now?

To a response received pertaining to this week’s ‘Reader Speaks’ column, it raised a wonderful question about former Ohio State football coach Woody Hayes.  What would he think…if he were here today?

If you didn’t see, there were different emotions over the characterization of Hayes in Mark Znidar’s recent post, and photo of the incident from the 1978 Gator Bowl game – his attacking a Clemson player in a fit of rage at a point in the game where things were going decidedly against the Buckeyes.

Some suggested that we could have remembered Hayes in a more respectful characterization than that represented by the black and white image we used.  “Sensationalism”, one wrote.

Others pointed to the well-known legacy of Hayes being a multi-dimensional, eclectic individual.

“He was a teacher. He was a friend. He was a cheerleader for the ill and a lighthouse for the lost. He was all things great men can be. He was also controlling, quick-tempered, and, at times, irrational,”  shared writer Mike Beacon in a tribute to Hayes in 2013.

Which is pretty much what I discovered when I would meet him face-to-face in the hallways of Stradley Hall dormitory, where I lived back in 1972…and when I took his class on ‘coaching’ in a cold, ill-heated room at St. John Arena during winter quarter that year.  What I found was that Hayes didn’t discriminate.  He held everyone, regardless of circumstance, responsible for their own future and success.  “Why would you waste the opportunity to get an Ohio State education?”  he was fond of saying.  And he meant it.

So to respond to Blankenship’s rhetorical question when he asked, “I wonder what Woody would think if he were here now?”  I think I know. 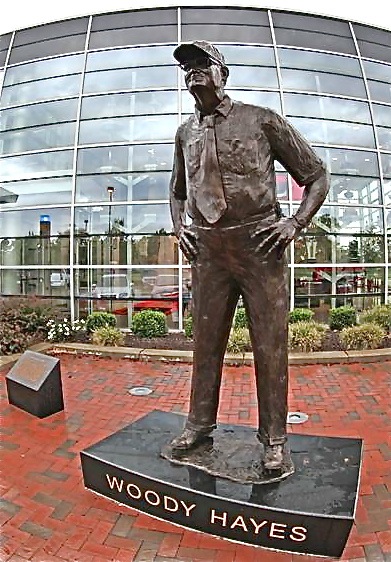 Teacher, a cheerleader for the ill and a lighthouse for the lost, Hayes would say, “Why would you waste the opportunity to get an Ohio State education?”

When I signed up for winter quarter that year I needed a one-hour class to round out my schedule.  Being a baseball player at Ohio State, my advisor brought it to my attention that Woody was teaching a class on ‘coaching’ at St. John at 8 am, two days a week.  I jumped at the chance, if for no other reason than curiosity.

Actually, the subject of ‘coaching’ was loosely addressed, because you never knew what Hayes would talk about on a given day.  You only knew that he’d be the first one in the room, and he took the time as seriously as if you were sitting in a five-hour chemistry course.  He talked about everything from finance to foreign policy, but his message regarding anything he talked about was personal responsibility.  If he did talk about coaching it wasn’t X’s and O’s.  Rather, it was the opportunity to motivate, stress the importance of paying forward, and to share the message that anyone can be better tomorrow than they are today…if they just work harder.

I remember there were a few football players in that class, some that rarely saw the field on Saturdays…and that Hayes didn’t hesitate to make them an example.  “You were recruited here because someone believed you could play for Ohio State,”  he’d say in that controlling tone of his.  “And if you’re not playing as much as you’d like it’s your choice, and yours alone.”  I wrote that down in my class notes, and I still have it 48 years later. And imagine a teacher saying that now. 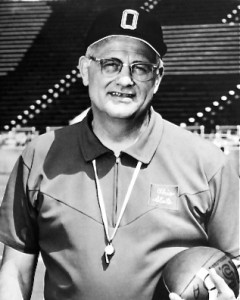 From my notes:  “If you want to be respected…if you want an opportunity…and if you want things to improve you’d better get to work. There’s no quick fix. Make yourself something to be respected and there’s no question that you’ll get your opportunity.  And you’d better be ready for it, because dammit…that’s how the world works.  And don’t complain about it being fair.  Hell, there’s nothing fair about football.  You just outwork the other guy.”

And then he’d take off his glasses and look some unsuspecting soul right in the eye. “And that’s how it’s always worked – from Julius Caesar to John D. Rockefeller,”  he said one day.

No one ever questioned.  No one dared,  and you could hear a pin drop.  And at the end of every class Woody would meet you as you left.  If you weren’t a football player he’d make it a point to ask your major, where you were from, and if you were involved with any university activities.  His point in asking?

To drive home the point…that if you get an Ohio State education you’re on course for a better future.  And you’d better be ready, dammit…because that’s how the world works.

I was so impressed by his personality and command that I tried to sign up the following year…to sit in his class again.  But it wasn’t offered – not enough interest – my advisor told me.  Disappointed then, it makes perfect sense fifty years later.  People don’t change, and Woody spoke truth in a manner that most didn’t want to hear, even back then.  But I know from having been there he’d be saying it today.

“Get to work and make yourself better.”

That’s how the world works.