Hit Me With Your Best Shot… Tipp Survives Upset Bid…

Tippecanoe is 8-0 after Saturday, and this one wasn’t easy.  A clutch effort from behind the arc in the fourth quarter helped the Red Devils stay unbeaten against Sidney.

SIDNEY- Sidney hit Tippecanoe with its best shot on Saturday.
But the Red Devils had enough big shots in them to stay unbeaten.
Tipp knocked down six 3-pointers in the fourth quarter — including a trio by Gavin Garlitz — as it rallied from an 11-point second-half deficit to knock off Sidney, 71-68.

“I am just so happy with how we responded,” Tipp coach Adam Toohey said. “This was definitely the closest one we’ve had this year, and we needed to get a really good run from somebody, and it’s tough with teams being in and out (due to the COVID-19 pandemic).  But coming back from being down 11 in the third, it feels really good.”

Tipp (8-0) hadn’t been in that position all season.
The previous closest game for Tipp entering Saturday was a 15-point win over Butler earlier this week. The Red Devils, ranked seventh in the latest Division II Associated Press state poll, were averaging a victory margin of nearly 30 points.

They have Garlitz, offensive rebounding and clutch free throw shooting to thank for their latest victory. 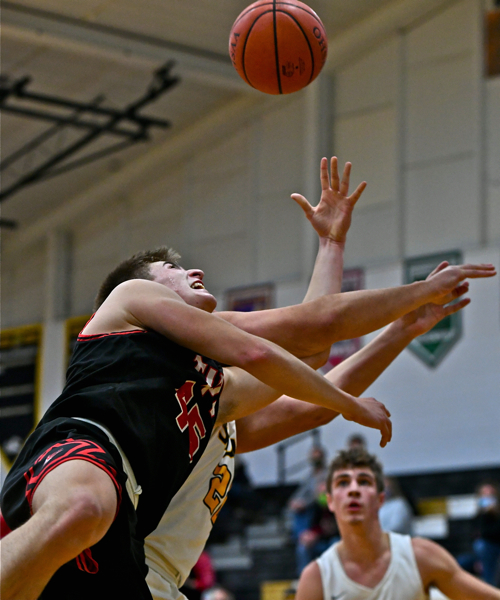 Tipp trailed by six near the midway point of the fourth and didn’t make a single 2-point shot in the quarter. It didn’t matter.

Garlitz entered the game a 43% shooter from 3-point range. He couldn’t miss in the fourth quarter. The junior tied the score for the first time since halftime when he hit his third triple of the frame with 1:55 to play.
“I felt like we were just playing too slow, not physical enough,” Garlitz said. “I just felt like someone had to get us going. Once I hit that first 3 and then that second one, we just kept heating up and getting more physical. And it went on from there.”
Sidney’s Avante Martin converted a 3-point play the next trip down. However, Zach Frederick buried a corner-pocket 3 to tie it when Tipp got back the ball.
Tipp’s Stanley Clyne later split a pair of free throws to break a 66-all tie.  Frederick grabbed an offensive rebound off Clyne’s miss, went to the line and made both to extend its lead to 69-66.

On Sidney’s next possession, Camden Vordemark drove for a hoop with 39 seconds left. Tipp’s Ben Knostman couldn’t connect on a pair of free throws with 21 seconds remaining, but Griffin Caldwell grabbed an offensive rebound, went to the charity stripe and made two freebies. Sidney saw both its final two 3-point tries miss iron. 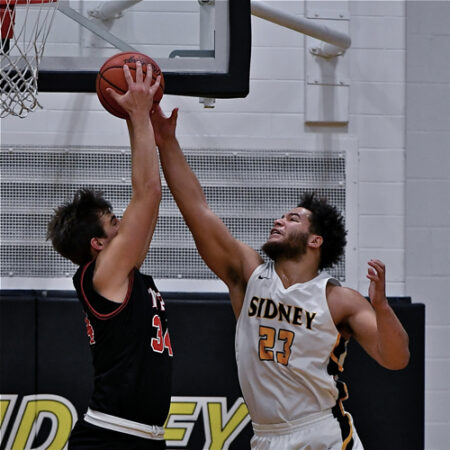 “They’re good, I mean, that’s why they’re undefeated and one of the best teams in the state,” Sidney coach John Willoughby said. “But I think this just goes to show you how good we can be, too.  But they are hard to defend, especially when you’re as tall as they are and still can handle the ball, pass the ball well and shoot from the perimeter. That makes it doubly guard them.
“We battled well all game,” he added. “We rebounded well all game and then we couldn’t get a rebound off a missed free throw. But the whole game, I thought we competed. That was good to see.”
The game began like many of Tipp’s previous blowout wins.

The Red Devils opened with an 11-2 run…scoring 11 straight over a three-minute period after the Yellow Jackets’ initial bucket. Gabe Dean had all seven of his points in the first quarter, with Frederick adding five. Willoughby called a timeout with 3:59 left in the frame and his team trailing by nine.  And things soon got much better for Sidney.

The Yellow Jackets closed the quarter with a 12-3 run to level the score. Cedric Johnson finished with half of Sidney’s 14 points, while Vordemark pitched in five.
The first half featured four ties and 12 lead changes. Twelve different players scored, and fittingly, the game was knotted at 32-apiece at halftime.
But Sidney took a 42-32 lead exactly two minutes into the third quarter, thanks to big offensive efforts by Devin Taborn, Martin and Vordemark. 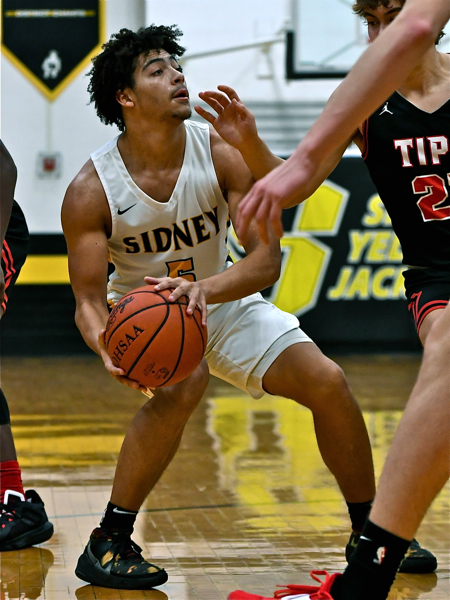 Devin Taborn looks for a teammate – someone, anyone – to pass to.

Tipp turned up its defensive pressure, though. Sidney finished the third quarter with a couple of turnovers, rushed shots and an offensive foul. The shots started falling for the Devils, who trimmed the deficit to 50-47 by quarter’s end.
“Anytime you have turnovers and take poor shots, it doesn’t matter who you are playing against, it keeps teams in the game or allows teams to back in,” Willoughby said. “But I’m not going to complain about that. I thought, for the most part, our kids made the best decisions they could in that situation. Tipp’s a good team. They’re going to get a lot of hands on balls, and you’ve got to be precise and quick on your decision making. Once you get mentally tired, it’s tough to compete against something like that.”

“Kudos to them, man,” Tipp’s coach added. “I was talking to somebody after the Butler game, and I mentioned West Carrollton and some of the best teams in our league and I didn’t mention (Sidney). Shoot, they’re good. That’s the best shot we’ve got all year, that’s what I’ll say. They definitely played really well tonight. (Coach Willoughby) has got them going.”

Garlitz and Frederick each scored 14 for the Red Devils. Knostman added 12.
Vordemark had a game-high 18 points for Sidney. Avante Martin was right behind with 17, while Devin Taborn added 12.
Tipp is in the MVL driver’s seat after taking Sidney’s best shot. The Red Devils will look for their ninth win when Piqua visits on Friday. 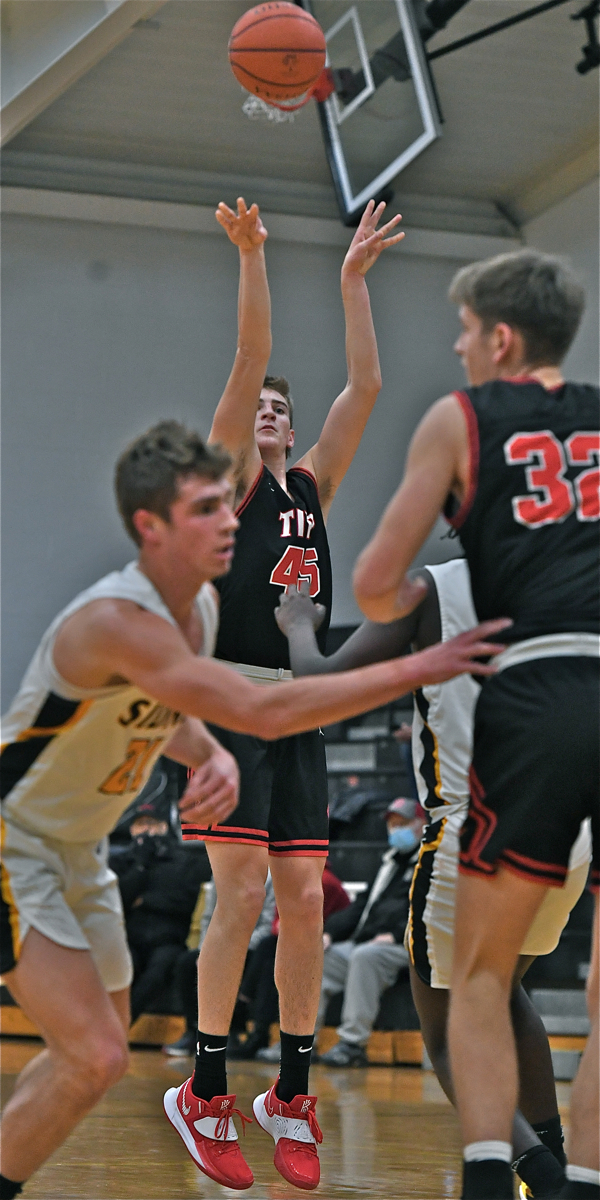 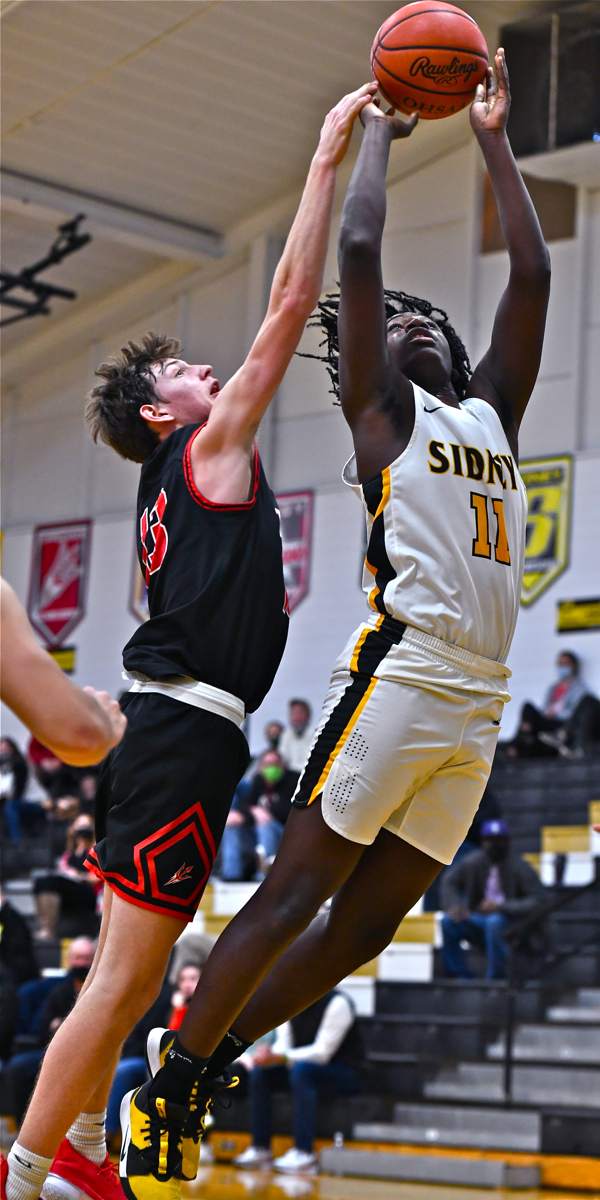