The holiday gatherings might have been subdued, but the holiday responses to Press Pros content were as strong as ever.  Here are some of the best…on priority of content, support for hunting, the future of sports and Covid, and Woody slugging that player from Clemson in the 1978 Gator Bowl.  Thanks again, and enjoy.

“While I enjoy reading about Ohio State and the University of Dayton, I would also enjoy reading about area high school basketball and it seems as if you’ve made that less a priority. Are you not covering as many games as you have in previous years. Just wondering.” … James Gesseman 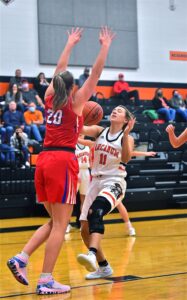 (Ed. Note: We would remind you that the high school basketball season is long, that the month of December is very busy because of the holidays, and yes, the Buckeyes and Flyers have played a more predictable schedule. We’ve also lost some high school games due to Covid cancellations. That said, however, we compared to December 2019 and we’re actually four high school games ahead of last year. And if your concern is girls basketball…so far this year – Fort Loramie (twice), Arcanum (once), Tri-Village (once), Minster (twice), New Bremen (once), Marion Local (twice), and Anna (once)…and that’s just in December.)

We’ve always included content on the outdoors, hunting and fishing since the days of our late friend and contributor Jim Morris, and here’s the reason why.

“To Press Pros from a former hunter, I want to express how much I appreciate the recent stories about pheasant hunting. I’m 84 years old now, can’t go out myself anymore, but when I could it was a true joy in my life. I will add that I taught all five kids, including my daughter, how to shoot growing up.  It was an important lesson in safety and responsibility, as you wrote about. I know others object to guns and hunting, but there are those of us who don’t and we thank you for some wonderful memories.” … Raymond Adams ( formerly of Dayton, via Facebook)

(Ed. Note: Ray, I know that Jim Morris would have enjoyed your words, and we plan on continuing our outdoors coverage through the support of Olde English Outfitters (Tipp City) and our newest writer, Jim Abrams. Enjoy that panhandle sunshine.)

The topic of Covid and its impact on our lives and even sports has been a consistent topic on Press Pros throughout the fall season. Some write that they appreciate our writing about it. Others say they wish we would never bring it up. And some tell us that we have the facts all wrong that we post.

“It’s hard for me to believe that schools with sports traditions don’t have the means or the commitment to continue playing football and basketball in 2021 just because they lost revenue in 2020.  And even if they did it’s hard to accept the priority of sports over public safety.  .oo8% may be a small percentage, but 300,000 lives are not.  If you believe that I think we can do without football and basketball for a while.”  … Jas. Meisner

“You have frequently mentioned that some high schools will be in jeopardy of having sports next year because of Covid and the state’s restrictions on attendance and budgets. I’m writing to ask you for some clarification on this matter, your sources, and if you REALLY believe that. And please quit with the drama. There’s enough of that already.” … George Zerkle

(Ed. Note: For the sake of clarification, a lot of smaller districts rely on ticket sales for football and basketball to enhance their athletic budgets. In those rural parts of Ohio where there aren’t as many people this is a reality and fact of life. As for the sources you request, the people who live there and support those schools know the math. They only played six football games this fall and average attendance was about 200 at many Division VI and VII schools. So instead of taking in $10,000 a night (tickets and concessions), or $50,000 for the season, they took in $2,000, and maybe $10,000. Because of restricted basketball attendance, the same scenario means that instead of taking in $50,000 for 22 home basketball games (boys and girls) they may take in $20,000. And more than one has told me that there isn’t enough space in the district’s budget to make up the difference. So a 60% cut in revenue for sports is kinda’ dramatic, don’t you think? And apparently, no concern there from our boy, Mike DeWine.)

There’s always someone who prefers the scarlet side of being a Buckeye fan, as if the dark gray side has never existed. Such was this response from a reader regarding the history of the Ohio State-Clemson game, and the painful fact of how Woody Hayes’ career ended on a regrettable note.

“While it may be true, I was disappointed that you sensationalized the photo of Coach Hayes in the ’78 Gator Bowl game.  Lack of class from Press Pros, and I won’t read again.” …. Jeff Tensi

(Ed. Note: If you’re still maintaining a Woody shrine after all these years I understand your feelings. But there must be a lot of moments missing in your collection because he had a few that could be considered ‘regrettable’.)

“Excellent article on the history of Ohio State vs. Clemson. Interesting to compare the change in times, and how soon we forgive and forget. Woody Hayes is a respected figure to this day with statues in his honor.” … Jas. O’Neal

“I remember watching that game and seeing Woody go after the Clemson player and I wondered if the **** wasn’t about to hit the fan.  It cost him his job, but made him more popular and respected than ever.  Anything goes with Ohio State football.”  … Marvin Fletcher (Columbus)

(Ed. Note: There are a lot of statues of historical figures out there that we wouldn’t build anymore, including a lot of coaches. But if this helps…there doesn’t seem to be the support for punching players and throwing chairs like there used to be.) 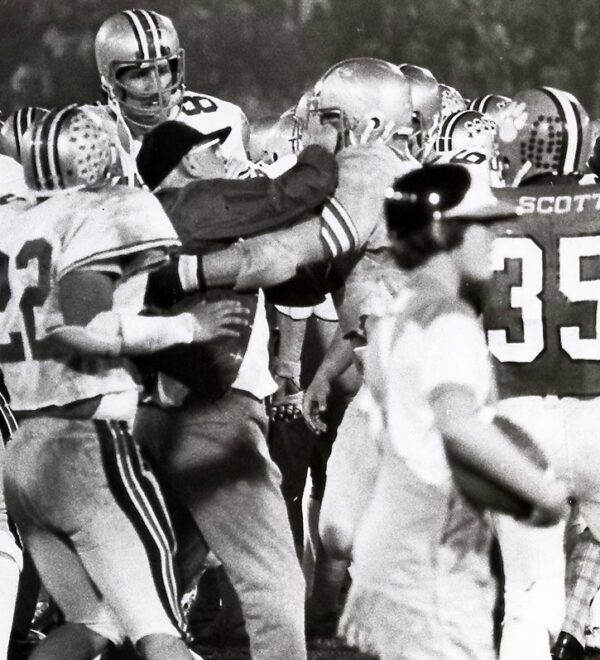 “While it may be true, I was disappointed that you sensationalized the photo of Coach Hayes in the ’78 Gator Bowl game. Regrettable. Lack of class from Press Pros, and I won’t read again.”