Michigan couldn’t play because of Covid.  Clemson’s Dabo Swinney says the Buckeyes aren’t worthy.  And there’s talk that Florida could jump Ohio State if they they beat Alabama.  None of it matters to Ryan Day.  Saturday is ‘game day’ – THE ‘game day’!

Columbus – There was so much to digest for Ohio State going into the weekend without even playing a football game that counted that it was enough to get a coach or player’s stomach burning and churning like a bad post-practice burrito.

There was no game against Michigan on Saturday because the Wolverines were COVID-19 infested. That hadn’t happened since 1917.

Clemson coach Dabo Swinney said the Buckeyes weren’t worthy of the College Football Playoff because they had played five games when other teams were bearing down on playing a full season or close to it.

Then there was talk that Florida could jump Ohio State in the rankings with a victory over Alabama in the SEC championship game.

Let’s not forget the fallout from the Big Ten making the Buckeyes (5-0) look to be spoiled rotten children by voting to do away with the six-game regular-season minimum and thus sending them into the conference championship game against Northwestern (7-2) at noon on Saturday at Lucas Oil Stadium in Indianapolis.

The Buckeyes, like most winners, are process-driven and made it through those stupefying 48 hours with nary a burp.

Not playing Michigan was just another disappointment for a team that has been gangster-slapped by bad news since March.

“That’s something we’ve become really good about,’’ coach Ryan Day said. “I think if this was something where it happened last year, everything was going normal and this game got cancelled, it would probably take a lot longer to recover from. But we’re actually getting used to receiving bad news and having to move on quickly. I think we’ve become hardened to that as a team.’’

Millions of people were stunned when the Big Ten rescinded the six-game rule. What shows how ridiculous that rule really was is the fact that Ohio State could have lost to Michigan and still qualified for the Big Ten championship game by playing a sixth game.

Swinney talked on and on during The Rich Eisen Show about how the Buckeyes didn’t have the body of work to be considered for the CFP and that the committee should take a closer look at Texas A&M and Florida.

“If I was on a committee, it would be hard for me to leave out a 10-1 Texas A&M or an 11-game Florida team over a team that has played six games,” Swinney said. 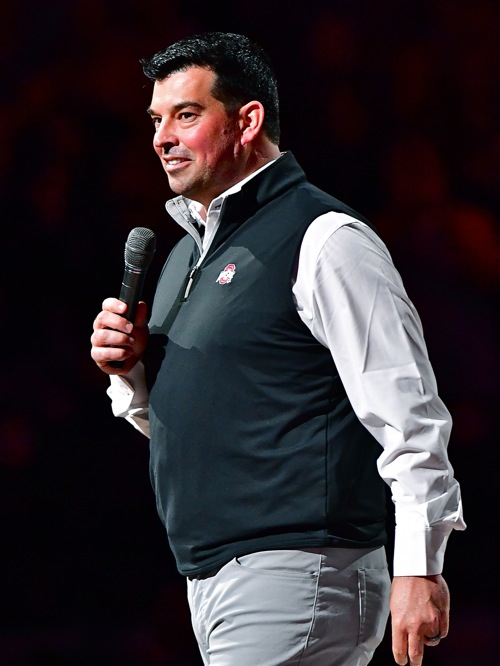 “We’re actually getting used to receiving bad news and having to move on quickly. I think we’ve become hardened to that as a team.’’  –  Ryan Day

One of his teams proceeded to crap out when sixth-ranked Florida went down to LSU on a 57-yard field into the fog with 23 seconds to go. The scoring drive was kept alive when, incredibly, Marco Wilson threw the cleat of Kole Taylor up the field after he had made what looked to be a game-saving tackle on third down.

Day pointed out that college football is the only team sport that he knows that uses style points to select its best teams for the CFP.

“Especially with this unique season,’’ he said of the selection process. “It goes against everything that we were brought up with. I thought about it the other day, I don’t think there’s any other sport in the world where anything other than winning matters. So, it’s very, very unique that way. Just winning is what matters in every sport. If you win every game in the NFL by one point, you go undefeated and you win the Super Bowl. That’s all that matters. But college football is different and this year it’s even more strange. But all we’re going to do is worry about winning.’’

That’s where the team’s process comes into play. Since taking over for Urban Meyer last season, he has talked only about the next game.

This has been a season in which the Buckeyes could have trouble staying in any type of rhythm. They have played every other week since mid-November.

When they almost blew a four-touchdown lead in a 42-35 victory over Indiana on November 14, they had to wait an extra week to work on their shortcomings in the second half in a 52-12 win at Michigan State.

“All we’re going to do is worry about winning and doing the best we can taking it one play at a time,’’ Day said. “I talked to the team about that this week. If we start to go into a game and try to do anything other than just win one play at a time, you can get yourself sideways. We’ll just focus on that, one play at a time, and then at the end of the game, we’ll look up and see where we’re at.”

With Florida losing and Texas A&M having that ugly wort of a 52-24 loss to top-ranked Alabama on its record, Ohio State should make the CFP semifinals by defeating Northwestern for its fourth straight Big Ten championship. 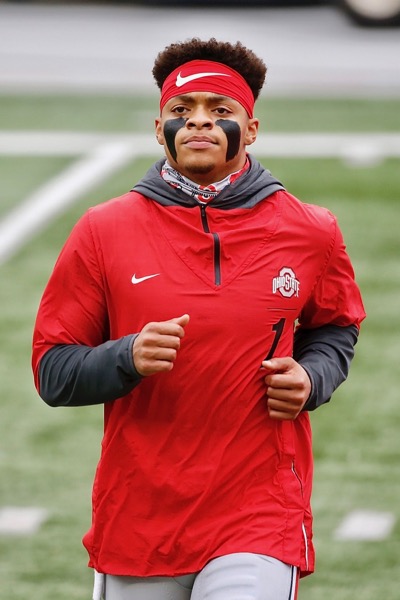 “I think we’re in the top four best teams in the country, for sure, and I think we control our destiny.”  – Justin Fields

The Buckeyes handled the Wildcats 34-21 in last season’s title game. They are a 20-point favorite this time.

What about critics taking shots at his team?

Alabama is No. 1, followed by Notre Dame, Clemson and Ohio State.

“I won’t get caught up in the emotion of it all,’’ Day said.

“I think we’re in the top four best teams in the country, for sure, and I think we control our destiny,” Fields said. “If we go out there on Saturday and handle business where we’re supposed to, I think we should be where we want to be.”

Defensive lineman Jonathon Cooper waited for more than a year to play Michigan after missing all but four games in 2019. He’s a fifth-year senior captain.

He still would have relished a shot at getting another gold pants medallion playing the Wolverines in an empty Ohio Stadium.

On Saturday, he settled for practice and going home to watch the Northwestern-Illinois game on television.

Cooper also watched “some parts’’ of the Florida-LSU game.

“That was something, wasn’t it, when he threw that shoe?’’ he said. “I don’t think that game changed anything else for our players.’’

That’s what Fields said earlier in the Zoom conference. The Buckeyes, he said, are practicing and playing games when virus protocols say they can play. They have had games against Maryland, Illinois and Michigan cancelled.

“At the end of the day, those people that are saying those things, they don’t make the decision that we go to the College Football Playoff,” Fields said.

There appears to be great news for Ohio State with regard to at least three players being able to return from positive virus tests or contact tracing.

Asked about the availability of those players, Day said, “I am going to plead the fifth on that.’’

But Fields let it slip that center Josh Myers and offensive tackles Thayer Munford and Nick Petit-Frere are back at practice.

“Seeing my guy Josh Myers, Nick Petit and Thayer back, I miss those guys a lot,’’ he said. “I texted them before we played Michigan State last week and told them that I missed them a lot. It’s just great to see them back in the building.’’