Winners of four boys state titles in bowling, Coldwater and coach Rick Hartings are loaded and eager to repeat in 2021.

New Bremen, OH – The seven returning members of last year’s state title bowling team in Coldwater have coach Rick Hartings confident, if not a bit over the top, about their chances to repeat in Division II come the last weekend in February.

“We lost one member of last year’s team – Michael Schoenherr – but with Keaton Bruns returning and a strong cast of kids who contributed to last year’s team we should be in very good shape.”

If you’re not aware – if you haven’t followed bowling on Press Pros for the past two seasons – it’s a high school sport on a meteoric rise in both participation and popularity.

And Bruns has made the most of it, having bowled a 300 last season on the way to the Cavaliers’ eighth overall bowling title (boys and girls).  Their success is so surprising for the short of amount of time that bowling has been an OHSAA sport that the word ‘dynasty’ is hardly out of the question.

“Bowling is a big thing in our community, and I can’t think of another school community in the OHSAA with so many titles,”  says Hartings.  “It’s popular at Beavercreek, Centerville and Vandalia Butler – schools that have won a couple of state titles – but we have eight now and that’s pretty special.”

Armed and ready to defend, the Cavalies handily defeated Parkway in Saturday’s league play – 2751 to 1893.  That on a morning when Brandon Hammons, Carter Bertke, Trent Berkenstock, Nathan Snook, Caleb Sutherin and Bruns hardly had their best day.  Speedway Lanes, while being a community gem in New Bremen, gives up high scores grudgingly. 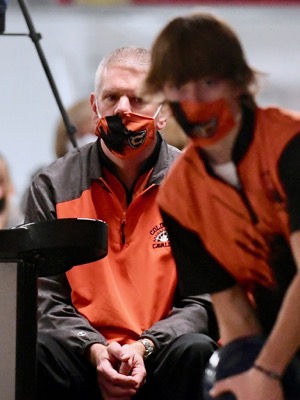 The man behind it all…Coach Rick Hartings keeps a watchful eye on boys and girls bowling at Coldwater.

“We only graduated the one last year,”  adds Hartings.  “So Carter Bertke has moved up as a freshman and it’s pretty exciting to get started again with those guys coming back from last year with that kind of added experience.  The expectations are high, because they are every year, but it should be fun.”

Bowling success at Coldwater exists in the shadow of the more publicized sports of football (seven state titles, including the recent win over New Middletown Springfield), and baseball (seven titles there, as well).

“Chip (Otten)….what he’s done [in football] is pretty awesome because every year he comes up with a game plan and a coaching staff that seems to make for a pretty special season.

It is the newest sport sanctioned by the MAC, with eight competing teams on Saturday, and support to the point of having every available ticket allocated to the participants accounted for in terms of attendance.

“It’s pretty amazing,”  concludes Hartings.  “It’s easy to overlook its popularity because it’s taken a while to get here.  But Sidney won the boys title in Division I last year, we’re certainly not done at Coldwater, and I would expect the sport to continue to grow in league popularity.”

As a side note…the popular PBA tour event in Coldwater, come August, is tentatively on to return in 2021 – another reason by bowling is such a big deal for the number of opportunities to come out to Pla-Mor Lanes and see that there’s life, and a lot of it, in the sport beyond high school.

But right now the fun is in trying to win number five.  And nothing says fun like a dynasty! 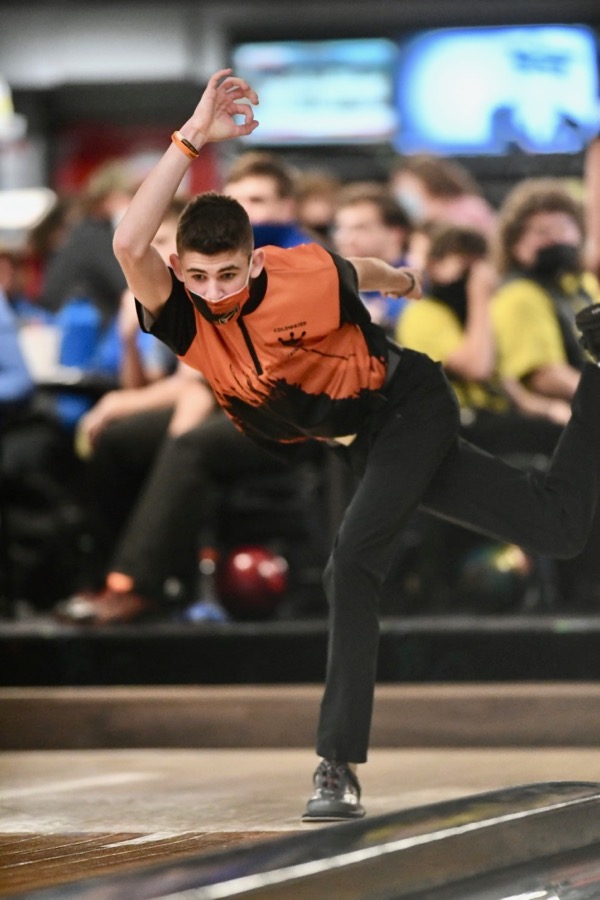 Sophomore Keaton Bruns leads the defending champion in search of a repeat in 2021, and Coldwater's fifth boys title in bowling.