Not playing the Big Game means Buckeyes are not eligible for Big Ten championship game against Northwestern because conference requires at least six game be played.  So…now what?

Columbus – The situation appeared to be as fluid as oil percolating inside a top fuel dragster after a quarter-mile run when the University of Michigan sports information department sent out a blurb 50 minutes beforehand that football coach Jim Harbaugh was not going to hold a scheduled news conference at noon Tuesday.

Something was brewing, and it didn’t smell right.

Harbaugh’s weekly get-together on Zoom with the news media already had been pushed back one day.

About three hours later, the university announced through a statement by athletic director Warde Manuel that the annual Ohio State-Michigan game would be cancelled because of, what else, COVID-19 infections within the program.

This will be the first season The Big Game will not be played since 1917, or when the United States entered World War I. The Buckeyes were favored by 30 points to win their ninth straight game in the series.

“We were not cleared to participate in practice (Tuesday) by our medical staff and we were looking at, in terms of, by the end of week, much wouldn’t have changed and we still don’t have a total grasp of this virus on our team,” Manuel said during a news conference that began at 4 p.m.  “The medical staff felt that we would not be able to participate Saturday, and so to afford Ohio State and the Big Ten conference the ability to adjust where necessary, we felt it was best to talk to Kevin Warren and Gene Smith and let them know our decision today.”

The university’s chief medical officer Darryl Conway said the program has not exceeded the thresholds of the “red-red zone” of 5 percent within the team and 7.5 percent within the community that includes support personnel such as trainers, equipment managers, etc. But he said there is an expectation of more positive tests.

The Detroit Free Press said two sources have said 40 Wolverines would not have been able to play because of infections.

The cancellation means the Buckeyes might have lost their chance to play in the Big Ten championship game against Northwestern on December 19 in Lucas Oil Stadium because they have not played at least six games the conference requires for eligibility.

At the moment, Indiana (6-1) would be the East Division champion going against Northwestern (5-1) of the West in the championship game.

There are questions whether the Hoosiers will play an eighth regular-season game after pausing activities Tuesday after an outbreak. Purdue, their opponent in the Old Oaken Bucket game, cancelled practice because of results of its testing.

The virus has caused a huge mess with the conference schedule.

The Buckeyes lost a game against Maryland on November 14 when the Terrapins had to cancel because it surpassed the thresholds of COVID-19 infections. A second game was not played when Ohio State had to cancel against Illinois two weeks ago when the virus hit its camp.

A possible scenario that could get Ohio State (5-0) into the title game is conference athletic directors voting to rescind the six-game minimum rule. Commissioner Kevin Warren has said the Big Ten has to be flexible during this pandemic.

The big picture for Ohio State is the College Football Playoff. Committee chairman Gary Barta said last week that a team not playing a full schedule was a problem.

Ohio State is ranked fourth for the final spot in the playoffs behind No. 1 Alabama, No. 2 Notre Dame and No. 3 Clemson. Texas A&M is fifth and Florida sixth.

Manuel said Ohio State deserves a chance to qualify for the CFP, saying it “should not be punished” by the conference’s scheduling rules. He said the Big Ten “would be open to having a discussion” about the merits of having his hated rival play in the title game.

Every Big Ten university would take a financial hit should the Buckeyes be excluded from the playoffs for not playing enough games because they share in the profits.

Wisconsin athletic director Barry Alvarez, who brought the university’s football team from the dregs to national prominence, said three days ago that the six-game rule should be rescinded in order for the Buckeyes to play for the Big Ten championship.

“I would think that if something would happen to Ohio State and they’d have to cancel another game, that’s something that we’ve got to revisit,” he said.

Buckeyes coach Ryan Day also is on board with that thinking.

“I think it’s one of those things that was put into place early on, and decisions are made based on the information you have at the time, and then things change as we know,” Day said. “So there have been a lot of changes, and I just think we have to take a hard look periodically at all this stuff. And I think this is one of those situations. And if we don’t quite get the games we need to get into the championship game, then I think that needs to be looked at hard, just like anybody else in the conference. But there’s no easy solution in times like this. So I know those guys are going to come together and take a hard look at it and make sure that it was the right decision.”

The Big Game was in doubt as early as last week at this time when the Wolverines game against Maryland at Michigan Stadium last Saturday was cancelled.

Harbaugh and his staff conducted a “limited’’ practice Monday, and that gave Day the belief that all things pointed toward the game being kicked off at noon Saturday at Ohio Stadium.

“Everything we’re hearing is that we’re playing the game,’’ he said.

“We’re preparing for the team up north,’’ he said. “We’re not planning for anybody else.’’

Asked about a possible cancellation before Michigan’s announcement, defensive coordinator Kerry Coombs didn’t want to think about such a scenario.

“I don’t want to go there because I got sick to my stomach when you said that,” Coombs said. “This game has been part of my life since I was 5 years old. We all want to play this game. This game means a lot.”

Now, the Buckeyes won’t have a shot at defeating their most hated rival a ninth straight season. 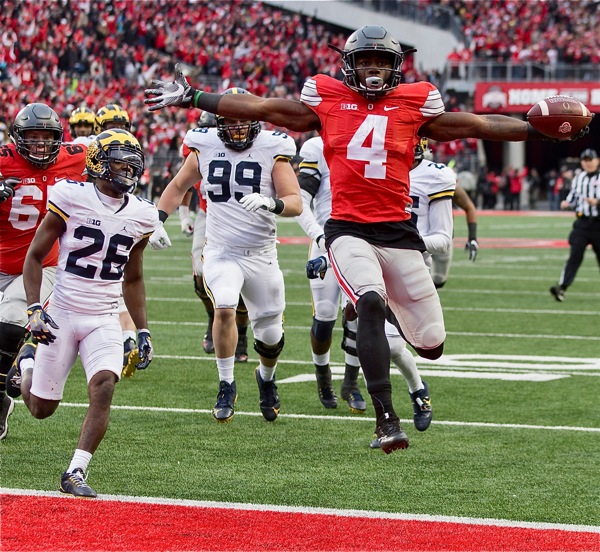 “We have not been cleared to participate in practice at this time. Unfortunately, we will not be able to field a team due to COVID-19 positives and the associated quarantining required of close-contact individuals. This decision is disappointing for our team and coaches but their health and safety is paramount, and it will always come first in our decision-making.” Michigan AD Warde Manuel