Cappell: The Best Shotgun Shell Ever Made….

They haven’t been available for years, and their absence signaled the beginning of the end in my confidence for the Winchester ammo brand.  But for those who remember the Super X Mark 5 shell…there’s no question they were the best that’s ever been made.

(Ed. Note:  Veteran writer Tom Cappell has contributed to Press Pros now for the past five seasons, but recently announced his retirement, sure to be missed by a market of loyal readers nation-wide.  A resident of Missouri, he’s written for nearly every popular outdoors publication in America, and his insights on hunting and preservation of our natural resources are always appreciated.  Speaking for area hunters and outdoorsmen, we’ve appreciated the time Tom has dedicated to Press Pros Magazine.)

By Tom Cappell for Press Pros

Sometime in the early 80s I was driving home one spring weekend from Memphis, Tennessee back to Columbia, Missouri when I stopped at an interstate combo gas station/general store to gas up and get a Coke.

It was one of those charming mom and pop stops that you don’t see anymore.  Had everything – hardware, and even live bait and a minnow tank – and a shelf full of ammunition ranging from .22s to .30 caliber, and up to .270.  And low and behold, stacked up with a ‘sale’ sign were about a dozen boxes of the original plastic Winchester Super X Mark 5 shotgun shells.

Now if that doesn’t ring a bell for you you’re not a veteran hunter.  A product designed by Winchester CEO John Olin back in the 60s – and branded under both the Western and Winchester name –  it was the first plastic shotgun shell with a plastic collar wrapped around the shot charge to prevent pellet deformation and to facilitate better patterns.  The Mark 5 was a revolutionary breakthrough in shotgun ammunition, promising better patterns, less damage to gun barrels, and safe to use in the worst weather possible.  They were totally water-proof.

I bought all twelve boxes of them, #5 and #6 shot, and when I handed the clerk my credit card he asked, “I have more of those shells of you want them.  Been trying to get rid of them.”

“Probably three or four cases,”  he said.  “Don’t sell that much shotgun ammo any more.  Mostly deer hunting round here, so if you want them you can have ’em for 8 bucks a box.”

I walked out of there with 72 boxes of shotgun shells and a $500 Visa bill, but I’ve been smiling ever since.  And here’s why.

A few years later I was driving up to Des Moines, Iowa to meet friends and pheasant hunt, and while I did my best to check the list twice – three times – when I got to Des Moines I discovered had packed everything BUT shotgun shells.

“Not a problem,”  said a buddy who knew the area.  “There’s an outdoors store at the mall and they’ll fix you up.”

And they did, however since I hadn’t bought shotguns shells for a while, I noticed that the Winchester Super X shells I’d used since boyhood were now lighter, different, cheaper looking.  But they WERE Winchesters, and I bought three boxes confidently.

The next morning we walked a brushy creek bank that ran through a hundred-acre CRP field and soon began flushing roosters.  It was cold – about freezing – and I carried my prized Parker 12 gauge that I’d shot so many ringnecks with over the years.  It was loaded with those new Super X shells.  Within minutes a bird burst from beneath my feet and angled up and to the right, the perfect opening shot to a great day afield.  I tracked it, pulled the front trigger, and at the boom of the Parker that pheasant tucked its head and cart-wheeled end over end. 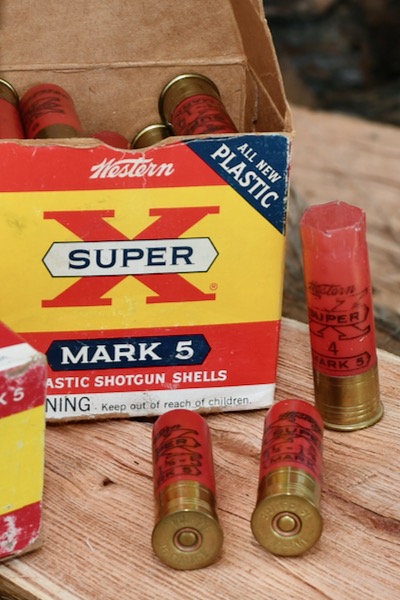 But when I broke my gun open for the shell to eject I heard a loud snapping sound, like the ejector was trying to work…but it didn’t.  Because of the cold temperature, and the condensation in the barrel when the shell fired, the lighter, thinner Super X plastic casing had stuck to the chamber wall and the spring that worked the ejector had broken in its effort to kick out the shell.

Later, after the hunting trip and drive home, my gunsmith confirmed that I had indeed broken a spring, and that I was out $300 for a repair.

It taught me a lesson, for sure, and since that trip I’ve never forgotten to pack shotgun shells again.  I’ve also become very selective, and knowledgeable., if I have to buy.

But it hasn’t been often.  I’ve used those old Super X shells that I’ve hoarded for years and never once since have I had another incident.  The bottom line:  They just don’t make them today like they used to (you ever hear that before?). Those old Winchester, Remington and Federal shells were constructed of much heavier plastics back then, with actual brass, and were absolutely as good as the company’s advertising promised them to be.

In addition, they patterned better – not tighter, but better – than the later ‘power piston’ shot cups that completely insulated the pellet charge from the gun barrel.  The older guns were what some of us called ‘over-bored’ – modified and full chokes made to shoot much tighter patterns with old paper shells.

But when you combine them with new, modern ammunition they actually shoot like a slug gun.  Improved cylinder shot like modified.  Modified shot like full.  And full choke busted up birds so badly you didn’t bother to clean them unless you were good enough to be a head shooter.

To adapt, modern guns have been made with choke tubes for the past thirty years.  Modern shells are made 3 inches and longer now to affect even greater range.  And today a box of modern, efficient shells costs upwards of $20 a box.

But still…I’m using those old Super X Mark 5 shells from the 70s, and I’m shooting them in the vintage guns of my youth with which I learned to hunt rabbits, pheasants and quail.  Kept dry and cool, they never age.  I’m down to about twenty boxes as I write this – I don’t shoot as much as I once did – and I’m pretty sure I’ll never run out.

And I’m also sure there’ll never be shotguns shells made better than the Super X that John Olin demanded to be the best of its time.  It was. 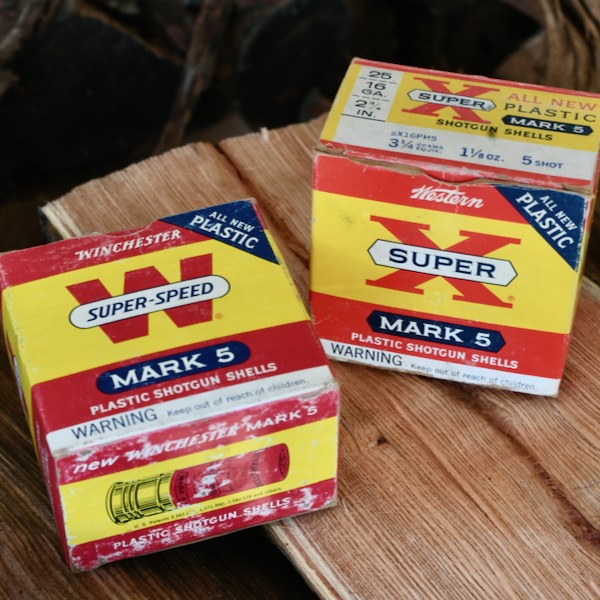 Originally the innovation of Winchester CEO John Olin as the perfect shotshell for his Model 21 double barrel, the Super X Mark 5 became the first 'modern' plastic shotshell in the early 60s.